That afternoon we went ashore on the mainland to visit an abandoned Soviet-era Cold War site. It was a sobering experience, especially since we were in Russia at a time of heightening tensions reminiscent of the bad old days. After our time ashore we were back into the Zodiacs for some more cruising and bird-watching. 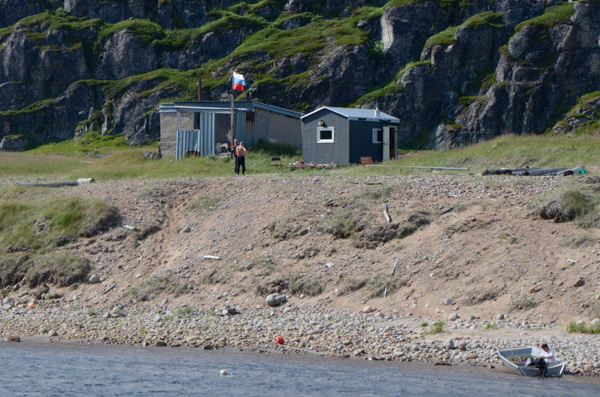 The shore where we landed is at the base of the Harlovka River, which is reputed to be one of the best sport fishing rivers in northern Russia. It is the site of this small border station. Presumably their primary purpose is to prevent poaching.

The two guards invited the entire ship for a BBQ! (Our leaders declined the invitation with thanks.) Later, as we returned from our afternoon cruises, we saw that the guards had come out to visit the ship. They appeared to have been celebrating a bit too much and were struggling with their boat. A couple of our Zodiacs escorted them back safely. 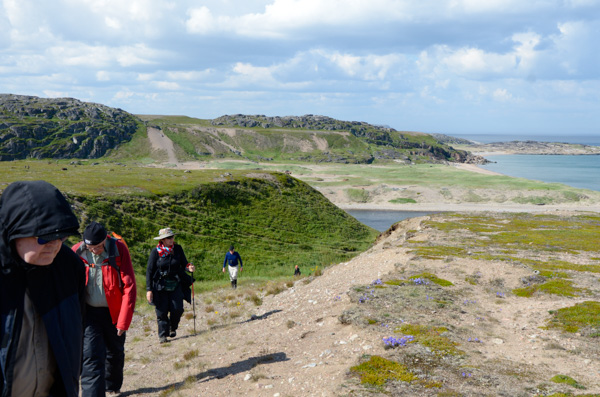 The abandoned site was a stiff hike up from the river. As on the Kanin Peninsula there were very many beautiful and exotic plants. When I get more time, I'll put them online as well. 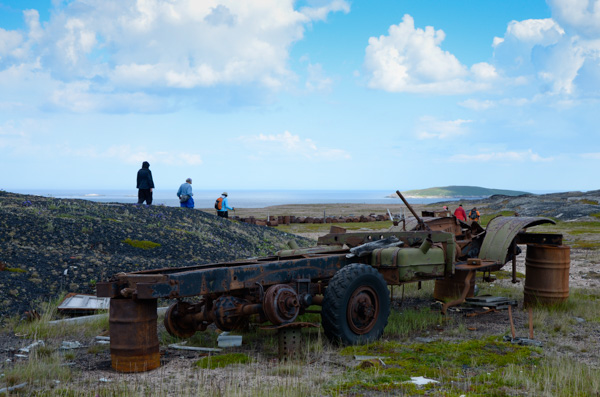 The area was littered with abandoned machinery of all kinds. There were also numerous coal dumps, like the one shown here, and hundreds of oil barrels. I don't know if the barrels still had oil. I expect at least some of them did.

This vehicle has been stripped of everything that was worth carrying away. 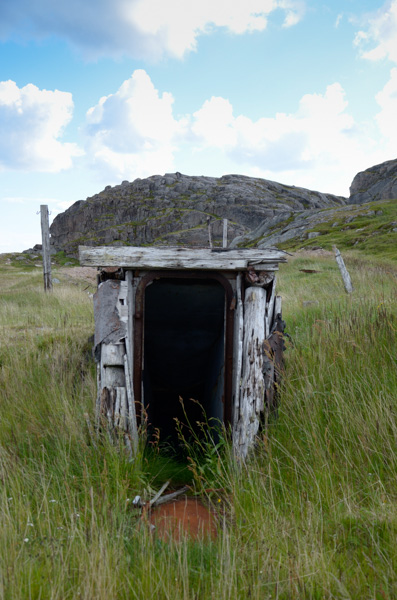 There were also numerous underground installations. I don't know if quarters were built underground for protection from the weather or if they were intended to serve as some kind of "fallout" shelter. 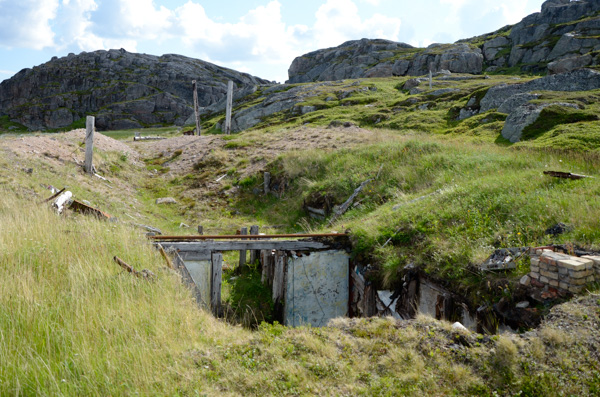 Most of the underground structures had collapsed. 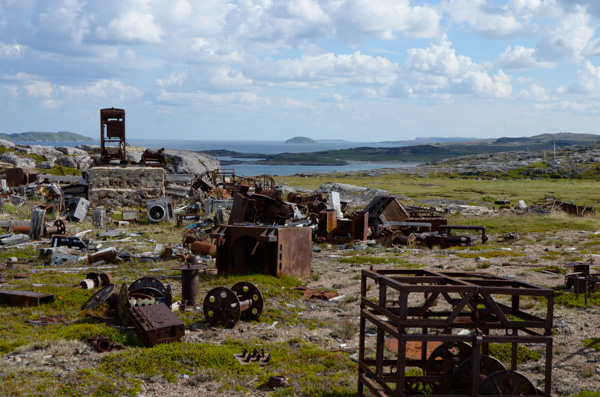 Much of the detritus included electronic equipment that was probably outdated when the place was abandoned even if it was state-of-the art when the camp was created in the early 50s. The station was staffed into the 1990s according to our trip materials. 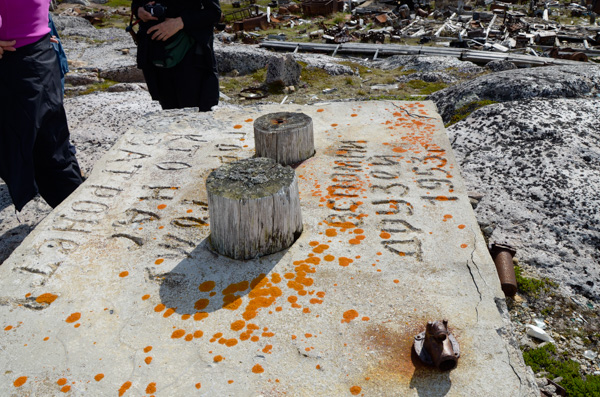 This concrete base, which can be seen in the picture above, has an inscription that one of our Russian-speakers translated roughly as "do not forget us, friends!" 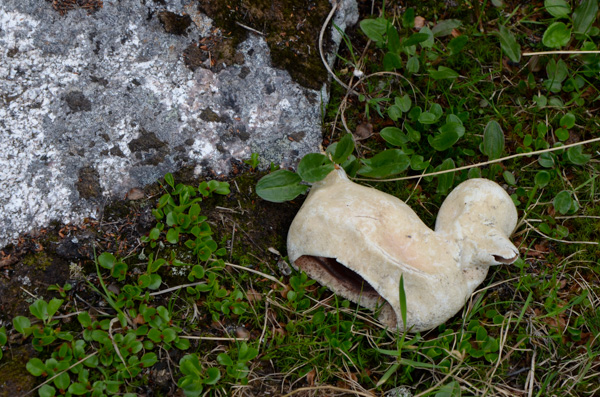 I was beginning to be overwhelmed by the grimness, when I saw this abandoned rubber ducky.

It was evocative. Did the men stationed here bring their families? Was this little toy a mascot of some sort? One of my work groups had a rubber chicken that was passed around to commemorate monumental "oops" moments.

I wondered what stories the ducky could tell.

Yet, the surroundings were very beautiful in an austere way -- at least in mid-summer. The far cove had a herd of reindeer.

Later we visited that cove and a few reindeer remain. We speculated about what drew them there. Our best guess was that the sea functions as a kind of "salt lick" for them.

Later research indicates that this may in fact be the case. Salt is not otherwise plentiful in reindeer country. 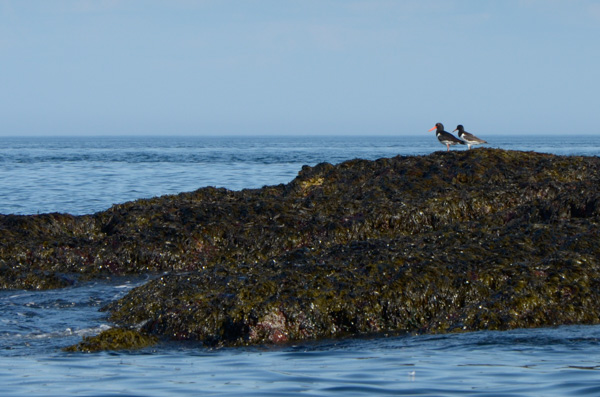 For our afternoon cruise we went to some different islands in the neighborhood and saw some new birds. These are oystercatchers. 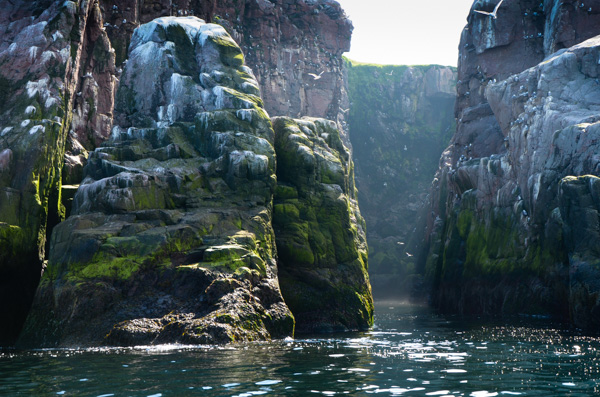 Our Zodiac cruised into this eerie cleft of the island. 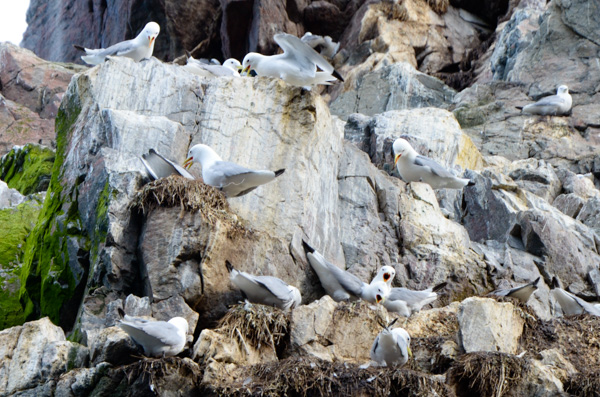 It housed a very noisy colony of kittiwakes: 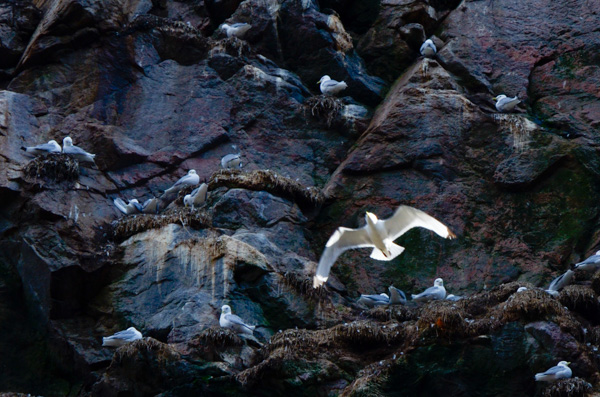 Birds were constantly flying hither and thither. The admonition of not looking up with your mouth open was apt. 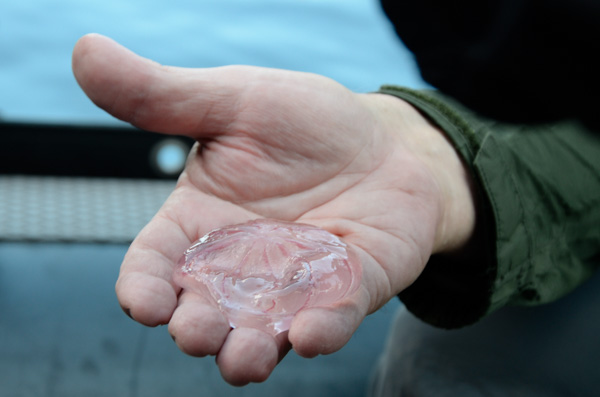 Not all the wildlife was avian. Our Zodiac driver spied this jellyfish and scooped it out of the water for us to see. It had a lovely delicate pattern. Where I grew up all jellyfish had stingers so I cringed a bit.

The jellyfish wasn't injured by being displayed and was soon returned to the sea. 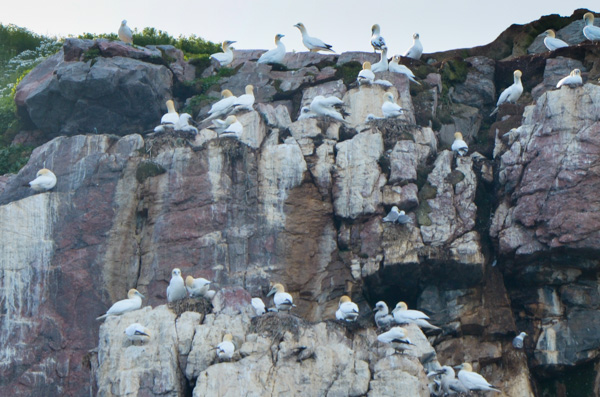 There was also a nearby colony of gannets.

One of our explorers (with a loooong telephoto lens) was able to get a wonderful picture of two birds "billing," which is their greeting gesture.

Our staff were concerned that there were so few visible chicks. I can count only six in this picture plus one juvenile bird. The chicks are just beginning to fledge. There didn't appear to be large numbers of kittiwake chicks either, although I saw some juveniles. 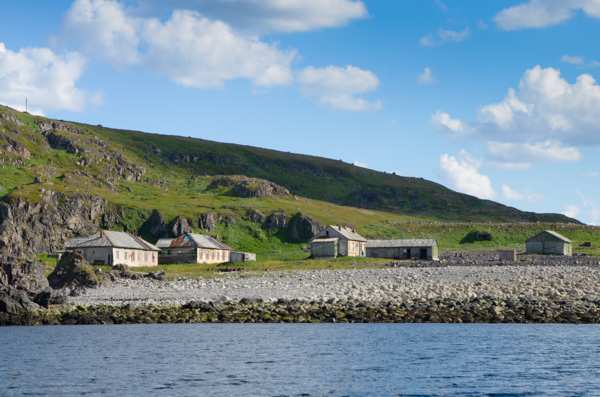 Farther along the same island we came to the research station. It is active and I saw at least one human walking around. I hope they were less lonely than the border patrol officers!

Elsewhere on the island we saw ladders leading to the nesting areas. I suspect they were used to access the birds for banding or other forms of study. 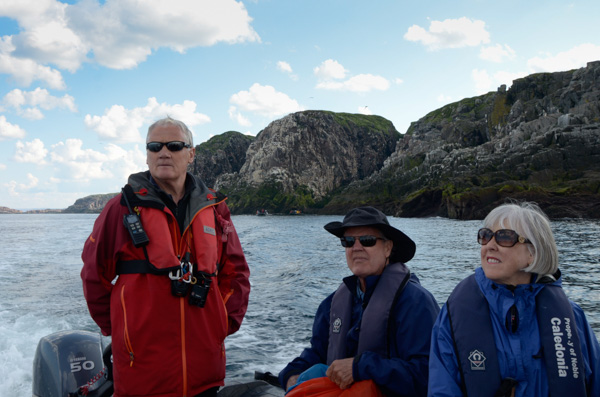 After viewing the birds, our Zodiac driver Rick Price cranked up the motor and we flew back to the ship! I caught this picture before we took off. After we got going I was too busy keeping my camera dry, my hat on, and my rear glued to the Zodiac.