After our visit to the Kanin peninsula, we crossed the mouth of the White Sea overnight to reach our next destination along the Murman Coast of Russia, the northern side of the Kola Peninsula. That crossing featured the only rough seas that we encountered and I COULDN'T FIND MY PATCHES! Oh well, what's a little seasickness if it's only for one night. I had been eating too much anyway. By the next morning we were back in calm waters again and anchored among the Sem Islands. "Sem" means "seven" in Russian. Although I didn't count them, I'm betting there were seven islands in this archipelago.

The islands are a nature preserve and we weren't allowed to land on them although there is a research station on one that houses a scientific team. The seabird colonies have been studied extensively since the 1930s. We spent the morning cruising around the islands in our Zodiacs. We saw countless birds, several whales, two or three seals, and some reported seeing dolphins, although I did not. 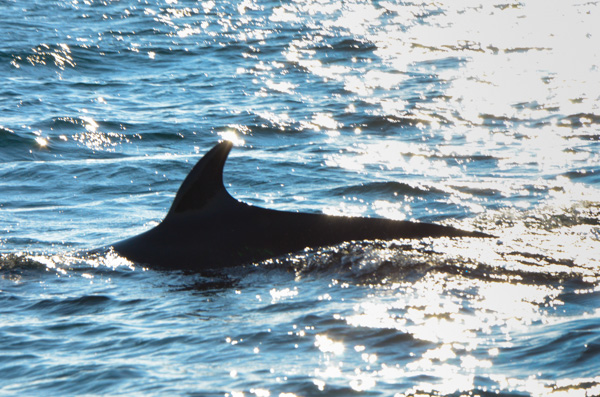 Soon after leaving the ship we attracted the attention of a pair of Minke Whales. They were very curious and hung out with us for a while. 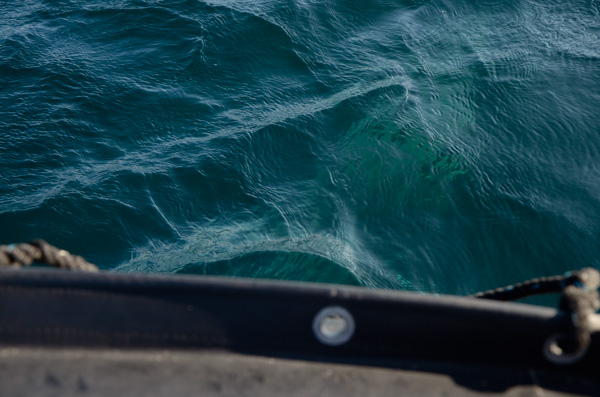 It's hard to see, but the lighter area of the water is the whale passing underneath our Zodiac. Although they are small by whale standards, the Minke is still about 27 feet long on average -- far larger than our boats. It could easily have flipped us out.

I am indebted to one of our fellow travelers who traded seats with me in the Zodiac so that I could get better pictures. 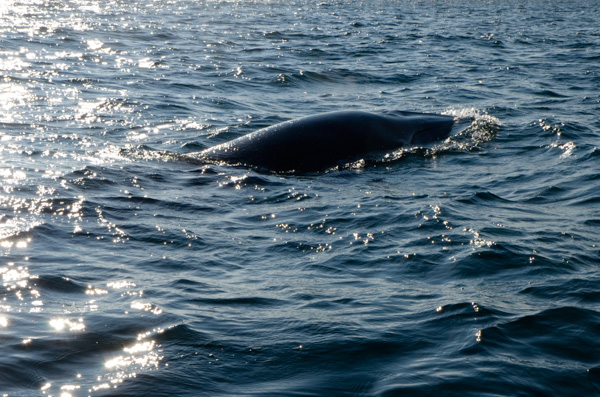 One of the whales has come to the surface and is giving us the once-over.

We reluctantly bid farewell to the whales since there was still much to see in these islands. Later in the day we glimpsed another whale, but it was much shyer and didn't approach us. 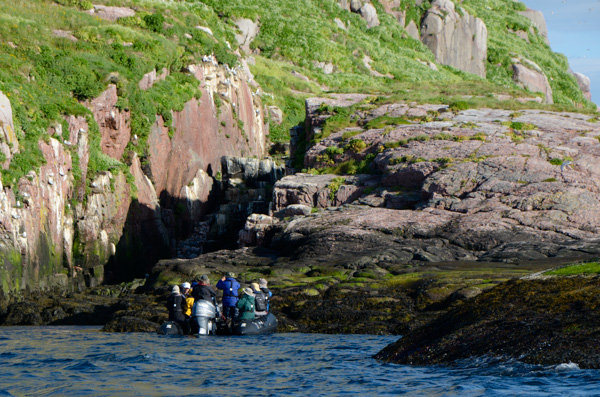 This eroded cleft between two harder rock types was home to many kittiwake nests. 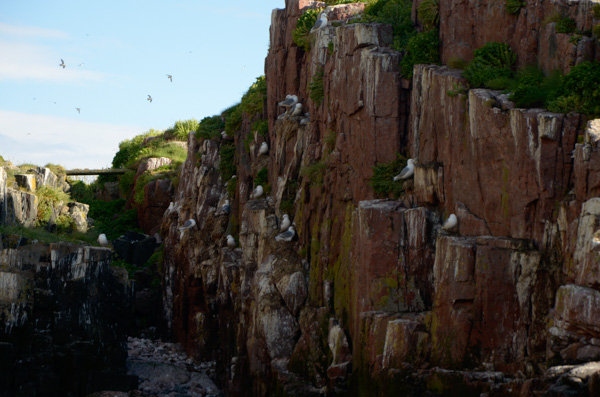 The birds have set up housekeeping on every available ledge. 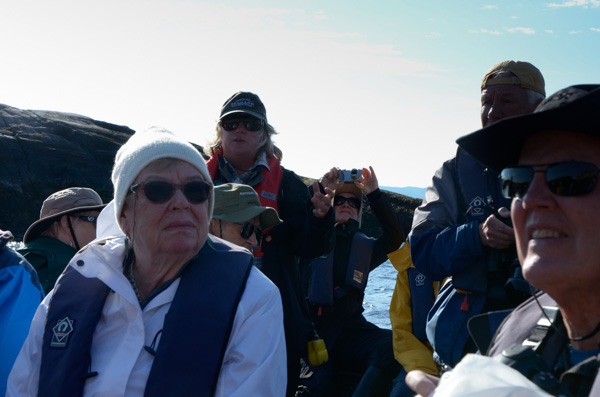 The lady in the white cap is the one who so graciously let me take her prime picture-taking seat. Her name is Connie Howes. Thank you, Connie!

The woman in the center of the picture wearing the orange life-vest is another of our expedition staff, Hannah Lawson. She was the liaison with Noble Caledonia, the ship's operators. 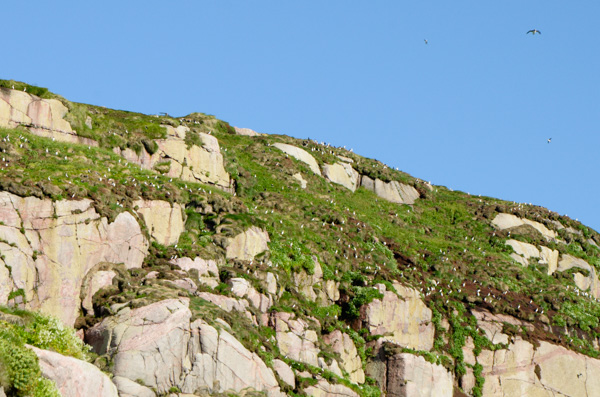 On an earlier visit to Scotland we had visited an island with puffin nests. At that time I was only able to get pictures of the birds on the water and they looked about as distinct as these here at their nests.

I was luckier on this trip and got to see many in the water. Even so most of my pictures show the back side of a puffin flying away!

The birds nest in the ground high above the water.

I almost envied our fellow travelers with loooong telephoto lenses, but I didn't bring the telephoto lens that I have because of its awkwardness, so I can't imagine I would have the patience to lug around an even bigger one. 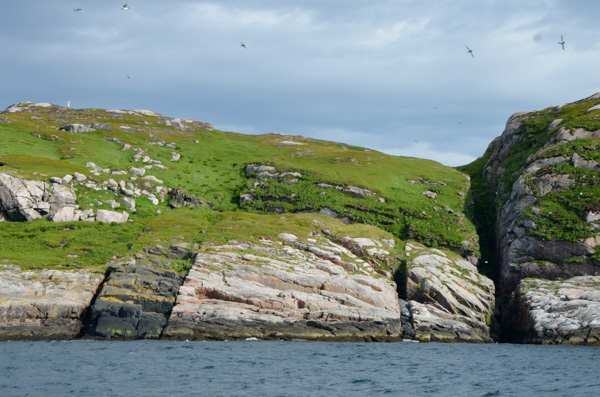 As I recall the dark fissures are called "pipes," and they indicate newer and hotter rocks upwelling into older structures. Our geologist felt that these cracks were as old as the continent itself and could be considered "stretch marks" as the land expanded. 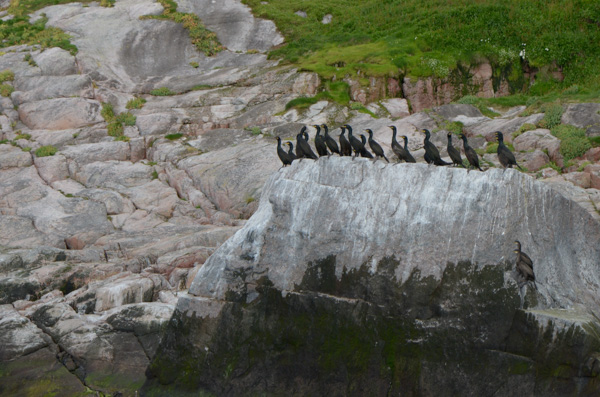 This group of cormorants or shags allowed us to get quite close. Whenever our Zodiacs approached birds, we were very careful to do so quietly to minimize the disturbance. 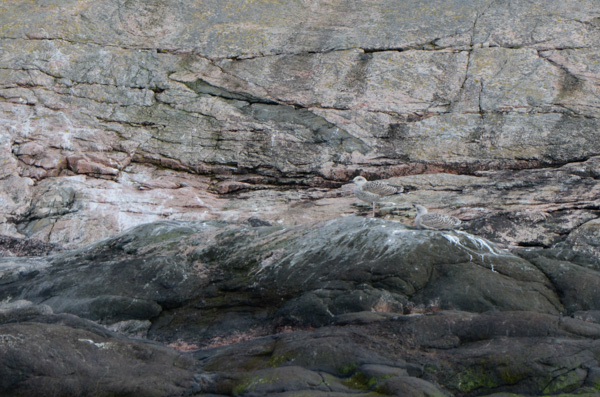 Juvenile gulls are colored to match their surroundings for protection. This is a good example of how that might work. Can you find the two gulls?

When they become adults their plumage develops striking patterns. 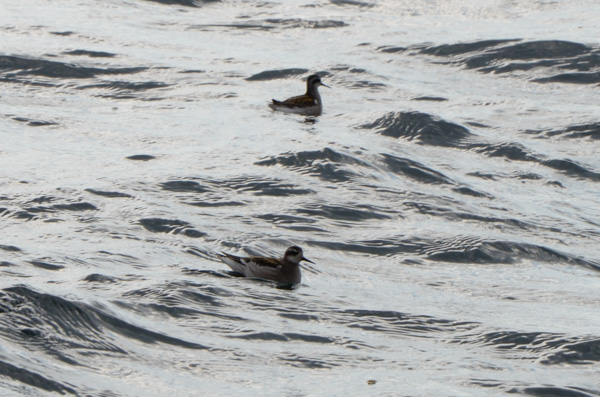 Most of the birds were pretty shy, but these little guys came right up to the Zodiacs. They are phalaropes and are quite tiny.

We saw at least two species of seal. When I get more time I'll try to look them up. This was as close as we could get to them. I never saw any hauled out on shore.