The next morning's excursion was to Shoyna, a village on the Kanin Peninsula. Due to destruction of the nearby sea floor vegetation due to poor fishing practices, the sea sand is drifting onshore and engulfing the village. Perhaps because of this destabilization, the ocean is too shallow in the area of the village to enable the ship to get very close to shore. As a result the Zodiac ride to the village was over three miles on a very brisk and windy day. We decided to pass, but those who went said it was very interesting.

After the morning's excursion, we headed to the northern cape of the peninsula. This was my favorite shore excursion of the entire trip. There was little to see but wind-swept tundra, but the plant life was abundant and fascinating. 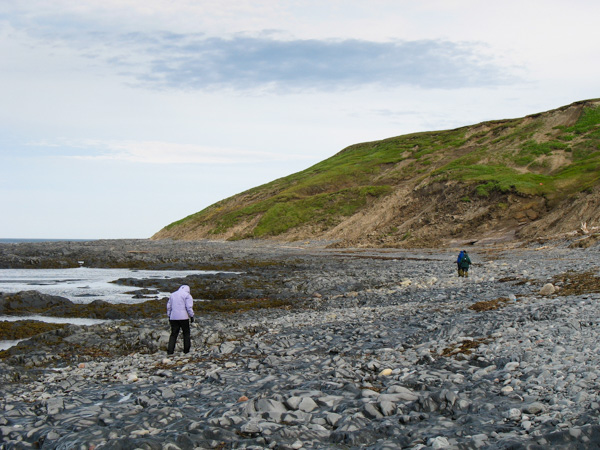 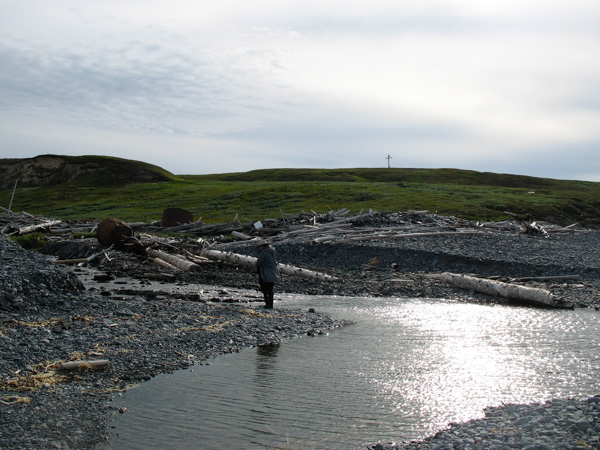 A small stream came down to the beach and cut through a driftwood dam. The large cross on the hill was dedicated to the explorers and seamen of the Russian north. 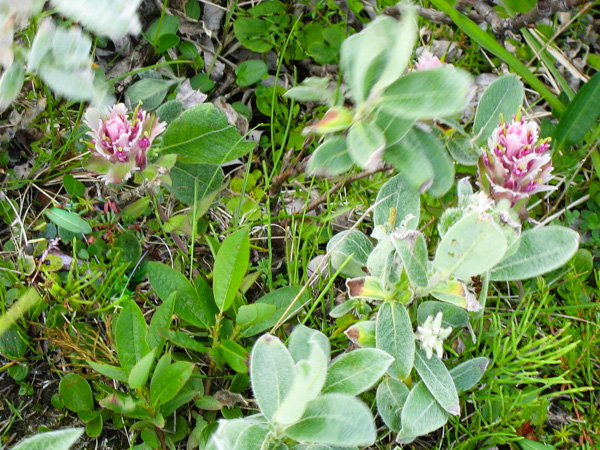 I have not been able to identify this flower. Our naturalist was also unable to tell me what it might be. We saw similar flowers elsewhere along the Arctic coast.

The reason the light-colored leaves are blurred is the fierce wind. It was hard to stand and I had to take many of my pictures kneeling down.

These plants are only a few inches high. 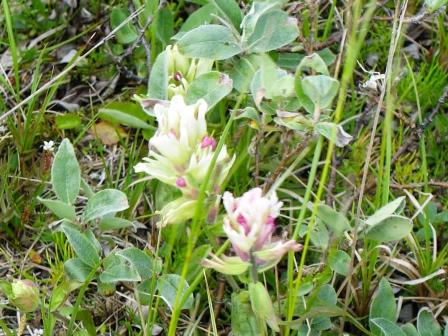 Another of the mystery flower. This pair is lighter in color. 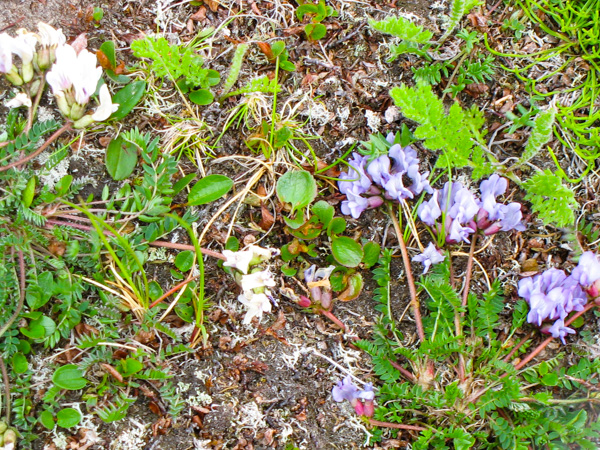 This unusual flower, which comes in white and blue, appears to be a relative of Oxytropis deflexa, commonly known as locoweed. 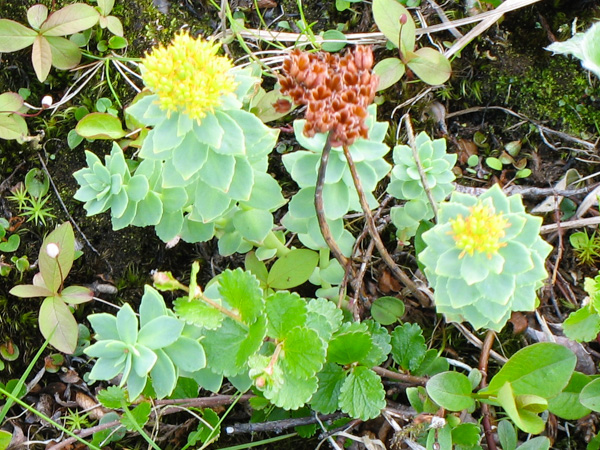 I believe the yellow flowers are Rhodiola Rosea commonly called Roseroot or Golden Root. It has many medicinal uses. 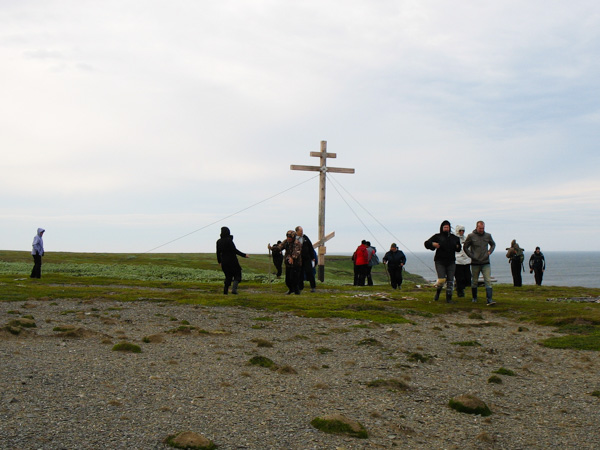 The cross was constructed in 2013. Many of the group walked up to see it.

The serious guywires indicate the severity of the winds this monument is expected to handle. I'm sure that what we encountered was pretty normal. 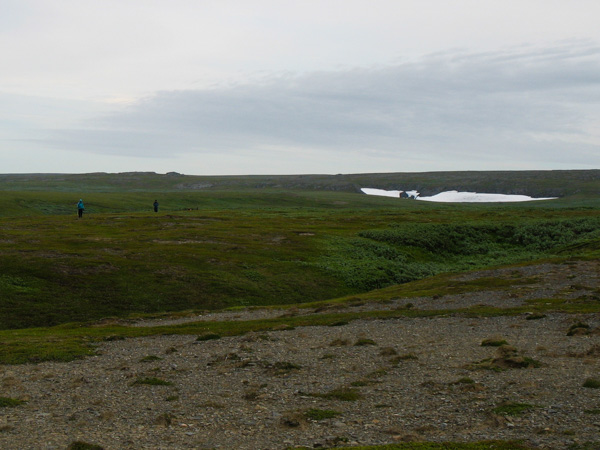 As I recall, this was the only snow that we saw on our landings in Russia. It is July 31.

To the casual observer the land looks bleak and barren. Appearances can be deceiving! 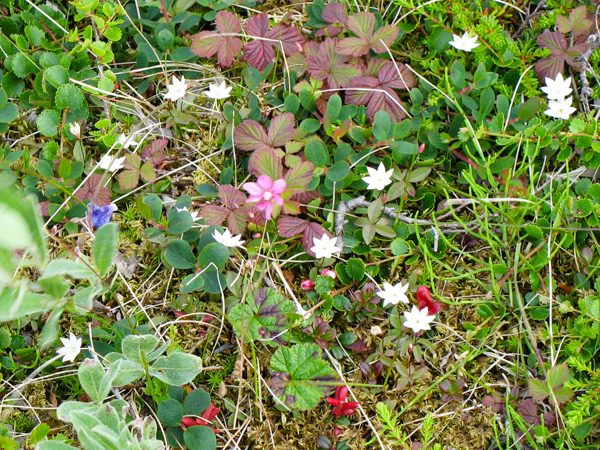 The desolate-looking landscape is anything but. This one picture shows many different plants - none taller than a few inches. There are four different types of flower: white, blue and two different pinks. (The bright red appears to be leaves rather than flowers.)

Then there are what appear to be wild strawberry (purplish) and cloudberry leaves (mottled green). There is no fruit to be seen, however. Perhaps someone or something has already gobbled it up.

Finally there are at least five additional foliage plants including the moss. 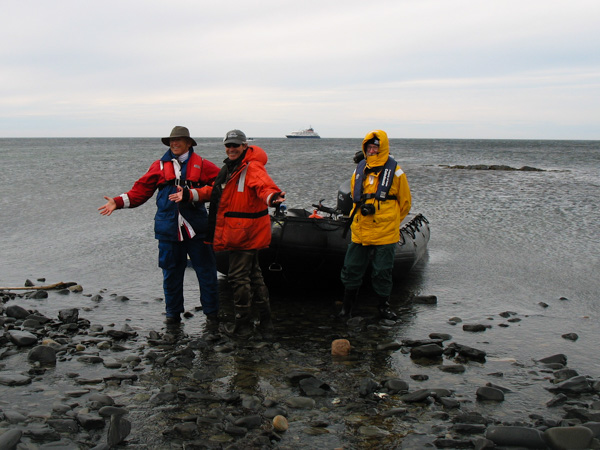 I could have stayed much longer, but we had to return to the ship. Here are more of our expedition staff: Jeff Gneiser (L) and leader Mike Messick (C) with one of our fellow explorers.

Jeff often had a mini-cam on his Zodiac taking pictures for his kids back home in Key Largo -- a far cry from the Arctic!