The next morning we were on our way out of the White Sea. Our goals for today were on or near the Kanin Peninsula, which separates the White Sea from the Barents Sea. Our first stop was supposed to be Sosnovetskiy Island off the west coast of the peninsula, but the administration of the island had been transferred to the Defense Ministry. Although we had letters of permission from the president and others in the current administration, we were still denied access. So we headed north for our next destination.

During our voyage, David Holloway gave one of the most enlightening lectures of the trip. The topic was the Soviet Submarine Fleet. Among other things he discussed how close the world had come to nuclear war during the Cuban Missile Crisis. A group of submarines equipped with nuclear torpedoes was intercepted on its way to Cuba by the U.S. Navy. One of them resisted and the U.S. ships used dummy depth charges to force the sub to surface. The captain ordered deployment of the nuclear warhead, but all three senior officers had to agree. One held out. (David screened parts of the PBS Secrets of the Dead "The Man Who Saved the World" docudrama on the event and it was easy to tell which was the good guy because he was really good looking!) The real-life hero of the event was Vasili Arkhipov.

David quibbled with the specifics of the docudrama, which was more "drama" than "docu," but his talk enlightened us about the Cold War and a narrowly diverted disaster. 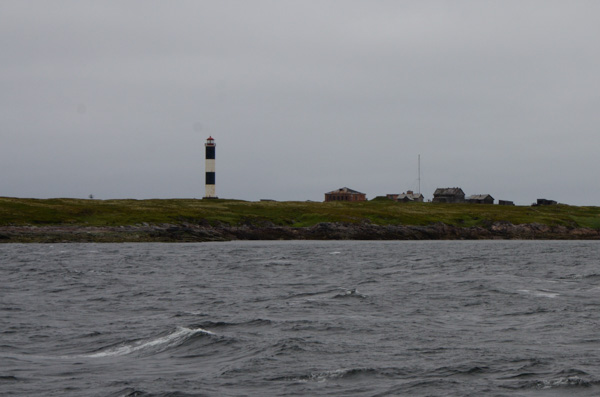 This is as close as we got to our planned landing on Sosnovetskiy Island. 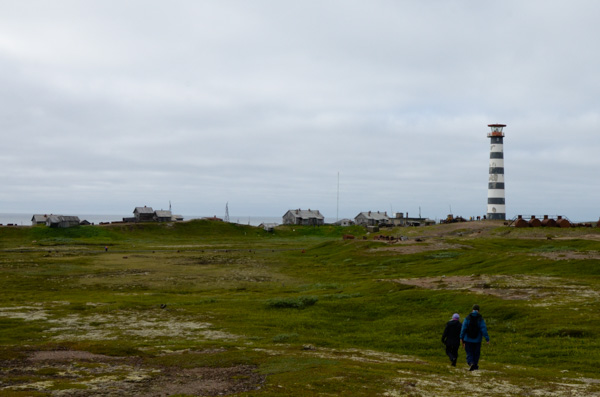 We could land and explore Morzhovets Island and its lighthouse though.

This barren-seeming island is home to a small contingent of support staff, a variety of birds, and an astonishing number of tiny arctic plants. 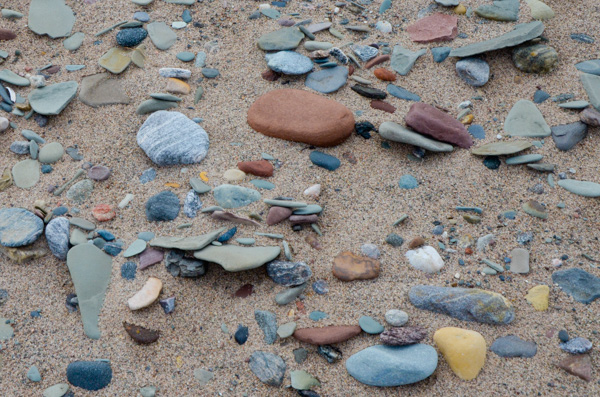 The first thing that struck my eye as we landed in our Zodiacs and began to walk around, however, was this kaleidoscope of colorful stones throughout the beach. All the colors of the rainbow are represented in some shade or another. 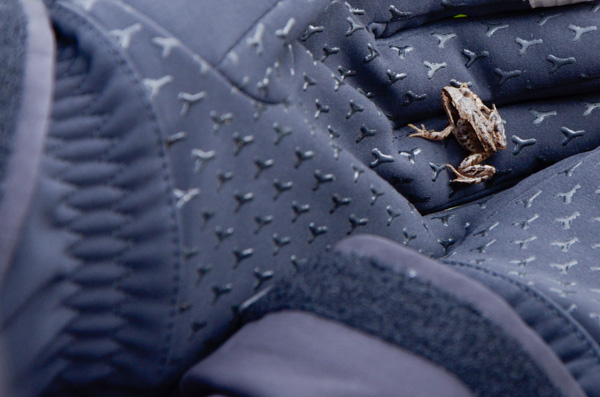 One of our sharp-eyed naturalists spied this tiny frog. Its size can be judged relative to the gloves. 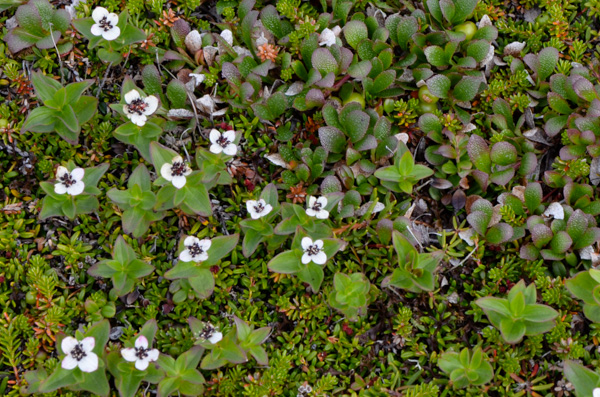 I believe that these are a form of bunchberry, in which case they are relatives of the dogwood. They are only a few inches high. 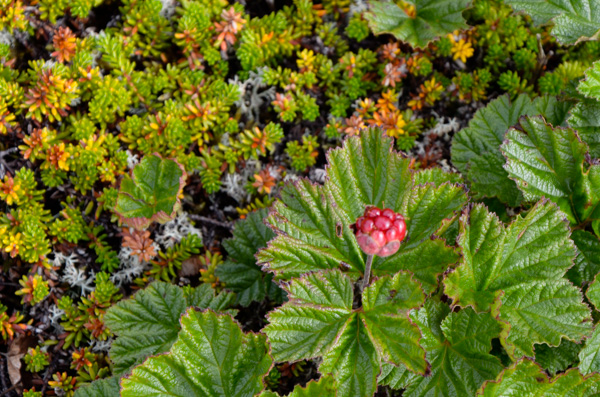 This is an unripe cloudberry. Had it been ripe (yellow), I'm sure someone would have gobbled it up before I got a picture. They are said to be a very great delicacy, but I never got to taste one. 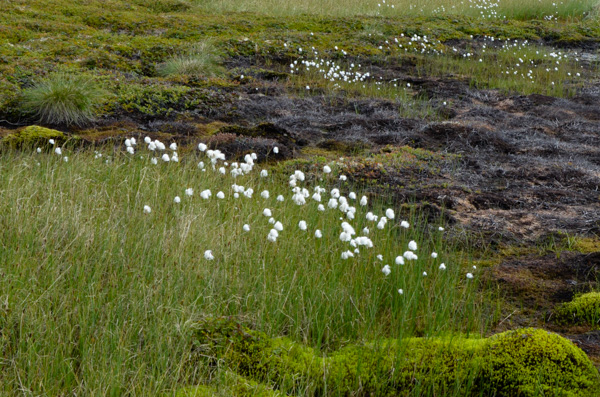 Cottongrass was common throughout our travels. 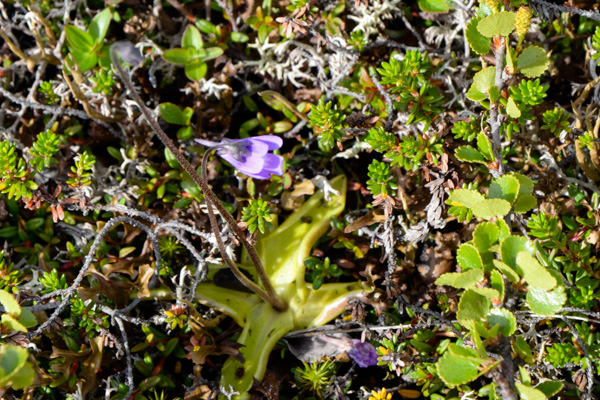 This is an insect-eating plant with the common name butterwort. Its prey is attracted to the leaves, which are sticky. The insect is trapped and then the leaf curls over it and digests the hapless critter. Several corpses can be seen on this plant's yellowish basal leaves.

I wasn't expecting to find an orchid in the arctic, but this is a spotted orchid, or Dactylorhiza maculata. I won't say they were common, but we saw them in several locations. 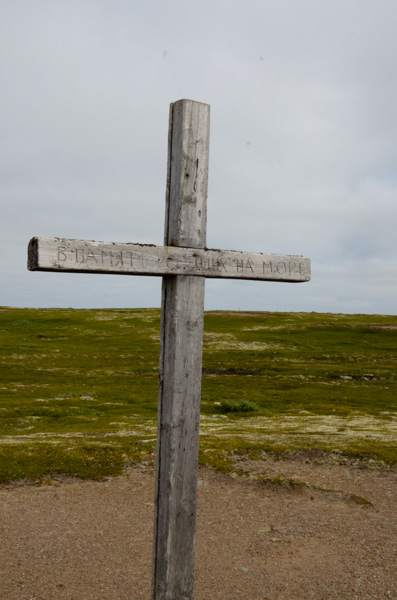 But there weren't just plants on the island.

This simple memorial cross contains an inscribed dedication "to those who died at sea." 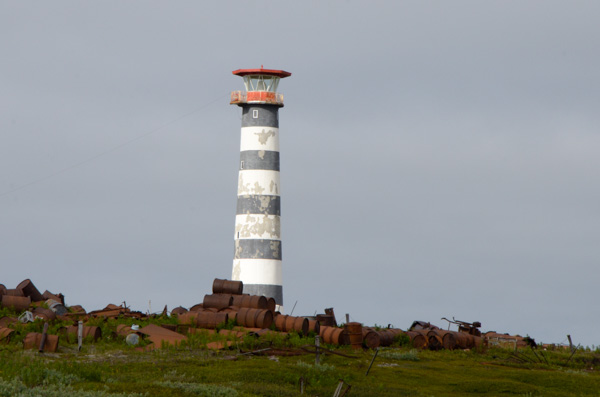 The current structure at this location was built in 1974, but there has been a lighthouse here since 1842.

The discarded drums and other detritus on the island were trashy looking, but it is expensive to keep a station here in the first place. Hauling away large pieces of junk would be cost-prohibitive.

The light only operates during the time of the year that it actually gets dark! 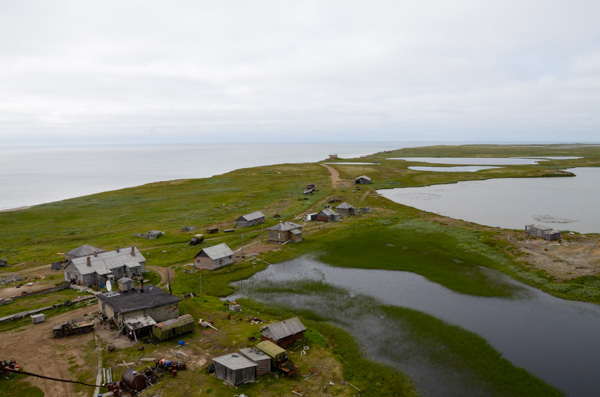 This is the view from the top of the lighthouse. The expedition staff were NOT encouraging folks to climb up and not many did. The stairs were made of rebar and although they were very sturdy, they were unnerving since you could see right through them to the base.

Only a few of these buildings were occupied. Many were workshops of some kind. Much of the island is bog. 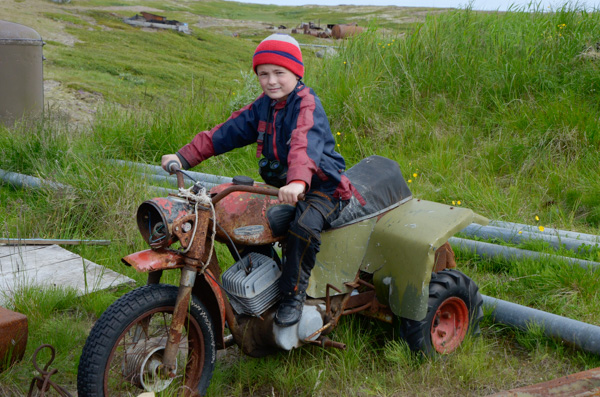 This youngster was spending the summer with his father, who is the 4th generation lighthouse keeper at this place. He lives in Arkhangelsk during the school year. His dad told us that although every summer he is asked if he wishes to do something else for his vacation, so far he has always wanted to come back here. Perhaps he will be the 5th generation keeper.

I don't know if this ATV is operational. The tires look new, so perhaps it works in spite of the rust. 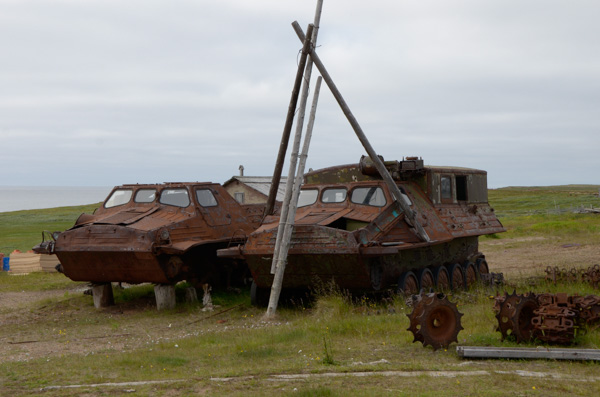 I can't imagine what these things are or how they were used.