Our stop the next morning was the village of Chapoma on the Kola Peninsula. Like Gridino, this once-viable fishing community is barely hanging on and populated largely by pensioners. There are only 30 permanent residents although others come for the summer. The village has no roads to nearby towns. There are no nearby towns. The only access is via sea (in the summer -- the White Sea freezes in the winter) or helicopter. Food for the single grocery is delivered monthly. The staff admonished us not to purchase anything at the store because anything that we bought, even candy, would be unavailable for the locals until the next supply run.

In the 1990s a Russian research expedition visited this and other White Sea villages and found that the inhabitants were satisfied with their situation. I doubt this is still the case. 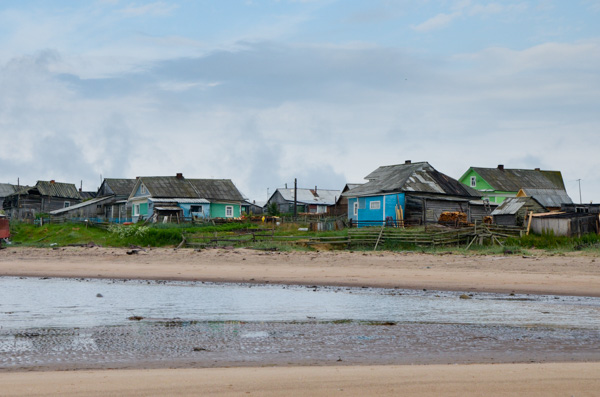 Our Zodiacs landed on the sandy beach where the Chapoma River meets the sea. There is at least one company that offers fishing tours on the river with accommodations in the village.

More homeowners in this village are trying to keep their houses painted and well-maintained. 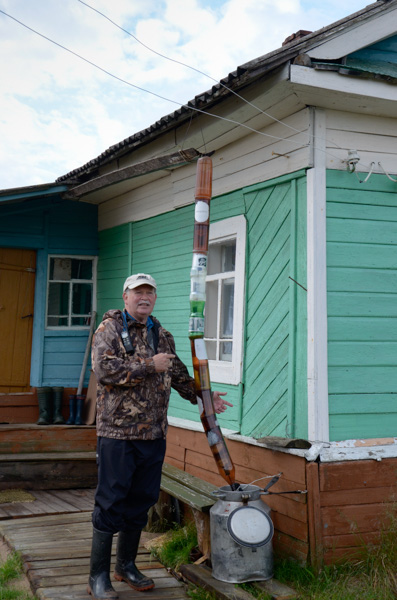 Tour staff member Ron Wixman is explaining the whimsical but effective "down spout" used by this homeowner to capture rainwater. During the explanation the owner came out to chat with us. She was very pleasant and seemed amused by a group of western tourists.

This was the main street of the village. There are clearly vehicles in town that use the road, but we didn't see any. The major users of the road were dairy cows, one of which can just be seen. 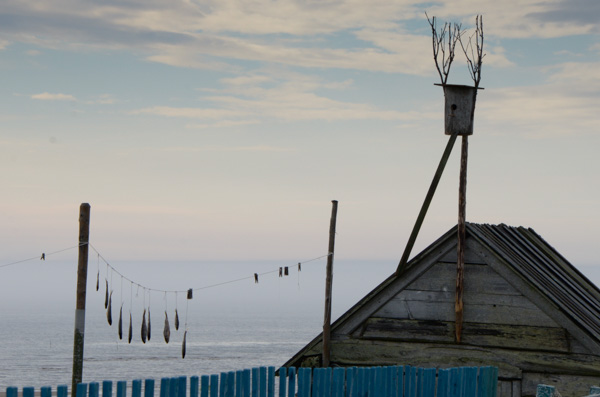 We speculated as to the reason behind the "antlers" on the birdhouse but didn't come to any conclusion.

The small fish hanging from the clothesline are a local specialty. They are dried and used for snacks like we might enjoy buffalo wings. We were told they are particularly good with vodka.

Some young heifers. It wasn't clear if the dog was herding them, guarding them, or just hanging out with them. They pretty much had the run of the place. 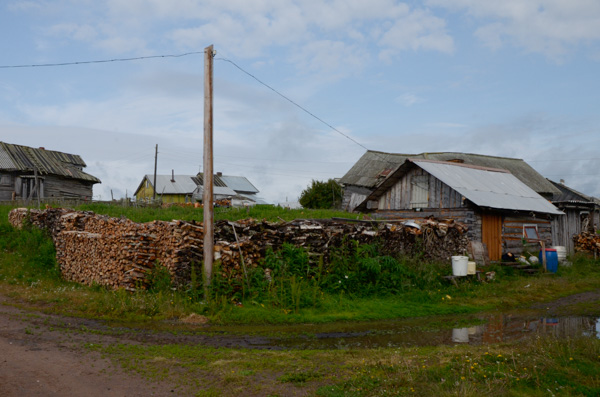 This property had quite a firewood stash! It may have been a sauna or perhaps the home of one of the year-round residents who was stocked up for winter. 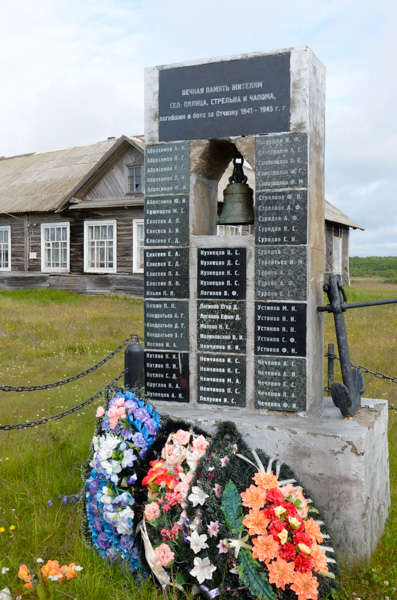 This simple war memorial lists, on both sides, the villagers of the Chapoma, Pyalitsa & Strelna areas killed in WWII. It must have been a significant percentage of the male population. I wonder to what extent it contributed to the decline of this village. There would be as many as 5 or 7 men with the same last name.

The building in the background is the former school, now closed. 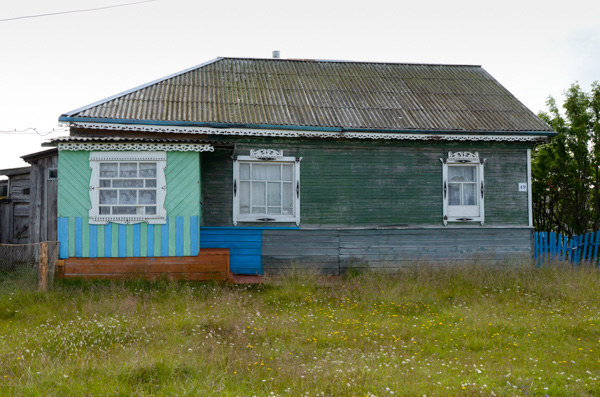 I was struck by the attention to detail on this residence. There are elaborate "gingerbread" bargeboards on the eaves and the windows are finely detailed. Lace curtains decorate the windows.

The guides said that if nothing else on a house is painted, the entrance vestibule or door would be. That is the case here. 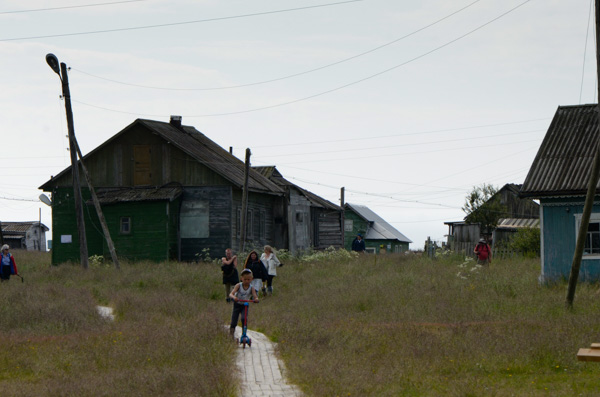 We saw several children at play. There was a deserted playground with an extensive jungle gym, but the kids preferred scooting around the plank sidewalks.

The former Chapoma fishing cooperative, the large building in the background, is located on the banks of the river. I have been unable to verify whether it is still operational. It was as recently as 2013.

At one time, due to the declining catch of fish, the Chapoma cooperative had begun to poach baby seals for their prized white coats. 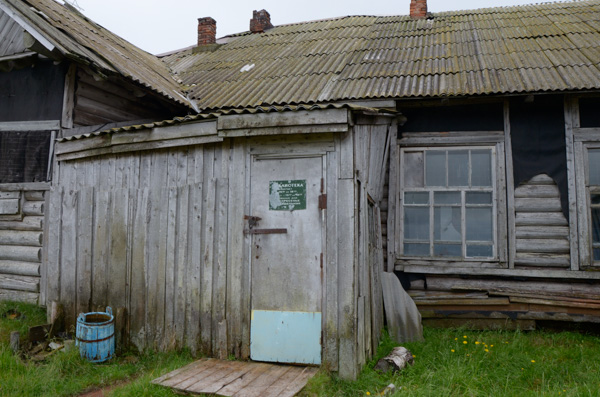 The library and community center are now defunct.

This homeowner had created a number of planting beds using recycled materials of various kinds. It was a cheerful sight. 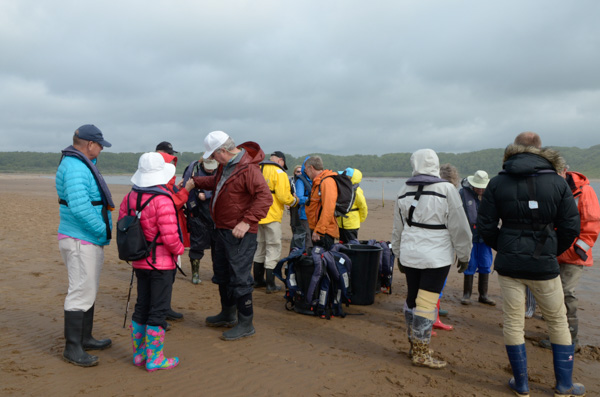 After our tour of the village we suited up for the Zodiacs. I included this picture to show how the lifejackets were stored in big tubs while we were ashore. You didn't root around for the specific vest that you had taken off -- they were all pretty much identical. Ship's staff kept watch over our belongings while we were ashore.

As we traveled farther north, we left the warm sunny weather behind. Although it was typical July weather for northern Russia, it was a tad nippy by Virginia standards!

That afternoon the ship visited another village named Pyalista. It was even smaller and more remote than Chapoma and we elected to remain on the ship.