The next morning our first "port of call" was Nikonov Island. It is a lesson to me to write these narratives closer to the event because four months later I can't remember why we didn't participate in the visit to this area. I'm sure it was a wonderful outing. I'm sure we had a good reason for not going, whatever it was.

We did land at Gridino Village that afternoon. This was a prosperous fishing village as few as 30 years ago. Today the population largely consists of pensioners. The school closed some years ago and the remaining children attend boarding school in the closest city, Kem. 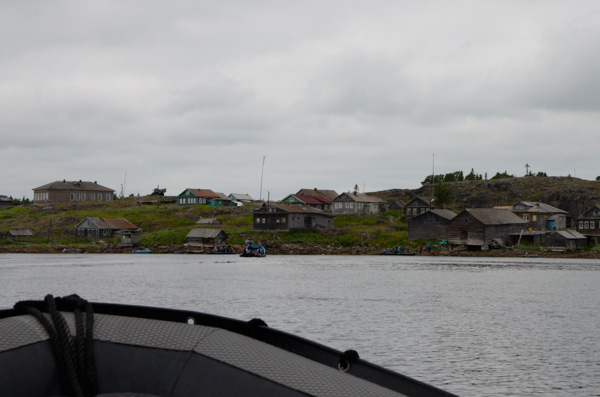 Our Zodiac is approaching the village. Many buildings line the shore, but few of them look any more thriving than these. We will spend our visit in the area shown here. 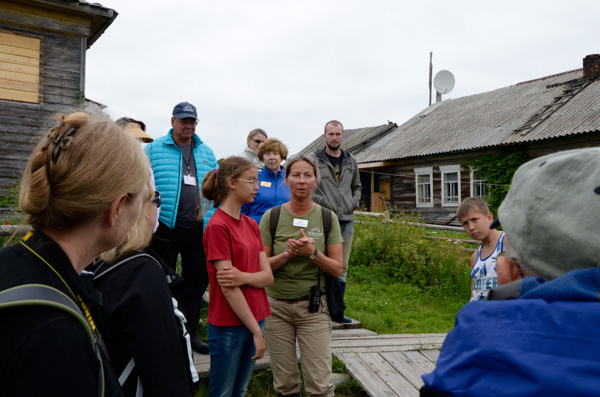 A pair of excited children met us at the landing: the young girl in the red shirt and a boy who is just visible on the right. They are visiting for the summer and volunteered to take us around the village. The woman in the center of the picture is Elena Myasoedova one of the expedition staff. She grew up in Russia, but now lives in the US. She agreed to translate for us.

None of the grown-ups came out to visit, but we saw residents peeking out their windows. Some had their cameras to take pictures of the tourists! 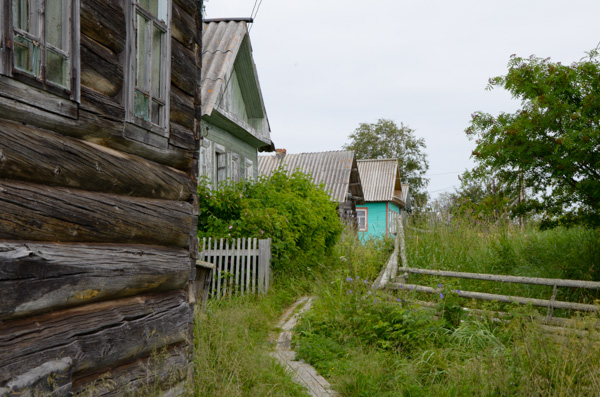 Sidewalks were often simple planks as shown here. It was a practical way through the stinging nettles that grew throughout the village. These were prevalent where I grew up and I retain a hearty respect for them. I was glad to be wearing long pants! 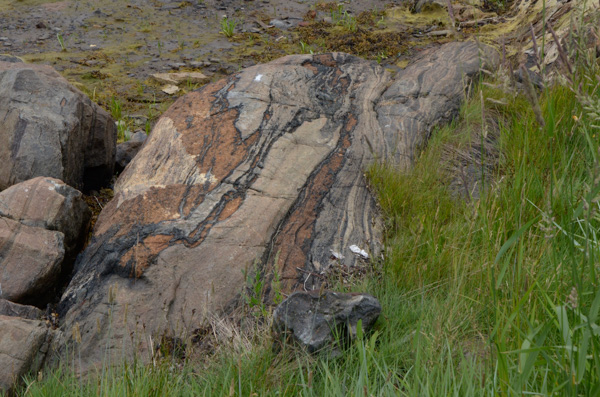 Rocks like these with many layers of inclusions made our geologist perk up. This is a type of metamorphic rock called gneiss. We saw a lot of it! 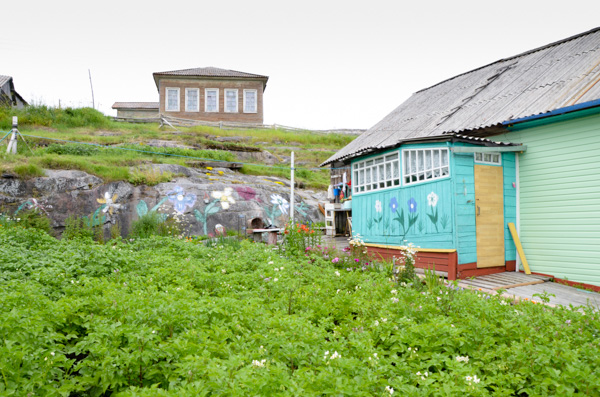 This householder has gone the extra mile to make his or her place look cheerful. The house itself is painted, which is unusual, and flowers are painted on the rocks and the shed attached to the house.

The actual plants are not intended to be decorative, however. They are very practical potato plants. Beets were another popular landscaping option.

The building on the hill is the former school, now closed. 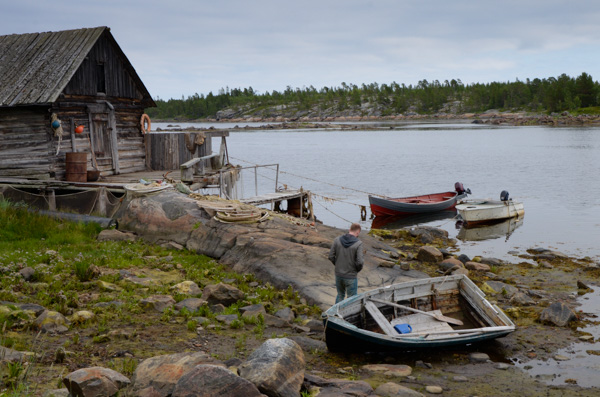 The village livelihood is based on fishing -- at least during the portion of year when the sea isn't frozen. 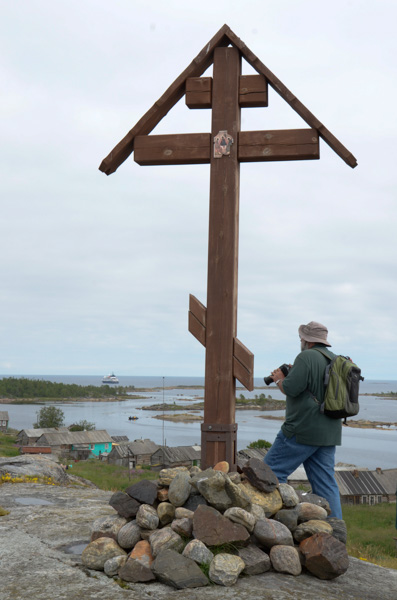 This Orthodox Cross was located at a high point. It serves as a navigational aid as well as a monument. Such crosses commonly had little "roofs," but I never found out if they had any purpose beyond protecting the structure.

The village church was much deteriorated. The doors and windows were closed and barred, but the entrance stairs were in good repair so perhaps it was still used. 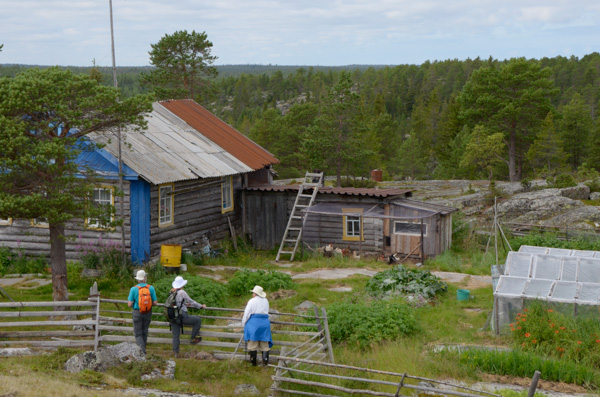 This was the most prosperous farmstead that we saw. In spite of its rugged appearance, everything seemed to be in good repair. There were greenhouses and poultry pens. I don't know why we didn't see more greenhouses, but we didn't. Perhaps the winter snows damage them too much.

When we asked why most houses were not painted, we were told that the harsh climate requires frequent repainting and many homeowners feel it is a waste of money and time. 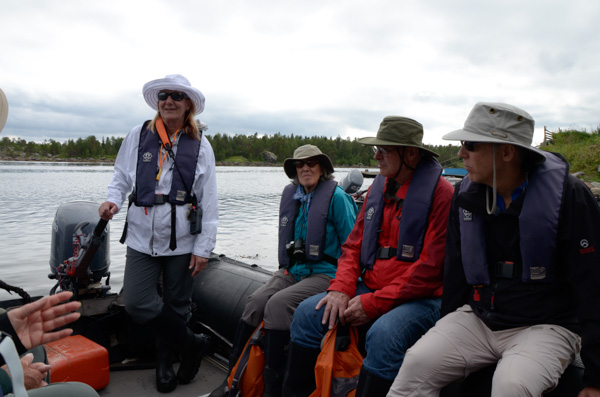 After touring the village on foot, we enjoyed a Zodiac cruise along the inlet by the village. The Zodiac driver pictured here is Shirley Metz, who was our leader for the Karelia portion of the tour. She was one of the founders of Zegrahm and has impressive expedition and leadership credentials. 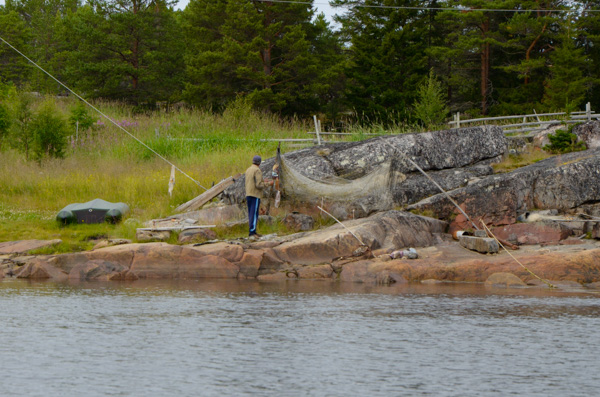 A local fisherman tending his nets. 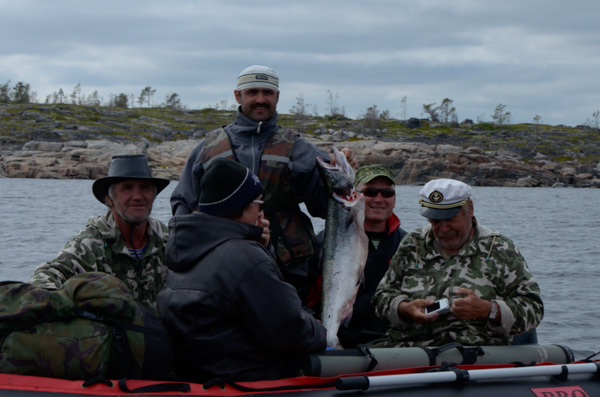 This group of fishermen were thrilled to see American tourists and were proud to show off their catch. I don't believe these were locals. We were told that city fishing clubs will "rent" fishing rights on remote rivers and I think these guys were businessmen on a rustic holiday. 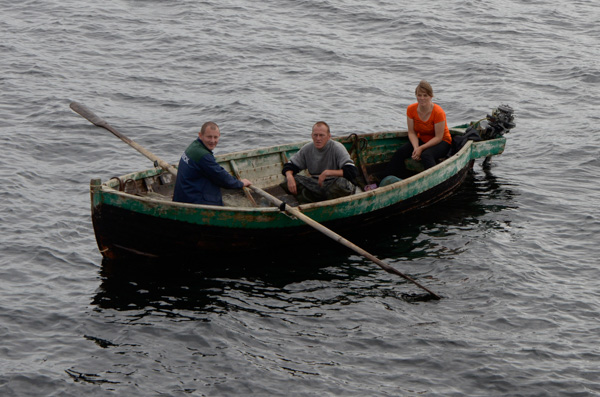 These folks, on the other hand, were definitely locals. They had come out to the ship in suspicion that we were scouting the area for foreign poachers who were planning to steal their fish. They were not happy. 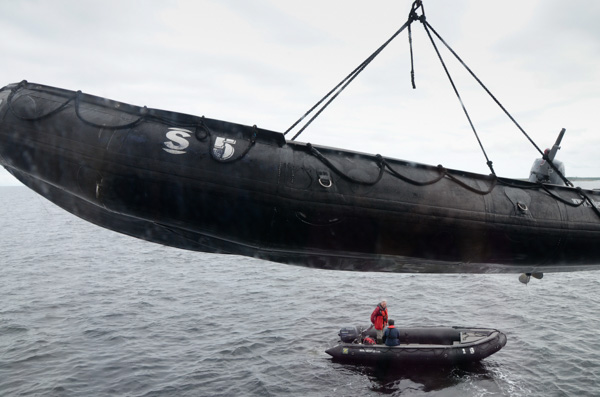 Our stateroom was right where the Zodiacs were raised and lowered. Usually they went up & down empty like this one. The first one down and the last one up, however, had the driver hooked to the free line seen dangling here.

We often looked out the window and waved, and we always got dressed before opening the curtains just in case....