That afternoon, Dr. Martynov led us on an exploration of nearby Anzersky Island. This is where our leaders first introduced the "long," "medium," and "leisurely" walking groups in addition to a "cruiser" group that cruised around the shore on Zodiacs. 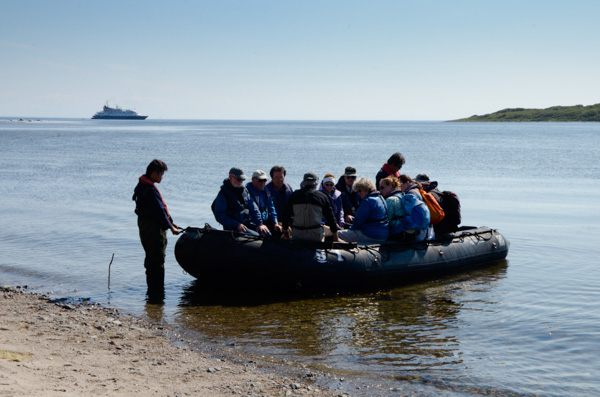 This was our first "wet" landing and our expedition leader Mike, sitting in the front of the Zodiac with his back to me, is instructing the occupants on how it should be done: scootch up to the front as far as you can, swing your legs toward the rear over the side, and slide out.

We all wore our waterproof boots for the wet landing. Most of us took them off and left them on the beach for the walk. 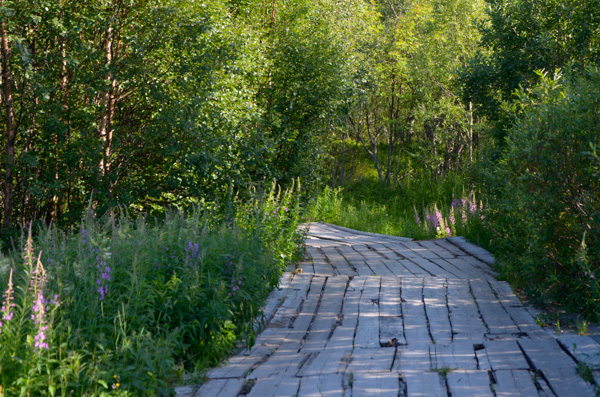 This boardwalk led away from the beach. Although much of the island was on high ground, there were swampy sections. On the far side of the island there were also wet spots, but not enough tourists go there to warrant building a boardwalk. At times I wished that I had brought my wading boots! 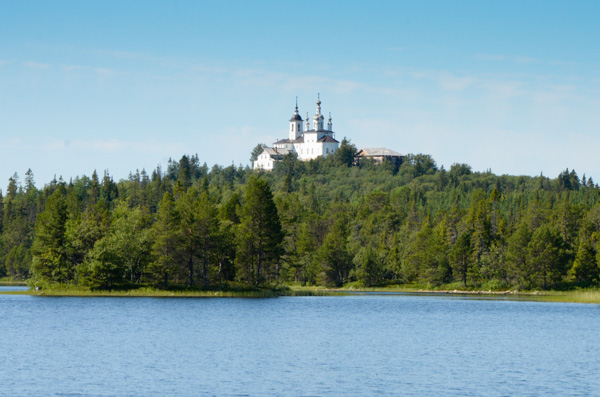 As mentioned above we subdivided into four groups: long walkers, medium walkers, leisurely walkers and cruisers. I usually signed up for the long walk, which at this location was approximately seven miles with some significant elevation gain.

The goal for the medium walkers, and the intermediate stop for the long walkers was the church of Cavalry Crucifixion, seen here.

At the place where I took the picture we had caught up with a large group of Russian visitors. 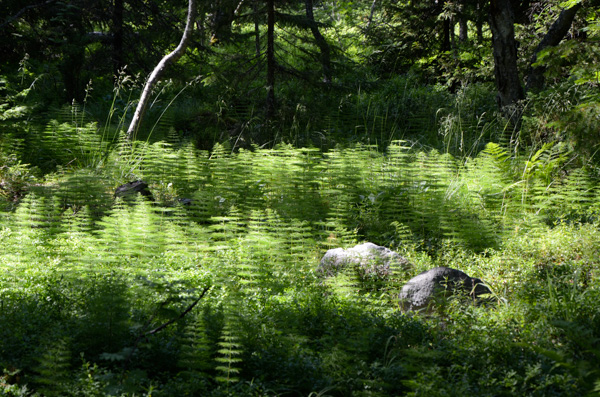 A distinctive feature of the undergrowth that I saw only here were these ferny plants that caught the sunlight and produced a horizontal shimmer. They look like they are constantly in motion! 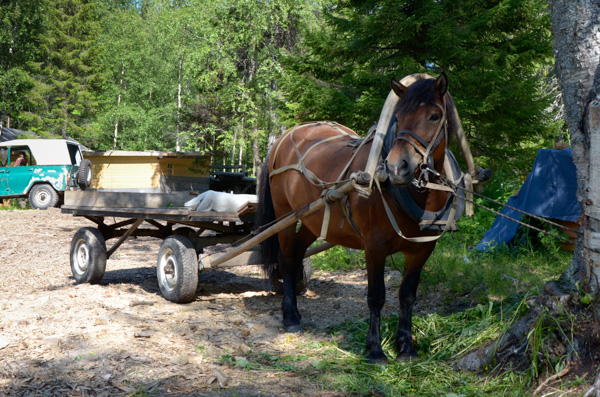 On the way we passed a small farmstead where this patient mare was tethered. I don't know what she was going to be hauling or where. Maybe tourists up the fairly steep climb. By the time we returned, she had been unharnessed and turned loose.

There was also a loose and very friendly horse who charmed several members of our group. I spend too much time with horses to be comfortable with an unfamiliar loose animal, so I didn't get too chummy.

This chapel was partway up the path to the main monastery building.

Both this chapel and the larger building would probably be considered sketes -- places where the monks could retreat for a season.

The chapel had a free-standing bell tower. Unlike bells in the US, which are swung to produce the ring, Russian bells are stationary and played by a ringer pulling the cords attached to the clappers.

Wikipedia has a discussion and video of bells such as these being played. 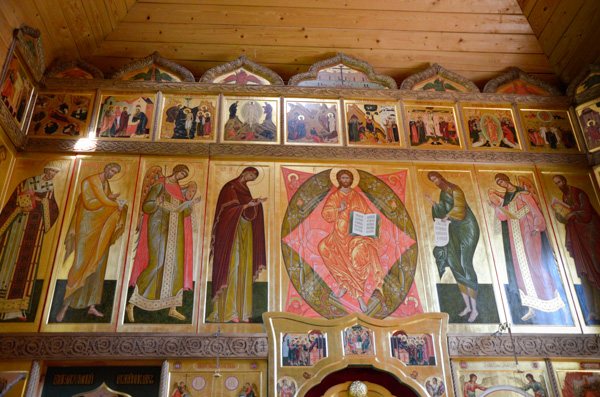 Even the simplest chapel has beautiful icon displays.

We've reached the monastery at the top! The hill is called Golgotha.

I'm told that it was lovely inside, but I was burned out on magnificence and elected to wait outside.

Our guides had much to tell us at each stop, but that also became information overload. I'm sorry to say that I don't remember much of what I heard -- but what I saw was wonderful!

Our intrepid band of long walkers came off the mountain onto the flat land on the other side. The path through the trees was lovely and the temperature was perfect.

We found that the woods were wet, however, and where there are swamps there are mosquitoes. For some reason I was the only one who had thought to bring repellent and my Deep Woods Off made the rounds. It's nice to be popular! 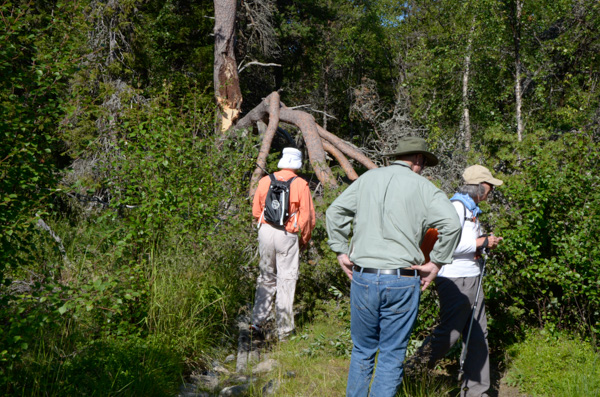 Clearly this way isn't much used. Although to be fair this damage appears to be pretty recent. We were able to bushwhack a way around it.

Eventually we came through the trees to the far side of the island. As we passed this cove on our hike back, I thought it would have been a wonderful place to bring Zodiacs to pick us up! 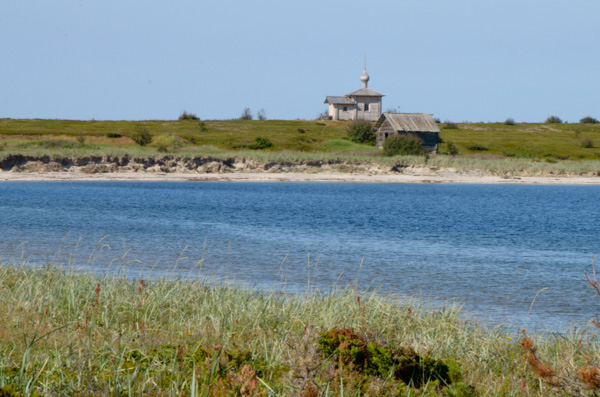 Across the cove was another little chapel. Our destination was on the far side of the chapel, so we had a ways to go yet. 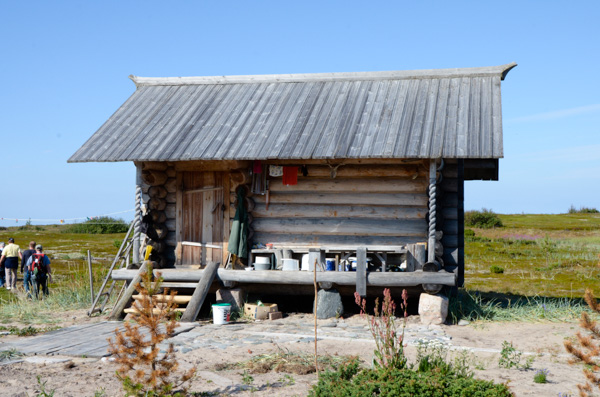 This little house near the chapel was occupied, but we didn't get to meet the occupant. I loved the spiral columns on the porch and the fine detail on the ridge pole.

The Russians who live in this area have developed "log cabins" to a high art. They are more elaborate and finished than similar buildings in the US -- even the modern ones. 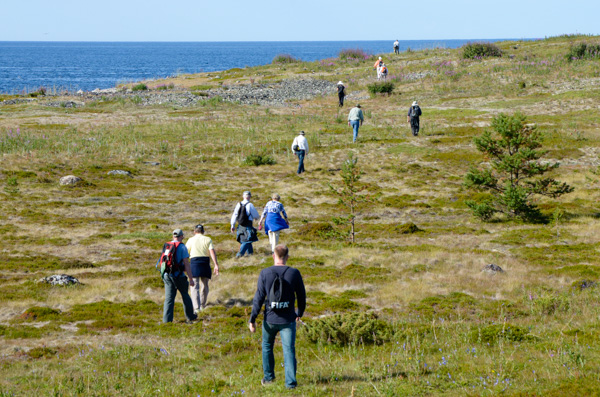 We were walkers on a mission: Dr. Martynov was taking us to visit the "world's smallest labyrinth," which he had discovered some time before. It had been years since he last visited, so he wasn't exactly sure where it was.

I wasn't in the vanguard on this expedition. 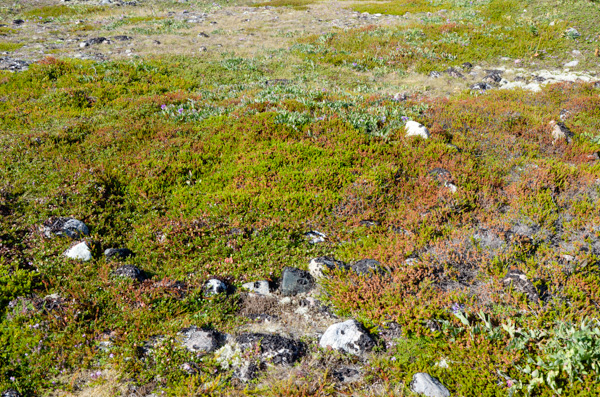 Here it is -- overgrown, but the paths are still visible.

I forget exactly how large it is, but I think it was on the order of six feet in diameter. 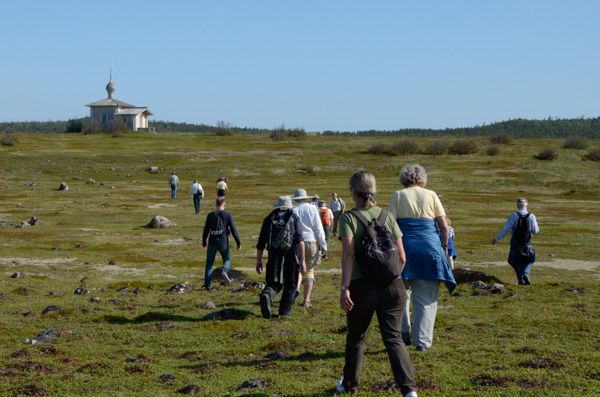 Having reached our goal and now having to shake a leg to get back to the ship on time, we started a forced march back to the landing.

On the way we passed the chapel, which had been recently built, but there was little time to explore.

It was brisk exercise, but a beautiful day for a hike. 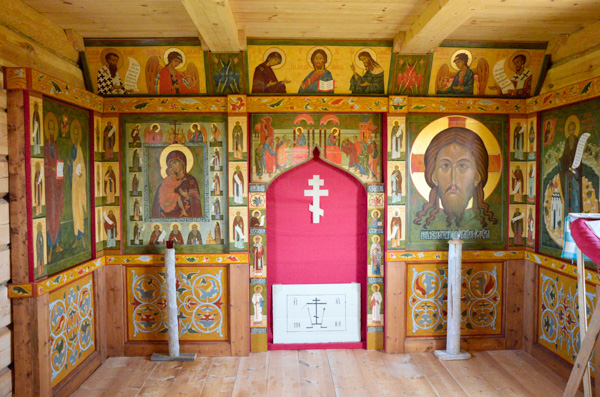 I did snatch this picture of the chapel interior.

I was more fascinated by the small chapels than the fine churches -- especially in such a remote location as this.