Mysteries of the Far North
Arkhangelsk

The next morning we were back on the buses. Our three buses  took different routes so that we wouldn't all pile into the same places at the same times.

One thing we didn't figure out until later is that many of the sights we visited were within walking distance of the ship! 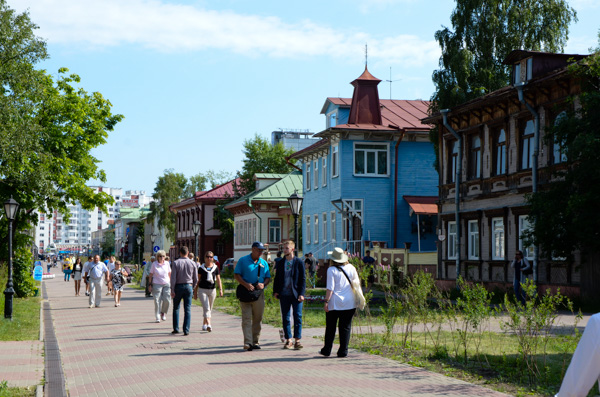 Pomorskaya Street is an open-air museum of old Arkhangelsk wooden houses. Many of the houses were moved here to preserve them. Some had been turned into restaurants and some were still used as residences.

A funny incident happened here. I ran out of dental floss. The ship had none. I asked Elena, our Russian-born guide, where I could buy some "on the economy." Not so fast! Dental floss can only be had upon applying to a pharmacist. Denture cream, on the other hand, is available just about anywhere. Hmm. Think about that for a minute.

Elena did help me get some floss near this museum street, but it took some doing! Ever since I've traveled with spare supplies.

The street has numerous sculptures including the ones below: 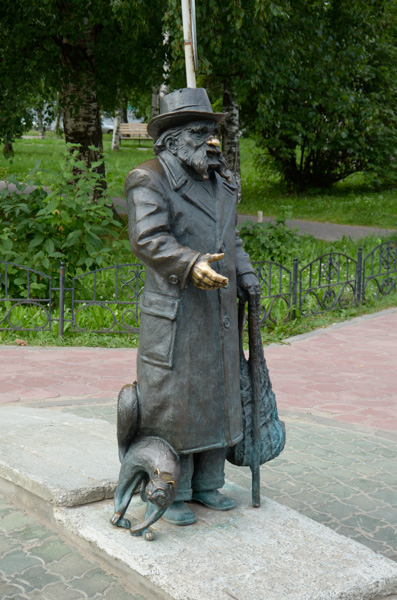 Stepan Pisakhov, with his drunken cat, was a local artist and story-teller. Our guide had read us one of his surreal stories on our first day's outing. It is considered good luck to shake his hand. And perhaps rub his nose as well? 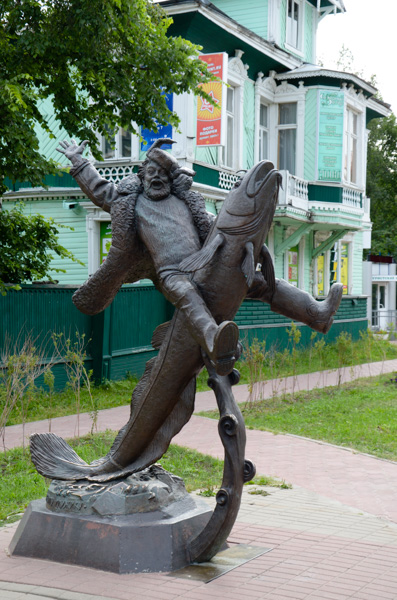 Our guide told us that, possibly due to the high northern location and long, dark, frozen winters, Arkhangelsk denizens have a piquant sense of humor and sense of the ridiculous.

Another stop on our tour was Gostiny Dvor, or merchants' court. It dates from the 17th century and is the oldest surviving building in Arkhangelsk. Shops were on the ground floor, residences and storehouses on the floor above. The building is now a museum. 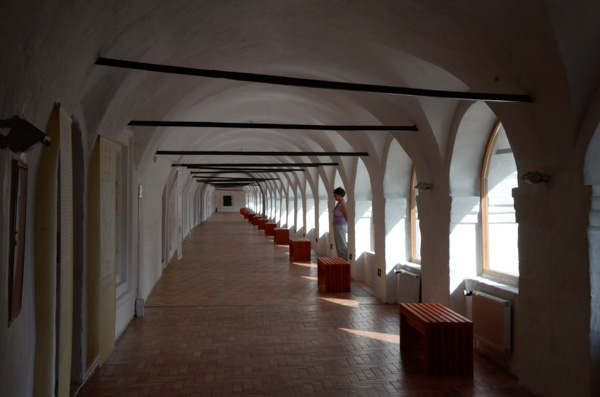 The residential apartments opened onto this gallery.  Solid steel doors and bars on many windows show that theft was a real fear. 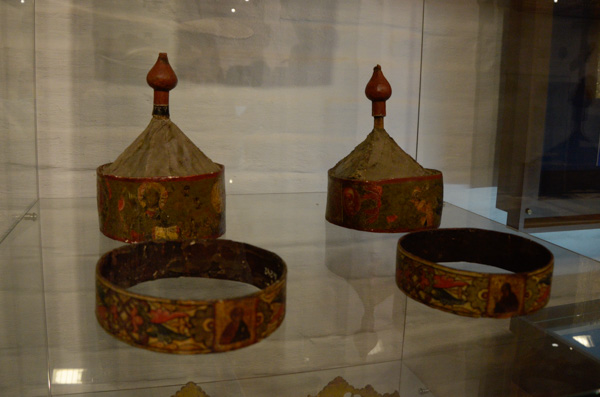 Given the number of weddings we had already seen (there would be more), I couldn't resist taking a picture of these traditional wedding crowns in the museum. The hats with the finials are for men, the "tiaras" were for women. According to one source: "Because a wedding is considered one of the seven sacraments for Russian Orthodox followers, there is more importance in placing crowns onto the heads of the couple than there is in exchanging wedding rings. The crowning is the second part of the traditional ceremony and is where the couple stand on a piece of rose-colored cloth and the priest places the crowns onto their heads. These can sometimes be held in place by relatives or friends. The couple shares a cup of wine and follow the priest three times around the lectern to symbolize their journey into married life. Traditionally, the crowns would be worn for eight days after the ceremony, but they are now taken off after the priest announces the union and says the benediction."

This museum was worth a longer visit -- as much for the building as for the exhibits. 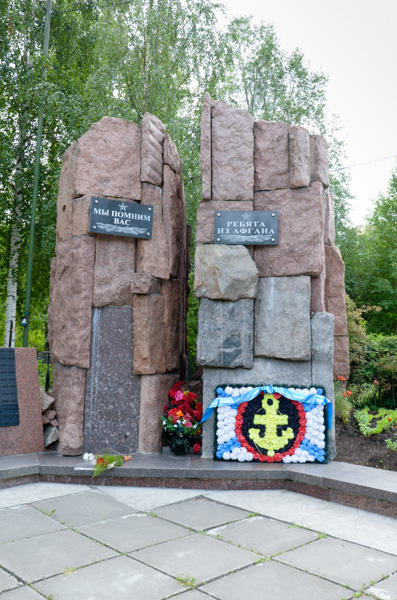 Our next stop was a cemetery dedicated to the British soldiers and sailors who came to Russia's aid in WWI. It was nice, but we drifted to this adjacent war memorial to those who perished in the Soviet invasion of Afghanistan. Their war lasted "only" nine years and was as inconclusive as the one we are still entangled by. Those who do not learn from history are doomed to repeat it.

We had not expected to see a number of places commemorating western forces who assisted the Far North of Russia in various conflicts.

Nearby was a local cemetery. See below for a couple of the burial plots. 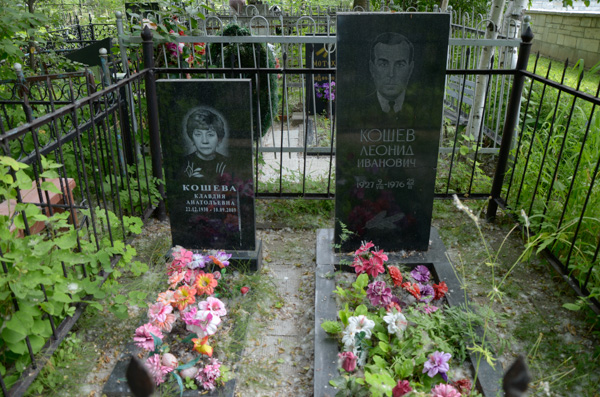 These graves were well-tended. The metal enclosures appeared to be universal. 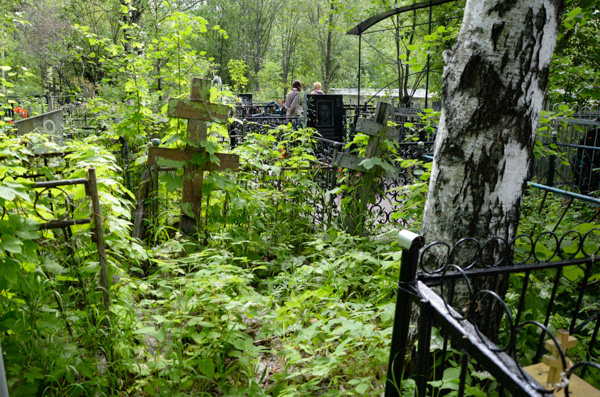 These graves have fallen into ruin. Either the family had moved away, died out, or just lost interest. There is no such thing as "perpetual care" in Russia.

The Church of St. Nicolas had stunning brickwork on the exterior. This is just a sample. The picture at the link shows more. 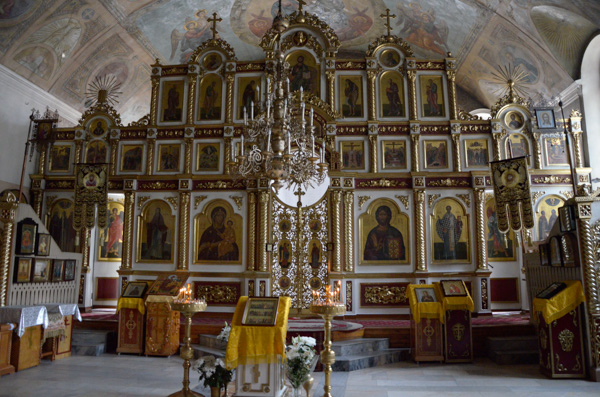 The interior of the church was beautiful. 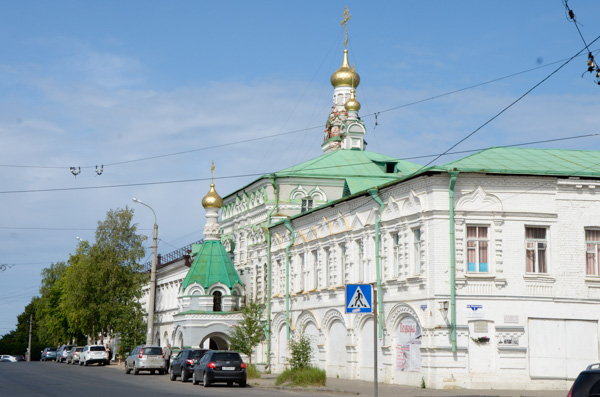 In its heyday the Solovetsky Monastery maintained a guest house in Arkhangelsk where pilgrims resided until they could catch a boat to the island monastery. It was only a couple of blocks from the St. Nicholas church. 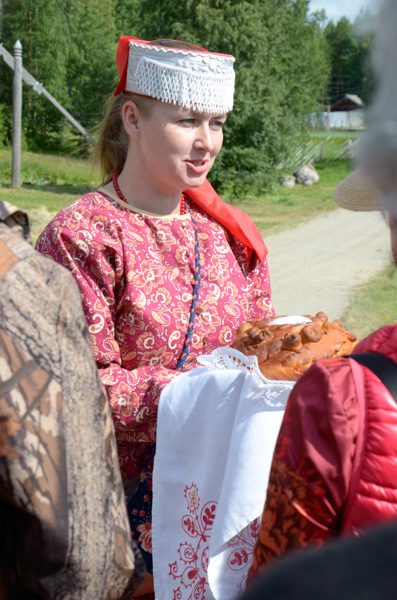 After lunch we visited the Malye Korely Open-Air Museum. As at Kizhi buildings were brought here from elsewhere and reassembled into theme areas. We only saw a small portion of it.

We were met at the entrance by lovely guides, each offering a loaf of delicious bread. 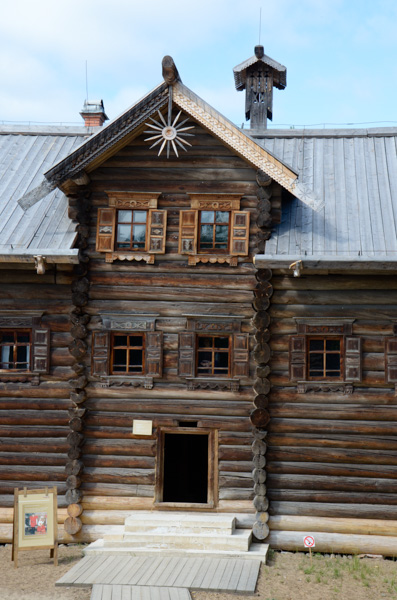 There was a lot to see at the museum, but I'll focus on this particular house. It was larger and more elaborate than most, and I particularly liked the details. It had been the home of a prosperous peasant or kulak and his family. The house dated from the early 20th century.

I should have made better notes at the time, but I believe several generations of the family lived in this house. We were told the significance of the "sunburst" hanging over the front door, but I no longer remember what it was.

After the revolution the rich peasants came in for special persecution. The result of suppressing the prime agricultural producers was (predictably) years of famine that killed many. Our lecturers told us that this devastation was not only expected but welcomed by the Soviet elite who felt that destabilization was key to establishing their new society. Lenin in fact recruited Stalin because of his ruthlessness. 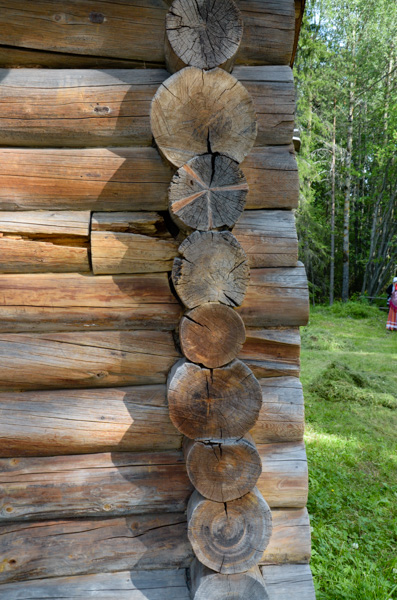 Logs were shaped to fit together as closely as possible. You wouldn't want a drafty house in this climate.

Joints were "caulked" with moss. 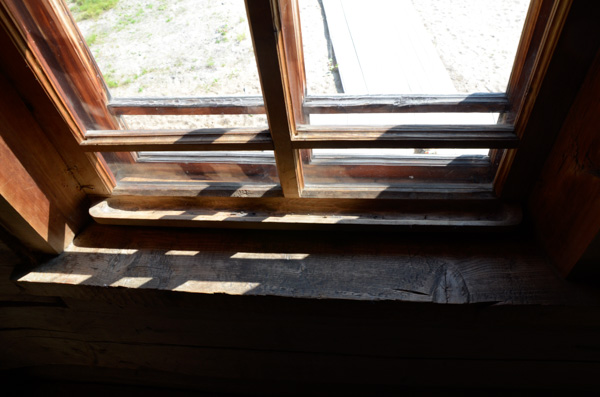 Windows were "double-paned." Even so, condensation built up on the inside of the window glass. A channel captured water so that it wouldn't run over the sills and down the walls causing rot. I didn't see any kind of drainage system, so I suspect the housewife would periodically mop up any captured condensate.

The gutter-hangers were carved in the shape of horses. All of the buildings had extensive stylized decoration. 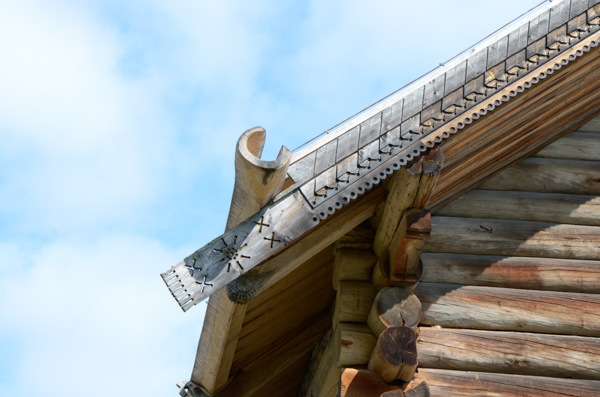 Another gutter with details showing the decorative "gingerbread" bargeboard and the distinctive shape of the gutters, which were crafted from a single log.

Where I grew up similar gutters would be made from rot-resistant cypress. I don't know what kind of wood was used here. 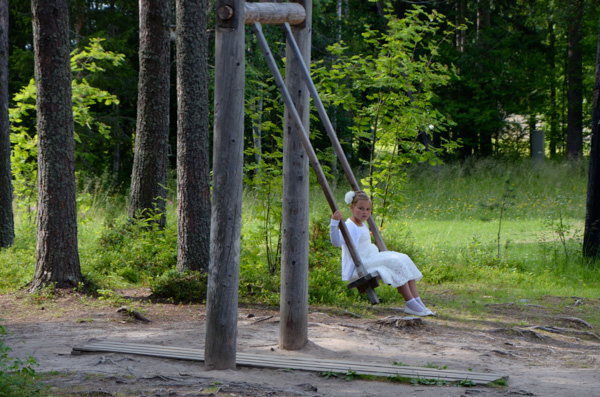 It wasn't all work-work-work in the Russian villages. This sturdy swing got lots of use. This youngster had escaped from a wedding party celebrating at the museum. Our museum guide told us that it is a very popular location for wedding festivities. 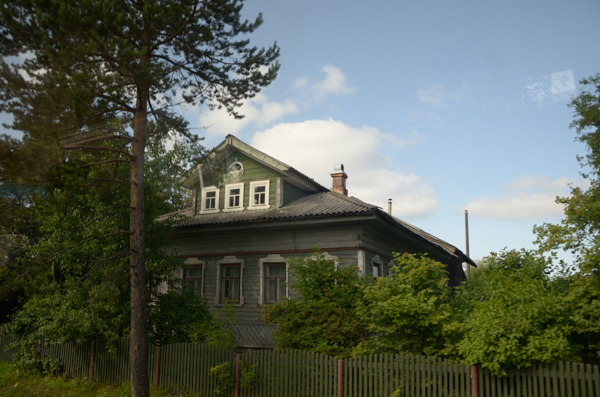 On our way back to the city, we passed numerous "dachas" or country homes. Our guide Elena, who grew up not far from St. Petersburg, said that many families had such country homes -- not just the party elite. The families used the land to grow vegetables to supplement their meager diets. They also hunted for mushrooms and other wild foods in the forests.

She said that in those days all the houses were pretty much like this one. Nowadays richer city dwellers are building larger and fancier vacation homes.

After our village tour we returned to the ship, which shortly thereafter embarked on its way to Solovetski.

We sailed down the Northern Dvina River past this church under construction. It is dedicated to the Archangel Michael, the patron of Arkhangelsk.

We were accompanied part of the way by this "kitesurfer" who swooped around our ship. I worried that he would fall in front of it and we wouldn't be able to turn or stop in time, but there were no mishaps. 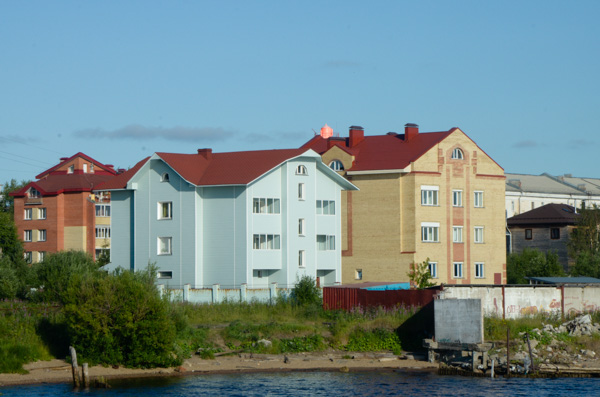 In addition to a lot of industrial spaces, we passed this new development. Homeownership in Russia is very high with the vast majority of families owning apartments (>80%). These are the nicest we saw on the entire trip.

Many of the Arkhangelsk dwellings were more like the smaller grey wooden building to the right -- only more decrepit. Our guide said that they were being redeveloped as time and money allow, but the owners of the individual units had to be compensated or resettled. When I asked about the status of private property in Russia, the only answer I got was "it's complicated." I'll bet it is.