Mysteries of the Far North
Karelia

Before we saw the flyer for this trip, neither of us had ever heard of Karelia. At present it is an autonomous republic within the Russian Federation, but it has a long history. Mostly it has been part of Russia (beginning in the 9th century and later) but has also been ruled at various times by the Novgorod Republic (12-15th centuries), Sweden (17th century), and Finland (early 20th century).

It is ethnically complex with Russian, Finnish and Saami peoples represented, among others.

While visiting Karelia we stayed in its capital, Petrozavodsk. It is located on the shores of Lake Onega, the 2nd largest lake in Europe. 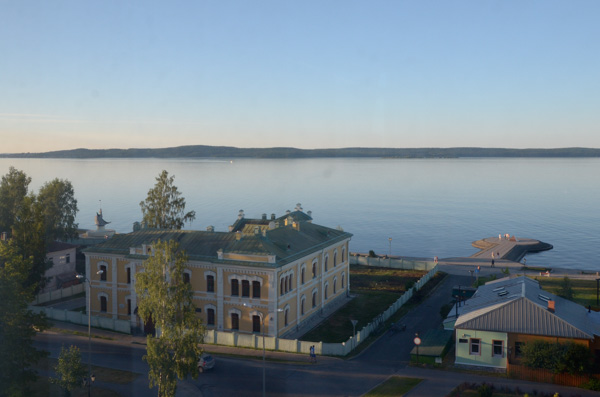 Even though we arrived at the hotel in Petrozavodsk very late, we are close enough to midsummer that it is light almost 24 hours. This is the view from our hotel room over the lakeshore.

We were surprised at how tired we became of the persistent daylight. It was quite a relief to return home to dark nights! 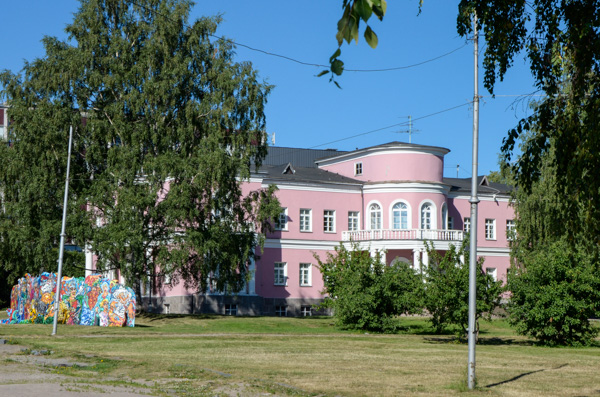 The next morning we walked along the lakeshore promenade to the harbor where we would embark for Kizhi. One of the sights along our way was a "wedding palace." If couples desire, there are also facilities for a reception or they can go to some other location after the nuptuals. Some also choose a religious ceremony, but it is separate from and in addition to the "official" one. 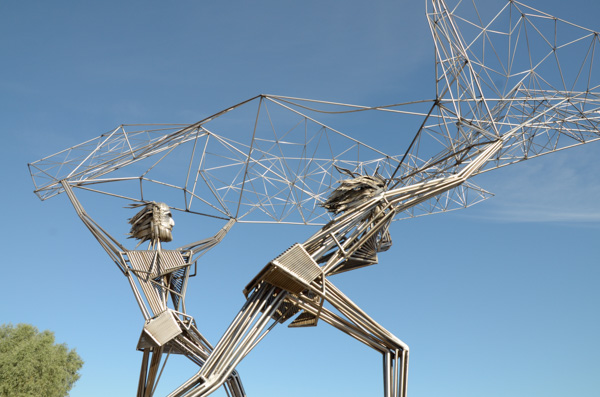 Another sight along the promenade was this sculpture, "The Fishermen," by Rafael Consuegua. It was a gift of Petrozavodsk's sister city: Duluth, Minnesota.

There were many other sculptures along the shore. This was my favorite. 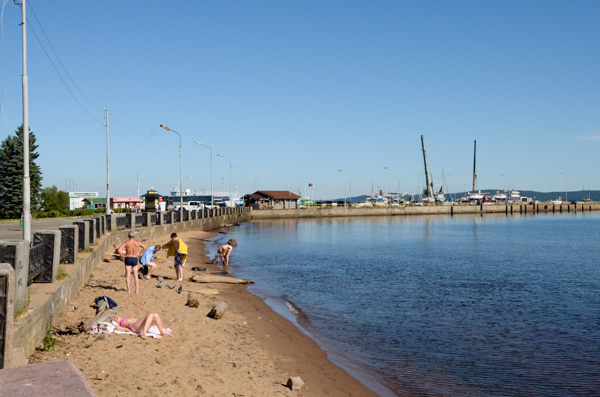 When we arrived at the harbor, which is in the background, we had some time to kill before our scheduled departure. Jim & I walked a bit farther and found the Petrozavodsk "beach." The unseasonably warm and sunny weather had brought out the sunbathers! 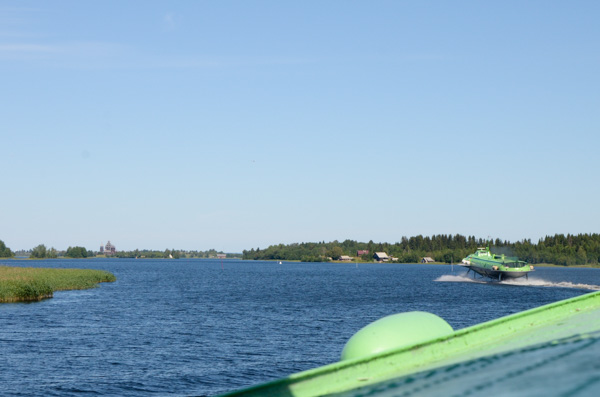 Finally we loaded into our hydrofoil for the trip to Kizhi, an island museum of traditional Karelian architecture and a UNESCO World Heritage Site. We are following another hydrofoil toward the dock. The central site, or pogost, is just visible on the shore to the left.

In spite of their efficiency and speed, hydrofoils are not much used anymore -- largely because of construction and maintenance expense. They are also not suited to water that is subject to significant waves. 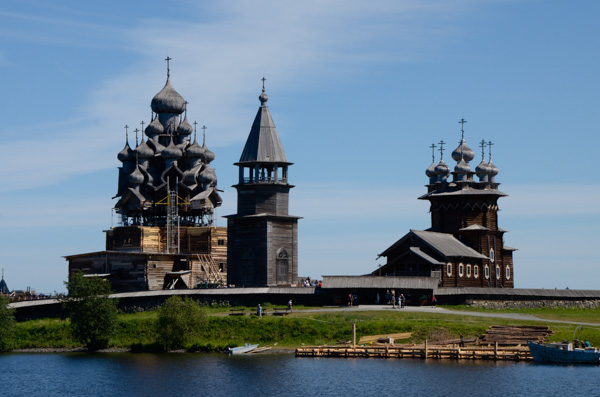 The left-most structure is the 18th century Church of the Transfiguration of our Savior. At the time of our visit it was being restored and not open to the public. (Internal metal scaffolding is supporting the dome making it look like it's floating.)

To its right is the 19th century bell tower.

The smaller church is the 18th century Church of the Intercession. When we first visited it, there was a baptism in progress!

The number of cupolas (22 & 9) has some kind of theological significance, but I forget what it is. 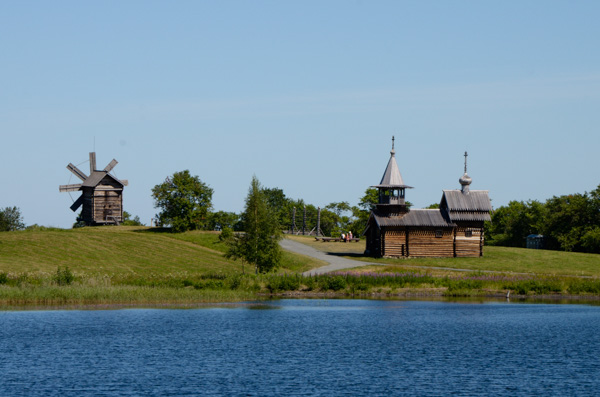 The windmill is an early 20th century construction. It can be rotated to catch the wind.

The chapel is from the early 18th century: The Chapel of the Archangel Michael. Every so often a "concert" would be played on the bells. It was astonishing what one ringer could do with a set of eight or so bells! It was something like this YouTube performance from California.

Most of the buildings at Kizhi have been salvaged and relocated from other villages in the area. 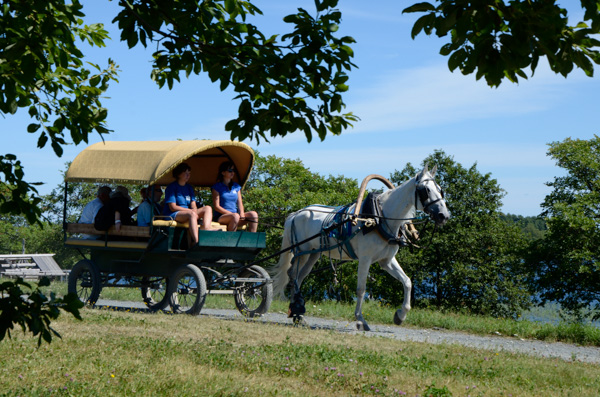 Some of our participants were not up to the long walk to the various locations at Kizhi. There was a horse-drawn "taxi" and separate guide available for them.

We had good timing to visit the island when there were no other cruise ships there. On occasion three to five ships are there at once and it gets crowded with hundreds of visitors. We passed one 4-decker as it was leaving! 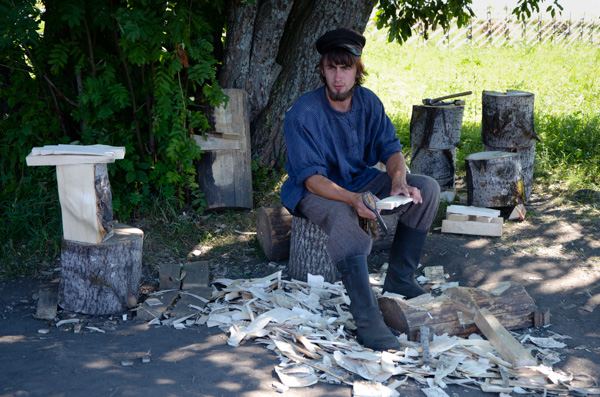 Artisans demonstrated traditional crafts. This young woodworker shaped shingles to be used on the church cupolas. A scale model nearby showed how they were used.

The favorite wood for such work is aspen. It is easy to work with traditional tools and expands when wet to make a water-tight roof. The Eurasian aspen is closely related to the North American "quaking" aspen. 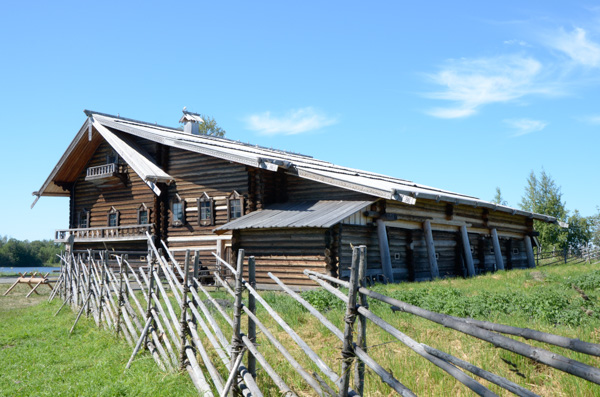 This is the Elizarov family homestead. The multi-story section where the roof is highest is the "living room." Animals lived in the ground story. The shed area at the back was used for storage.

The "chimney" on the roof is a simple smokestack. The traditional Russian stove used to heat the house and cook the food did not have a chimney. Smoke was released high into the living quarters to vent through the smokestack. This may have been sootier, but it was also warmer and that was a major consideration in this climate! 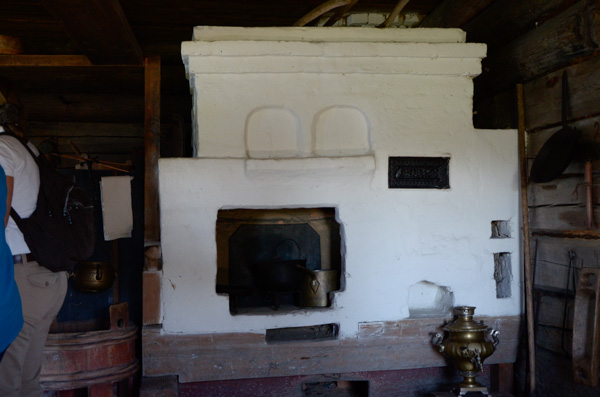 One stove heats the entire house. It penetrates through the wall on the right into the family bedroom. Privileged family members, the very old or the very young, had beds on the stove itself, which would be very warm.

A shelf runs around the room a foot or so from the ceiling and funnels much of the smoke and soot into the smoke stack and out of the living area. 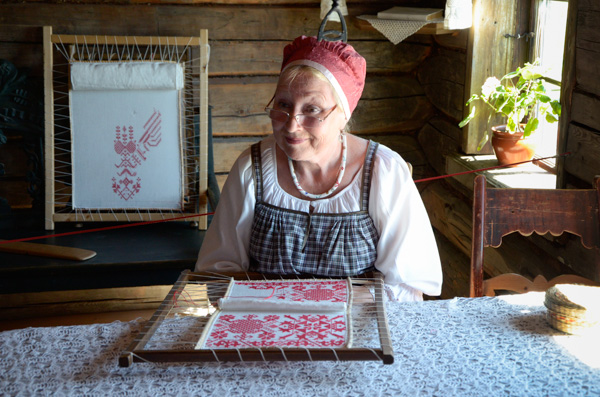 This lady demonstrated traditional cross-stitch embroidery. The technique ensures that both sides of the cloth are the "right" side. I do cross-stitch myself and I can't imagine how that works. It would be extremely painstaking.

In Russian tradition, red is the color of happiness. "Red Square" was so named well before the Revolution. The Communists co-opted this tradition. 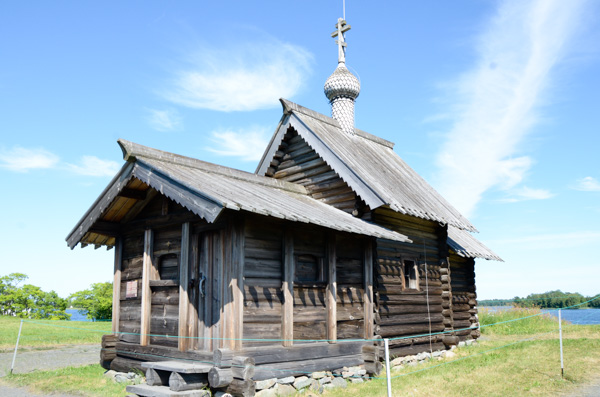 The Church of the Resurrection of Lazarus is believed to be the oldest wooden church remaining in Russia. It has, of course, been restored. It is not open for visitors.

The plan is typical Russian Orthodox with an entry or narthex, the central nave section where worshippers stand during the service, and a small altar section screened by an iconostasis. 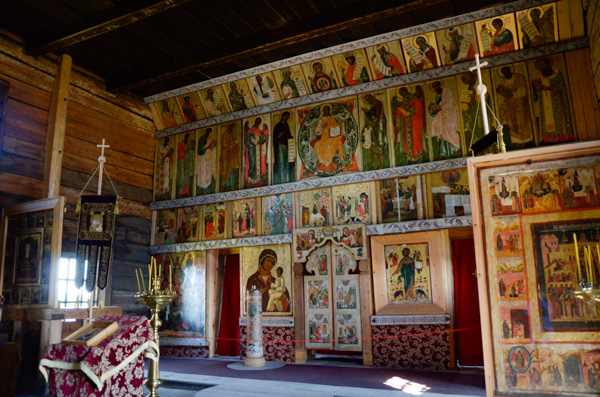 When we first visited the Church of the Intercession there was a baptismal service in process so we couldn't take pictures. Later we returned. The configuration of the church interior was standard for the churches we visited, but this is more elaborate. 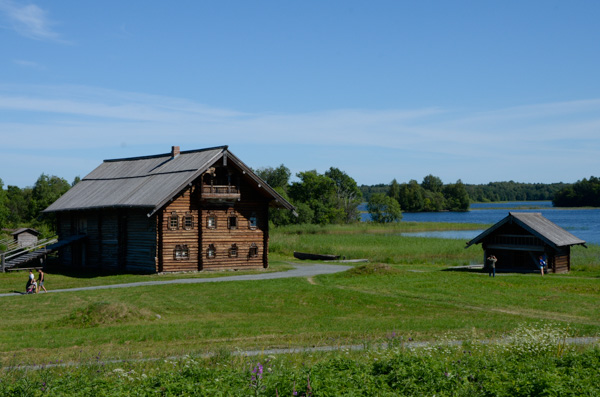 We had free time before our scheduled return so I walked around the island a bit. I was drawn to this farmhouse by the sound of singing.

Here's a good spot to talk about winter on the island. The lake freezes solid. In the old days the men left before winter to seek work in town while the women remained to tend the house and animals. Livestock were brought inside for their own protection and to increase the warmth inside the houses. 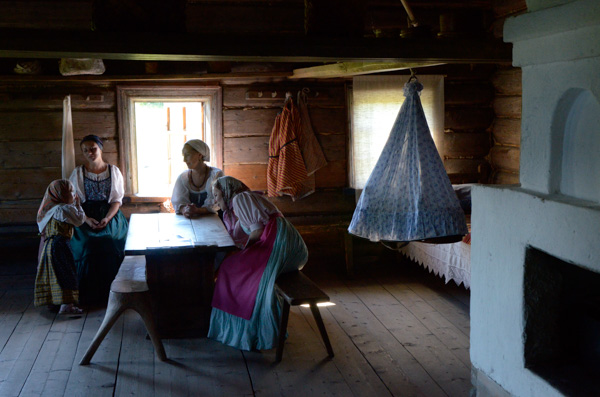 This group of women were entertaining themselves by singing what I expect were traditional songs.

The "tent" to the right is a traditional cradle hanging from the ceiling. The tent is made from an old skirt worn by the mother. Its familiar smell is felt to soothe the baby while mom works nearby.

There was much more to see, but I had a boat to catch. 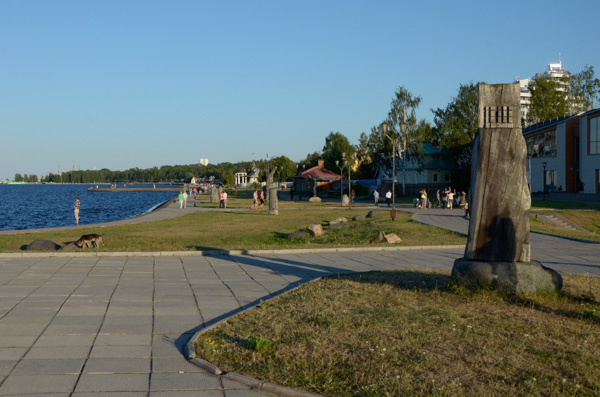 That evening, Jim and I explored the lakeshore in the opposite direction from the harbor.

Our hotel is the large white building behind the trees. The promenade ran from here to the harbor located beyond the point in the distance. It was decorated with a variety of sculptures.