The next morning we visited the Hermitage art museum and then headed north to our next stop in Petrozavodsk. 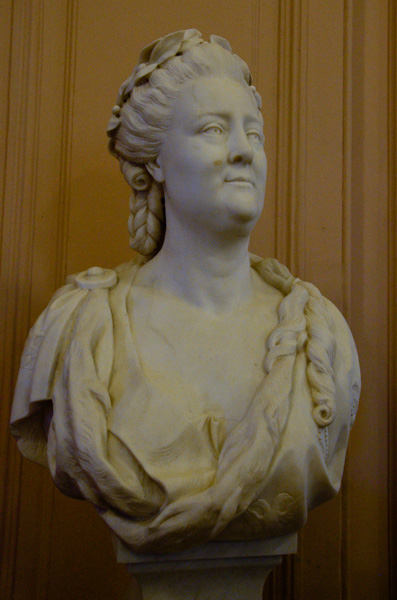 Catherine the Great was a German princess who deposed her husband, Peter III, the legitimate, but unqualified and unpopular, heir to the Russian throne, with the help of the Russian army. She even dressed as a Russian officer during the coup.

She weathered major personal scandals but was, by Russian standards, an enlightened ruler who instituted many governmental reforms.

After her death (of nothing more exotic than a stroke), her estranged son Paul I became Tsar. He reigned only briefly before being assassinated, but in that time he changed the law so that no woman might again become Empress!

Catherine was the creator of the Hermitage museum. 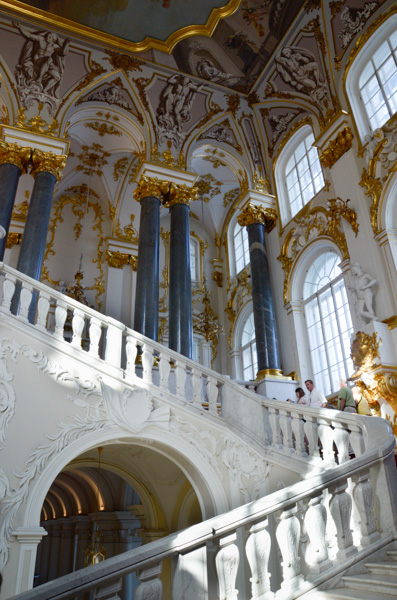 No visit to St. Petersburg would be complete without visiting the Winter Palace, the home of the Hermitage Museum.

Peter himself had built a much smaller and more modest building to use as his own town residence. It has been incorporated into the new palace but was not open during our visit.

This enormous complex was constructed by his successors, the Empresses Anna & Elizabeth, and enlarged by Catherine II.

The columns are constructed of lapis lazuli. It is sobering to ponder the expense of such elaborate buildings when so much of the Russian population through the ages has suffered, and continues to suffer, great poverty and repression. At least this building, and others we visited, are now open to the public. At the time they were built, they were enjoyed by very few. 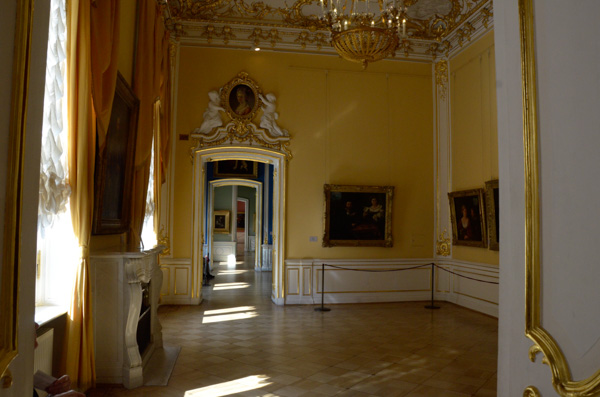 The Hermitage art collections are famed around the world. I was, however, almost more impressed by the building itself even though this ornate style is not my favorite.

Unlike most US museums, photography (no flash) is allowed almost everywhere. 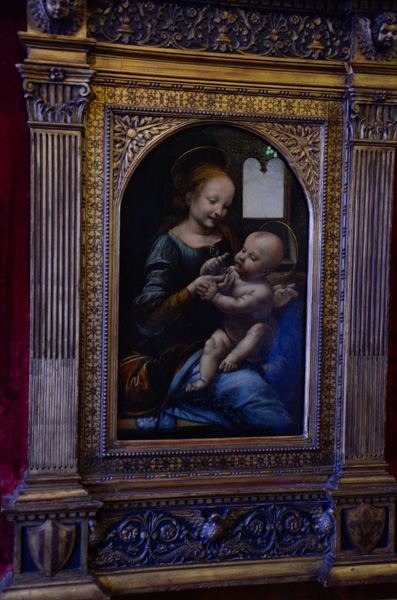 Of all the many wonderful works of art, my favorite was the charming Madonna and child by Leonardo da Vinci. Unlike most "religious" depictions, this one shows the warmth of a very young mother romping with her baby. 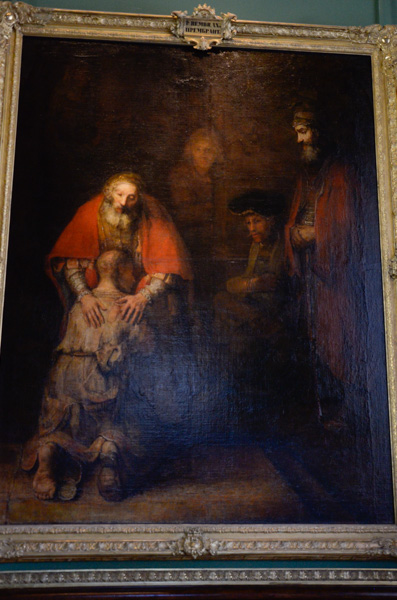 Rembrandt's enigmatic "Return of the Prodigal" is another of the famous artworks in the collection. The reflections from a nearby window made it impossible to get a good picture of it. 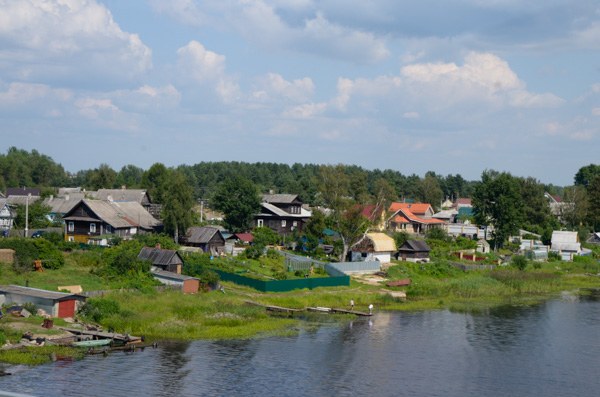 After our time in St. Petersburg, we boarded a bus for a looooong drive to Petrozavodsk, the capital of the Karelian Autonomous Region. It is far to the NE of St. Petersburg through mostly forested country.

We passed the occasional town, typically located like this one alongside a river. 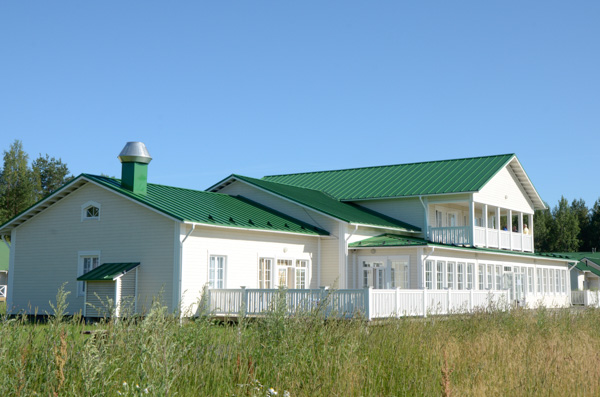 Partway we stopped in Staraya Sloboda for refreshments at this modern hotel/restaurant. There was a wedding reception in the restaurant downstairs. We met upstairs in a large room with the balcony shown here. The piroshki and beer hit the spot and it was a blessing to get off the bus for a while. 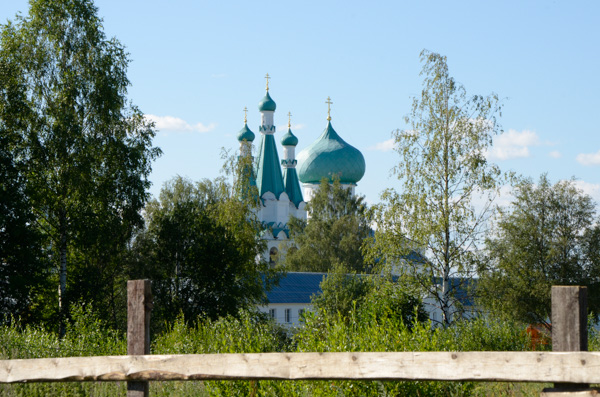 The major attraction of the area was the Alexander-Svirsky Monastery, down the road from the restaurant. It was founded in the 15th century by a monk from Valaam, which we would visit later. 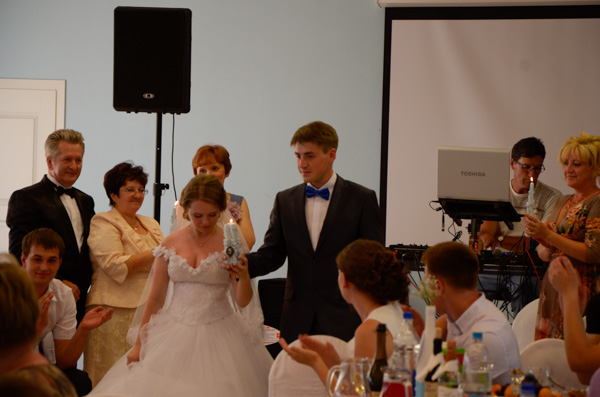 We were fascinated by some of the ceremonies associated with the wedding reception downstairs. There was an Emcee who organized the event. The candle held by the bride was lit from the candles held by the two mothers. There was much laughter and occasional chants of "vodka, vodka."

After our break, we piled back onto the bus to continue our interminable drive north. The total trip was about eight hours! It seemed longer. Much longer.