We left the commotion in Anchorage behind for a while to learn more about the original Alaskans and their way of life. We only had a short time to spend at the center, unfortunately, because there was a lot to see and to learn. Follow the link for details on the resources and programs.

The guide who took our group around was very entertaining and informative plus he got us back to the bus on time! 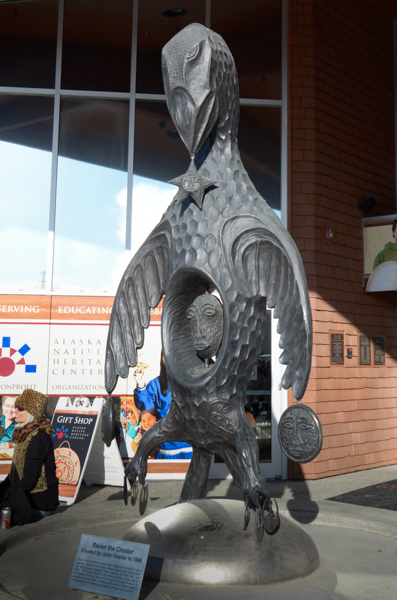 Raven is the creator spirit in many of the Alaskan myths. This sculpture at the entrance to the center is a modern interpretation of ancient symbols. 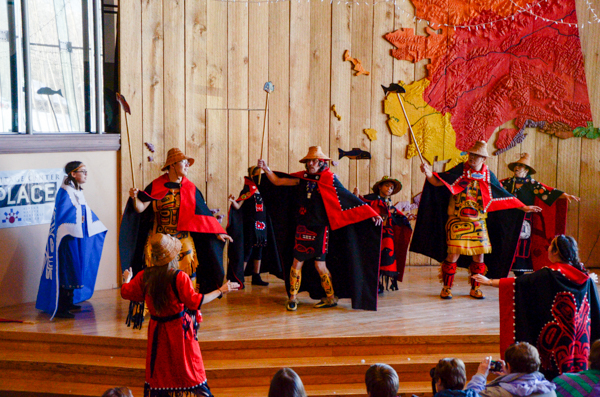 There were several traditional Native dance and music performances ongoing through the time of our visit. There were various groups presenting dances of many different traditions. I have a program, but can't definitely match up performers with the pictures.

These dancers are holding objects representing fish. The clothing is similar to Tsimshian pictures on the WWW. 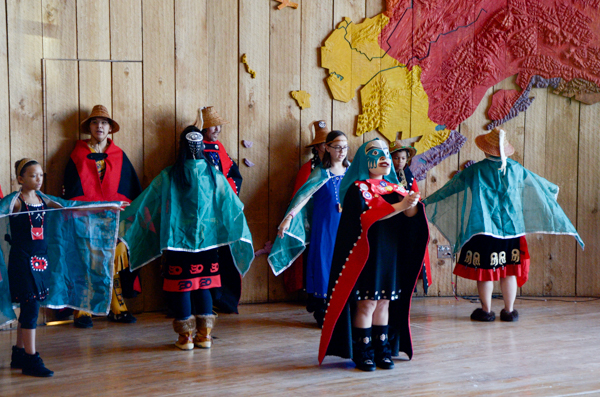 I wish I knew what the masked dancer was representing. This center is worth a much longer visit than we had time available.

The various structures throughout the grounds illustrated the winter dwellings of Athabascan, Yup'ik, Inupiak, Unangax, Tlingit and other peoples. 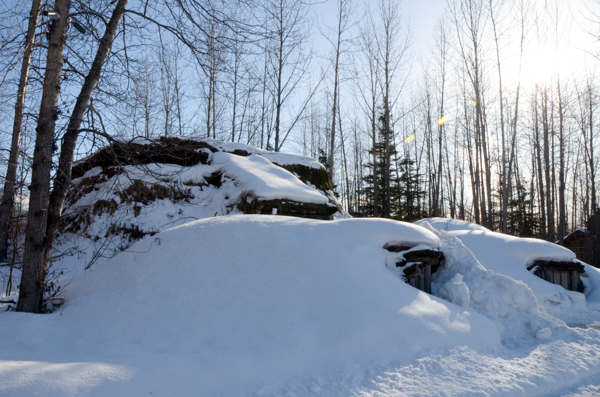 One of our first stops was this collection of buildings. The larger building in the back was called the "men's" house while the smaller buildings in front were the "women's" houses. Our guide said that there was no intent in this culture to exclude the women. The larger building was simply the "schoolroom" where children of a certain age were instructed by the men of the clan. The younger children were in the care of the women who insured that the little ones did not disrupt the training with their demands and antics.

Many of the buildings were designed with underground entrances for warmth. They were only used in the winter. 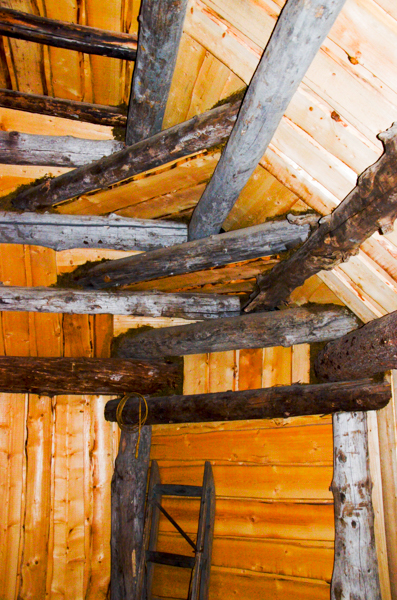 The "men's house" above had beautiful interior construction. The guide said that prior to the coming of the missionaries five was a significant number. That was why these buildings were traditionally constructed with five levels in the roof. Later three was used because of the association with the Trinity. 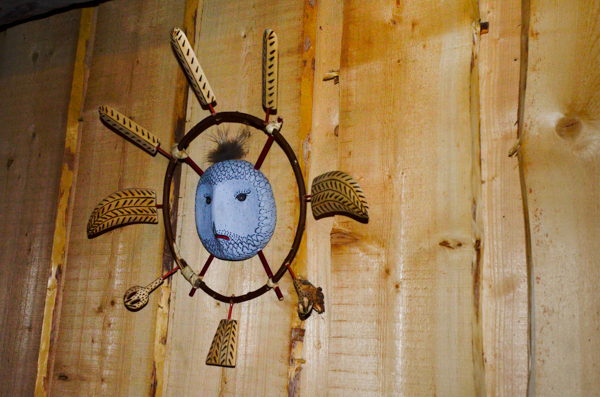 I don't know the symbolism of this figure on the wall, but I liked it:

This pair of buildings across the lake represented another of the native cultures. Although those of us from the "lower 48" tend to lump all Alaskan natives into an homogenous group, usually called "Eskimos," the cultures are quite distinct. Sometimes they speak languages with a common root, but some of the languages are completely different.

DNA analysis has confirmed that the Native Americans arrived from Siberia via a land bridge, but the timing of the various immigrations and the exact sources remains controversial. 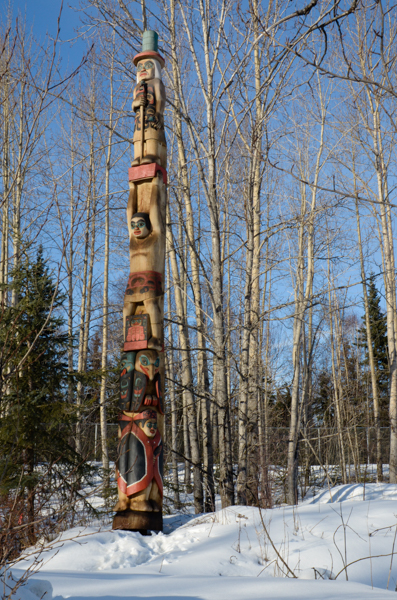 This totem pole is a modern interpretation of an ancient form. Our guide explained the symbolism in detail, but I recall only the overall message: The top-most figure represents the tribal elders who pass along the cultural knowledge to the youth of the tribe, represented by the boy and girl at the base.

At the time that Alaska was taken over by the U.S. there was a concerted effort to place the children in boarding schools where they were separated from their language and roots. Although this was done with good intentions, the result has been devastating in many ways. The Native peoples are now striving to recapture what they can of the old stories and languages. 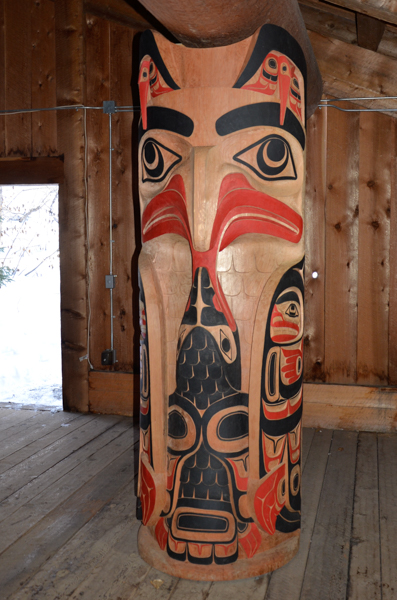 This building has four totem poles in the four corners. Each has a symbolic message of respect. Unfortunately we were running short of time and I didn't take pictures of each of the explanations. I believe this one symbolized respect for tradition. Others included respect for elders and respect for the environment. 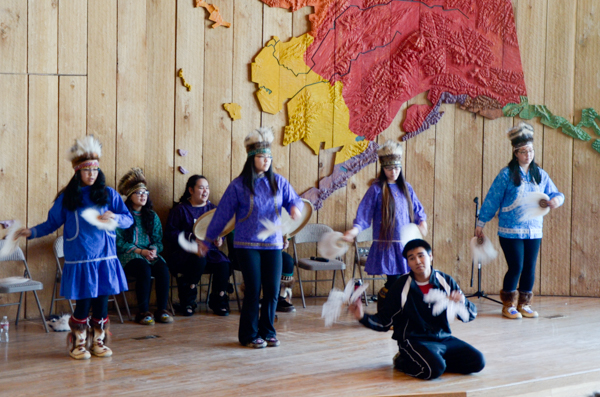 As we were leaving there was another group of dancers. Our guide explained that during the winter the buildings would be quite crowded with inhabitants. There was no space for active dancing. That helped me appreciate this dance in which all the movement was with the hands. The dancers never moved their feet.

From WWW sources, this appears to be the Yup'ik Dance tradition.

After a much-too-quick visit to the Heritage Center, we returned to Anchorage and the Running with the Reindeer.