PVS at the Iditarod

I was not aware that there are actually two "starts" to the Iditarod. There is the ceremonial start on the first Saturday in March in Anchorage. The actual start is the following day up the road in Willow. There are actually two versions of the trail, the "northern" and "southern" routes used in alternate years. They are the same along most of the route, but diverge between the villages of Ophir and Kaltag. Both versions are historical.

The Iditarod is one of the centerpieces of the "Fur Rendezvous" or Fur Rondy celebration in Anchorage. This commemorates the days when fur trappers came to town to sell their furs. Fur Rhondy dates from 1935. The Iditarod race was added in 1973. We enjoyed the ceremonial start and the very silly "Run with the Reindeer." 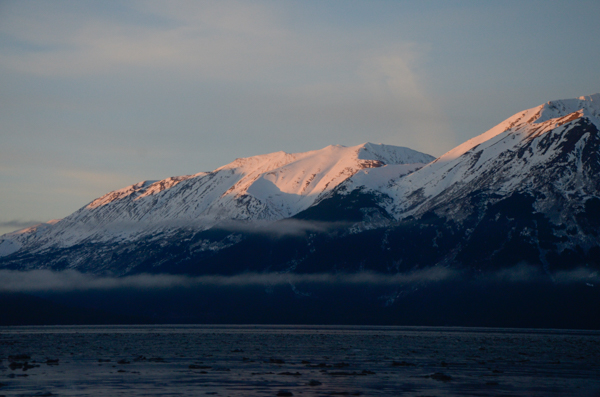 Our Magic Bus picked us up before dawn at the hotel for our trip into Anchorage. The Seward Highway runs along Turnagain Arm, so named by Captain Cook (or William Bligh of HMS Bounty fame) who explored the area in the 18th century searching for the elusive Northwest Passage.

The dark blotches in the water are brash ice. Normally the arm would have much more ice, but the coldest weather went south this year. 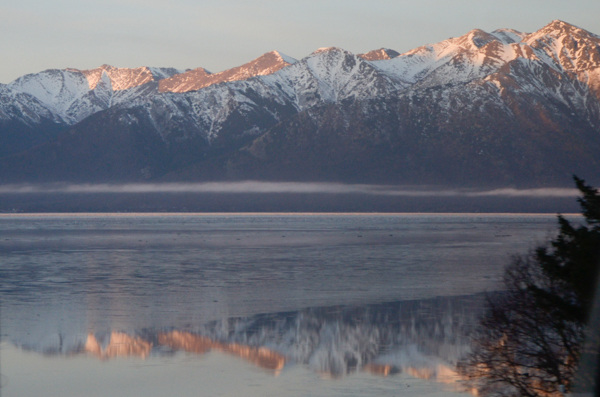 We didn't have time to stop so all my morning pictures were taken through the bus window. Jim and I were sitting on the opposite side of the bus from the water, so I'm surprised they turned out so well. It was a beautiful drive. 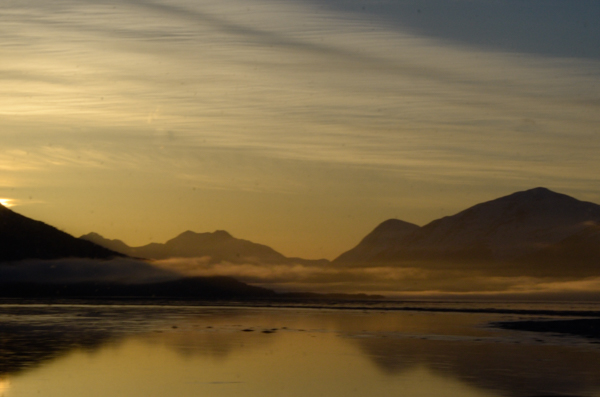 As the sun climbed higher, the light changed dramatically.

Although Alaska is known as the land of the midnight sun, at this time of the year we are close to the spring equinox and the day length is close to that of the lower 48.

We were told that the days lengthen by as much as five or six minutes daily. That's a huge change and it is much welcomed by the folks who live here. 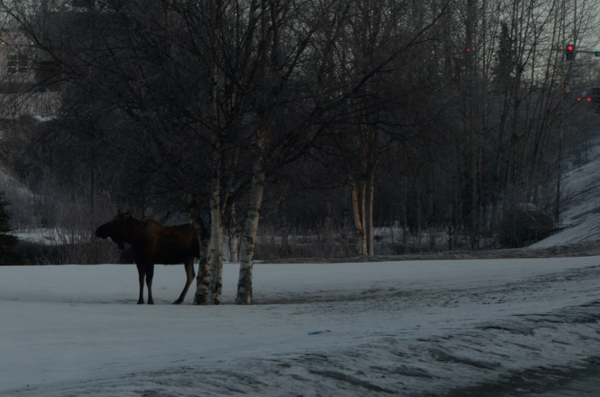 Anchorage is as much plagued by moose as suburban areas in Virginia are invaded by deer. This shouldn't be surprising since moose are the largest deer species. There are an estimated 1600 moose resident in the city.

We saw this individual browsing on trees alongside the street. (You can see the stop light in the upper right of the picture and an office building behind the trees on the left.) I can't tell if it's male or female since the males shed their antlers early in the winter. 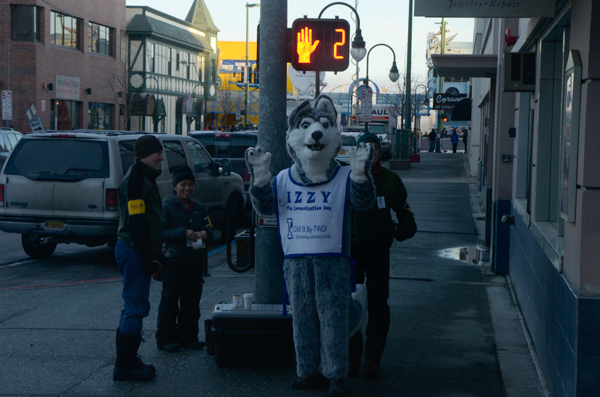 Immunization is a key emphasis of the celebration and "Izzy the Immunization Dog" was a mascot.

The race itself commemorates the successful 1925 effort to get medicine to Nome's children in the midst of a diphtheria epidemic. It was in winter and there was no access to Nome at the time by any other means than dogsled. 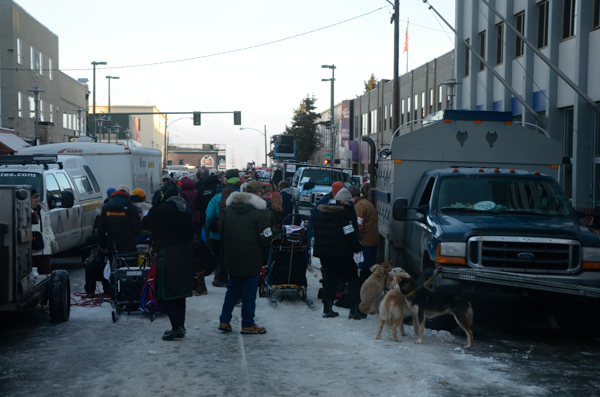 The various preparation areas were more interesting than the actual race. Most of the crowds seemed to be concentrated along the race course. At least at first we could actually go among the participants.

Later the areas were cleared of all spectators and you had to have an armband to enter. Nevertheless it was still less crowded. 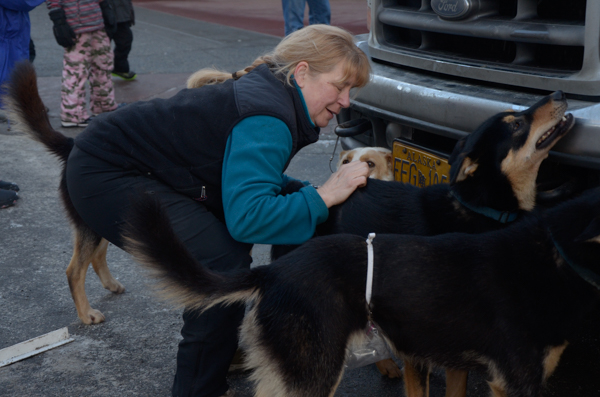 Every musher has a staff of volunteer handlers and assistants who help with the dogs. This lady must give a great back-scratch based on the expression of the dog receiving the attention.

This team was the only one I noticed with doggy-diapers. According to information on the WWW they collect urine so that race vets can check for performance-enhancing drugs.

Before the baggies were developed, volunteers tried to catch samples with little cups. Eeuu! 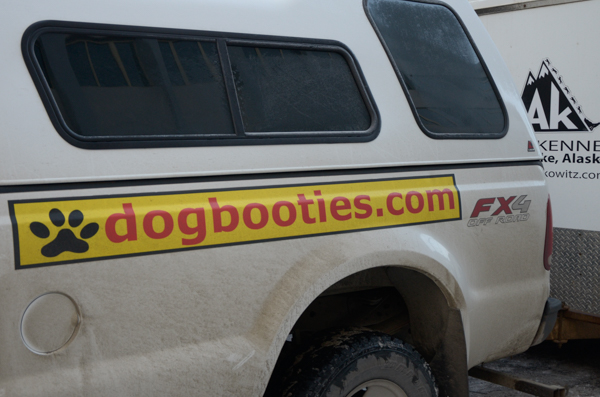 All teams had protective bootie. We were told that a sled team would wear through about 1000 booties during the 1000-mile race.

The teams consist of 16 dogs during the actual race. Only 12 dogs per team participate in the ceremonial start.

By the end of the race this year, however, no sled completed with the full complement of dogs. The finishing teams had an average of ten dogs. I expect relative warmth took its toll. Click for details on the 2014 finish. 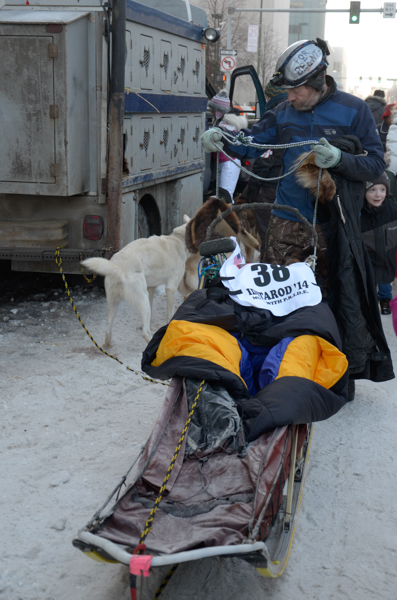 At the ceremonial start many teams pulled two sleds. Each sled had a passenger. There is an online auction for places on the sleds. Bidding starts at $500, but will go much higher for popular mushers.

Number 38 is Jim Lanier (73 and born in DC – we should recruit him for PVS). He has his sled all ready for his passenger. Even though it wasn't particularly cold, all the passengers were well bundled-up.

He did not finish the race this year. 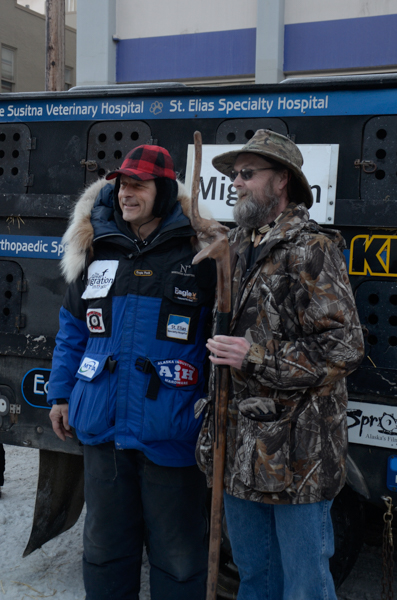 Martin Buser, on the left, has won the Iditarod four times – most recently in 2002. He was very gracious about allowing fans to get their pictures taken with him. Several years ago he was a luncheon speaker at the Arabian Horse Association convention held in Anchorage and we heard him there. He is an extremely entertaining speaker.

After gaining an early lead, Martin finished 6th after slightly over nine days on the trail. 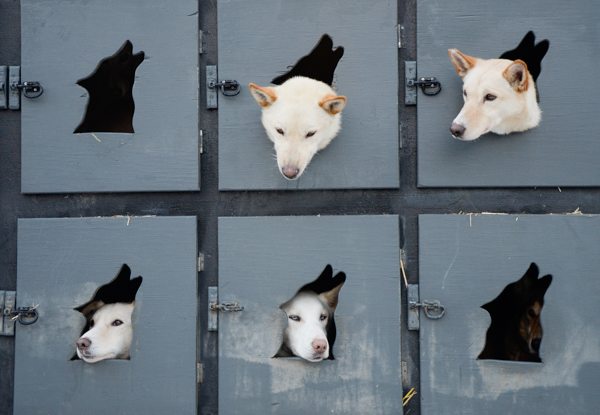 The dogs are transported in special trucks or trailers with compartments for each dog. Most were strictly utilitarian, but some were quite clever with these air holes shaped like howling dogs.

The occupants were having a grand time people-watching. 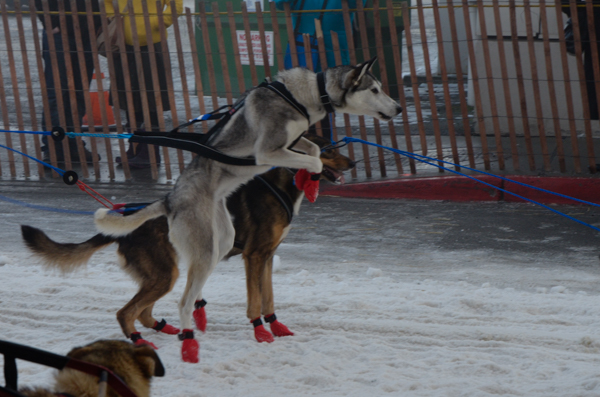 The dogs didn't seem to get excited or anxious until they were hitched up and then they were ready to be off like this one who seldom had "four on the floor." 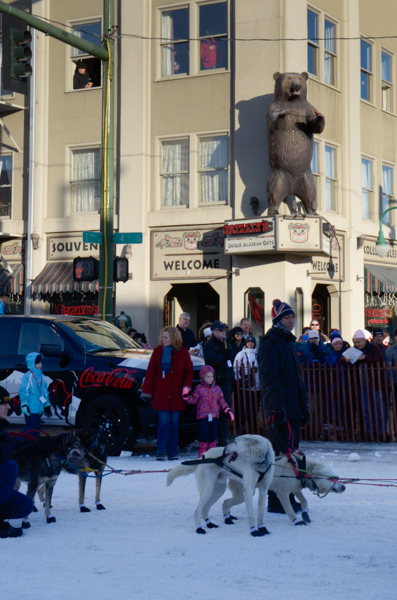 This is the first team that will be starting. It was a little confusing, but apparently the first few teams at the ceremonial start are also ceremonial in the sense that they will not be part of the actual race. This team was associated with last year's junior winner. Before they could get going, however, there were many announcements, the national anthem, etc.

It's a shame that none of the pictures has sound. Between the PA system, all the chatter among the spectators and the constant barking of well over 1000 dogs, it was pretty lively. 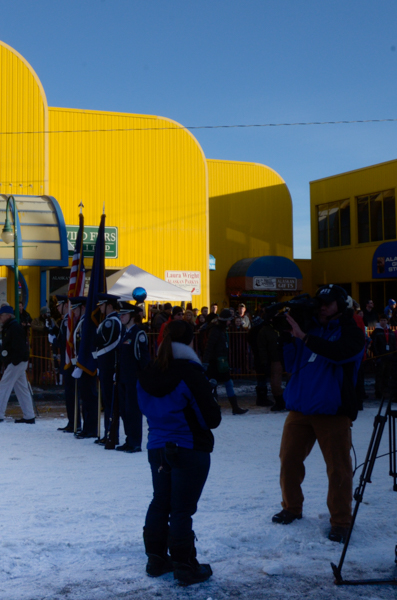 The color guard that will be presenting the flags for the anthems can be seen behind the television news crew.

It was very touching to hear the crowd respectfully singing along with the anthem. I generally get some strange looks for singing (and my voice isn't THAT bad). Of course the anthem as sung at most sports events bears little resemblance to the one we learned in school.

After the national anthem, the Alaskan anthem was played. I think fewer people knew it, because although they were respectful the crowd didn't sing along.

Finally the first sled was allowed to start. The dogs quickly got to work as they received a rousing cheer. 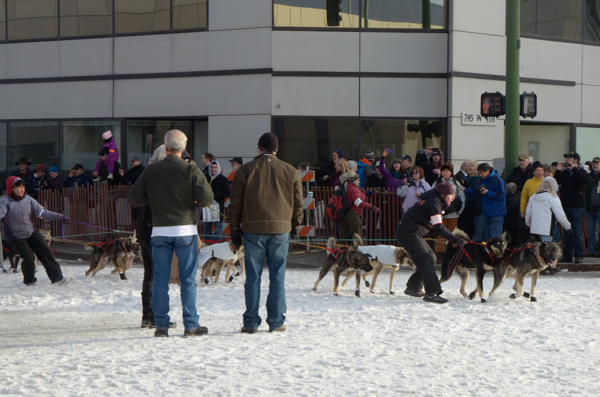 The enthusiasm of the dogs is evident as this sled moves toward the start. Each pair of dogs is accompanied by a handler whose job is to keep them from taking off. As can be seen at the left of the picture, the handler is almost being pulled off her feet. These dogs are strong!

Due to the lack of snow, the race organizers had to bring in tons of snow to give the sleds something to slide on.

At one point the trail lacked snow altogether for almost 70 miles. 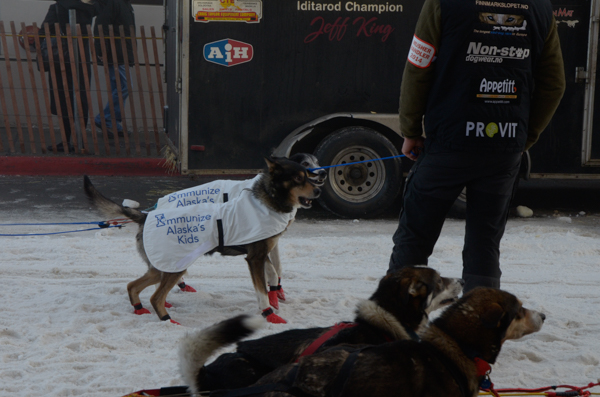 Many of the dogs wore blankets with the theme of immunization.

It is a modern tragedy that some unthinking people view immunizations as a plot to harm their children and that some quacks cater to their fears. They are all too young to remember the devastation of diseases like smallpox, polio, measles, etc., as well as the diphtheria that inaugurated this great endeavor. It's not just their children who will suffer for it. 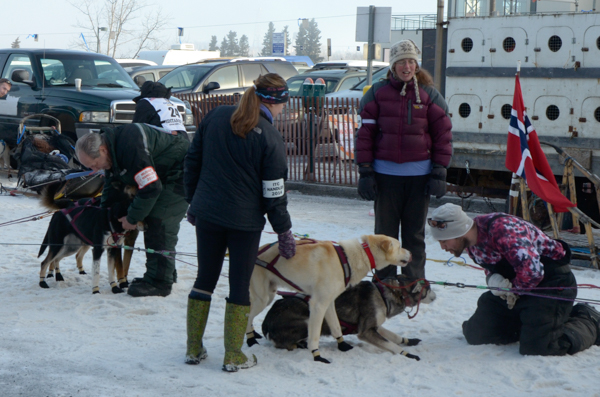 The race attracts teams from around the world. At least one team is from Norway. (The dogs with the red booties pictured above. This musher is Robert Sorlie. He has raced four times and won twice. This year, however, he finished 21st.)

One reason that Roald Amundsen was the first to reach the South Pole was his skill with sled dogs. His British "competitors" preferred ponies to dogs and many of them died as a result. 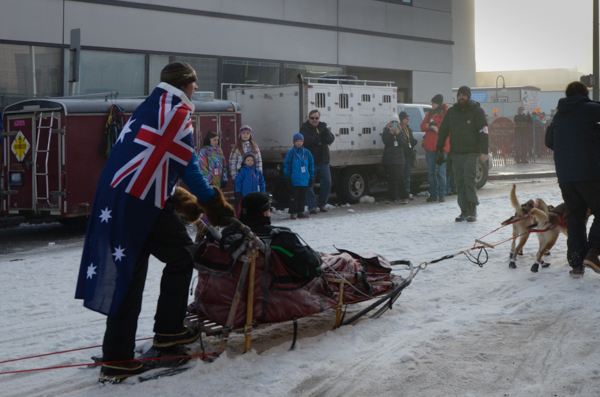 This was an Australian team. This musher is Christian Turner. There was even a musher from Jamaica!

A few years ago the rules were changed to ensure that people had to qualify their teams rather than simply fly in and lease a team. Many of the foreign competitors, therefore, reside and train in Alaska.

Christian eventually finished in 38th place, but he did complete the race. 20 racers scratched, including Jeff King, who led for much of the race and has consistently finished in the top ten. 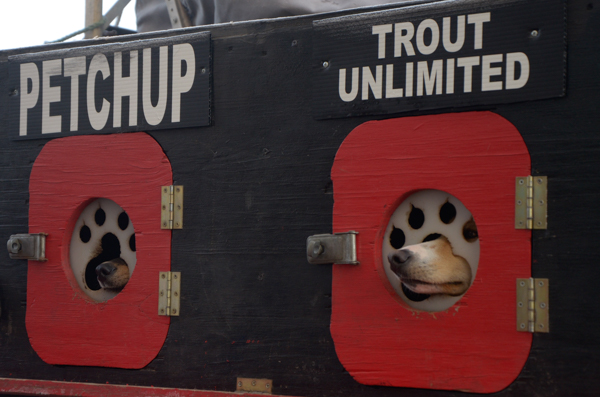 Corporate sponsorships aren't limited to Nascar. This team's truck listed a number of sponsors: the STPs of the dog-sledding world, I suppose.

Petchup makes condiments for your picky pet. Trout Unlimited is dedicated to preserving cold-water fisheries. They are currently engaged in the controversy over Bristol Bay mining and the danger to the world's largest sockeye salmon fishery.

Some competitors have a great sense of humor. I wonder if this team consisted of all female dogs? And a female musher? The pearl necklace is a nice touch.

We were told that in general males and females can be used on the same team. Since these are elite racing bloodlines, none of the dogs appeared to be sterilized in any way.

Checking on the WWW after coming home shows that Shameless Huskies is owned by Kathleen Frederick. She competed in 2010 but did not finish. She is not listed for 2014.

When lunchtime rolled around our group had reservations at a downtown brew-pub. The food was outstanding and the brews were good too. After lunch we boarded our bus for some time at the Alaskan Native Heritage Center. Click your back button or follow the link to join us.