The resort at Mt. Alyeska is the largest skiing venue in the state of Alaska. It is located in the town of Girdwood, which had been completely destroyed in the 1964 earthquake and subsequent tsunami. The current town-site of Girdwood is farther from the water and closer to the mountain. We are happy to report that we didn't observe any quakes during our visit!

Due to the warm winter, less than half the mountain was open. Practically all the intermediate trails were open, however, and those were the ones of interest to most of us. For our first day the resort had arranged for mountain guides for our group. We met three delightful gentlemen (Fred, Norm and Phil) who escorted us all over, taking great care that we knew how the lifts interconnected and all the various ways we could return to the hotel either by ski, tram or bus.

Most of the days we were at the mountain the weather was warm, the skies cloudy, and the snow slushy. The day we traveled to Anchorage, the sun came out and the temperature dropped. The following day had glorious sunshine, icy slopes and somewhat larger crowds. Our last day was a special Military Monday at the resort, so the crowds were out in force. 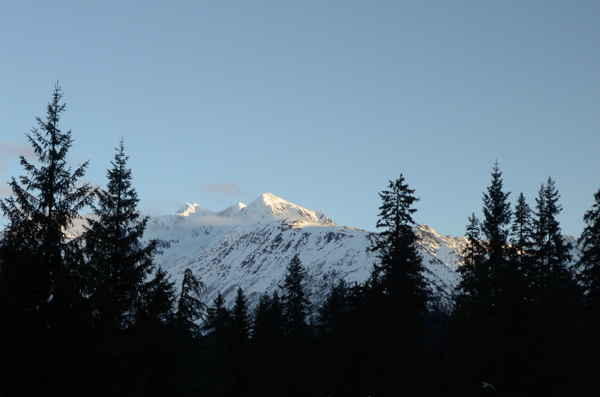 We arrived at the resort after a grueling trip complete with delayed planes. We staggered in at 2:30am local time (7:30am Virginia time after 24 hours of travel).

After a few hours of sleep, we rejoined the group for a welcome breakfast and an introduction to the resort offerings.

That first morning dawned clear and sunny. Having spent enough time in the mountains I quickly took a picture from our hotel window. It was prescient because clouds moved in and that was the last we saw of this view for several days. 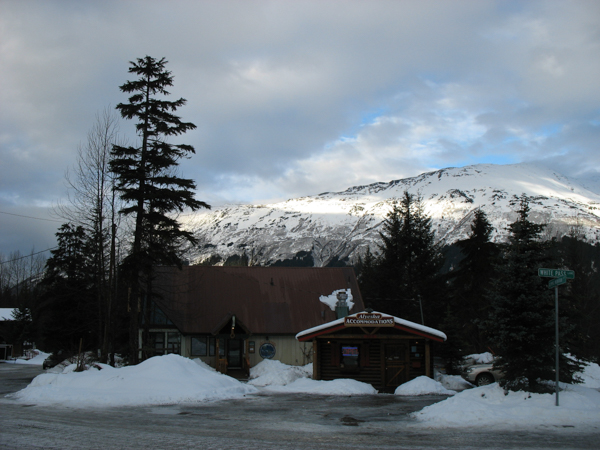 The first skiing day was socked in, the snow was treacherous, it was raining, and we were all sleep-deprived. Sweet!

I wanted my skis to be serviced so I quit early (after several falls in the slush) and dropped them off at the ski shop near the base lodge.

The hotel and base lodge are on opposite sides of the mountain, so the next morning Jim & I took the shuttle bus to pick up the skis so I could get back to join our group when the lifts opened. 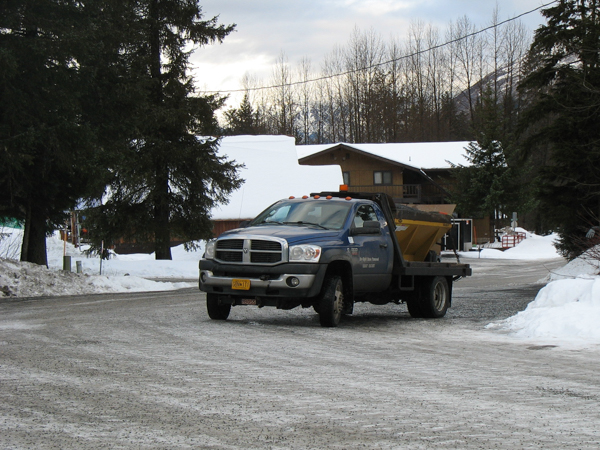 Although there wasn't a lot of snow on the slopes, the streets and parking lots were very icy. Instead of salt and sand, Alaskans spread pea-sized gravel on the roads. It is normally cold enough that salt wouldn't be effective at melting the ice.

Many of the locals had "chains" for their boots to help with walking. I was quite envious, but managed to keep my feet regardless. Jim did slip down on our last day, but avoided injury. 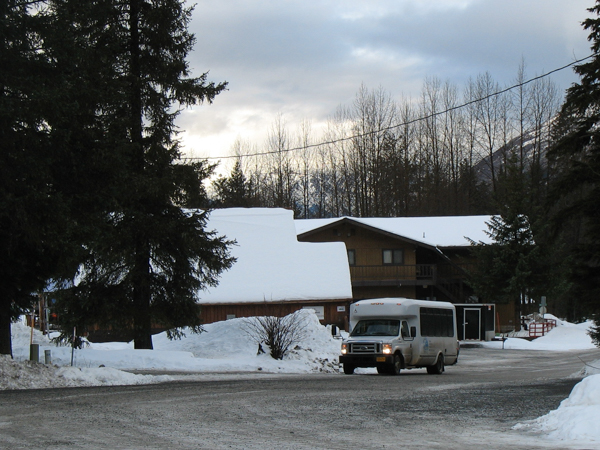 During our trip we got to know the drivers of the shuttle. Jim and I agreed that this was the friendliest resort we had ever visited. Everyone was cheerful and helpful. The shuttle drivers went out of their way to drop passengers off at convenient locations. 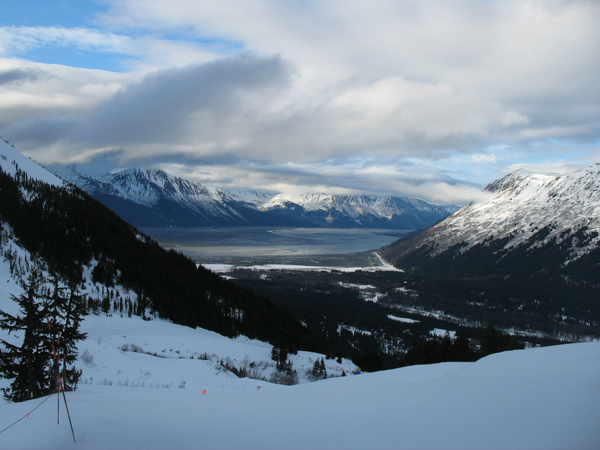 Turnagain Arm was visible from most of the mountain. I think this may be the only major ski resort located at sea level.

This offshoot of Cook Inlet has the second-highest tidal bore in North America after the Bay of Fundy. There is a complicated sequence of events needed to produce the bore and we did not observe one.

The flat light is evident in this picture. The combination of the light, the slush, and another fall convinced me to make it another short day. I even took the tram down to the hotel. Must be getting old!

This picture was contributed by Beverly Rettig.

She describes how she got it:

"On Friday, next to chair 7 just outside the hotel, there was a course set up for snowboarders and skiers to freestyle. I was set up just as a group were coming down one at a time doing tricks... unfortunately my camera required battery replacement just at that moment. I swapped batteries in time to catch the last one of the group catch air and complete a 360 degree rotation." 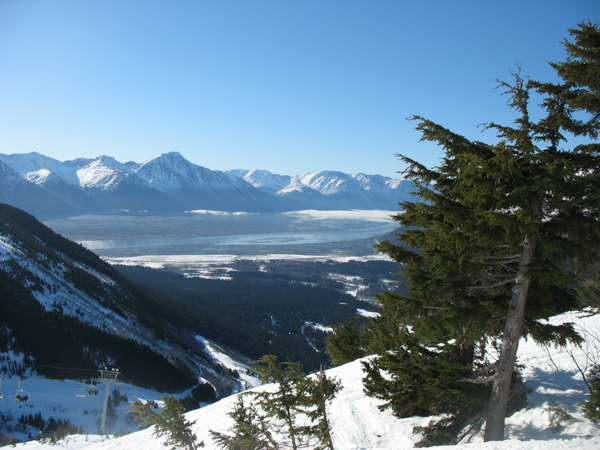 By Sunday the weather had improved considerably. The sun and weekend had brought out more skiers. That and the now-icy conditions limited my final day of skiing to a circuit of the mountain to take pictures.

"Downtown" Girdwood is visible from the slopes. The population is a bit over 2000 people, but most stores and services are located in Anchorage, 45 minutes away. 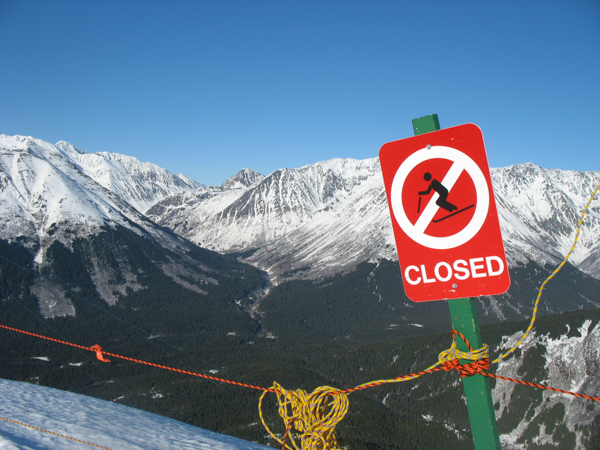 The lack of snow had most of the backcountry slopes accessible from the area closed. The only way to get off the groomers was to take a helicopter. Even so, weather caused cancellation of the heliski runs on at least two days. 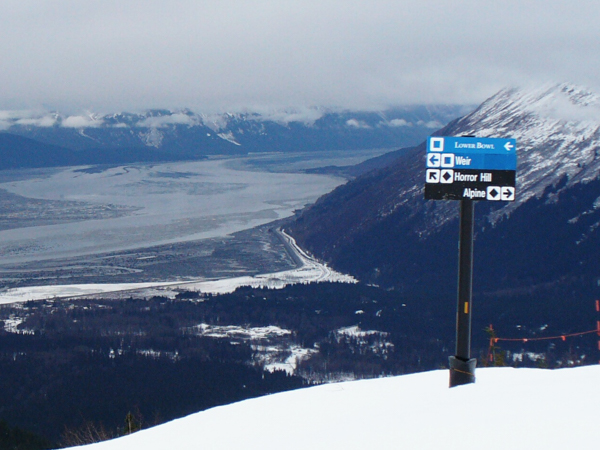 Alyeska is also noted for it's long black runs. Beverly Rettig took this picture of "Horror Hill." What a name! 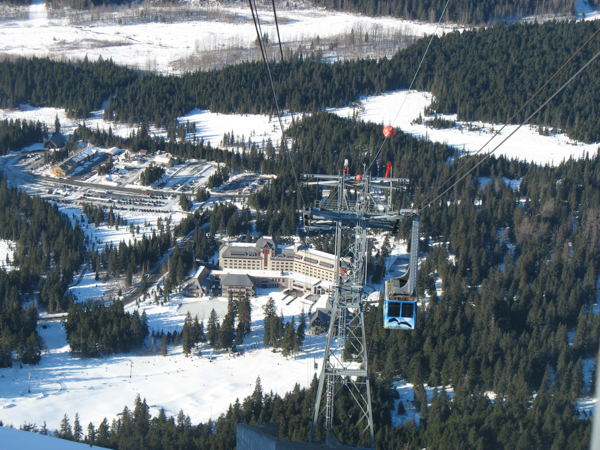 The tram station was located right next to our hotel, shown here at it's base.

I had a pleasant chat with one of the tram operators who noticed my Chamonix fanny pack. He had come to Alaska from Colorado for the backcountry skiing and was disappointed in his first winter. His buddy, who had gone to France in search of off-piste adventure, found more success. 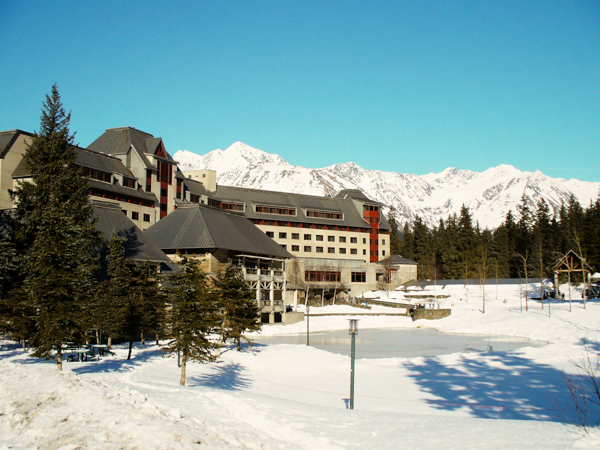 This picture of the hotel was taken by Beverly Rettig.

The skating pond looked less and less safe as the week went on. By the end of each day it would be covered with a layer of meltwater.

Click your back button to return to the intro page or click to go mushing with us.