My first outing with the club was to the local Devil's Backbone Brewery (DBB) "outpost." We got to combine a tour of the brewery, an opportunity to take pictures of this & that, and a chance to taste some of their brews. What's not to like? Jim even decided to come along. DBB Vienna Lager is an old favorite from our days working concessions at  the Theatre at Lime Kiln, but the others we tried were all new.

What follows are my first attempts at taking pictures as pictures rather than as narrative. 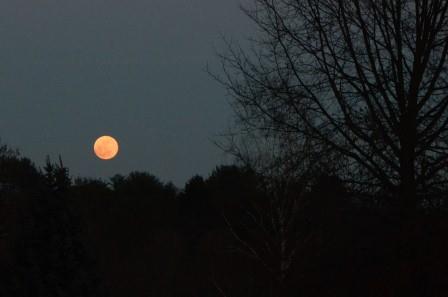 OK, I'm still into serendipity. As we were on our way to DBB, we saw this incredible moonrise just as we were driving down New Cameron Drive in our neighborhood. I shot this picture through the car window.

There's a blue spruce on the left, a paper birch toward the right. Would have liked them to show up better, but I'm not sure how to make that happen in such a situation.

I think this was called the "mash tun." it is the vat that receives the malt, water, etc. The fan stirs everything together.

What I really liked about this image was the fuzzy shadow of the DBB logo etched into the glass cover of the vat.

What I didn't like was the glare of the overhead light. 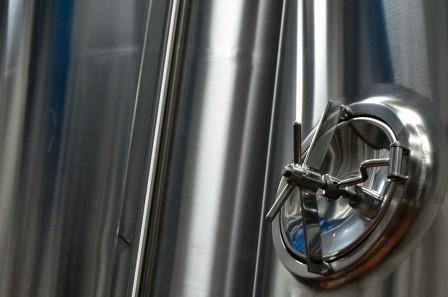 There are huge stainless steel vats used to ferment the beer. They are visible from US 11 as you drive by the brewery.

I don't remember the function of this particular valve, if our guide even mentioned it, but I liked the colors and the shapes.

Throughout the brewery there were pipes carrying this or that to one place or another.

I liked the interlaced colors. I especially liked that they were red & blue (long story there!). As far as the brewery was concerned the colors were meaningful, but I forget why. Doesn't matter.

I took very many pictures of pipes. This was the one that I liked best. 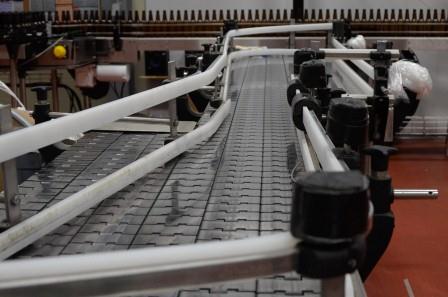 I LOVE bottling runs (so many great stories). It would have been a treat to see this one in operation, but it was nice to look at anyway.

Why do I like this picture? The bottles in the background. The swoops & swerves. The fact that it's a bottling run.