AHA offered a horse farm tour and bourbon tasting on Tuesday prior to the start of the convention. I thought that I had signed us up for this, so we drove to "the other Lexington" on Monday. Problem: we were NOT signed up. Not a problem: there is plenty to do in & around Lexington.

After reviewing several alternatives we decided to visit the Shaker Village at Pleasant Hill, about 30 minutes south of of town. Good choice! We just scratched the surface of this fascinating site. Another entry on the list of places to revisit. 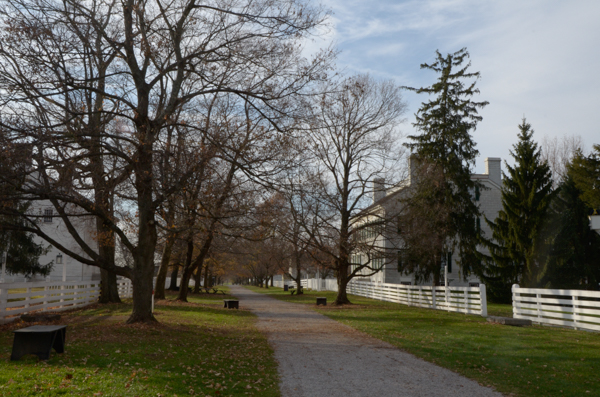 Early in the 19th century a group of Shakers formed a community at Pleasant Hill. The settlement prospered for many years and continued into the 20th century. It dissolved in 1910 and the last member, Sister Mary Settles, died in 1923.

In the 19th century and well into the 20th the turnpike from Lexington to Harrodsburg ran through Pleasant Hill along this road. 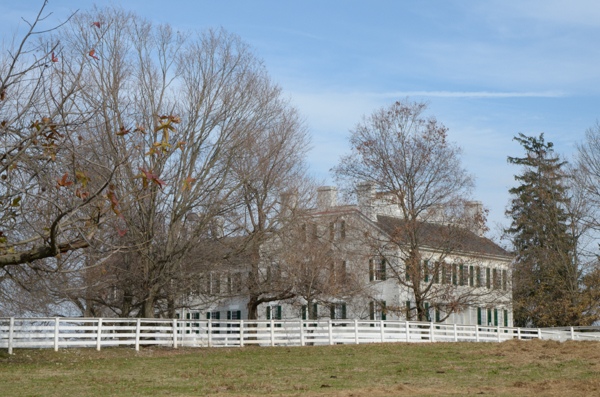 Residents of the village lived in "families" of brothers and sisters. Men and women had different tasks, but equal rights and share in governance.

This building was the home of the "Centre Family." Its location across the lane from the meeting house indicated that it housed the most spiritually mature members of the community. Many of the exhibits we visited were in this building. 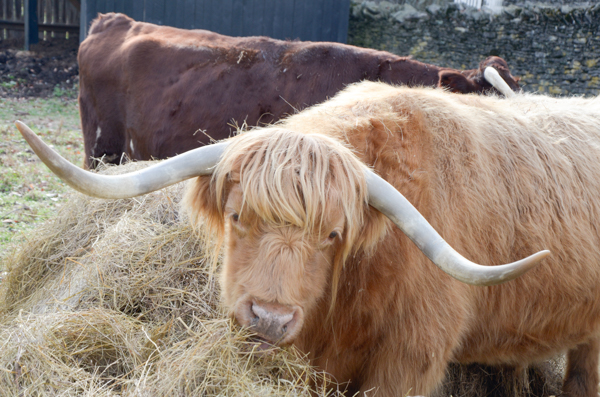 These two steers munched away at their hay. I'm pretty sure this one is a Highland. 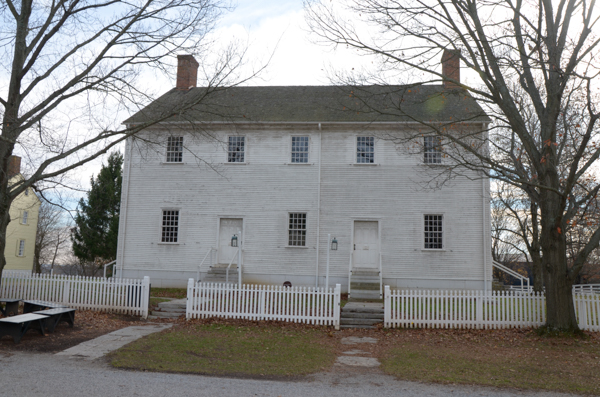 Although the men and women in the community had equal rights, the sexes remained separate – even to the extent of having separate entrances and staircases.

The meeting house illustrates the "separate but equal" entrances for men and women. I don't know which was which. This building was locked, so I don't know what it looked like inside. Probably very plain. 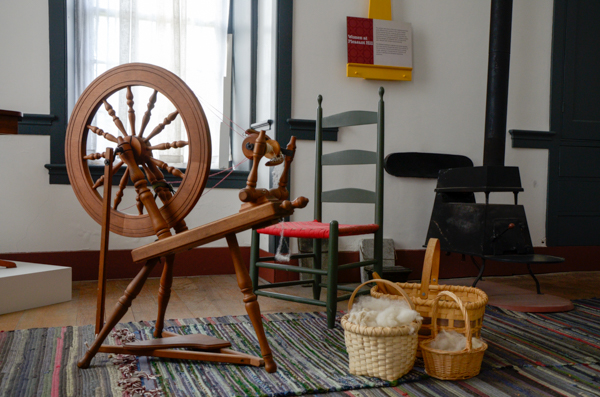 Some of the women's working tools.

The stove in the background was a Shaker modification of a Franklin stove. The upper segment was an early "catalytic converter" of sorts. It combusted the smoke coming out of the primary stove resulting in more heat and fewer emissions. The length of the stove pipe also allowed more heat to be extracted before routing the remainder of the smoke into the chimney.

By the time the smoke reached the chimney, it was cool with less creosote – limiting potential chimney fires. 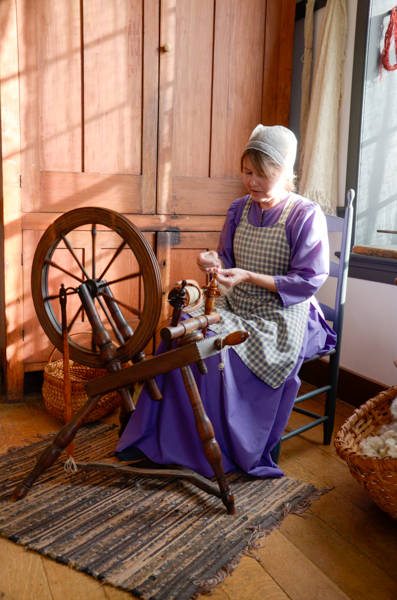 This volunteer demonstrated spinning in one of the upstairs rooms.

The typical fibers used by the community were wool and flax. They could be woven together to create linsey-woolsey, a common fabric during the heyday of the community.

The production of flax is complicated and arduous, so she said they stayed with wool for the demonstrations.

The Shakers dressed simply, but the style of their clothes was not dramatically different from the time in which they lived. Modern Shakers, of which there are a few, do not stand out in their dress.

The demonstrators adopted the styles used by the community in the 19th century. 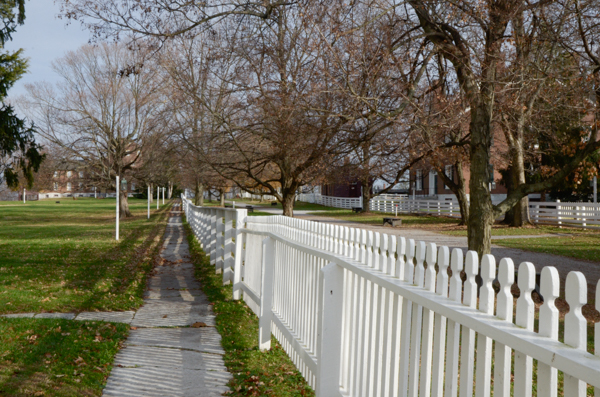 The brick building across the lane on the right is the "trustees' office." Nowadays it contains the restaurant and hotel office.

When (not "if," I hope) we get back here, we plan to stay in the hotel. Rooms are scattered across several of the old buildings on the property. 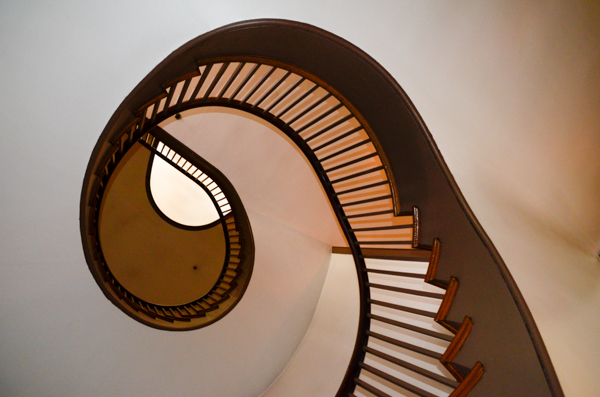 The trustees' office features a pair of helical stairwells. They sweep up the three stories of this building.

This is the view looking up from the ground floor. 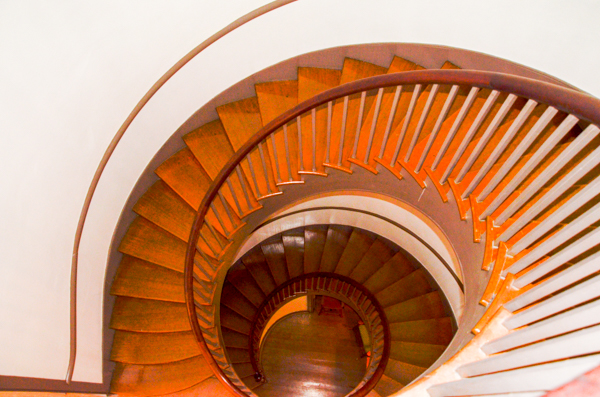 And down from the top.

It's a bad place for vertigo! 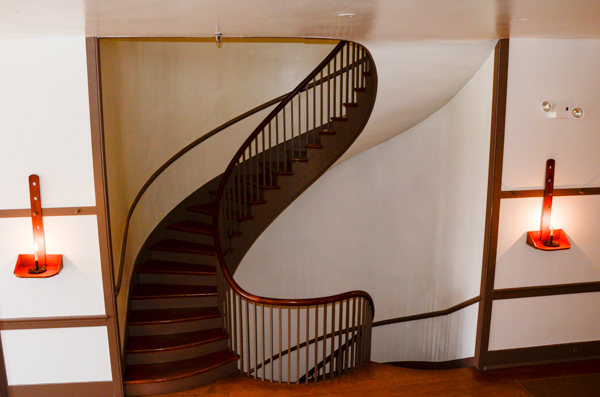 This is the stair connecting the 2nd and 3rd floors. As all Shaker productions, these stairs are notable for their beauty as well as the simplicity of design.

I doubt they were "simple" to construct! 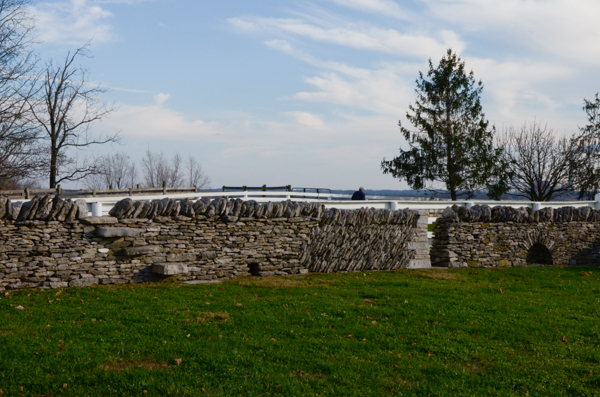 I love dry-stacked stone walls. Our time hiking in England exposed me to a variety of styles. This wall incorporates a number of them including a stile for crossing it.

There were no descriptive signs, but I'm guessing this was a demonstration project rather than a functional wall. 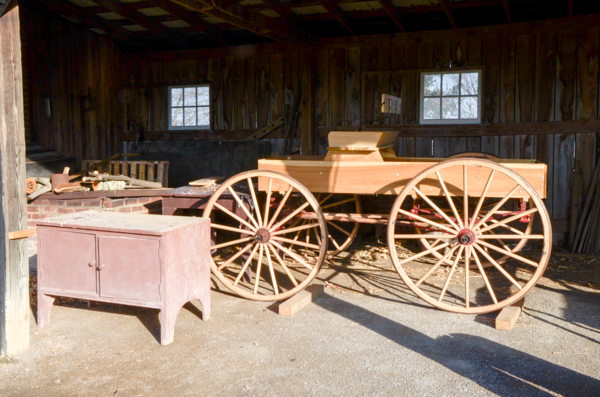 A cart in the workshop illustrates traditional construction techniques. There was no demonstrator on this day. I think their season was winding down in November although we saw Christmas lights going up, so they may have a lot of holiday visitors.

Not sure what the Shakers would think about Christmas lights. 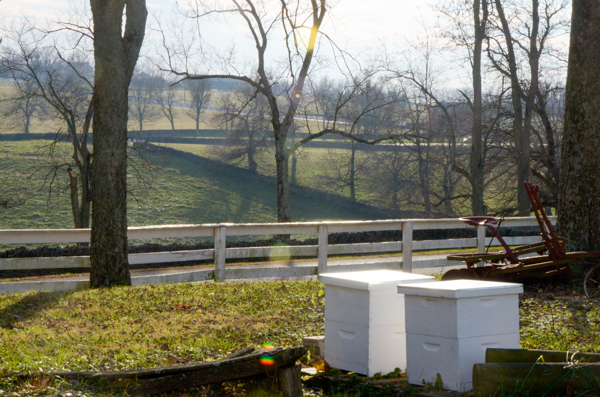 If you ignore cars passing on US-68, this view could be from another century. 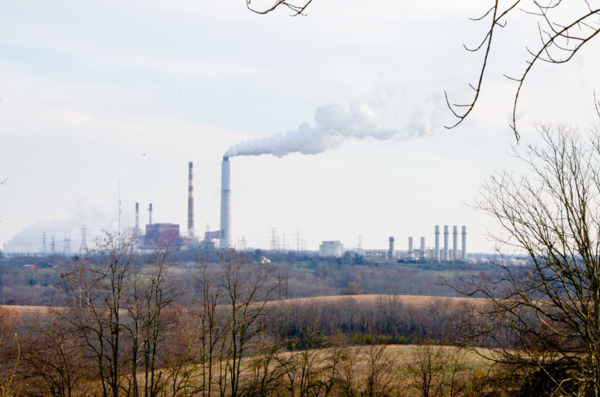 Looking in a different direction from more-or-less the same spot shows a less bucolic view. It is the E.W. Brown Generating Station. 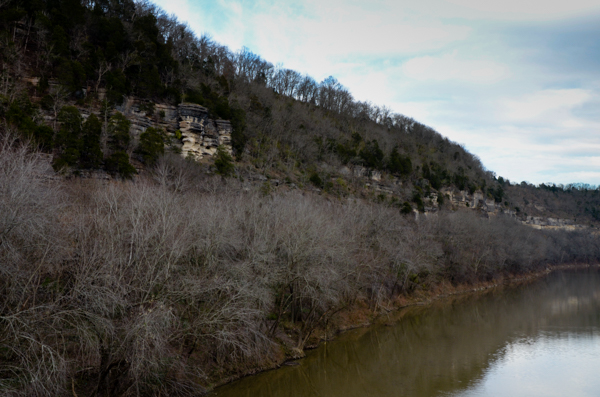 We crossed the Kentucky River returning to Lexington. These limestone bluffs are called the palisades and are home to a number of unique species of plants and animals.

The road twists and turns along the river for several miles but there is no place to stop and take pictures. It is a hairy drive – especially if the driver is trying to get a glimpse of the breathtaking scenery!

Beside the bridge over the river, there is a small road that turns off so that I could park and risk life and limb crossing the bridge. Wise Jim stayed in the car! 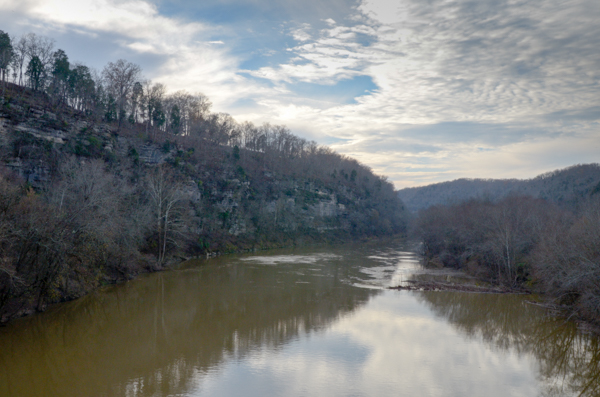 The picture above is the view upriver from the bridge. This is looking downriver.

The bridge is called the "Brooklyn Bridge" although no one seems to know why. It replaced an earlier bridge that collapsed in the 1950's. 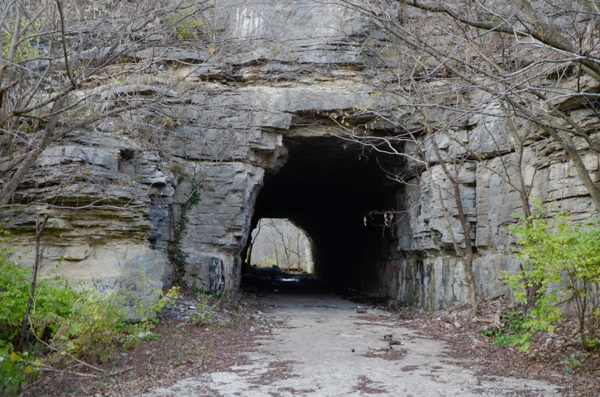 When returning to the car I noticed a track leading along the river leading to this tunnel. It is the Boone Tunnel and connected to the original bridge. The description from the Jessamine County Guidebook states:

The first bridge at this site, built in 1871, was a 250 foot long iron truss bridge with wooden planking and was accessed through the first tunnel built for highway traffic in Kentucky.  In 1955 a food service delivery truck was going south and one complete span of the bridge collapsed into the river under its weight.  The fall broke the driver's back in three places, but he managed to get out of the truck.  He survived, sued the state for its unsafe bridge, and was awarded $50,000 by the judge.  The Governor, having such power at that time, reduced the award to $10,000 saying that no man was worth $50,000.

Click your "back" button to return to the index.