On the Silk Road in Central Asia
Uzbekistan – Khiva

We had unexpected time on the day of our arrival to begin our visit of this fascinating place. The next morning our local guide joined us for a formal tour. 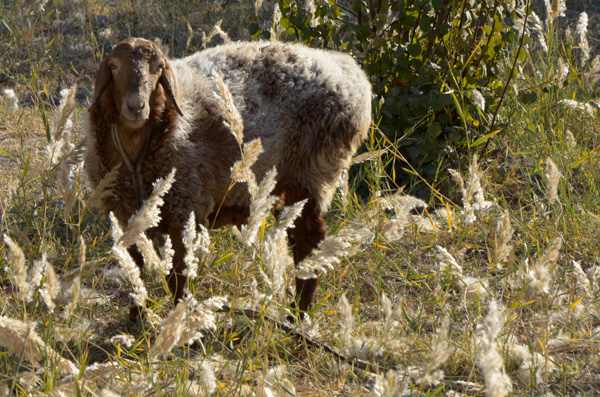 Seems odd to come all the way to Central Asia and come home with a picture of a sheep, but I saw a variety of livestock in the urban areas. This one was tethered just outside the walls of the inner city.

Here in Lexington feathers have been flying over a modest proposal to allow keeping a few hens within the city limits. The original proposal failed to get approval, but another one is on the way (and eventually passed). 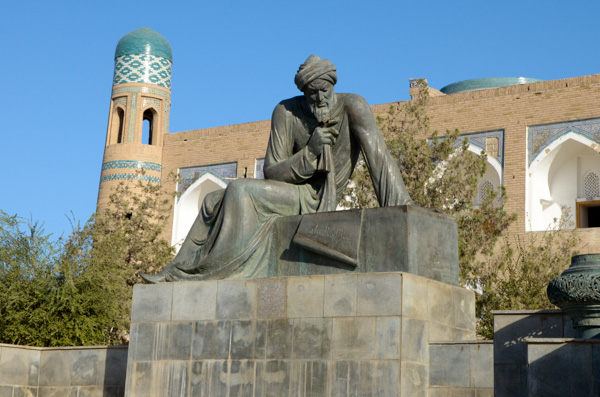 As we walked around the city walls, our guide pointed out this monument to Al Khorezmi, an 8th century mathematical genius. The term "algorithm" is derived from his name, which is Algorismi in Latin. The term algebra comes from the title of one of his books.

This spot was of particular interest to Jim and the other mathematician in the group, Dave Carlson. 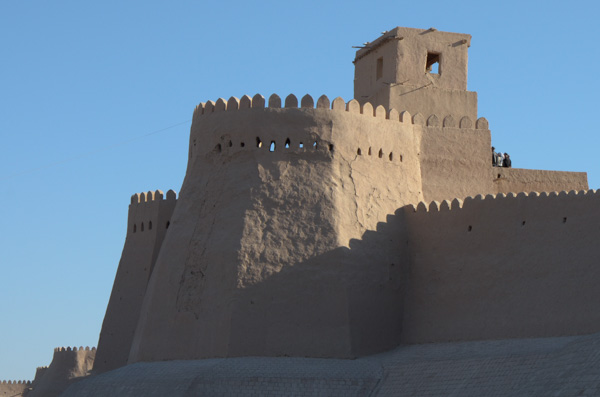 The exterior of the Khiva Ark, which we had visited the afternoon before. We had climbed all the way up into the tower. 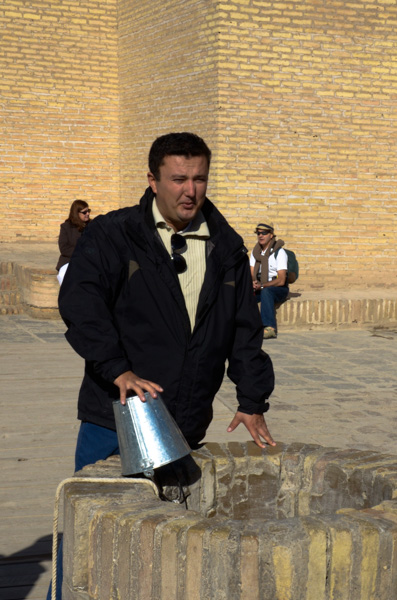 Legend says that Khiva was founded and named by Noah's son Shem who miraculously discovered water here. We asked our local guide, shown here by the well in the Ark, if "Shem's well" still existed. He replied that he could show us as many Shem's wells as we could possibly want to see!

What he illustrated here was the custom of predicting a child's sex. If the bride and groom come to a well and throw a bucket down, the bucket will either land upright or upside down making a different sounding splash. (I forget which splash predicted which sex.)

We wondered if he was serious until we saw this in practice at another well later. 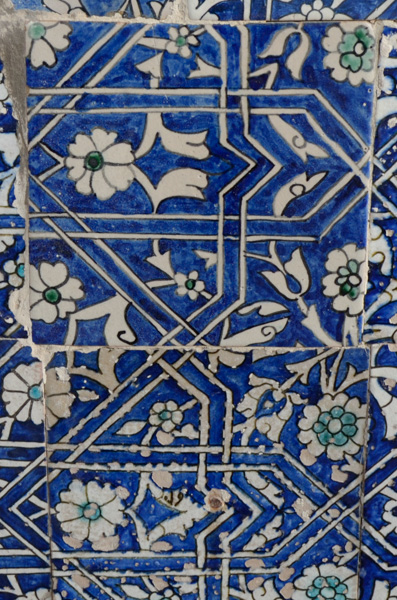 Exquisite majolica tiles covered many of the buildings. Of those, many were completely or partially restored. Our guide told us how we could recognize original versus reproduction tiles.

The picture shows two complete tiles. The lower one is original as indicated by two things: the nail in the center that affixes it to the building, and a number in Arabic script (looks like black squiggles) to the left of the nail. The reproduction tile on top has neither of these things. It has been created for this spot and set in place with cement or grout.

The numbers were necessary because the tiles were made elsewhere. There had to be a key indicating the correct placement on the wall. 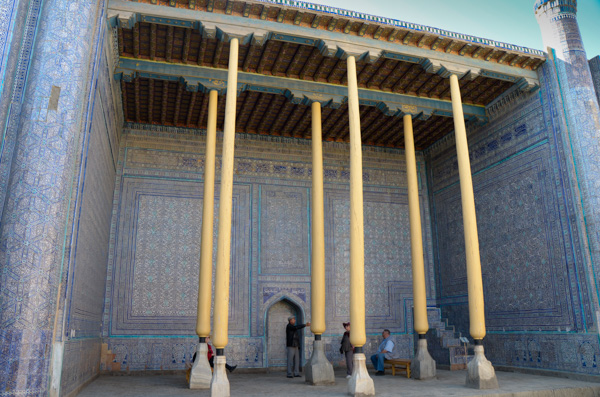 The tiles covered every wall of this mosque – including the stairs that the imam mounts for the service.

Note how it is not enclosed on all sides. 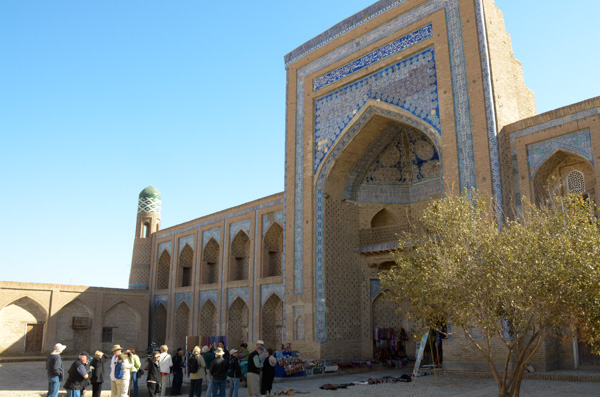 By this time my head was swimming with Madrassahs so I can no longer remember what was supposed to be memorable about the Madrassah of Khurdjum. It had a museum. It had shops. It had an acrobatic show. But what I really remember is in the next slide.... 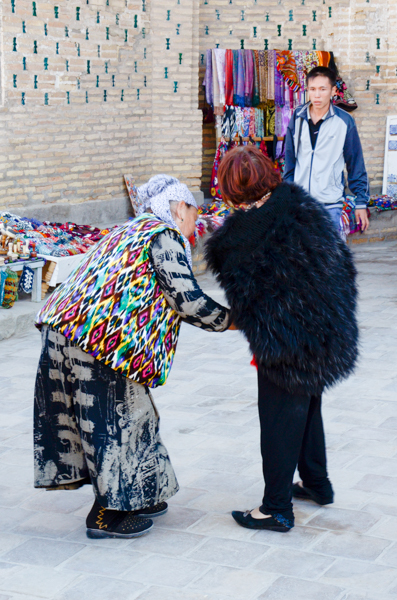 While we were listening to whatever it was we were SUPPOSED to remember, these two women came screaming (literally!) out the door. The woman in black had shop-lifted a scarf and wrapped it under her furry coat. The shopkeeper was determined to get it back. They struggled over it and the woman in black fled.

The shopkeeper retired in triumph, but shortly thereafter came hustling back out shaking the scarf and took off through the gate. I gather it had been damaged during the struggle and she was in search of the perp.

This was the only incident of thievery that we saw. Everywhere else I've traveled we've been constantly warned about pickpockets and such, but rightly or wrongly we felt safe from predators here – even at night walking the dark streets of the cities. 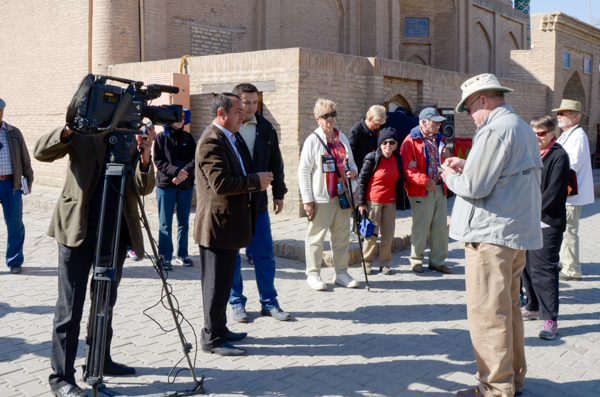 As we walked to a restaurant for lunch, we were startled to see a TV camera crew doing "man on the street" interviews. They approached our group and we nominated Jim Massie as spokesman. Jim, who is a retired Episcopal priest and accomplished speaker, gave a marvelous interview about our experiences in Uzbekistan. We keep hoping we'll see him on News At Eleven, but have yet to do so. 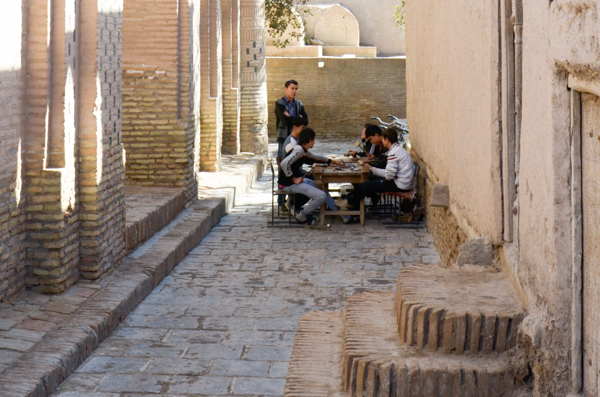 There were numerous handicrafts for sale in Khiva in addition to the standard tourist stuff. The way to and from our hotel passed a blacksmith's shop (one couple stopped in and had a nice chat with the smith's son). Numerous women knitted slippers– a local specialty. This group of young men made a social time of their leatherwork.

The minaret of Islam-Khodja dates from the early 20th century. It is the tallest minaret in Khiva.

This street leads to the Pakhlavan Makhmud mausoleum. I got a picture of its dome on our first afternoon here. We will be visiting it this time.

Workers were cleaning the mausoleum so there was scaffolding all around. That discouraged me from trying to get a picture of the interior. The holy man's cenotaph is behind and to the left of the imam.

I've forgotten the significance of the food. After the prayers, pilgrims took a bite. 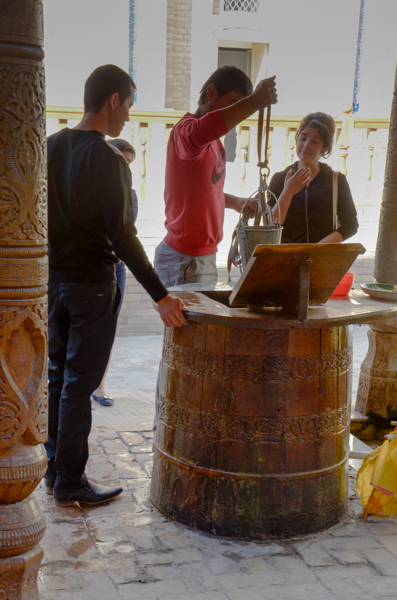 This well was in the mausoleum courtyard. While we rested in the shade, several couples dropped the bucket into the well just as our guide had described earlier in the day.

Sometimes they were there with friends and there would be much giggling at the result.

Diviners used a ladle to share the water after hauling up the bucket. 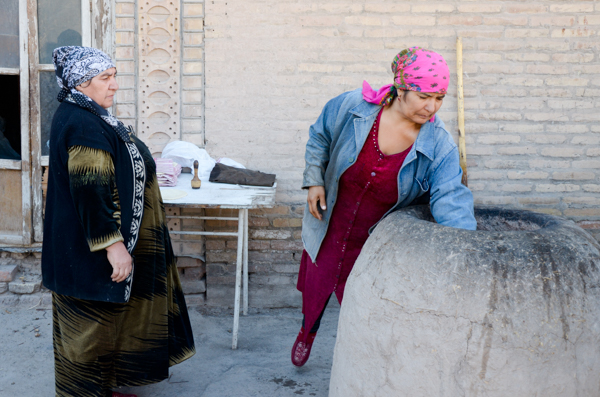 As we walked around town toward our next stop we came upon these women baking bread. The woman in red has a huge oven mitt that she uses to place and retrieve the bread inside this tandoor oven.

The oven is first heated by building a fire in it. Once the fire has burned down to coals, it is ready to cook. According to WWW sources, the heat can reach 900° F.

Instead of being placed on racks, the bread is slapped on the side of the oven. It sticks to the surface and cooks from the residual heat. Finished loaves are on the table in the background.

I had seen the ovens earlier but was unable to comprehend how they could work until we saw this one in action. I'm still puzzling over how one of these ovens could be used to cook tandoori chicken. 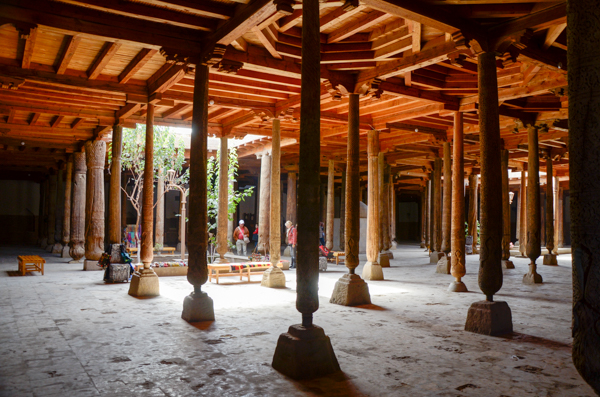 The masjid-i jami was built in the 10th century and reconstructed in the 18th century. The 218 columns are all different and a few may date back to the original building. The name signifies that it was the principle mosque in the city.

The openings in the roof provide light. 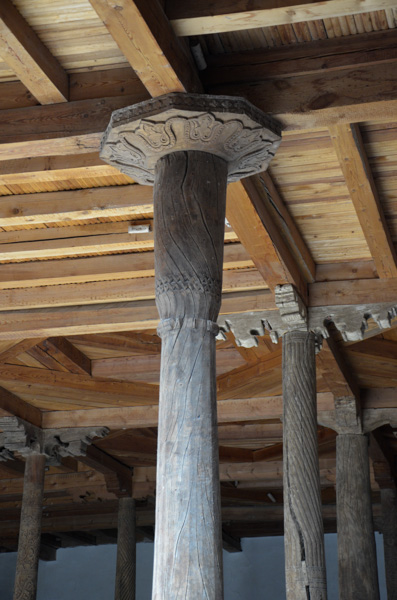 In addition to the columns being unique, their stone bases vary and also the capitals. 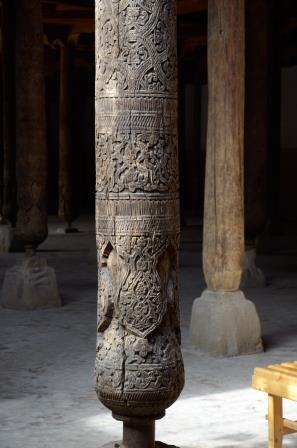 Retired columns and brand-new ones were stacked along the walls waiting to be used as needed.

After the mosque we visited the khan's harem. It is reached either by convoluted paths (naturally) or by secret passageways from the palace itself.

The gate at the bend in the road is yet another mausoleum for wandering holy men. 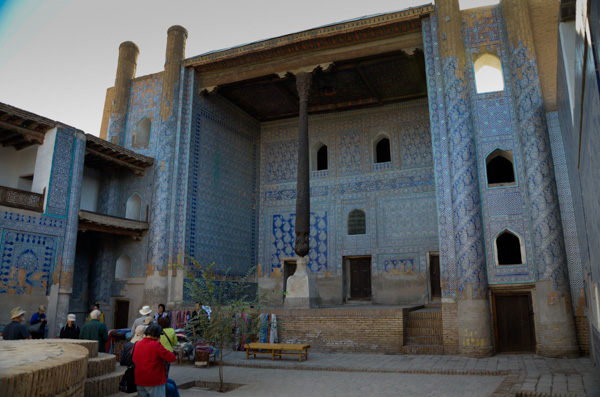 One of the places where the khan held court.

The cover over the dais, which rises above the surrounding walls, is oriented to divert cooling breezes into the courtyard.

In the winter a yurt on the circular raised platform at the lower left of the picture provides a cozy nook. 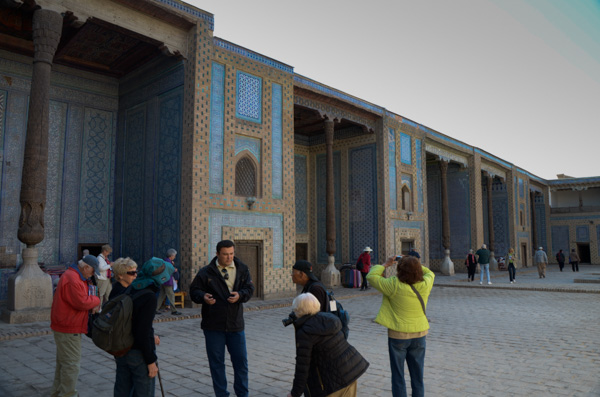 The niches to the left are where the khan's principle wives held court in the harem. 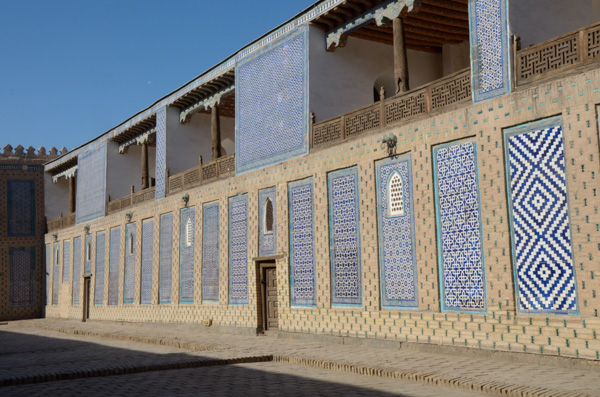 Across the courtyard was the home of his concubines. 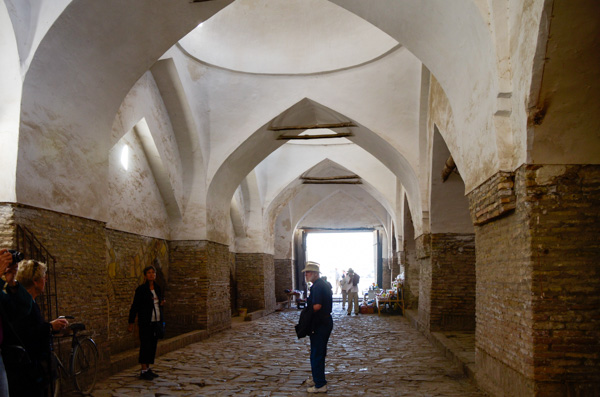 Khiva was the center of a thriving slave trade. Slaves were usually Russians captured in raids and brought to the desert.

This is the slave market. 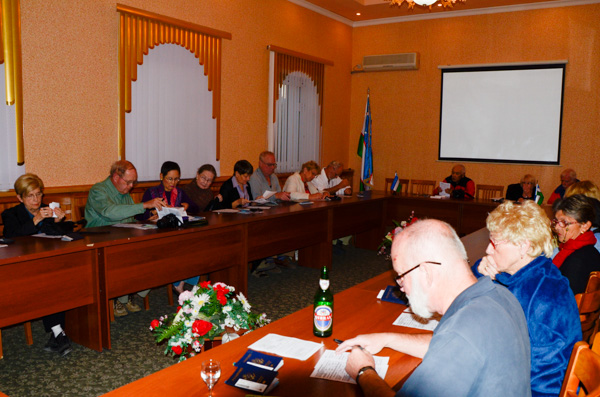 Our final night in Khiva we had another session on filling out forms. Of the five countries we visited, Turkmenistan is the hardest to get into.

The Turkmen are particularly interested in carpets. If you travel INTO Turkmenistan with a carpet, you must have it declared and approved on the customs declaration or you will not be able to take it OUT of Turkmenistan.

Jama emphasized that Turkmenistan was a paranoid society. The bus was likely to be bugged. Perhaps the hotel too. We were not to ask the guide embarrassing questions because it would be cruel to put him on the spot. We were becoming paranoid ourselves! 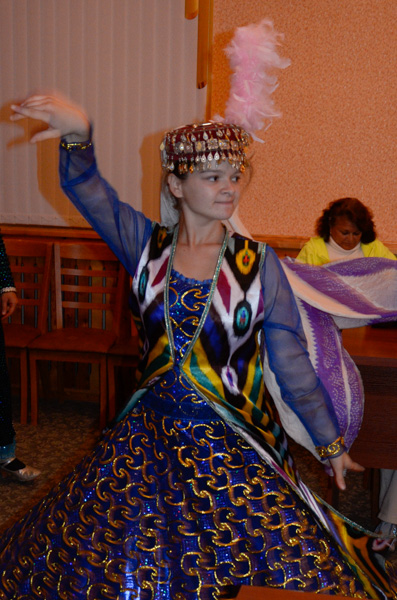 After completing our forms we enjoyed another folkloric presentation with singing, dancing and instrumental performances. 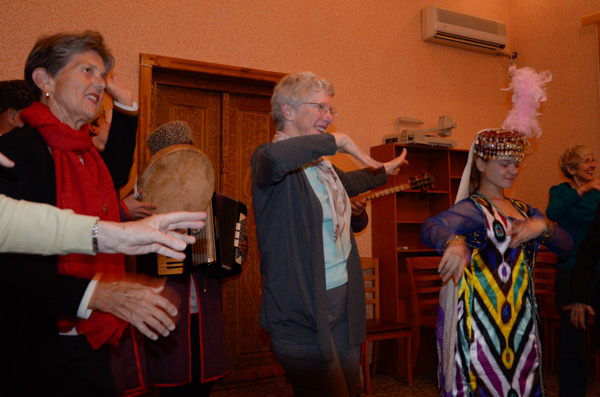 We were sorry to bid goodbye to Uzbekistan, but I believe everyone was looking forward to home.