On the Silk Road in Central Asia
Uzbekistan – Khiva

The drive to Khiva (pronounced HEE-va) is long, but Jama said it had improved greatly in just a few months. Uzbekistan has been replacing the old, two-lane, much-potholed road with a modern four-lane road built to international standards. It's not yet completed, but at least what used to be a nine to eleven hour drive is now only about five to six. There are no suitable air connections to minimize the bus ride.

China has been making major investments in infrastructure throughout the world as part of their Belt and Road initiative. I remember that this particular project was being done with either Chinese or Russian money and/or engineering expertise. If the USA pulls back any more from international engagement, our children will pay the price.

Although our trip was billed as "the five Stans," it actually included six. Karakalpakstan (pronounced kah-ra-kahl-PAK-stan) is an autonomous region within Uzbekistan. We didn't "visit" it in any sense– just passed through. 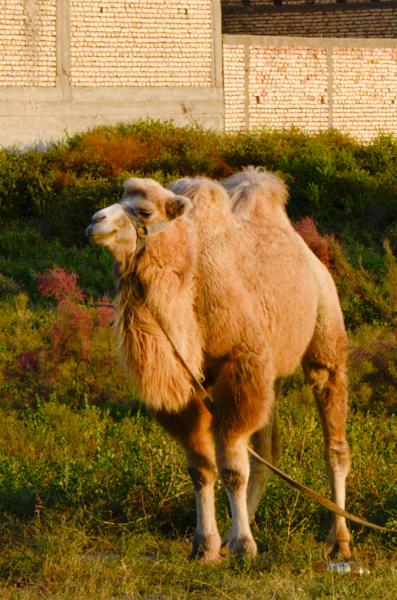 As we left Bukhara, we saw two camels tethered by the roadside. Jama stopped the bus to allow pictures. This was the only Bactrian camel we saw on the entire trip.

Camels are mostly kept for their wool, which is used to make carpets. At one of the carpet shops we received a tutorial on the characteristics of the various camel wools (neck hair from juvenile camels is the finest). 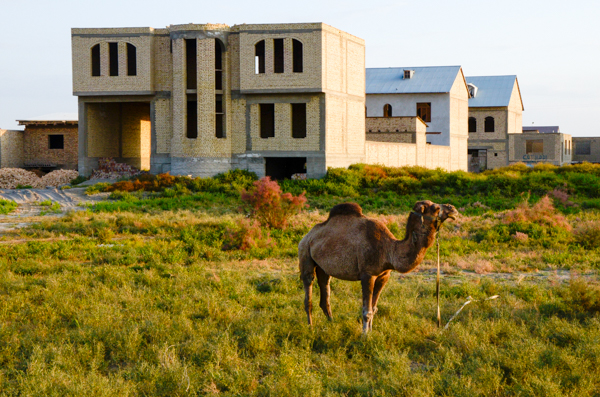 Not far from the Bactrian camel was this Dromedary.

Uzbeks take a long time to build houses. Islam forbids borrowing at interest so each family saves money and builds a bit when they have enough. Many families do a lot of their own construction work, so the process is seasonal – once the growing season is over they will get to work on the new house. 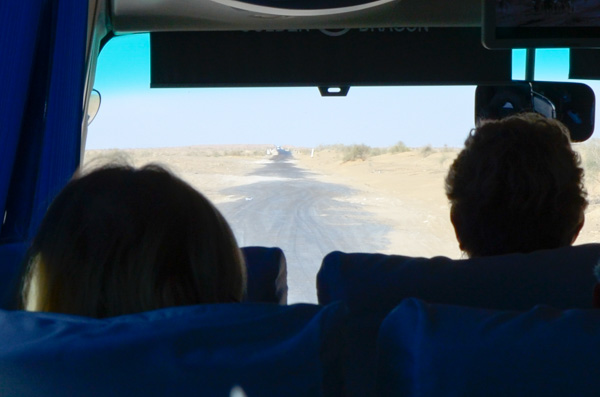 This picture out of the front of the bus shows what the road looks like in spots (and this wasn't one of the worst spots). The pavement is bad enough, but the constant desert wind blows drifts of sand across it making for a very slow and lurching ride.

For the worst part of the ride Jama had a PBS DVD about the remarkable Savitsky Art Collection in Nukus, the capital of Karakalpakstan. A visit to the actual collection was not on our itinerary due to time constraints, but it was eye-opening to see the documentary.

My research since we returned from Central Asia has raised some troubling questions about the fate of this collection and the independence of expression that we were told existed in Uzbekistan. 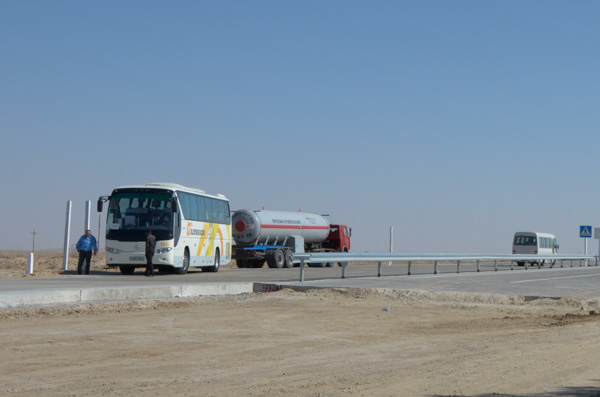 Our lunch stop was at a tea house back of beyond. We had box lunches that were just as over-the-top as the restaurant meals.

Our trusty bus simply stopped on the road while we ate. This is the spot where four lanes go back to two lanes, but at least the roadbed was new and not covered with sand.

Buses are required to have two drivers; one also serves as a mechanic. Both of our drivers were very pleasant. At every opportunity they cleaned the bus, even washing it if water was available. 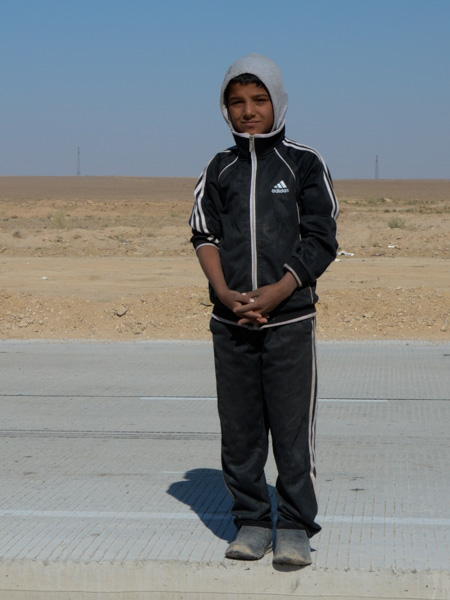 The tea house appeared to be a bus terminal of sorts. This youngster was waiting for the local Greyhound equivalent. He was thrilled to have his picture taken. By the time the public bus showed up there were additional folks waiting, so it must have a specific schedule.

We asked Jama how the people who live here got their children to school. Were there school buses? No, it is up to the parents to figure out how their children can get to the nearest school, wherever it may be. 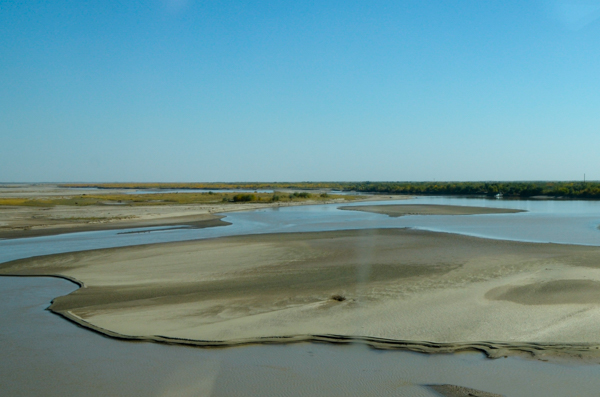 Not long after lunch we crossed the Amu Darya river – one of the major sources of the disappearing Aral sea. The river was once called the Oxus by Europeans. In the spring it carries more water from the snow-melt, but irrigation uses up most of the river's flow during the growing season. 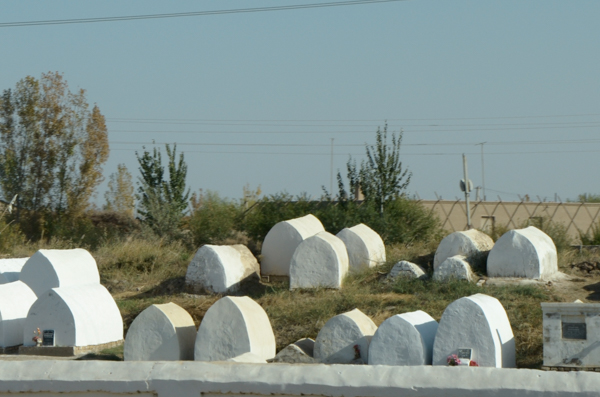 Although we are in the desert, the water table is so high in this area that graves are above ground as in New Orleans. 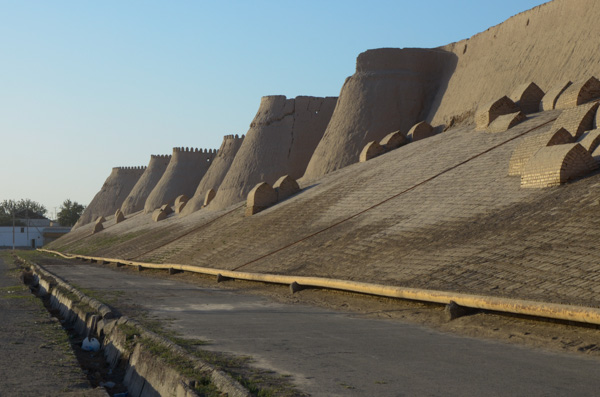 Our hotel in Khiva was opposite the inner wall surrounding the Ichan-Kala or inner town. 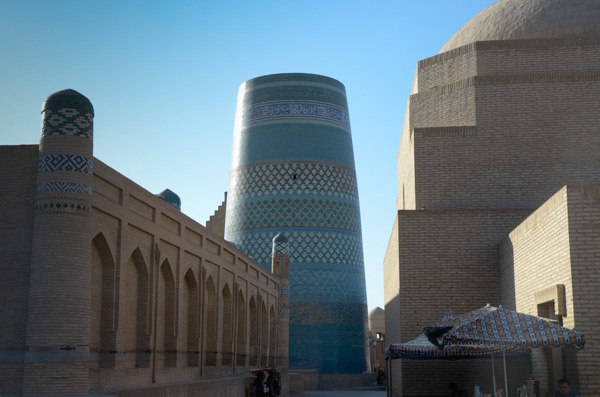 This squat tower is only the lower portion of a 19th century minaret that was never finished. The builder's goal was the tallest minaret in Central Asia. He believed that it would enable him to see all the way to Bukhara (not true). 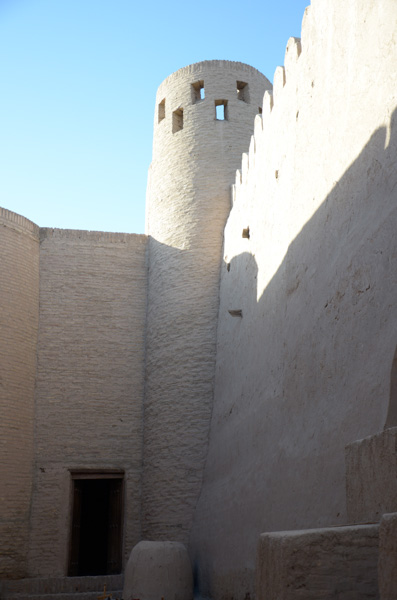 In the same way that there isn't only one "registan," the "ark" in Bukhara isn't the only ark. "Ark" means "fortress" in Persian.

Jama brought us to the Khiva ark for an overview of the city in the late afternoon light. We will enter the door and climb the steep stairs. 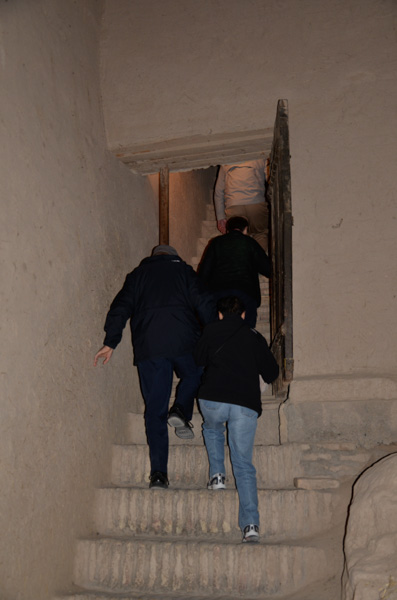 I got UP the stairs fine, but had to come DOWN on my rear to spare my knees. I got some puzzled looks, but it worked for me. This is why hiking pants are dust-colored. 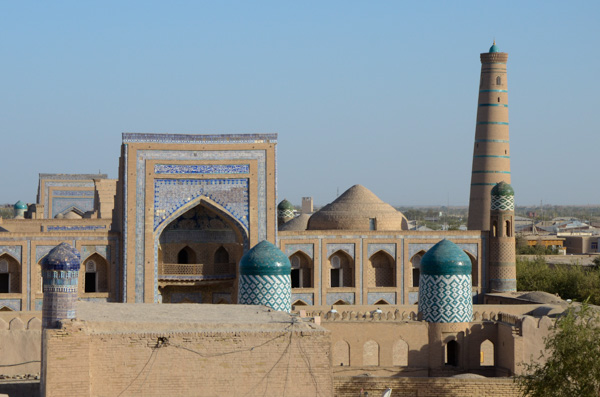 One view of the Khiva skyline. The views changed as we clambered up to the various levels inside the fortress. 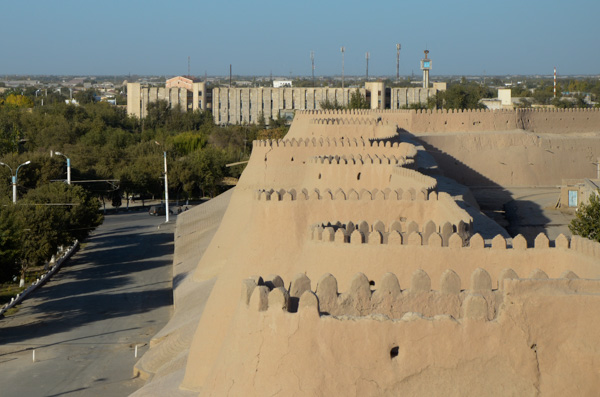 Looking along the old wall toward modern Khiva and beyond to the city of Urgench. 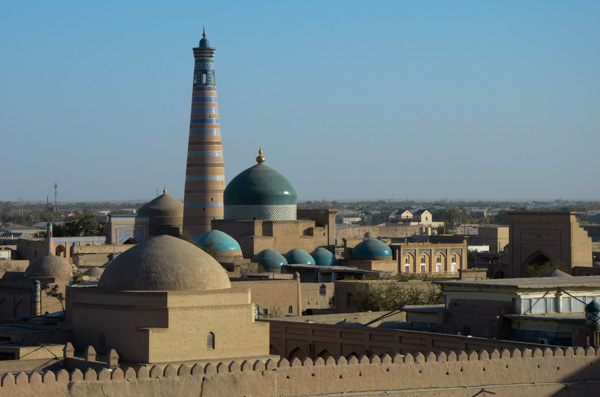 Yet another overlook of old Khiva. 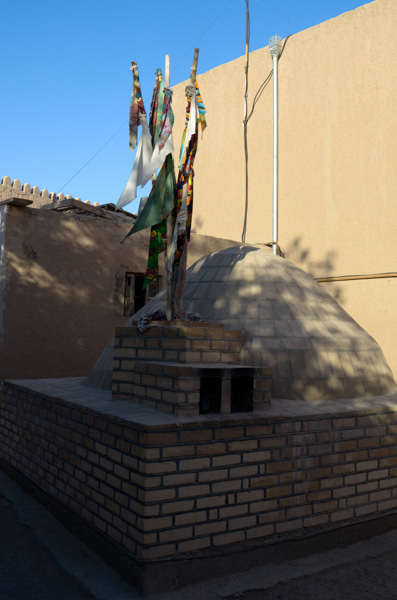 Throughout Khiva we saw these standards with pennants. Jama said they mark the graves of holy men or saints. Some look relatively modern, like this one, whereas others were almost buried under the modern level of the streets.

Tomb-worship, or veneration of saints, is a cultic practice held over from earlier shamanistic beliefs. As a form of idolatry it goes against Islamic beliefs and is condemned by scholarly Muslims.

Nevertheless, as we have seen throughout Central Asia, elaborate mausoleums are prevalent. This seems to be especially true in Khiva. Many graves in the city are located near the graves of holy men hoping some of their virtue will rub off. In order to be buried in Khiva, however, one must die in Khiva since no corpse can be brought into the inner city. 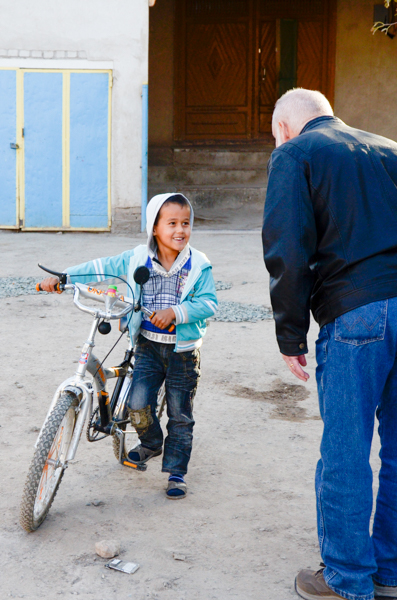 As elsewhere children were friendly and eager to practice their English. Jim always tried to engage them in conversation, but they seldom went beyond the most limited exchanges. 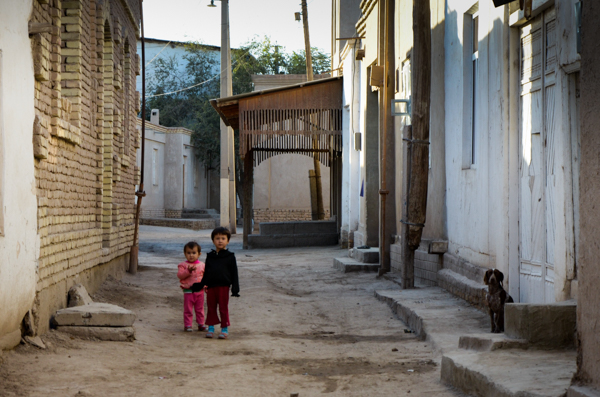 The streets in the old city of Khiva were even more primitive than elsewhere. Part of that is due to its World Heritage status, which prohibits much alteration.

We wondered if the Khiva Architectural Review Board was as nit-picky as the one in Lexington or where we used to live in Reston. Imagine living in Colonial Williamsburg.

We never got a concise definition of the population of this oldest part of town, but it ranged around 2000. 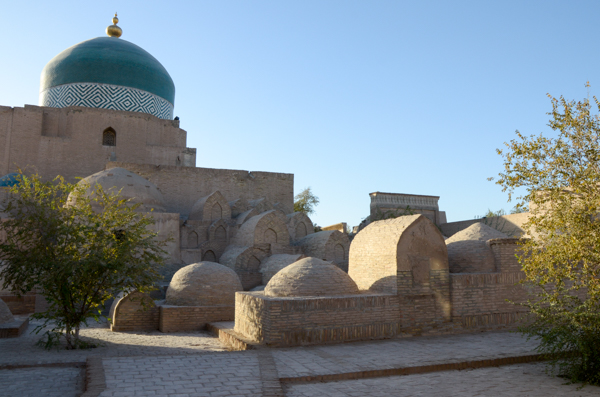 The blue dome belongs to the Pahlavan Mahmud Mausoleum. It is the center of an extensive necropolis. As noted above, people sought to be buried close to a venerable saint.

We will see more of it later.