The next morning we started our walking tour of Bukhara at the Lyabi-Hauz pool just a short walk from the hotel. "Hauz" or "khauz" means "pool." Lyabi-Hauz means "around the pool." 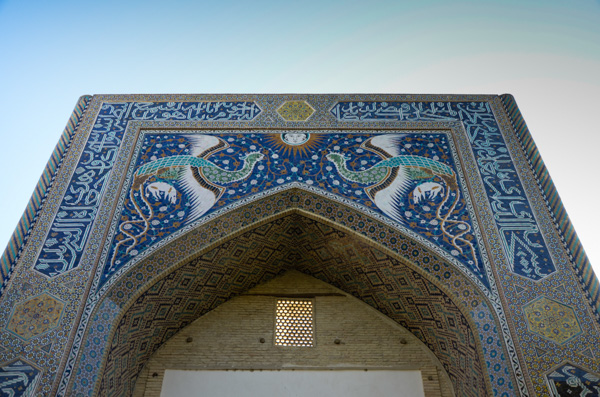 The 17th century Nodir Devon Begi Madrassah, located near the pool, was built as a caravanserai. When it was mistakenly dedicated as a madrassa, the dismayed builder abandoned his original plans! 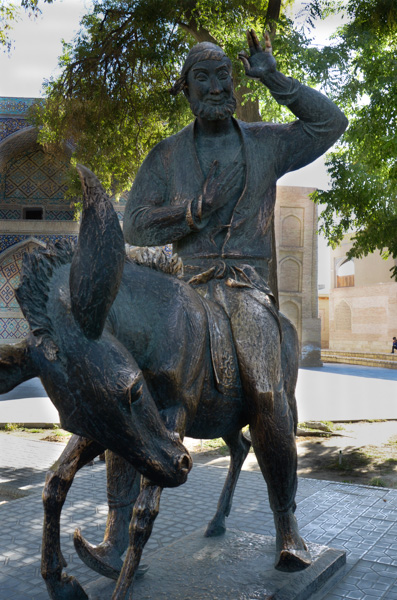 This statue memorializes Mulla Nasrudin (among other names), a folk character who may (or may not) have been based on a real character of long ago. According to legend he roamed the Silk Road dispensing wit and wisdom.

Check the link above for some tales and chuckles. 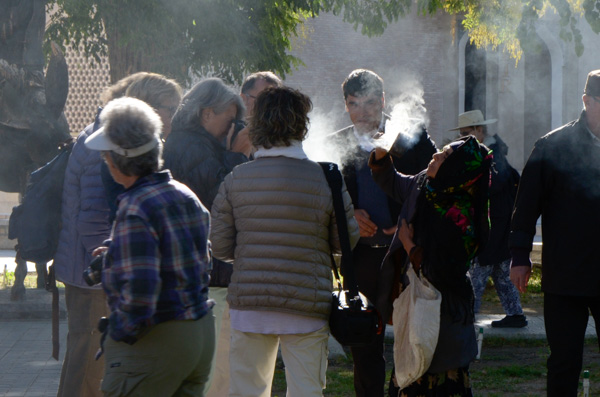 Women wandered through the crowds at the pool and other locations in Bukhara. The censer burns foul smelling herbs, but locals believe the smoke brings protection from the Evil Eye.

Jama said that the specific combination of herbs has in fact been shown to be anti-microbial.

For a fee such women would fumigate your shop. 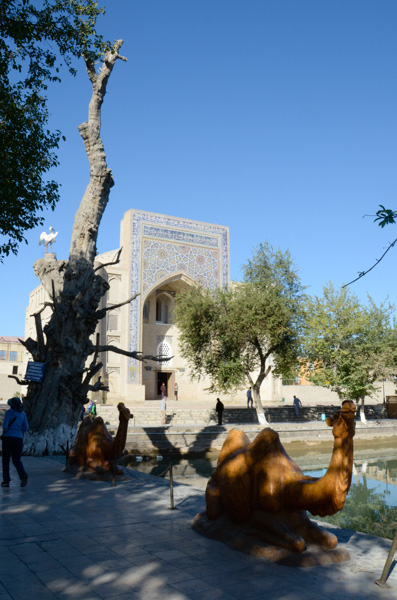 Ancient mulberry trees and sculptures of Bactrian camels surround the Lyabi-Hauz pool. This dead tree had a plaque stating that it was planted in 1477. It is still protected. Younger trees were nearby. (The stork in the tree is a sculpture.)

The building in the background is a khanaka, or gathering place for itinerant Sufis.

The pool is one of a few remaining in the city. There were once many others as water supply for people and animals, but water-borne infections including the particularly nasty guinea-worm disease were common. Under the Soviets most of the pools were filled in and the diseases were eradicated. Guinea-worm disease is now on the verge of being wiped out world-wide.

We will see other remaining pools. 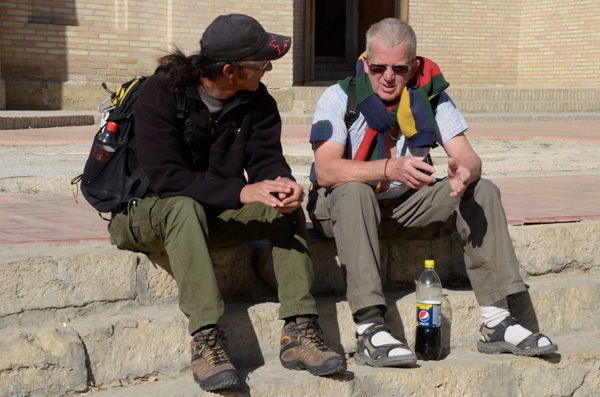 We gathered around Jama (on left) as he told us about the Sufi variant of Islam common in Bukhara. Two men joined us and began asking questions. Later one of them introduced himself. He was a Danish Sufi on a pilgrimage to Sufi holy sites. He wanted very much to travel to Turkmenistan, but Jama disappointed him by explaining how hard it is to enter that country without an official invitation. Road Scholar had arranged such invitations for us as part of obtaining our visas. 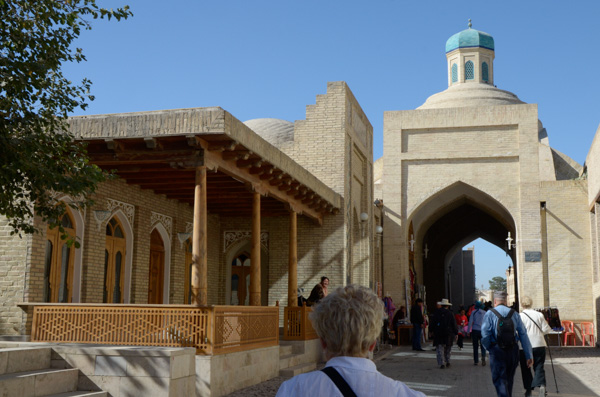 Continuing our walking tour we visited the first of several 16th century "shopping malls" or trading domes scattered throughout the downtown. This one was called Toqi Sarrafon (or Toki Zargaron) and included an adjacent haman or bathhouse.

Each of these domes housed several shops, often grouped around a theme, e.g, carpets or hats. 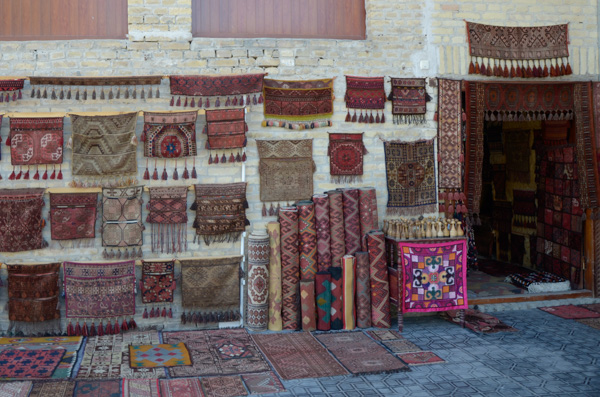 Jama warned us that if we purchased anything we needed appropriate documentation to allow its export or it might be confiscated at the border. Not everything, e.g., antiques, can be exported.

As for ourselves we're at the point in life where we want to get rid of stuff rather than get more stuff. 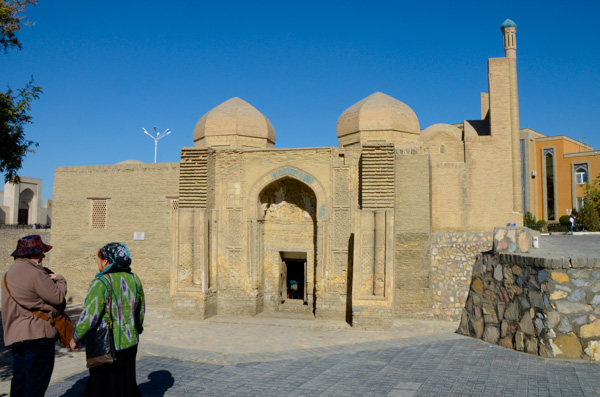 The Magoki-Attori mosque is many feet below the current street surface and indicates the 12th century level of the city. The link has the history of the site, which has been used at various times by the Buddhists, Zoroastrians, Jews and Muslims. 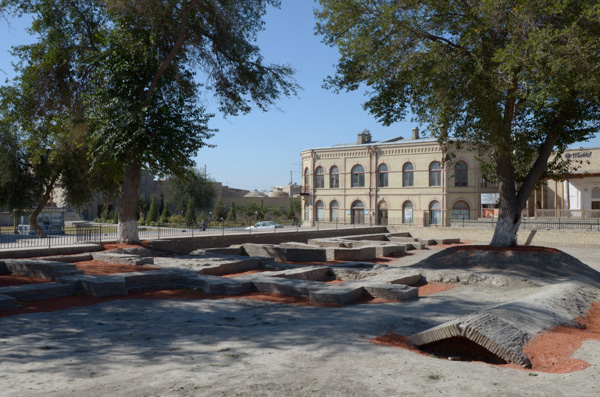 Adjacent to the mosque is an ancient bath complex believed to be 1000 years old. There were separate sections identified for Jews and Christians as well as Muslims. The site is only partially excavated.

Don't be dismayed at the Cyrillic text at the link; an English-language article follows. 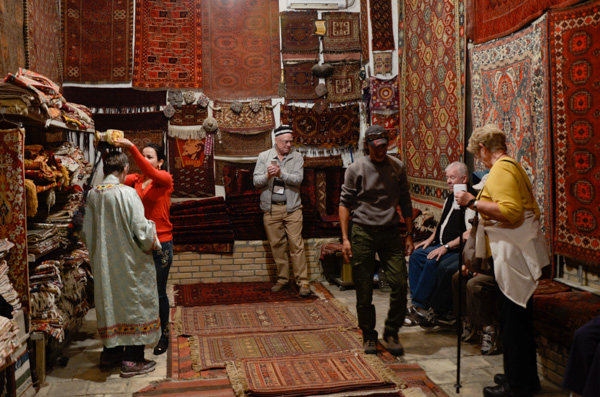 The workers at a carpet shop decked Jim and Kathy Massie in traditional wedding regalia.

Kathy, on the left, is beginning to get dressed. Jim hasn't started yet. Typical guy!

Some of our number returned to this shop later to purchase carpets – with appropriate paperwork, of course. Jama checked. 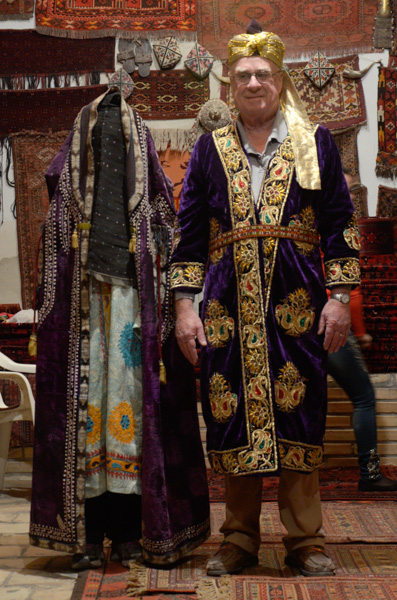 After the final robing is done, the happy couple are ready to renew their vows. The bride complained vociferously about the weight and stuffiness of her garb. 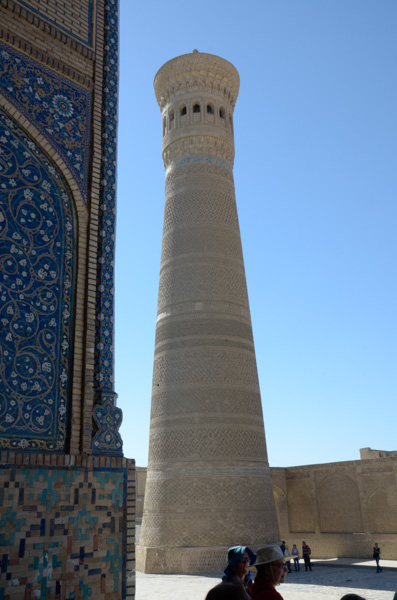 Although much of what we saw claimed to be from this or that century, almost all of it has been reconstructed. The Kalyan Minaret is original. It dates from the 12th century and has survived earthquakes and the conquering armies of the Mongols and the Russians, among others.

The lighting was all wrong for me to get a decent picture, and I wasn't sure I could find my way back later in the visit. Check the link above to see the beautiful details.

In the 18th and 19th century the minaret was used for executions. Convicted criminals were thrown down from the top. Yuk! As if there is a humane way to execute people. 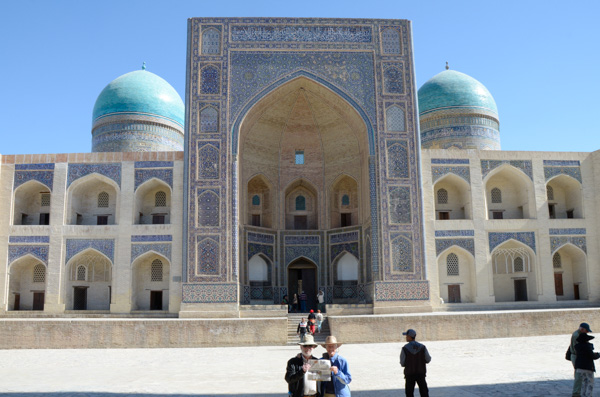 The Mir-i-Arab madrassa stands opposite the Kalyan mosque.

Our local newspaper, the Lexington News-Gazette asks subscribers to take a copy with them on vacation. They will then publish pictures. Jim and I are standing in front of the madrassa holding something. Trust me, it's the paper. 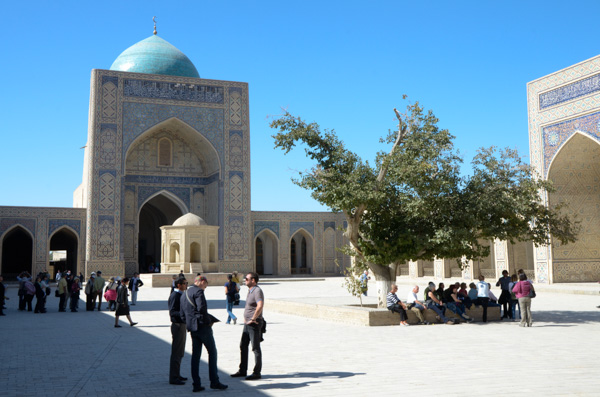 This mosque is almost as large as the Bibi Khanym mosque that we visited in Samarkand, but it is still used as a place of worship.

The "sanctuary" is under the large domed structure. 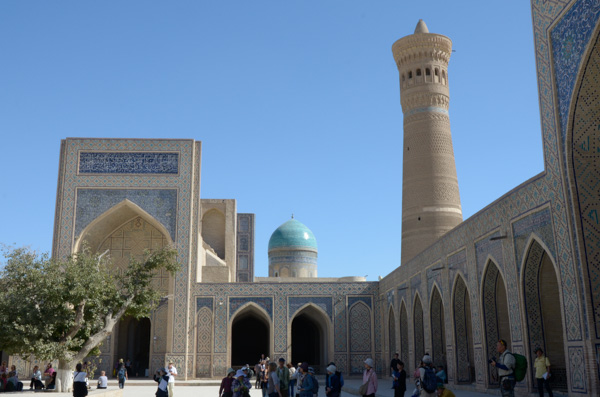 The main entrance gate of the mosque. 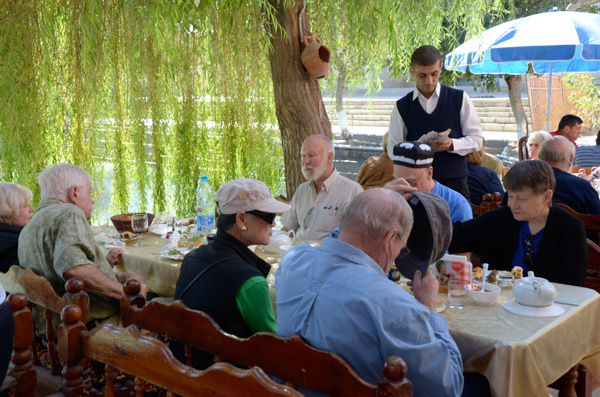 After visiting the mosque we headed back to the Lyabi-Hauz plaza for lunch overlooking the pool.

This was not our favorite eatery either for the food or the service, but the ambiance was great ... until they turned on the fountains right beside our tables. There was just enough of a breeze to make it a trifle damp! 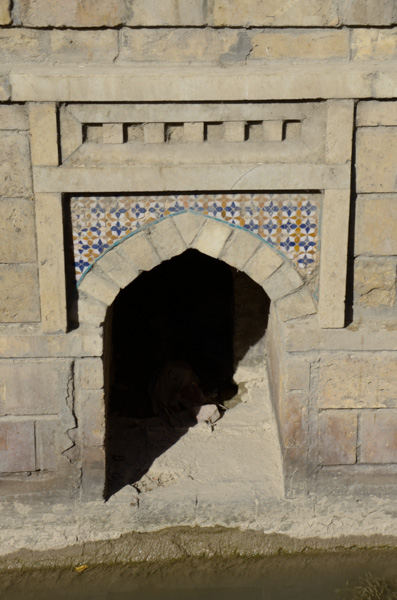 A canal running along the adjacent street provides water for the pool. 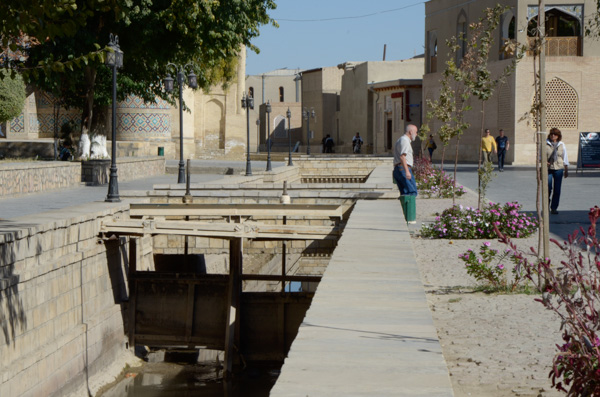 The weir raises or lowers the water level in the canal as needed. Sluices then allow water into (or out of) the pool.