On the Silk Road in Central Asia
Turkmenistan

I didn't like Turkmenistan. I am appalled at waste: waste of money, waste of human resources, waste of material resources. Turkmenistan, as far as I could tell, epitomized all of these wastes and it gave me the creeps. This was in spite of our local guide who did his best to display everything that we saw in its most positive light.

Getting into Turkmenistan wasn't as difficult as expected, just tedious. It was only a short bus ride from Khiva. There were the usual border formalities including one diligent officer who scrolled through every picture on my digital camera. Since there were over 1000 it took a while. The border was officially "closed" so there was no shuttle across the no-mans-land. We dragged our suitcases along the crumbling road for over a mile. Jim timed it. Two hours getting 24 elderly tourists across.

At the other side of the border we met our local guide and a bus. That afternoon was spent in Tashauz. That evening we got on a Boeing 717 for the flight to Ashkhabad. I had never heard of this aircraft, but it is basically a DC-9. As luck would have it I was in the last row right next to the engine! The engines were quieter than I remember the DC-9 engines so I wasn't quite deafened.

The local guide was another one who was nostalgic for the Soviet Union. Prior to "independence" they had a social safety net. Medical care. Jobs. Pensions. Afterwards nothing like that. The only thing unchanged was the strongman "leader."

Turkmenistan has the smallest population of any of the countries we visited. There is considerable oil & gas wealth, but little of it benefits the population as a whole.

One of our favorite stories, however, happened here. The florescent light in the hotel bathroom didn't work. The tube was burned out. When we first arrived, Jim called the front desk to report it and they said it would be fixed by the end of the day. It wasn't. When we called again, they said they would send someone right up. The workman immediately started disassembling the switch outside the bathroom. Jim pointed out that it was more likely to be a bad bulb. Huh? He nodded, ran and got a new bulb. Voila. 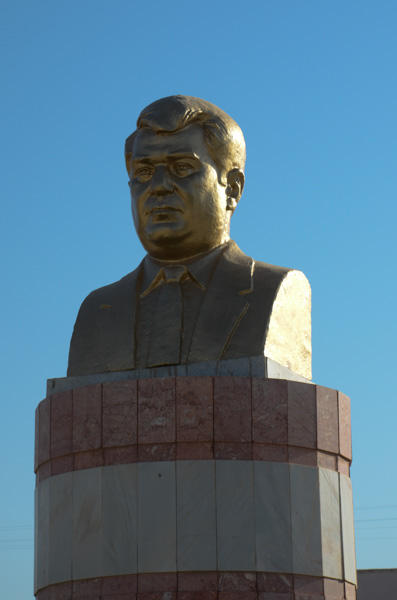 Turkmenbashi (the great) was the local Communist Party boss when the Soviet Union disintegrated. Before his death he used his position as "president for life" to start remaking Turkmenistan into, not a model country for its citizens, but a showplace for his own self-aggrandizing ego.

I will have more to say about this individual.

Since his death he has been replaced by current president Gurbanguly Berdimuhamedov, who has rolled back some of the silliest moves by his predecessor, such as renaming the months after himself and family members, but continues his oppressive regime and other expensive bad ideas. 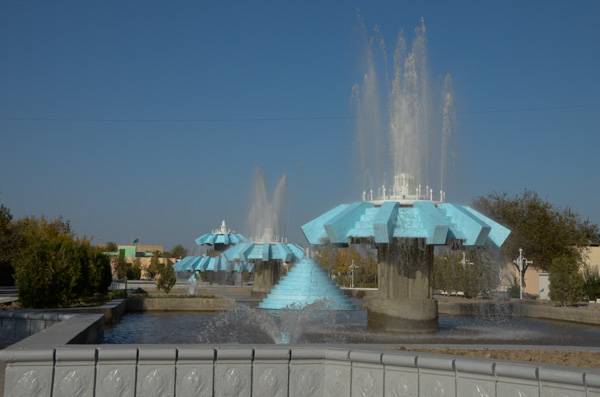 As we waited for our dinner, we were free to wander in this Tashauz park. In the desert, fountains such as these are are not just ugly, but also an incredible waste of precious water – even more than the open pools and canals that we saw elsewhere. 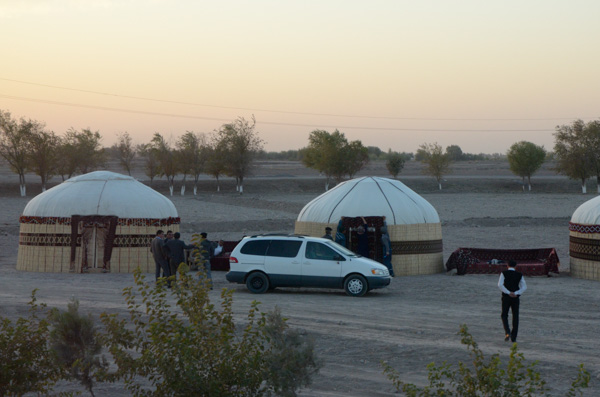 After dinner we departed for the airport. On the way we passed this collection of party yurts. Our guide said these can be rented and used for weddings, family reunions, office parties, etc.

It looks like something was being planned for the weekend (we were here on a Friday) because traditional decorations were being put up.

The excursion I had been waiting for came the next morning: a visit to a horse farm! The farm buildings are the low white ones.

One of Turkmanbashi's more questionable ideas is planting trees throughout the desert. The "stripes" on the hill to the left of the photo is a tree plantation created at great cost. It is unlikely that many of these will survive. 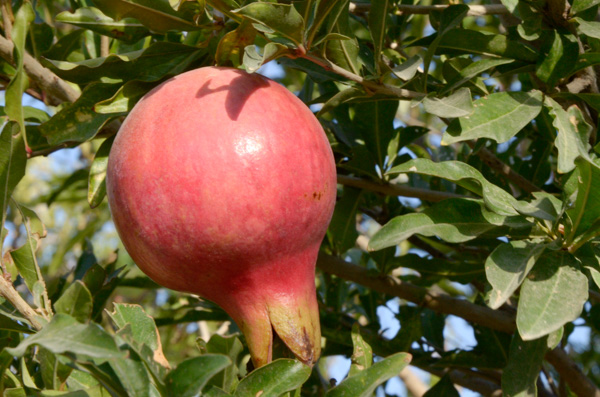 One tree is thriving at this farm. With irrigation. We saw pomegranate products throughout our trip, including yummy pomegranate juice for breakfast. I've not yet found an equivalent since coming home -- POM doesn't compare -- so it's back to V-8. 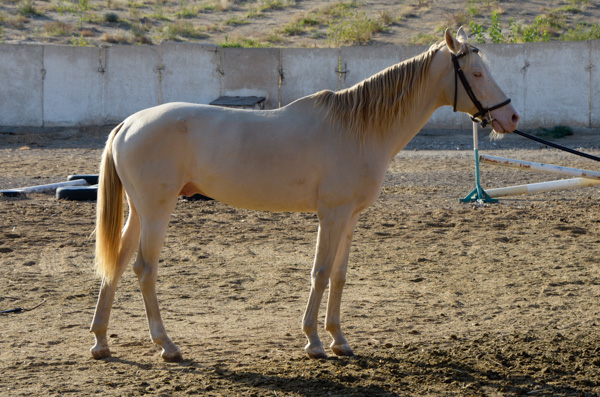 The horses we saw at the farm were all Akhal-Tekes, the native horse of this region. Teke or Tekke is one of the major Turkmen tribes.

This handsome stallion appears to be a perlino with pink skin and blue eyes. Perlinos and cremellos have a double-dose of the cream gene that produces palominos and buckskins when only one copy of the gene is present. More on this color characteristic can be found at the link. I was mildly disappointed that none of the animals we saw had the metallic sheen that the breed is noted for. 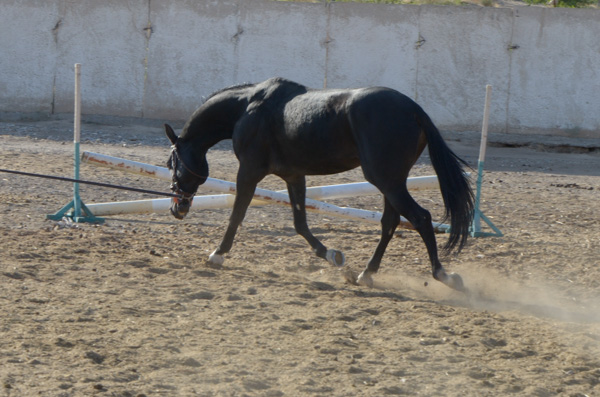 This black or dark brown stallion was the best individual that we were shown. He is young and was full of beans. What a stride he shows!

I had read that the Akhal-Tekes had difficult temperaments, but all of the horses that were introduced to us were very well-mannered and mellow. Even this youngster (once he got the ya-yas out) seemed pleasant. 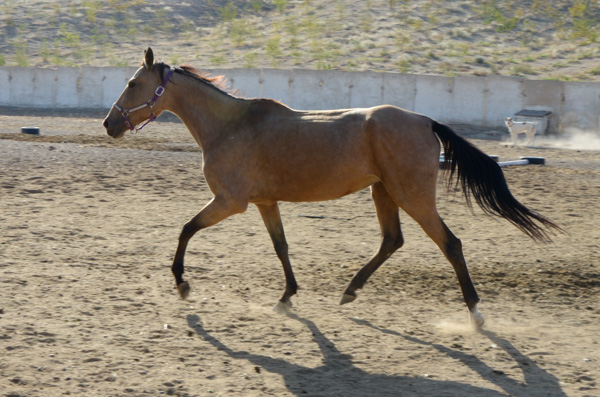 A buckskin like this mare is produced by breeding a carrier of the cream gene mentioned above to a bay. Having a double-dilute or homozygous horse like the stallion above guarantees flashy-colored offspring. 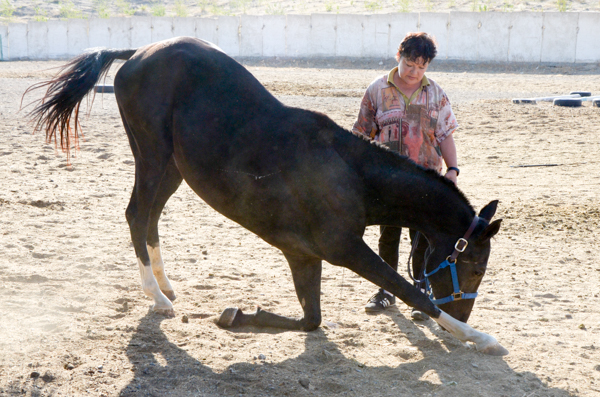 The last presentation horse gave us a gracious salute.

The trainer didn't speak English, but after the presentation I was able to let her know that I had Arabian horses. She took me back into the stable to show me a couple of half-Arabs. One was a cross with a Yomut horse. He was a grey – cute and small just as I like them. The other was a drop-dead gorgeous Thoroughbred-Arabian (Anglo-Arab) stallion. He was a big guy, but very sweet and friendly.

"Horse" is spoken the world over. 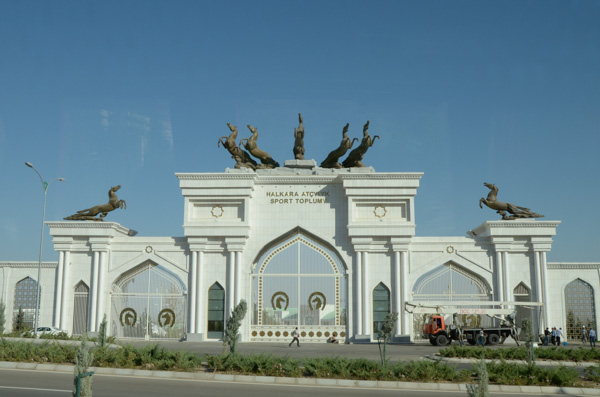 After leaving the farm we passed this state-of-the-art racecourse built by the late Turkmanbashi.

Turkmen take their horses seriously. We were told it is even harder to export a horse than a carpet. That said, there are breeders here in Virginia. One is in nearby Staunton (link opens in new tab).

The current president is a horse fanatic. But his ego is such that when his mount fell after winning a race not long before our visit, the state did its best to hush it up. The president was not injured. It didn't appear that the horse was either.

The white line wending its way up the mountain was Turkmanbashi's exercise trail. His doctors told him he needed more exercise, so he had this trail constructed at great expense. He never used it himself, but he did require all government workers to climb it annually.

Similarly his doctors told him he needed to stop smoking. Therefore he banned smoking in public places throughout the country – even outside. This ban still obtains. The only place you can smoke is in the comfort of your home or hotel room. I don't remember if he himself ever quit smoking.

The other side of these mountains is Iran. 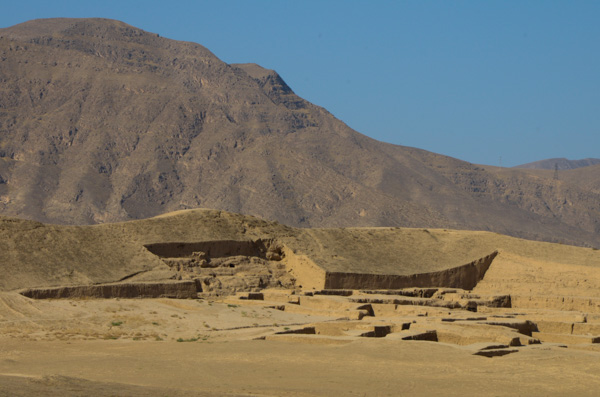 Our next stop was the Nisa archeological site. Nisa was the capital of the Parthian empire from the mid 3rd century BC to the 3rd century AD.

Read about the discovery and initial excavation of the site at HeritageInstitute.com. There is also a nifty aerial view.

As we entered the archeological site, our bus driver stopped to pick up a pal. This gentleman took a fancy to one of the single ladies in our group. He became very friendly. He proposed! We THINK he was joking, but she didn't get very far from the main group for the time of our visit there and I don't blame her.

Nisa was constructed of mud brick, which doesn't withstand the elements. The site was preserved by being buried under layers of sand. Now that it has been excavated in part, workers are covering the ancient mud brick with a "sacrifice" mud layer to protect it.

Well-preserved details like this are excavated, documented and reburied. 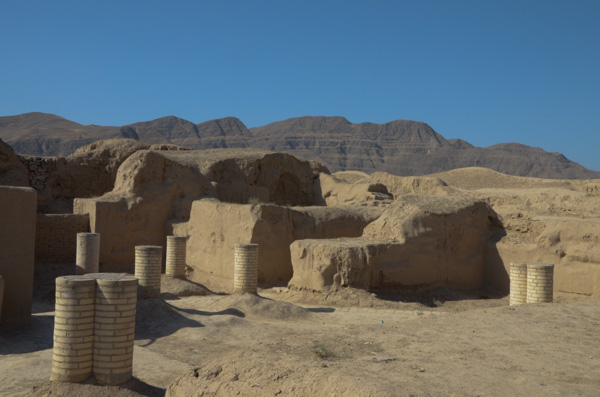 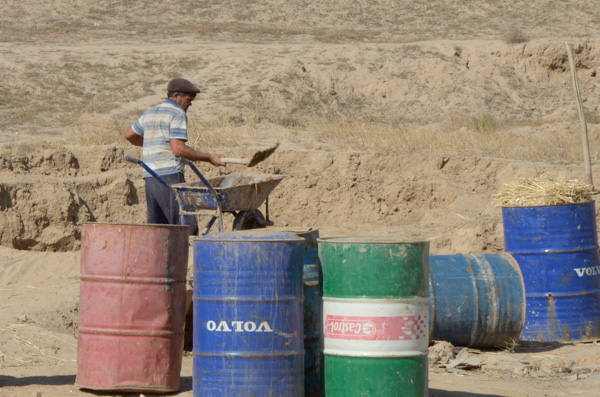 Work was ongoing while we were visiting. It appeared to be directed toward preservation rather than excavation. 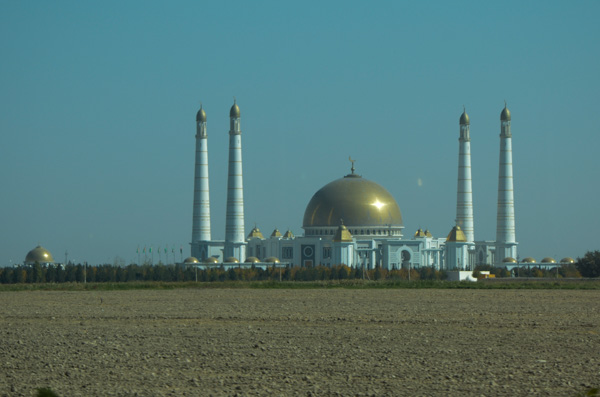 After the visit to the site of Nisa we drove to the village of Gypjak where Turkmenbashi is buried in a mausoleum adjacent to this mosque. The mausoleum is the small dome to the left.

The haze is partially smog and partially dust blowing in from the desert. 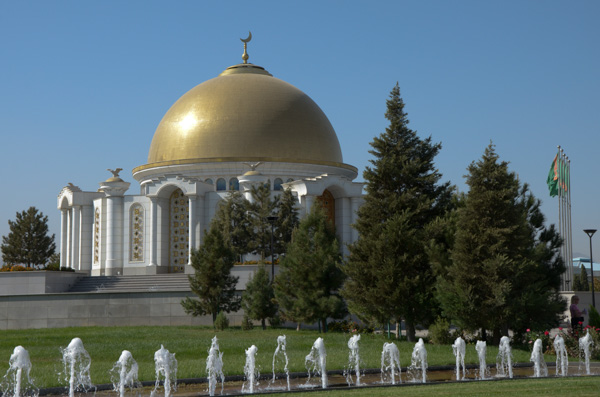 I didn't visit the mausoleum. There were restrictions on how you could move around the tomb and Army guards to make sure you followed them, whatever they were. At least a couple of our group were warned when they stepped over some invisible line.

Inscriptions inside the mosque were both from the Quran and Turkmenbashi's own pseudo-spiritual guide, the Ruhnama. It is more-or-less the equivalent of Mao's little red book. The write-up at the link made me very sad. The up-side is that Turkmenbashi's successor no longer requires schools to teach the book or university admissions tests to include it. 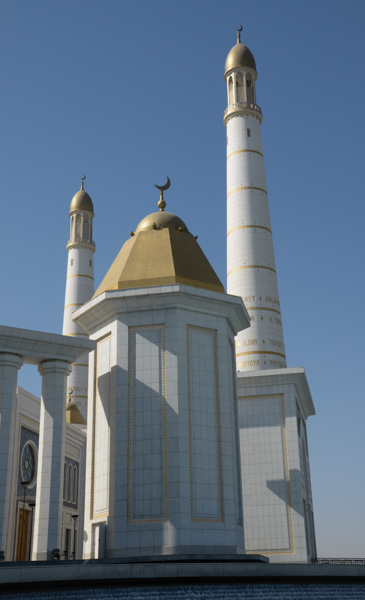 Two of the minarets of the mosque. I'm pretty sure the inscriptions on them are from the Ruhnama rather than the Quran. 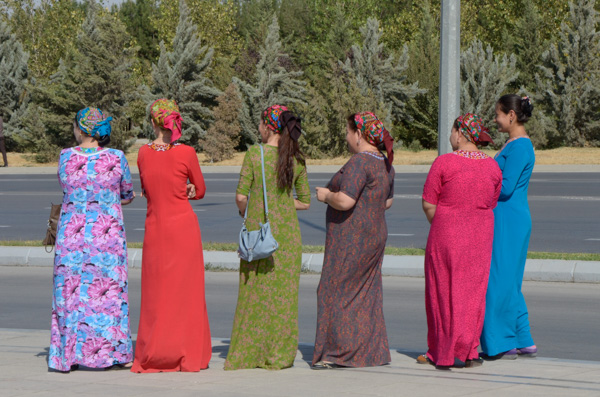 This group of ladies waiting for the bus was a happier sight than either the tomb or mosque.

Unlike other countries where women opted for either traditional or western dress, the overwhelming majority of Turkmen women wore traditional long dresses – at least in public. 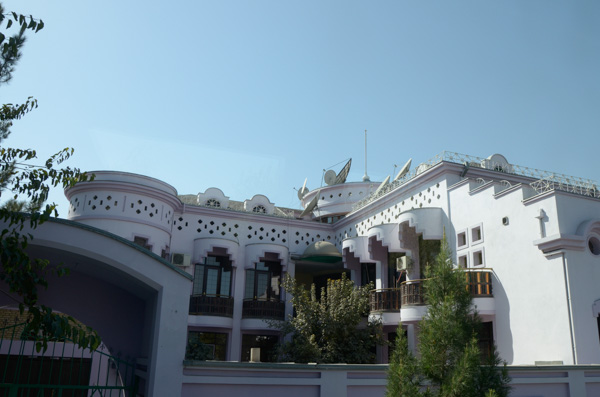 We returned to the city for lunch at a restaurant in this building. One of Turkmenbashi's not-so-bright ideas was to turn Ashkhabad into a white marble city. He and his successors have imported marble at great expense from Carrera, Italy, to face existing buildings as well as all new ones.

In the afternoon we visited the National Museum of History and Ethnography to see some of the artifacts found at Nisa. 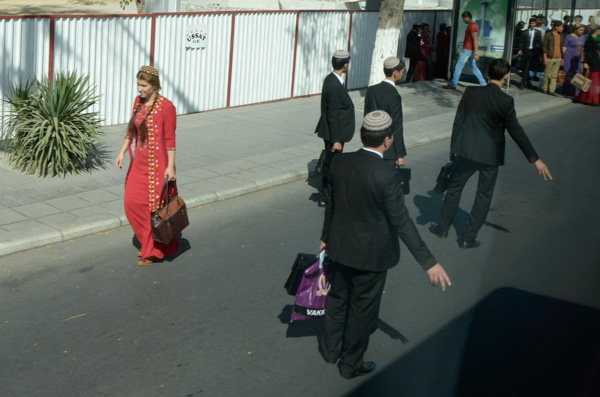 Turkmen students wear uniforms. The boys wear western dress, but the girls wear traditional dresses with their hair braided into long pigtails. The dresses are either red or bright green. Period.

The boys seem to be hailing cabs.

This Monument to Independence is as over-the-top as anything else in Ashgabat. The promenade to the fountain is guarded by black and gold statues looking for all the world like the Winkie Guards in the Wizard of Oz.

The cape on the Turkmenbashi statue is a nice touch.

The structure in the back is aptly derided as "the toilet plunger." 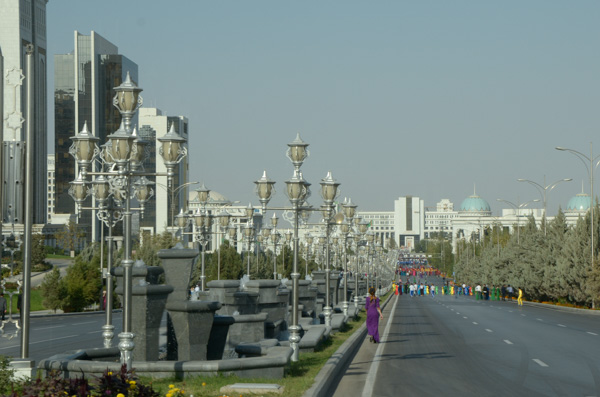 As we were returning to our hotel we discovered that the main street was closed so that marching bands, student groups, etc., could practice their formations for an upcoming Independence Day parade.

Traffic was totally disrupted. Our bus lurched down back streets in desperate need of repaving (but no, instead they're importing Italian marble). 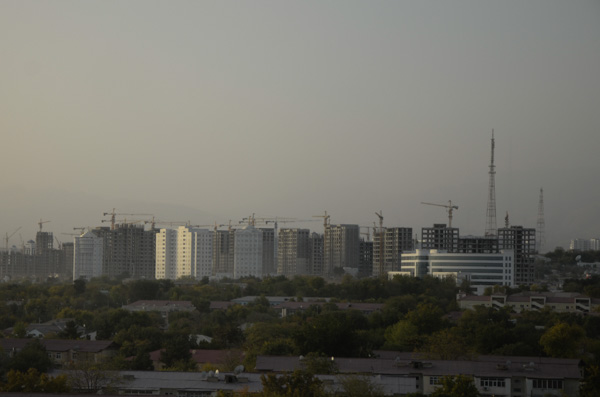 Back at the hotel I took this picture from our window. Older low-rise neighborhoods like the one in the foreground are being demolished to build high-rise apartments. Faced with marble, of course. There is no one to live in them. Most of the buildings that we saw during our stay here were at least partially, if not completely, empty.

We were told that displaced residents would be resettled in new apartments, but we weren't told how much that would cost them or if they would be relocated from the center city, close to jobs, to the 'burbs.