On the Silk Road in Central Asia
Tajikistan

We spent one night in Uzbekistan on our way between Kyrgyzstan and Tajikistan. There were two things that I remember about that night. One was the hotel. Although it was commodious with a beautiful garden and (no surprise) delicious food, we had to make our own beds! When we reached our assigned room, we found sheets, blankets, and towels neatly folded on the bed. Not a problem; we know how to make beds. Some of our company were not amused.

The other memory was the manadatory session with Jama on filling out currency declaration and immigration forms. Not all the desired answers were, shall we say, in accordance with the facts as we knew them! Jama also admonished us in no uncertain terms to keep the hotel certification slip with our passports. We needed to prove that we stayed in an actual hotel rather than a black market flop house. The next morning as we boarded our bus he made us get out our slips and he checked every one.

Speaking of currency, US Dollars were not only accepted almost everywhere, they were preferred. The only country where we bothered to exchange currency was Uzbekistan and that was only because we were there over a week. Jama handed the exchange himself. Almost nowhere took credit cards, and if I saw an ATM I don't recall it. If you travel to Central Asia take cash, preferably small bills in good condition.

The next morning, Jama was not allowed to cross the border with us because it was "closed." He took a taxi to the nearest "open" crossing and met us in Khujand. He also hired a taxi for one couple's luggage. They brought much too much! They were both frail and we needed to haul our bags for about a half mile over a rough road at the border. They loaded their bags into the cab and saw them next in Tashkent!

The crossing took our group of 24 two hours. (Jim started to time the crossings at this point and two hours was typical.) At this particular one we were called for examination individually. I was one of the early crossers and Jim was one of the last. The guards did not allow me to wait so I set out alone across no-man's-land. I didn't think he would be stranded, but was I glad to see him trudging down the rocky path after clearing customs!

After the collapse of the Soviet Union in 1991, Tajikistan fell into civil war. It wasn't until 1997 that the UN brokered a peace agreement and the economy has never recovered. A large percentage of the population is Uzbek and ethnic tensions simmer below the surface, especially in the Fergana valley (the link takes you to a two-part article that echoes what we were told about the region; it's worth migrating past the adverts; don't bother about part 2, which requires a "free" sign-up to another ezine and which generates daily messages about their wares).

We didn't have a single large bus in Tajikistan, but split into a small bus and a mini-van with a second mini-van for our luggage. Jim & I were in the mini-van. The first day we had a charming young woman as our local guide (alas, I don't have any pictures) named something like Hilola. She had a poignant history. Her husband, like many young Tajiks, had gone to Russia to seek work. While there he decided to divorce her and marry a Russian woman. (Given the recent rise in Russian xenophobia directed toward migrant workers from Central Asia and other former Soviet republics, he may regret his decision.) She has a small daughter and although her ex continues to send money, she has no prospect of remarrying in the traditional Tajik society. 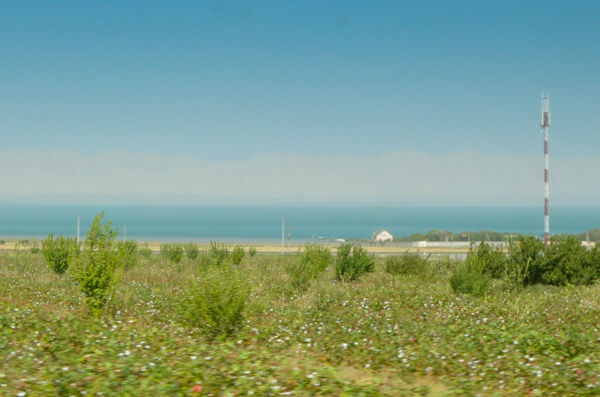 As we traveled to Khujand we drove along this large reservoir, the Kayrakkum or Tajik Sea. It was created by the Soviets in the 1950s for hydroelectric power and irrigation. The water is supplied by the Syr Darya river. 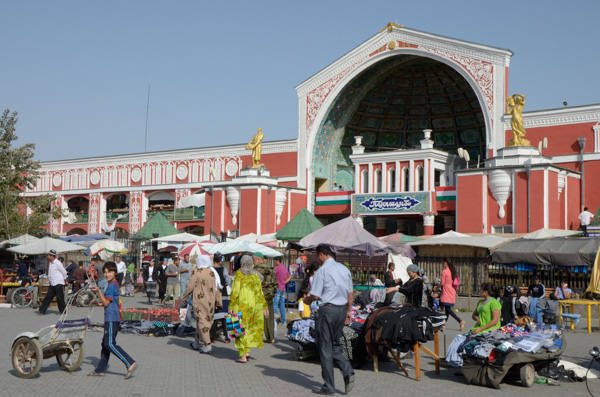 Our first stop in Khujand was the vibrant Panjshabe Bazaar. This huge market had every kind of thing for sale. The name comes from the Persian for "Thursday" because at one time the market was only open on Thursdays. (The Tajik language and people are closely related to the Persians.)

Jim had forgotten to pack his jacket, and since the weather was expected to turn colder, Jama took him on a shopping expedition. He found a nice black leather jacket for $30! 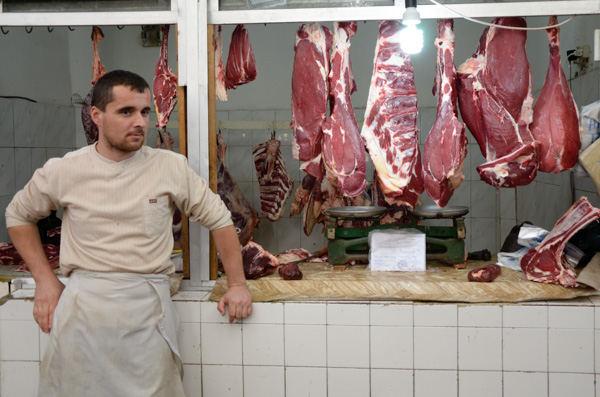 There were several stalls selling fresh meat. I expected flies and foul odors, but the stands were spotless and unobjectionable. 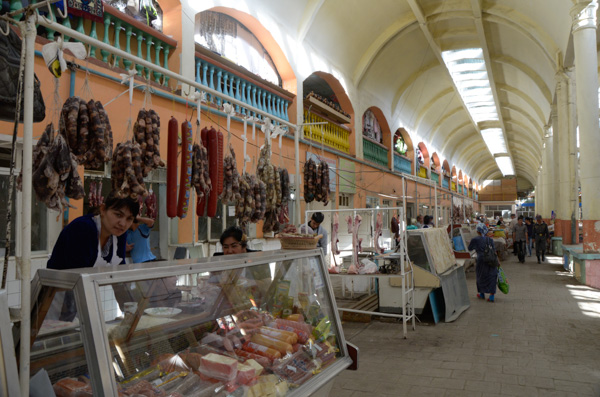 The interior of the bazaar was light and airy as well as colorful. Food stores were downstairs. Goods such as clothes, fabrics, shoes, etc., occupied the upstairs. We never got that far due to lack of time. 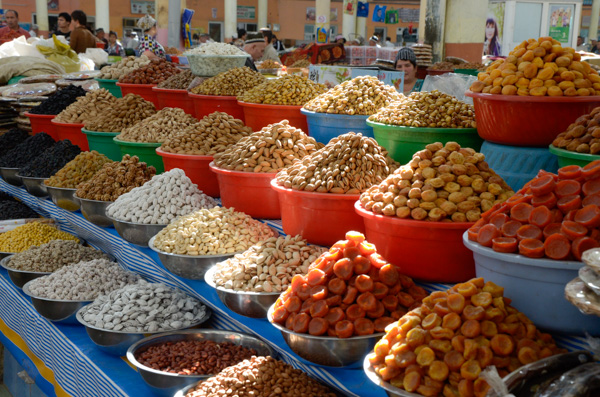 Many stalls offered fruits and nuts. While on this trip I became reacquainted with apricots, which are widely available both dried and in preserves. I made a resolution to use more apricots now that I'm home. Delicious! 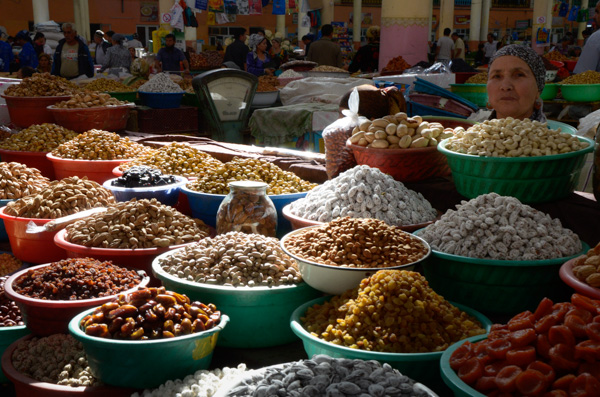 Golden raisins shine in the sunlight along with other goodies. The white piles are candied almonds. 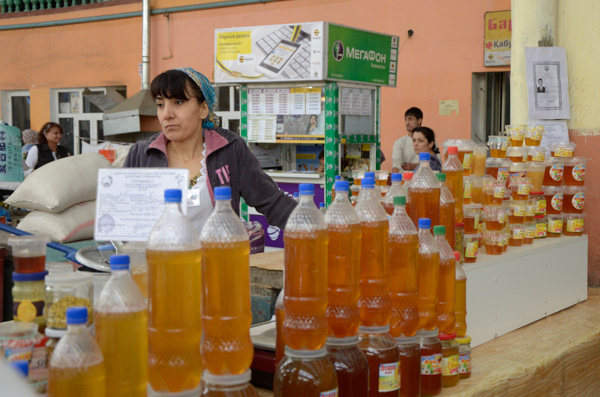 The number of varieties of honey was mind-boggling.

Our tour was so jam-packed with sights that it's hard to keep them all straight. There were a great number of what Jama called the 3Ms: mosque, medrasa & mausoleum. Several people kept detailed notes every day. I wish I had. Two more Ms might be minaret and monument.

Across the plaza from the bazaar is a 3M complex. My memory of the exact layout of the buildings is foggy, but I believe the building on the left with two domes is the mausoleum of Sheikh Muslihiddin Khudjandi, a poet and ruler of Khujand who lived in the 12th century. The similar building on the right is new and under construction. 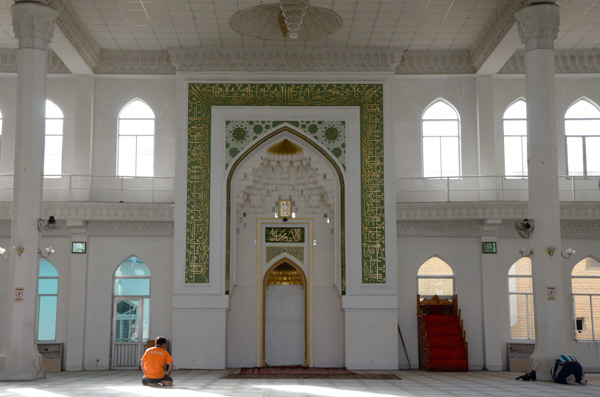 The interior of the mosque associated with the mausoleum above. As I recall the mosque was located to the left and out of the picture above.

Although all of the republics we visited were Muslim states in the past, the Soviets repressed all religions. Mosques and churches were either destroyed, turned into museums, or otherwise diverted to secular use.

Since independence religious expression has increased, but most people we met observed only the major festivals – similar to "Christmas & Easter Christians."

Religious fervor is more evident in the Fergana valley than elsewhere. 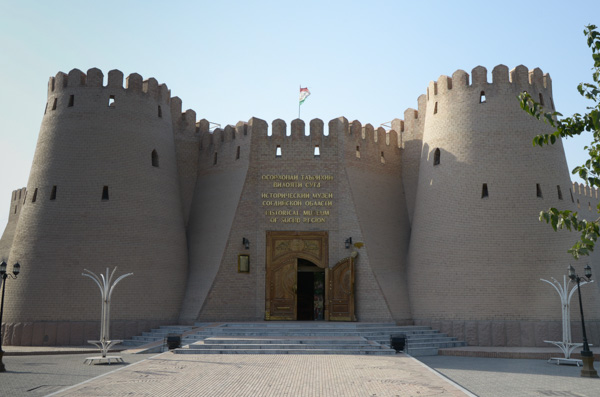 The Khujand fortress has been reconstructed and turned into the Historical Museum. The original fortifications have been destroyed and rebuilt many times over the cnturies. We didn't get to see anything of the fortress itself. 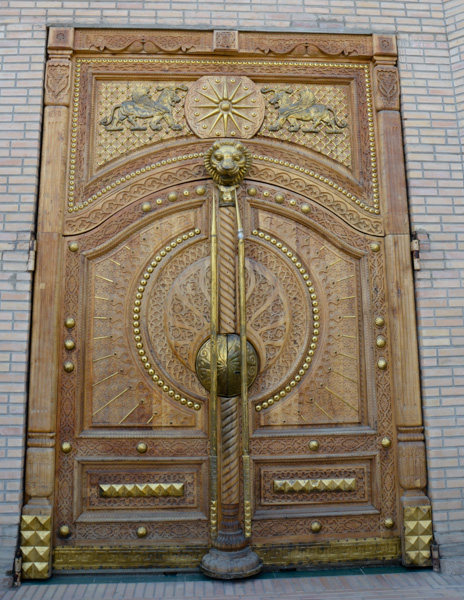 Throughout our travels we saw magnificently carved doors, but this door into the museum was the most elaborate.

Although Islam prohibits any depiction of animals or people, this prohibition is often evaded by the representation of mythical or imaginary creatures like the winged lions on the upper part of this door. We will see many similar devices on our travels.

I've read that the ban against such representations was intended to discourage idolatry rather than to be a blanket prohibition. Fundamentalists of all sects, however, often fail to look beyond the surface. 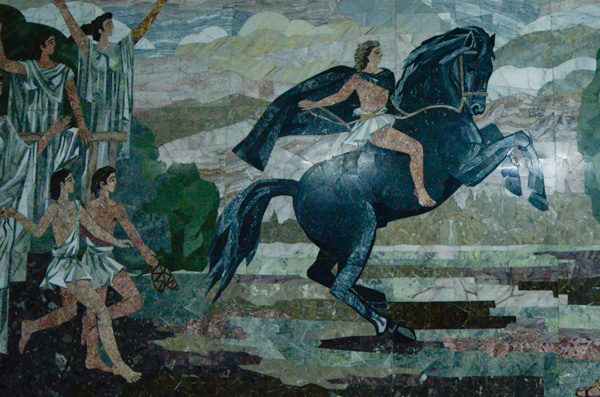 Murals inside the museum depicted the history of Khojand, which traditionally was founded by Alexander the Great. One of the murals showed the taming of Bucephalus, one of the most-storied horses in history.

The murals were mosaics created, as I recall, from stone found within the country. 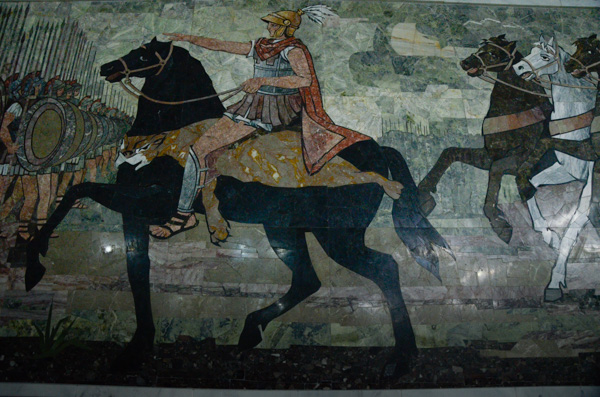 Alexander married a Central Asian woman from Bactria named Roxana. She bore him a posthumous son, Alexander IV. Shortly after Alexander's death, she murdered Alexander's other wife (or wives) to prevent any possible question of the succession. Later she and her son were themselves murdered.

Alexander's empire did not survive long after his death. 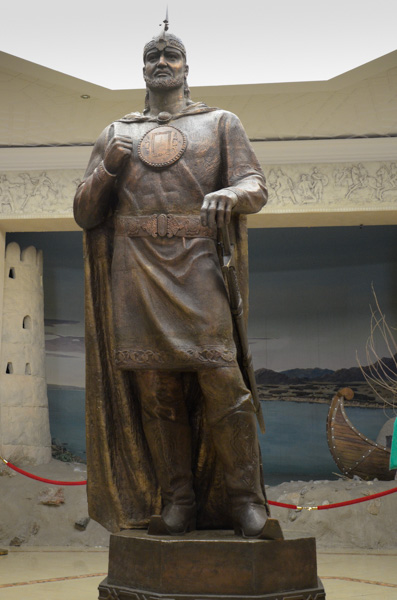 Timur-malik is the major hero of Tajikistan. He and his army were besieged at Khujand by the Mongol armies of Genghis Khan. After a valiant defense and a desperate attempt to break the siege, Timur-malik was the only survivor.

The Mongols destroyed the city. This was their practice for all cities that resisted. Those that surrendered without a struggle were allowed to remain and retain their own government – as long as they paid taxes to the Mongol overlords. 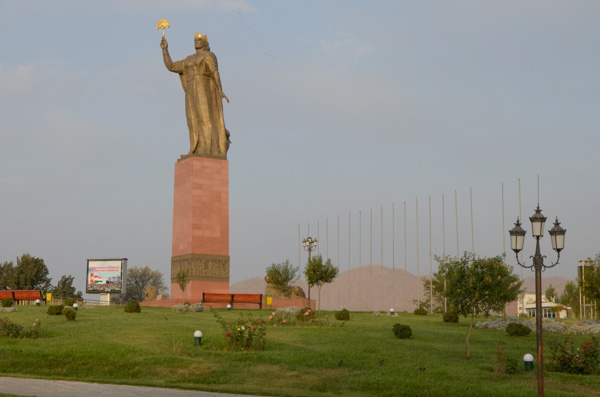 This was once the site of the largest statue of Lenin in Central Asia. It now holds a statue of Ismail Somoni or Samani. Many consider him to be the "father" of the Tajik nation. The currency is named after him.

We visited his mausoleum in Bukhara. 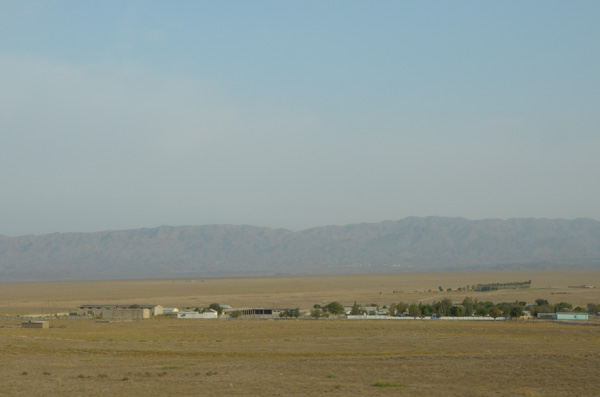 On our way to Uzbekistan we traveled through miles of arid grasslands. During Soviet times this land was irrigated and productive, but since independence much of the irrigation network has deteriorated and the land has returned to desert.

In a way this was sad to see, but the ultimate cost of poorly planned irrigation in this region is desertification of a much larger area. 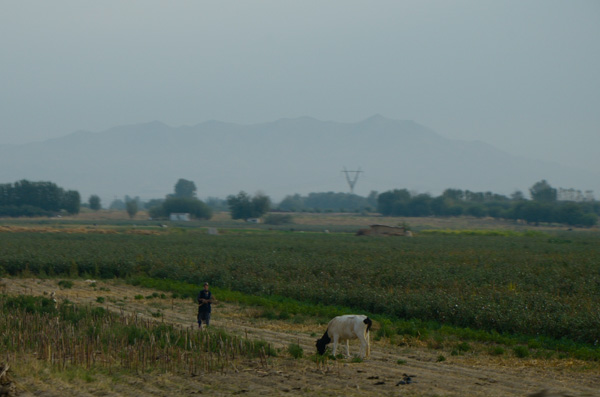 A common sight on our travels. Cotton fields (already picked in this case, but often with workers in the field). Livestock grazing on stubble remaining after harvest. Women or children watching the livestock. 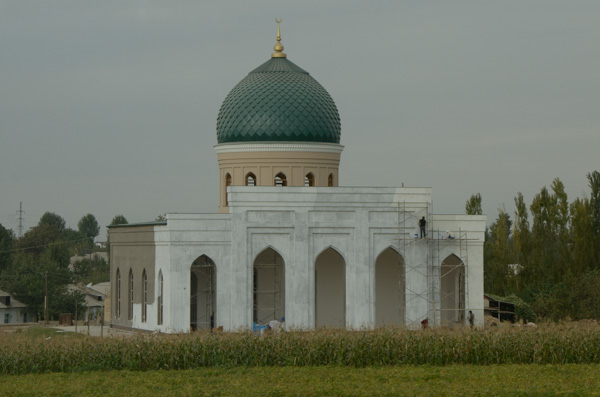 Another common sight: a mosque under construction. Religious affiliation has increased dramatically since independence, but it isn't clear that the population is well-educated in the tenets of Islam. Such ignorance leads to exploitation by radical "fundamentalists" who twist the faith to justify violence and degradation of women as has been seen in Afghanistan and Pakistan.

Everyone we spoke to was adamant that this could not happen in Central Asia and I hope and pray that they are right.