On the Silk Road in Central Asia
Kyrgyzstan - Osh

80% of Kyrgyzstan is mountainous. The remainder lies in two major valleys: The northern valley where Bishkek is located and the southern Fergana valley shared with Uzbekistan and Tajikistan. Getting from Bishkek to Osh in the Fergana valley requires an airplane ride. The airline we took was named Avia Traffic. Now that we're home, I discover that this airline, along with all the other Kyrgyzstan airlines, is barred from the European Union due to safety and maintenance concerns! Nevertheless, our sturdy 737 made it OK. The flight is over high mountains that were already (still?) snow-covered in part during our trip in October and the views were spectacular. Too bad my camera was in the overhead bin. 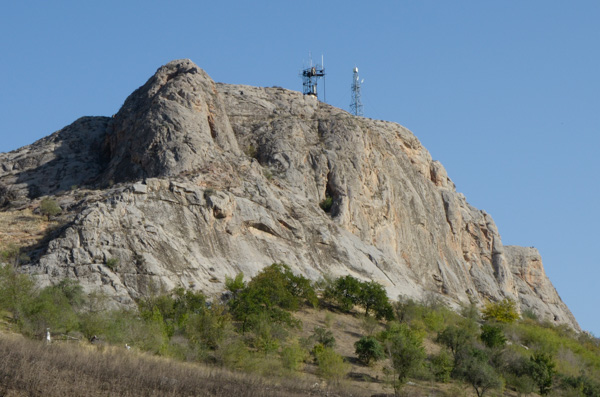 This rock outcropping in the middle of the city of Osh is called Suleiman's Throne. Suleiman (Sulayman or Solomon) was a prophet in the Quran. Kyrgyz tradition locates his tomb here. Whether or not he is in it is an open question.

First we visited a museum carved by the Soviets into the mountain. Then we followed a path right above the treeline toward a small shrine built by Babur, the founder of the Mughal dynasty of India. Babur descended from Tamerlane and Genghis Khan.

We were joined by students from the local language institute who wanted to practice their English and answer questions about themselves and the area.

English was the third language for many of them after Kyrgyz and Russian. Some were also studying French and German.

The pathway was well-maintained in part and rugged in part. We were warned that some of it would be difficult and several of our group elected to skip the hike.

A number of trails led up the mountain to petroglyphs and caves where pilgrims might stay. There were also some caves right along the path. 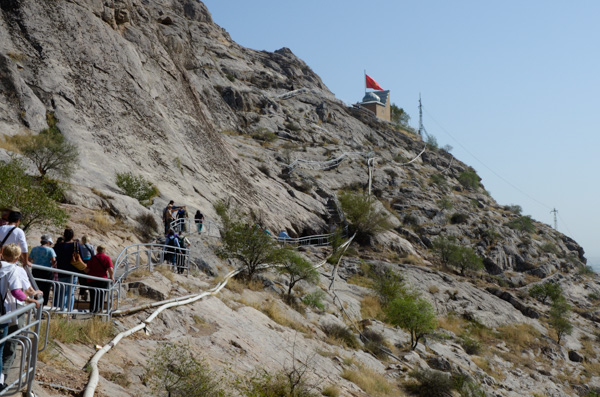 It's getting challenging. Some folks needed help to clamber over the steep and broken steps.

The shrine is visible around the shoulder of the mountain. 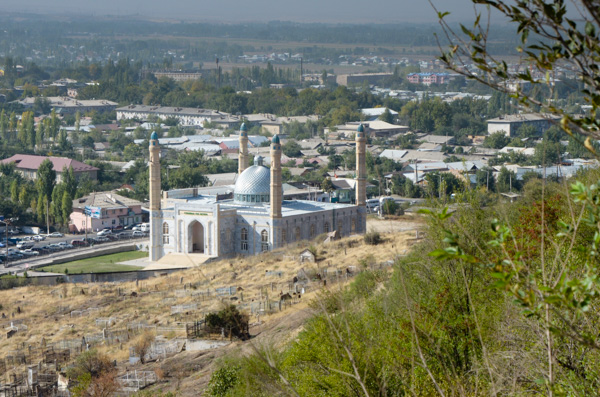 The base of the mountain was a large cemetery. The mosque is quite new.

There are numerous areas on the mountain renowned for various healing powers. This particular outcropping is a slide where women who wish to become pregnant scoot along.

The rock has been worn smooth by hopeful moms-to-be. 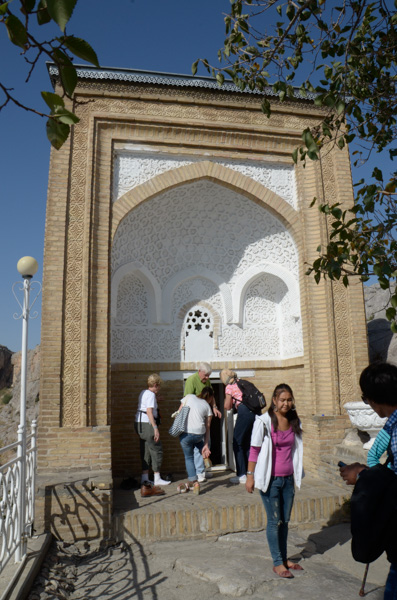 I didn't go in, but there were rocks with indentations that tradition says were made by Suleiman's ... or Mohammad's ... or Babur's ... knees. 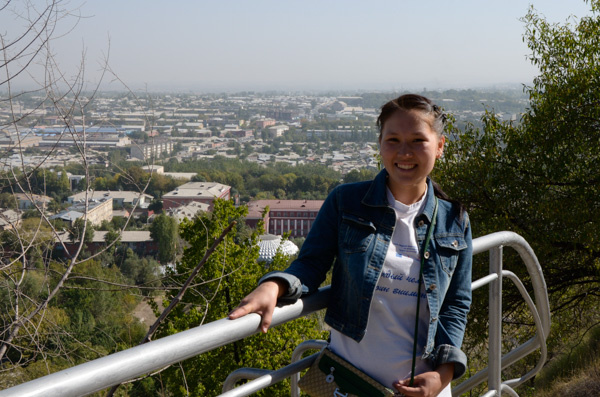 This lovely youngster spent some time with me. I don't recall her Kyrgyz name, but she said it translates to "Hope."

Her English was good – better than most of the others. She has a great desire to travel and someday visit the US. Unfortunately her notion of life in the US was based entirely on American movies. I tried to explain that movies were NOT indicative of the real world, but I'm not sure she was convinced.

This was our last adventure in Kyrgyzstan. After climbing down the mountain and bidding goodbye to the students, we were off to a tiny corner of Uzbekistan for a night on our way to Tajikistan.