On the Silk Road in Central Asia
Kyrgyzstan - Bishtek

Since the collapse of the Soviet Union, relations among the former Republics have been up and down. As a result of this and other considerations, border crossings are fraught with varying degrees of difficulty. Kyrgyzstan is the most receptive nation -- the only country we visited that didn't require a visa for US citizens. This particular border was the only one that was officially open, although all the others were sufficiently "open" to allow our group to transit. This distinction was not the only thing that confused me about travel here. This crossing was the least eventful transit of the trip. The only difficulty was lugging our bags from one side to the other because buses are not allowed to cross. The trip materials made it clear that travellers would have to handle ALL of their luggage. Conditions justified that warning. Too bad that not everyone paid attention.

One unsavory custom in Kyrgyzstan is "bride kidnapping." If a man's family cannot afford the bride price of a potential mate, the groom simply kidnaps her. The women of his family then try to convince her to agree to the wedding. Sometimes she does. Sometimes the groom and his intended have an understanding ahead of time, but not always. A PBS video documents the dark side of this custom. Jama read the transcript of this program to us as we traveled toward the border. You can imagine that we peppered our local guide, who had not kidnapped his wife, with questions about this practice. It is against the law, but since independence it has reappeared in rare instances. 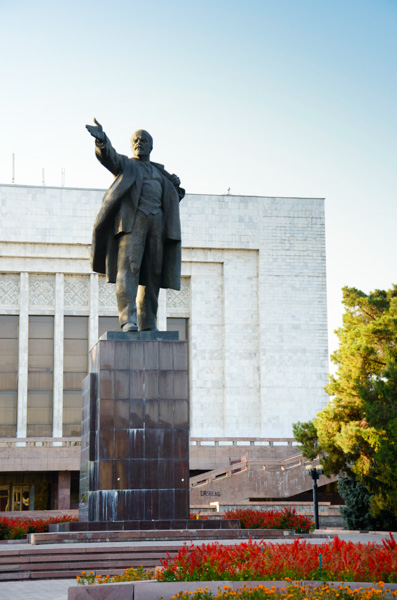 Although most statues of Lenin in these former SSRs have been removed, this one still stands in Bishkek. It was once in a more prominent location, but it is now tucked behind the Kyrgyz State Museum.

Since the time of our trip, memorial statues and their placement have become an issue here in the US -- especially regarding Confederate "heroes." 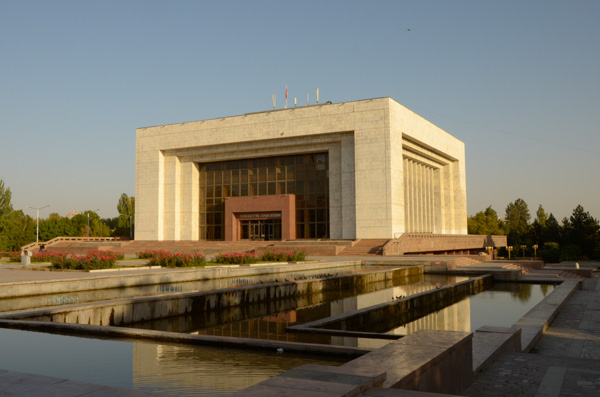 We did not visit the museum itself. Pavement surrounding it was in poor condition, which was a common occurrance. Our guides warned us throughout the trip to watch our steps, and the warning was apt.

The fountains surrounding the museum were not working, but some of the pools still held water. 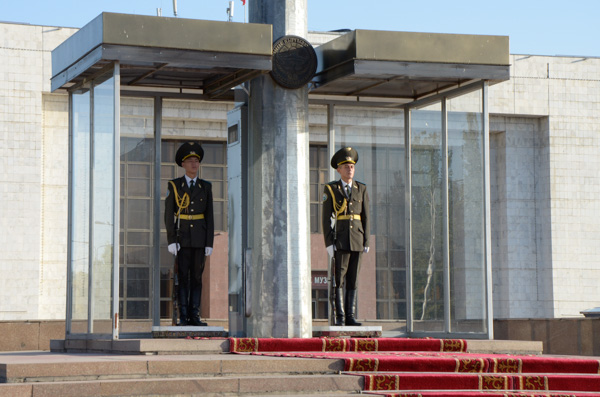 These guards in front of the museum flank an enormous flagpole holding a correspondingly enormous Kyrgyz flag. The symbolism of the flag is interesting. The center feature is the crown of a traditional yurt to indicate hospitality and the family. 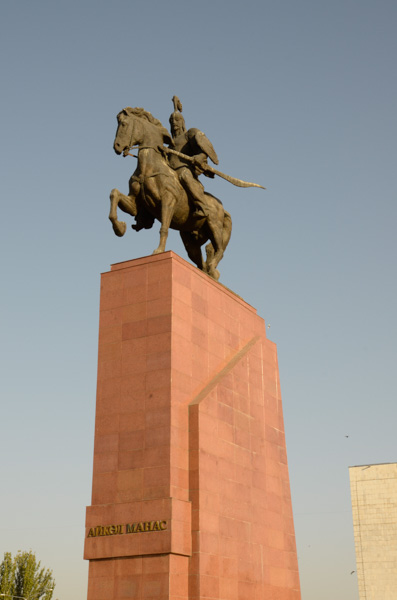 The statue of Kyrgyz national hero Manas now stands where the Lenin statue once stood. Manas is a semi-legendary figure who united the many tribes of the Kyrgyz people. There is long and perhaps ancient epic poem describing his life and exploits. No one knows the actual age of the poem, but our guide said it was over 1000 years old, although much modified over the years. Later in our trip we heard a partial recitation.

The label on the statue identifies the hero as "MAHAC" -- the Cyrillic spelling of MANAS. All of the countries we visited were long ruled by Russia and all still use Russian as an official language in addition to the local language. They all once used the Cyrillic alphabet to write their local language. Since independence the situation has changed. Some, including Uzbekistan and Turkmenistan, now use the Latin alphabet, with additional symbols. Others, including Kazakhstan and Kyrgyzstan continue to use Cyrillic.

Signs may be in Cyrillic or Latin depending on their age. 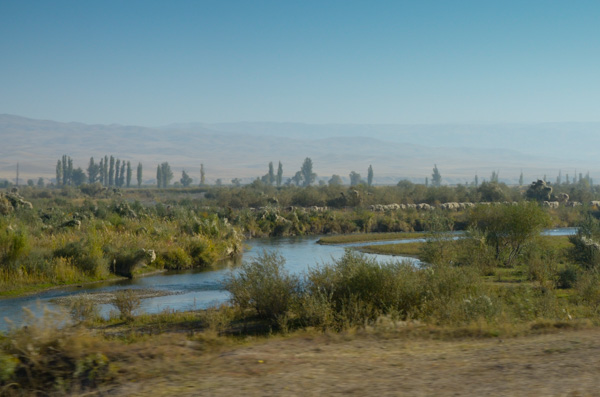 Even in this arid part of the world there are many rivers, which feed what is left of the Aral Sea. The rivers have been depleted by irrigation and the sea is disappearing. This is a current and future ecological disaster, but there doesn't seem to be the political will needed to bridge national boundaries and develop a workable regional recovery policy.

The tall poplars seen in the background are planted for windbreaks and for building materials. 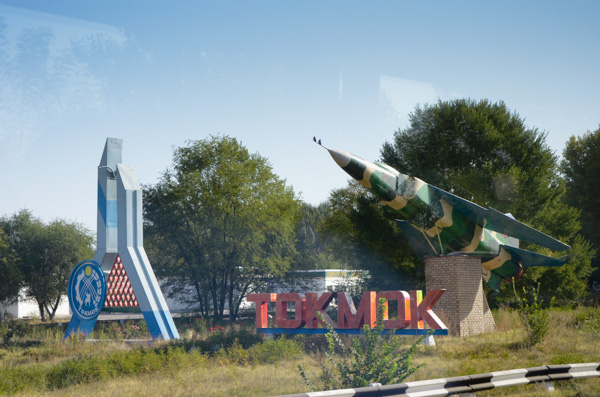 The small town Tokmok was once the site of a Soviet airbase. More recently it has achieved notoriety as the hometown of the ethnic Chechen brothers who were the Boston Marathon bombers.

Neither of those was the region why we visited. 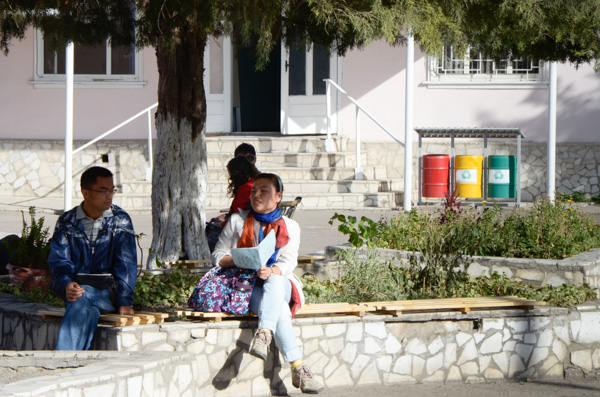 Our goal was the International University of Central Asia, an institution headed by an American named John Clark. We toured the facility and chatted with some of the staff and students.

The Ignite Hope Foundation supports education in Central Asia, China and Africa and sponsors the school. It partners with educational institutions in Europe and elsewhere. 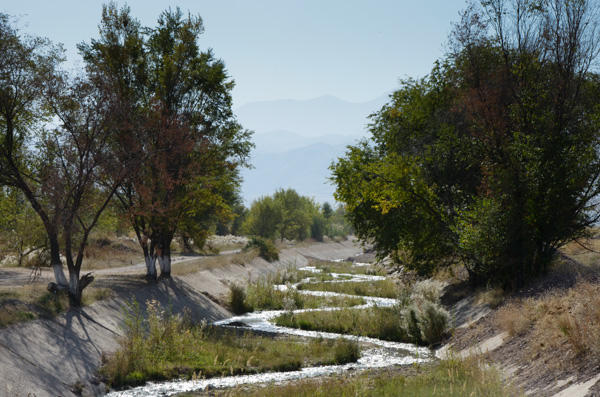 After visiting the University, we traveled to the site of the ancient city of Balasugan.

Access to water was a prerequisite for settlement along the Silk Road. 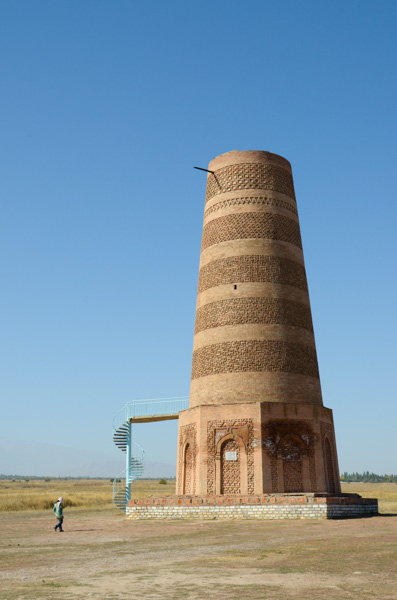 Our guides said the Burana Tower, dating to the 10th or 11th century, was a watchtower – one of many that once existed along the Silk Road. Online resources, however, state that it was a minaret.

All agree that it was once much higher. The top was lost in an earthquake in the 15th century, which also destroyed the settlement.

The "crowd" you see here was typical of many of the places we visited. We were often the only tourists. We were always the only American tourists.

It is possible to climb up inside the tower, but none of us did. I considered it, but the stairs were steep and time was short. 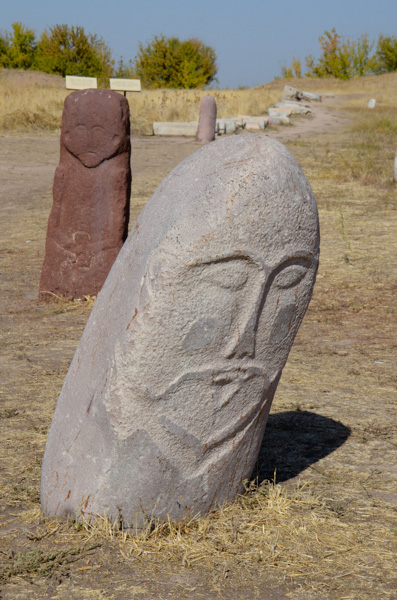 Some of the stones had written inscriptions.

There were also petroglyphs from even earlier times, but there wasn't time to prowl too much so I didn't see any of them. 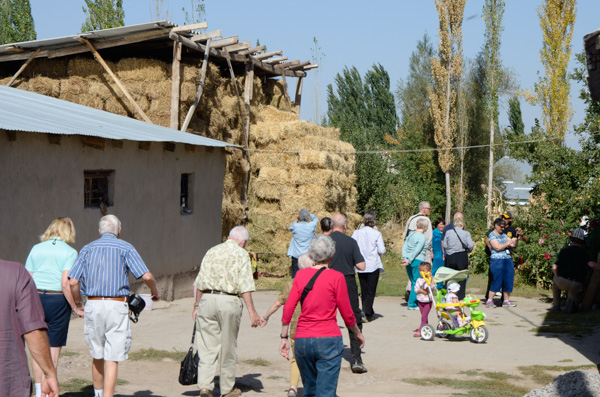 After our time at the Burana tower, we visited a family home for lunch. It wasn't really "en famille" as this family offers such meals to groups of tourists. There was a Japanese group also having lunch.

Regardless, the food was delicious, and after the meal we had a demonstration of traditional Kyrgyz felt-making.

The children welcomed us with smiles and "hellos."

Our local guide translates the discussion of felt-making. The process starts with dampened wool rolled up in the reed mats shown beside the woman. I don't recall if the wool is dyed before or after being felted. 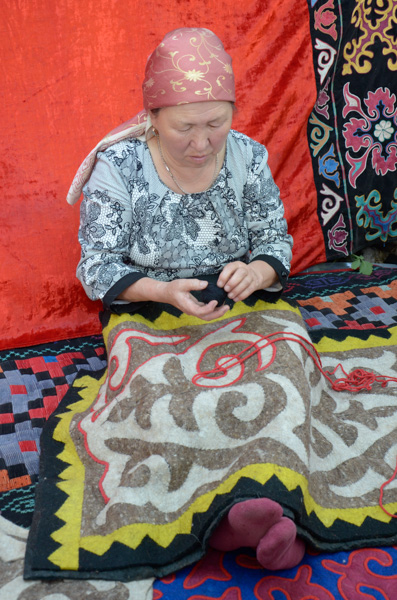 This woman has cut out felt to be pieced together. The field is made up of undyed natural wool. After she stitches the design to the backing, she adds decorative piping to reinforce the joined edges.

In contrast, this design was created by embroidery on a woven background. The figures are traditional.

Wherever we went we saw a great resurgence of traditional handicrafts. The Soviets repressed such expressions of tribal identity, but enough knowledge survived, sometimes in secret, that it is being rediscovered. 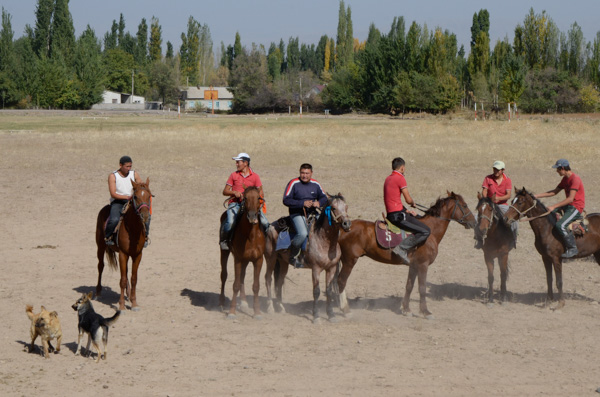 After lunch we were treated to a demonstration of traditional horse games. These and similar contests can be found throughout the region.

Some of the competitions appeared to be individual contests, but at least one was a team effort. It may be that they all were. Different teams, red and blue, are identified by fabric tied to the horses' bridles.

These local villagers were happy for the opportunity to come out and play for pay. 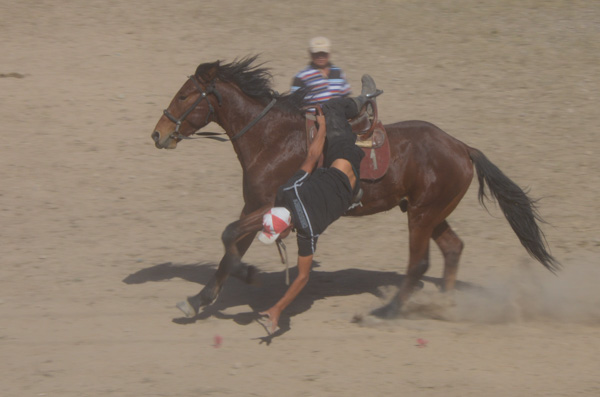 The first contest involved galloping along a track and picking up a small sack from the ground. When (if) the contestant nabbed the sack, he would throw it into the air.

The success rate was not high!

The picture is hazy because of the dust kicked up as the horses galloped down the track.

The next contest was horseback wresting. Contenders from each team pair up and try to unhorse their opponents. The horses are maneuvered into positions that increase leverage for their riders.

Although it looks like the guy on the black horse is a goner, there were amazing recoveries in some of these contests.

The picture shows the minimalist saddle. Our saddles here are built on trees such as this as the base for much more padding and leather. Even heavy Western saddles don't have much larger trees than seen here. 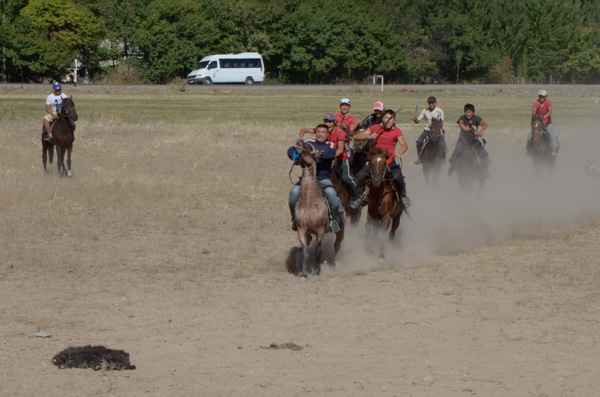 In the infamous game called variously Kok-Boru, Kokpar or Buzkashi, the competitions revolved around picking up a goat carcass and keeping possession of it long enough to heave it into the goal.

They had slaughtered the goat earlier in the day and removed its head and hoofs.

Rules vary depending on where the game is played. 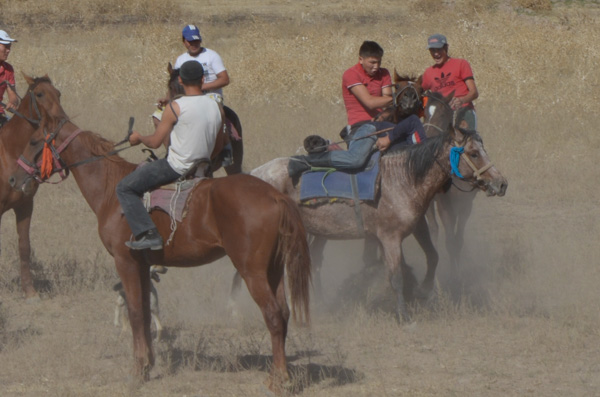 I asked and there are no assigned "positions" such as forward and guard, but some individuals seemed better at certain things. The blue team rider on the roan horse was the star of the game.

Two riders are striving to pick up the carcass, which has to be a minimum weight – about 70-80 pounds!

This game originated among nomadic shepherds training to snatch a wolf threatening the sheep and throw it so as to break its back. 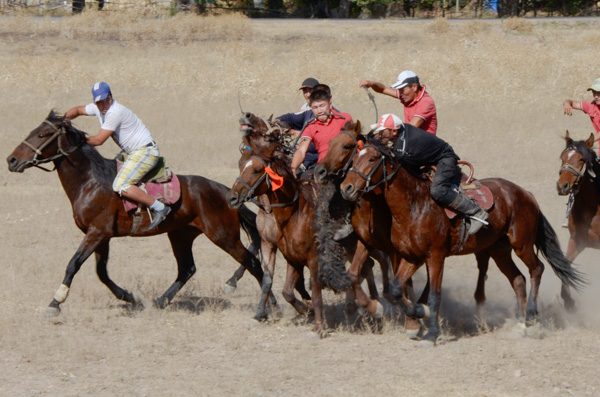 Once the goat has been obtained, the opposing team tries to grab it away. Team members defend the goat carrier. I don't believe that the red team ever made a goal.

One of the players was riding a mare with a young foal, perhaps five months old. The youngster was gamely keeping up with the action.

At least a couple of the horses were stallions. 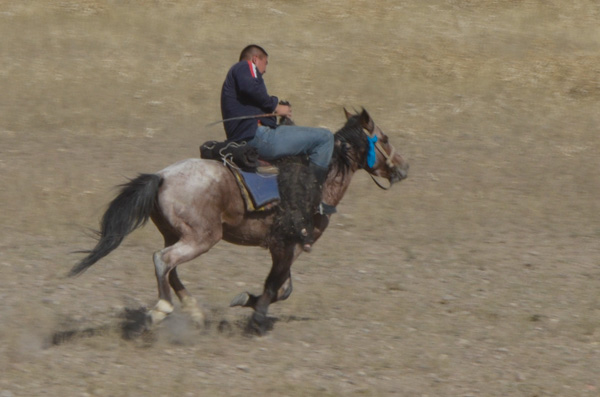 The rider on the roan stallion has won the goat and is in the clear on his way to the goal. Once a rider has gotten the carcass, he tucks it under his leg as shown here. I suspect this has two benefits: it makes it harder for opponents to snatch the prize away, and it also makes it easier to carry that weight.

I don't have a picture of the actual goal, but it is a cylinder high enough that the rider has to heave the heavy carcass into it. 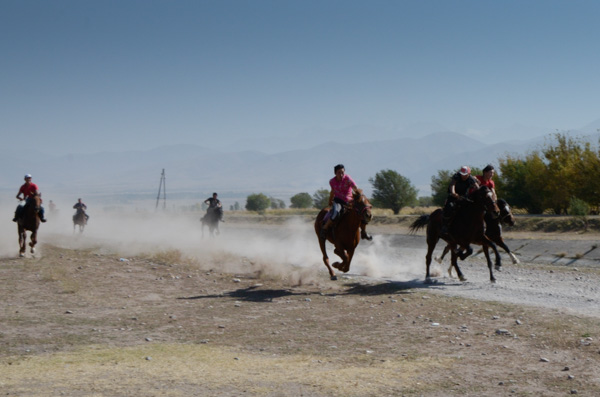 The games ended with a straight-ahead horse race.

Several of our fellow travelers knew that I was a horse-lover and asked if I saw anything to be concerned about in these games. Certainly they were rough, but no, I didn't see anything I would classify as abuse. I've seen much more abusive behavior in US horseshows. The animals seemed on the whole well-cared-for and well trained.

As for the deceased goat.... After the games are over, there is a big barbeque. They say the goat meat is exceptionally tender after being used in one of these games. 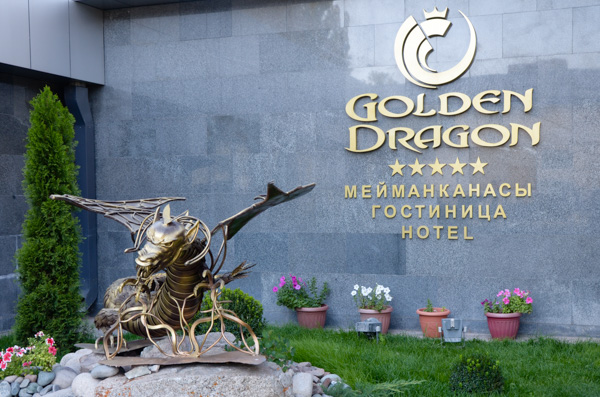 Because of the scope of our travels we stayed only one night in several of the hotels. The longest we stayed in any one place was in Bukhara, where we stopped three nights. Jim and I are not fond of packing & unpacking & packing & unpacking, etc., but there is no other way to see what we wanted to see in the time available.

Of the many hotels some were, of course, more favored than others. This hotel in Bishtek was one of our favorites. Their breakfast was superb. 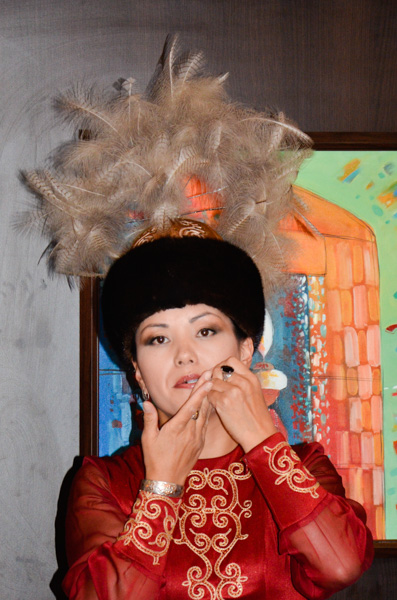 That evening at dinner we enjoyed a performance by members of the Kyrgyzstan Folklore Company. I wish I could have taken a video of this lovely lady as she played the Jew's Harp. The tune was nice, but the grace of her hands as she played was exceptional. 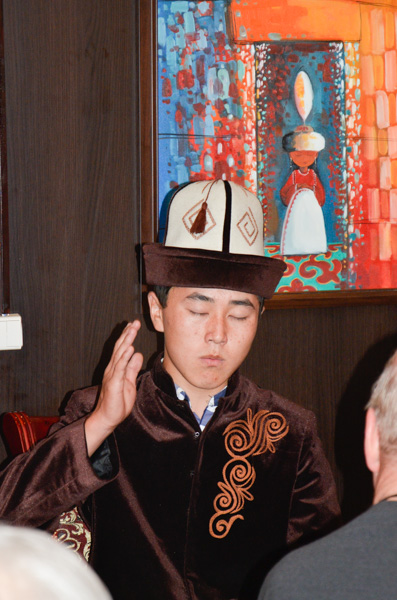 There was also a recitation of the Manas epic mentioned earlier. The young manaschi was in a trance as he chanted the poem with accompanying gestures and facial expressions.

The following day we hopped a plane across the mountains to Osh in the Fergana valley.