On the Silk Road in Central Asia
Kazakhstan

Our first stop was Almaty, Kazakhstan. In the time of the Silk Road, the city was called Almatu. During Soviet times it was Alma-Ata, the capital of the Kazakh Soviet Socialist Republic. After independence, the name changed yet again to Almaty -- and the capital was moved.

Kazakhstan is huge, the 9th largest country in the world, larger than all of Western Europe combined. We saw a tiny fraction of it. The population is ethnically diverse and the largest of any of the countries we saw. It has vast oil and natural gas reserves that are basis for the nation's relative prosperity.

We started the day with a visit to the State Museum, which we visited to get an overview of Kazakh culture. Unlike most places, which allowed photos (for a fee), pictures were not allowed. The exhibits of traditional clothes and a large "wedding yurt" were fabulous. The original of the famous Golden Man (or Princess) found near here is in the new capital, Astana, but a copy is prominently displayed in the rotunda.

Our next stop on our city tour was the amusement park at the top of Kok Tobe, a hill on the outskirts of the city. This overview gives an indication of the scope of this city of about 1.5 million. Visibility was limited on this hazy day. 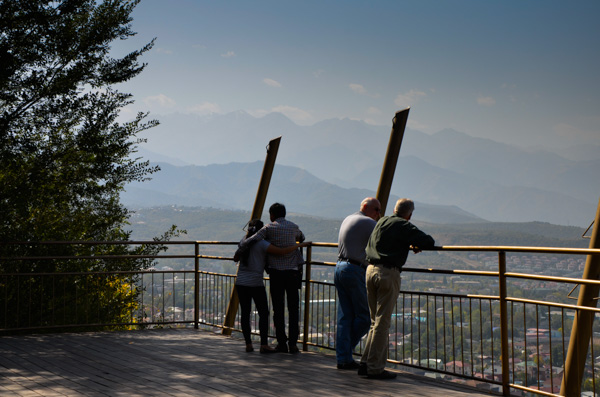 We could also view the neighboring Tian Shan (Celestial) Mountains. Some peaks in this range exceed 23K feet. We saw snow on the peaks through the haze. 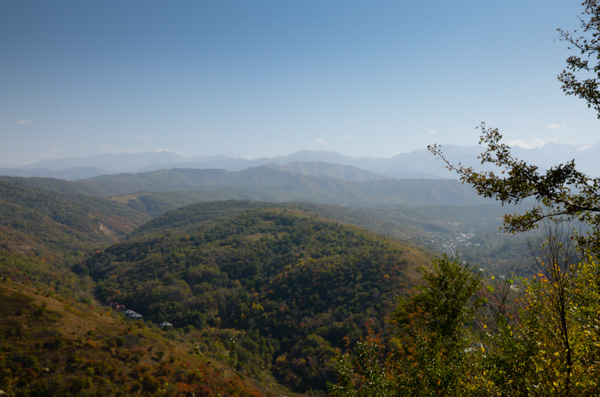 These low foothills were on the other side of the ridge.

From time to time I was disappointed that we didn't get to spend more time exploring the countryside away from the cities, but the three weeks was jam-packed as it was. If I were thirty years younger and could speak Russian, I'd come back.

We were surprised at the number of people we met who spoke English, but Russian is still the lingua franca. Not surprising since the area has been under Russian domination since at least the early 19th century through the Bolshevik revolution and up until independence in 1991. Russian influence is still strong.

The name Almaty derives from the word for "apple." The area may be the homeland of the ancestral apple. This apple fountain was a favored place for photos.

"Western" dress is favored in this cosmopolitan area. This wouldn't be the case throughout our trip.

Platform heels, such as the woman at right is wearing, were universally popular in the cities throughout "the Stans" regardless of the style of dress. 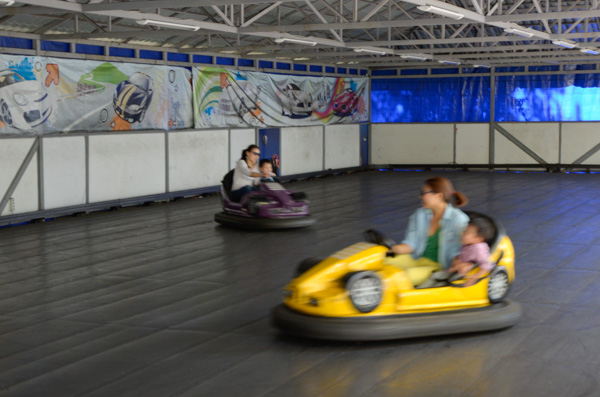 The park had all the typical amusements and concessions. We were there early in the day and Saturday crowds were just arriving.

These two moms had the bumper cars all to themselves. They seemed to be more interested in whizzing about rather than crashing into each other. The kids were full of delighted squeals. 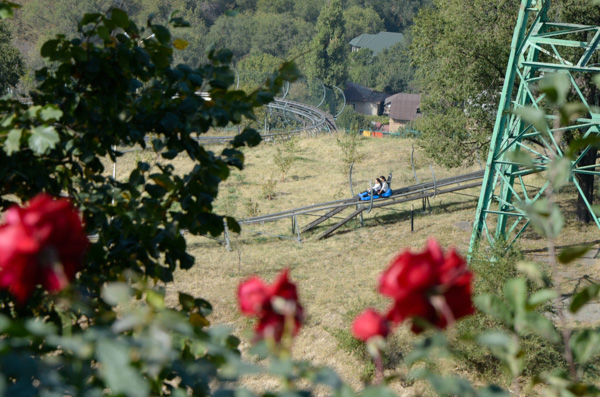 Another source of loud squeals was the "roller coaster" that started at the top of the hill and swooped down into the city. An aerial tram takes people back up. (A support pylon can be seen at right.) I have no idea how they get the cars back up to the top.

While we were there a happy wedding party arrived on the tram. Wedding parties were a common sight throughout our visit. 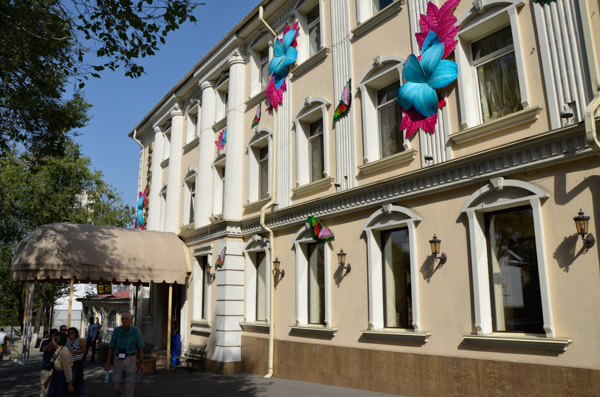 Lunch at this whimsically decorated restaurant set the tone for the delicious meals we had during our travels. My favorite feature was the array of "cooked salads" & breads that started every meal. Next came soup. Then, after everyone was already full, came the main course. But of course we had to remember to save room for dessert. It took all of my Weight Watcher training to keep from piling on the pounds.

Jama warned us to avoid uncooked veggies, unpeeled fruit, and tap water. The food & water isn't necessarily contaminated, but the microbes are not the ones our systems are accustomed to. Ignoring his advice came at a price. 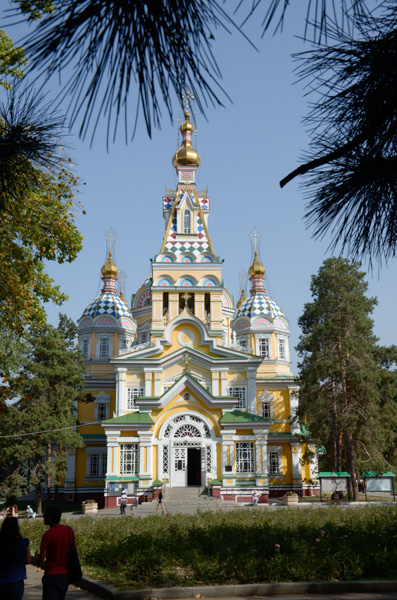 Our next stop was Panfilov Park where we visited the Zenkov Cathedral. It was built by the Russian Orthodox Church in the early 20th century and was one of the few buildings that survived the 1911 earthquake that devastated Almaty. (The entire region is subject to large earthquakes, but we didn't feel any while we were there.)

In contradiction to its appearance, the cathedral is built entirely of wood – including the nails.

During the Soviet era it was used as a museum, but since independence it has been returned to service as a house of worship.

The interior was beautiful, but no pictures were allowed. 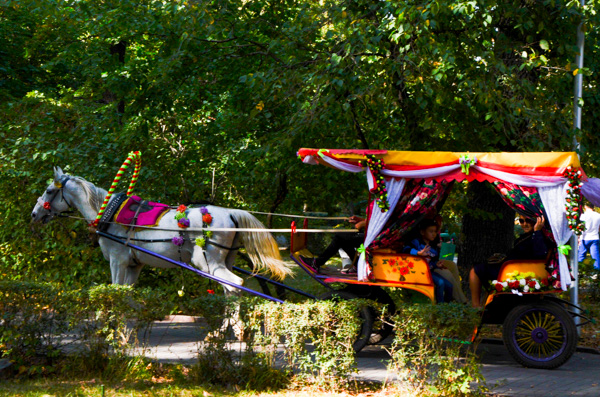 Panfilov Park is a popular place for carriage rides. As we listened to our city guide describe Almaty history we were constantly moving aside to allow a carriage to pass. At least the bells on the harness warned us of their approach.

During the Tsarist era, homes in this area were so desirable that residents had to prove that they could afford to live there! 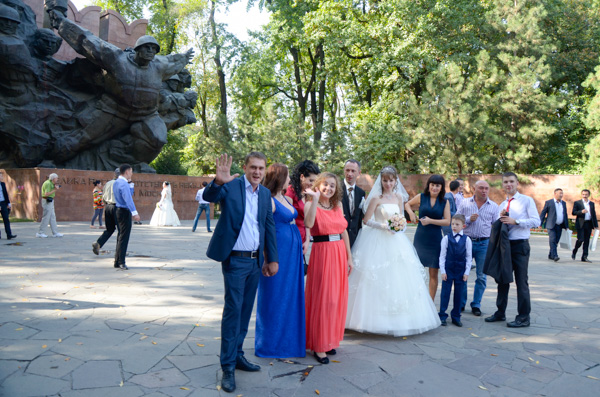 At most of the memorials we visited, there were one or more wedding parties taking pictures. This war memorial commemorates soldiers from all 15 Soviet Republics. The outline of the sculpture, partially shown in the background, is in the shape of the former Soviet Union.

Jama told us that brides typically rent their dresses since they will only be used once. Sensible! Grooms, on the other hand, purchase their tuxedoes because there will be other opportunities to use them.

Almost everyone we met, especially the children, was thrilled to pose for tourist photos. 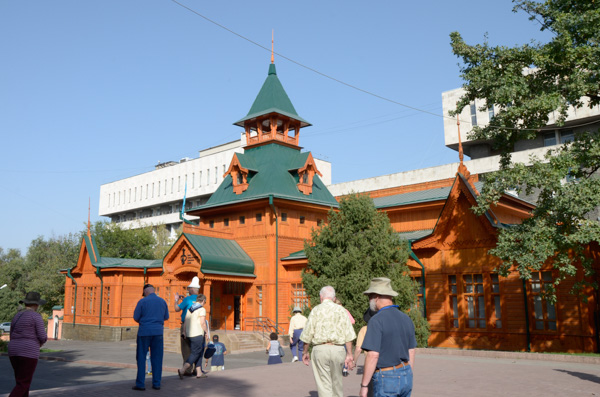 The Museum of Musical Instruments is located in this early 20th century building on the edge of the park. The building was constructed for the use of Russian military officers. 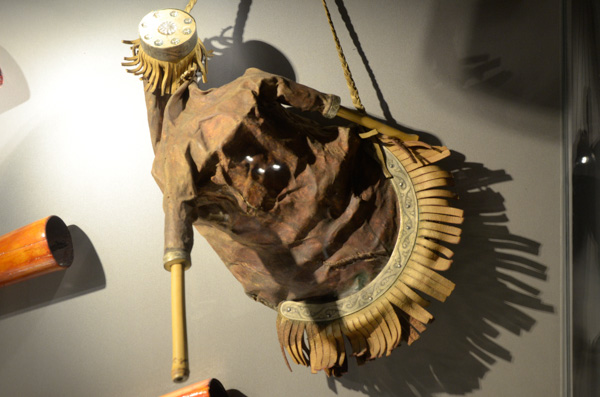 This bagpipe made from an animal stomach (probably a sheep) was one of the odder instruments in the collection.

This five-stringed instrument is similar to a violin. The frame is wooden and covered with rawhide.

Many of the stringed instruments in the collection are strung with horsehair as well as played with a horsehair bow. The sound is unusual – more organic than our modern violin.

There is no fingerboard. This was true of most of the instruments. They are played by placing the finger on the string at the appropriate harmonic spot. The finger may either rest on top of the string, or underneath it. 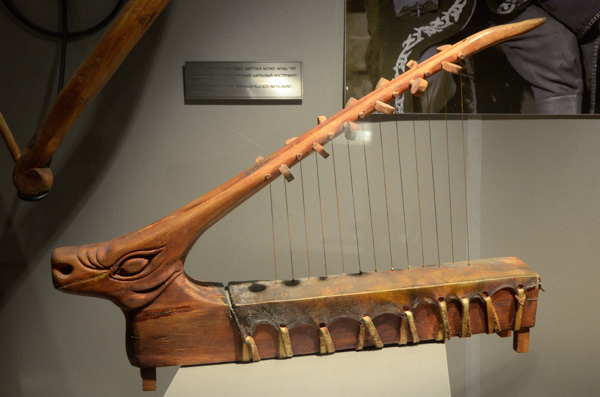 This harp-like instrument was carved to resemble an antelope.

We were treated to a concert by a young woman playing an instrument that would have been used by shamans. There was a sculpture of a similar instrument outside the museum.

She also played a type of Jew's harp that was a common folk instrument in this region. One was included in every folkloric performance that we saw on the trip.

After the music museum, many of our group visited the Green Bazaar, the first of a large number of bazaars that were included in the program. Jim and I elected to skip that part of the day as we were dragging from the time change.

Road Scholar prides itself in not emphasizing shopping opportunities. When you're visiting an attraction such as the Silk Road, however, which was all about trade and commerce, you have to get into the spirit of the thing. Many of our travelers did so with enthusiasm! 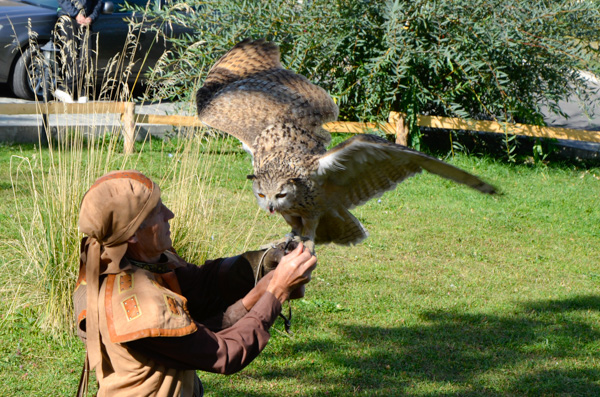 The next day we had a private session at a falcon farm. I wish I could remember the presenter's name. He was delightful and Jama says he is renowned in his field.

Falconry is an ancient hunting practice in the steppes. Owls are not used, but he had been working with this one youngster. The extent of its repertory was flying to a specified place and then coming when called.

At one point the handler directed it to the bleachers next to some of us. He admonished us not to touch it as that beak can do serious damage.

I thought I had taken note of this breed of hawk or falcon, but I can't find it. The presenter described how the birds are trained to return to the handler. They use chicks obtained from local egg producing establishments as a reward. (Rooster chicks aren't useful for producing eggs, so they are cheap to obtain.) This bird is gobbling down a chick held in the handler's glove (yes it was already dead). 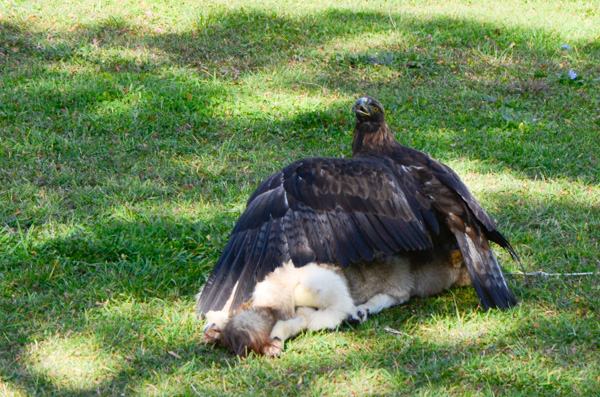 The archetypical hunting bird of the steppes is the golden eagle. In this demonstration an assistant riding a horse carried the bird away. Another assistant dragged the wolf skin along the ground and the eagle attacked it. When actually hunting the eagle isn't expected to kill the wolf, but only to immobilize it long enough for the hunter to deliver the coup de grace. 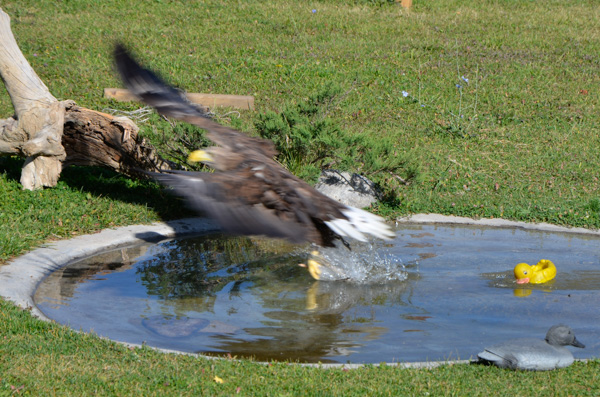 Another eagle participating in the show was this white-tailed eagle. It is related to the American Bald Eagle.

It swooped toward the water with talons outstretched and reached into the pond to capture its target. I think it was supposed to be getting the rubber ducky, in which case it missed. Twice.

In addition to the raptors, there were several vultures in the show. This one was striking with his (her?) white plumage. All the vultures had down on their heads and necks unlike our local variety. It made them much more appealing.

After the show we wandered around the farm to see more birds and other animals including a collection of hunting dogs and even wolves. There was a pair of wolves who put on quite a concerto of howls for the tourists.

After the falconry demonstration we headed out for our final outing in Kazakhstan: a luncheon in a yurt, the traditional dwelling of the steppes. A bicycle race in downtown Almaty had closed some of the streets causing unmarked detours. Our bus driver got lost at one point!

Our local guide, who had trained as a lawyer but decided she enjoyed guiding more, said she was seeing parts of town she had never visited before. 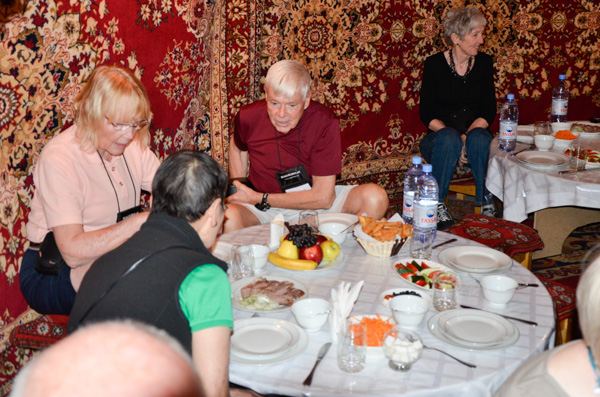 The food was delicious and plentiful. L-R Marilyn, Shim (with back to camera), Warren, and Polly.

There are tiny stools provided for us to sit on, but some found it easier to sit on the floor (Jim) or kneel (me). 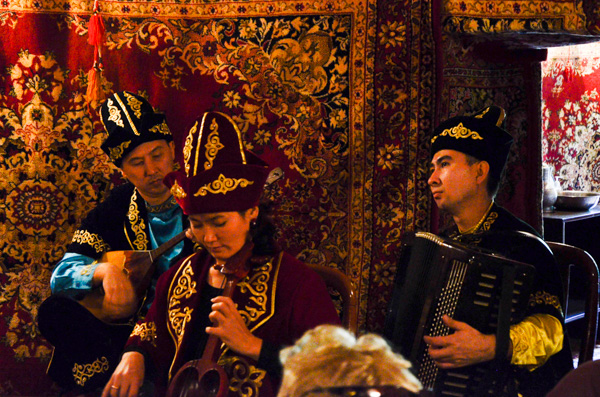 After lunch we left on our travels to Krygyzstan. 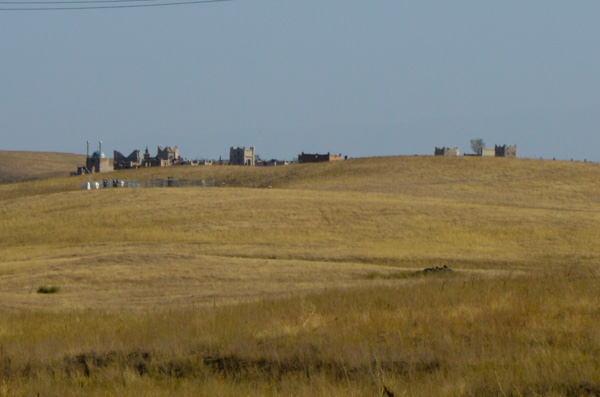 On our way to Bishtek we skirted a branch of the mountains by traveling east along the steppe.

This was our only experience of the vast Central Asian steppes. These structures in the distance are a cemetery. There were no towns nearby, but Jama said that nomads still return to ancestral burial grounds.