All things come to an end and I had to leave early for a planned visit with one of my friends from college. She had visited me along with another old friend earlier in the summer and I discovered that she lived only a few miles off the direct route between Valle Crucis and Lexington. We made arrangements for me to meet her so that we could go to church together and then have lunch.

As Robert Burns famously wrote, however: "The best-laid schemes o' mice an' men gang aft agley." I didn't get away as soon as expected and there was no cell coverage at a crucial point. So my friend, who was teaching Sunday School, had to leave without me. I arrived at her house and parked in the shade prepared to spend a restful time listening to that morning's very interesting Sirius/XM Vox Choral program. 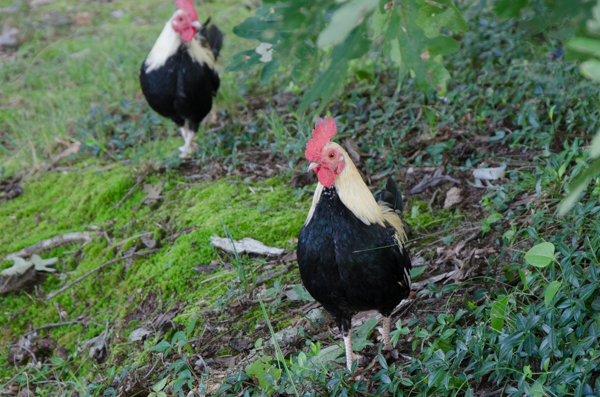 It wasn't as restful as I expected, however.

First, one of her neighbors stopped by to check on this strange car in the driveway. That's a good thing that folks in the country do for one another – keep an eye out.

Next I was visited by a pair of bantam roosters. They were keeping an eye out too. They checked the car and me out thoroughly. 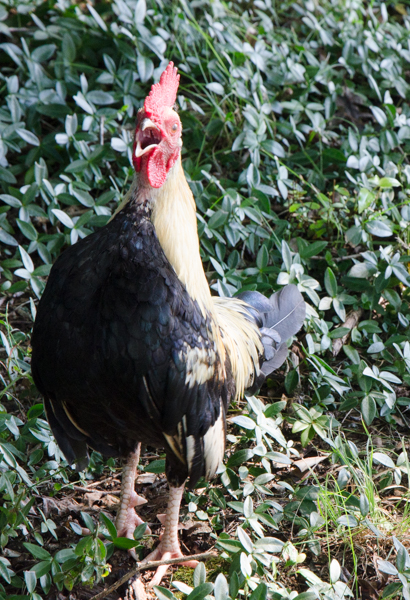 At one point one of the roosters, bothers of the same clutch as I later found out, located a very tasty (to a rooster) morsel in the shrubbery. He tried to sneak it away and feast in solitude, but his brother spied him. They engaged in quite a fighting match with flaring ruffs and slashing spurs. Unfortunately they were behind the car and I could only watch in the side-view mirror. No way to get a picture.

Eventually that altercation came to an amicable end. Shortly thereafter an unseen rooster in the barnyard started to crow. That set my pair into a competitive crowing match.

They didn't exactly harmonize with the Vox Choral program, but they were very entertaining. 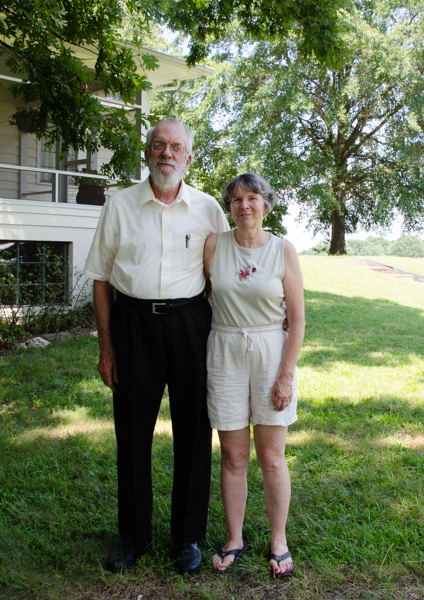 Not long after the roosters decided I was too boring and clucked off to explore new territory, my friend Margherita came home. She had left a message on my phone, which I didn't think to check, and had taped directions to the church to her door, which I also didn't think to check. So I made her miss church, but we had a great visit together.

Her husband Todd joined us after church and the three of us had a delicious meal and a good time. I hadn't seen Todd since a brief meeting at their wedding many years ago and it was good to get to know him a bit.

Our visit was too short, but I had to hit the road. We agreed to get together again next year if not before. 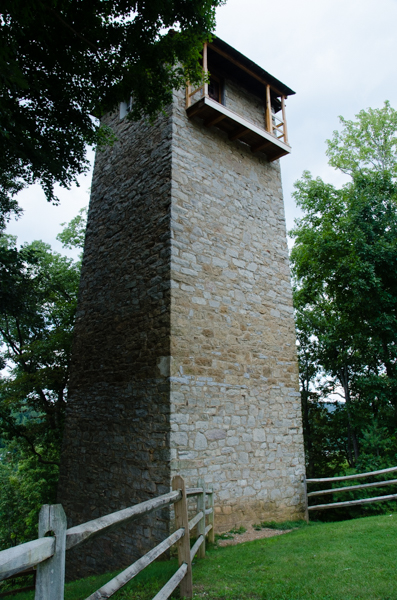 After being on the road for about an hour, that late-night jam started to catch up to me. Driving while drowsy is a very bad idea, so I began to think about a place to stop and get some exercise.

Shot Tower State Park is located just off I-77 before it connects with I-81. I had driven past it many times and thought I should stop someday. Well "someday" had arrived.

It's definitely worth a visit, even if you aren't drowsy. The tower was not open, but I had a good walk around the grounds. 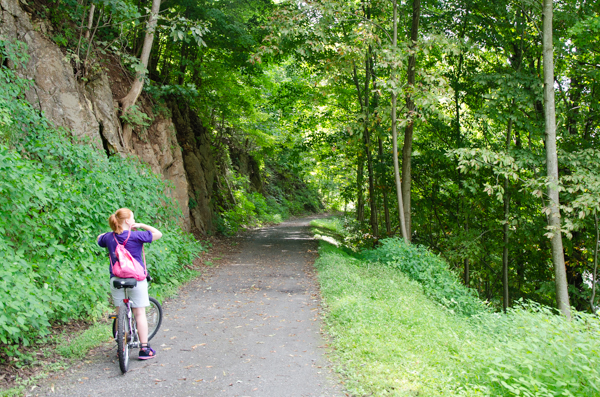 Downhill from the shot tower is the New River Trail State Park. The trail, which extends over 50 miles, allows walkers, cyclists and horseback riders. At the time I visited it seemed to be populated mostly with cyclists.

It's only a bit over two hours from home and I'm pondering a trip with my horse. Downhill from the New River Trail is (not surprisingly) the New River. Despite the name it is one of the oldest rivers in the world with an estimated age of 300 million years. It flows into the Ohio River and eventually into the Gulf of Mexico.

According to information at the site, the river was crossed here by a ferry into the 1950s when the US 52 bridge shown was built. This route was superseded in the 1980s when I-77 was built.

Between Valle Crucis and Lexington, I crossed the eastern continental divide three times – once in NC and twice in VA.

Refreshed by my stop, I continued on home.