On Saturday night we had the traditional Scottish ceildh (that's pronounced CAY-lee), an evening of fun and serious presentations. We had music, of course, but also recitations, dances and skits.

I'm sorry that I don't have pictures of all the presentations, but here's a sample. Of course I couldn't get a picture of my own participation. Melissa, Barbara and I opened the show with a demonstration of Melissa's drumming skills with Barbara playing a pipe march. I was supposed to be the drone accompaniment, but unfortunately I got lost right at the beginning and ended up only playing a single note throughout the piece. Well, it was certainly a drone. I was too flustered to even know if it was the right note! It all went perfectly in our practice sessions. 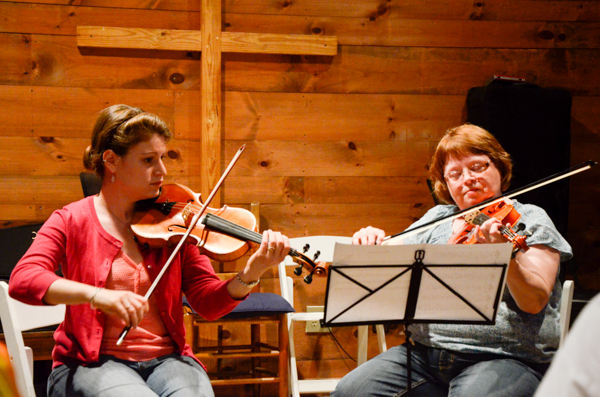 Jean had written a very lovely accompaniment to one of Melinda's tunes. They performed it together.

Not only are many Jinkers excellent players, there are numerous composers. One of our playbooks every year comprises tunes written by the instructors and students. 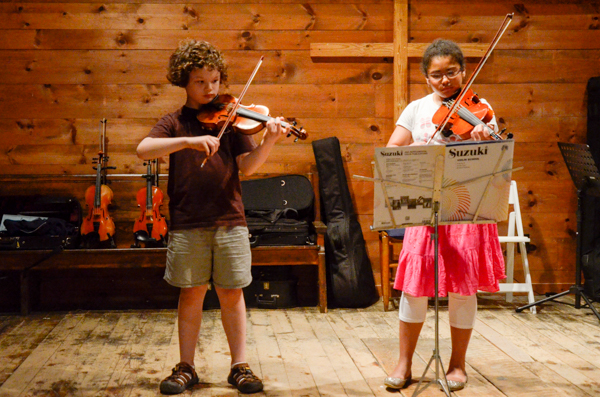 Our two youngest participants, Kyle and Ashley, played a duet. Kyle's mom told me that when she asked him what he wanted to do this summer, he only mentioned two music camps: Suzuki and Jink & Diddle. 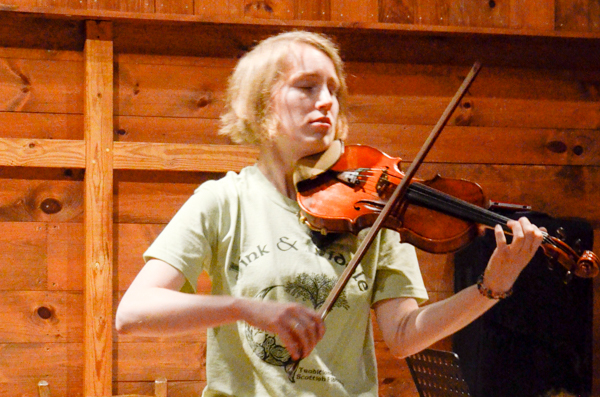 Joanna and Debi presented a devotional song. Debi accompanied with guitar while Joanna sang and played her violin. 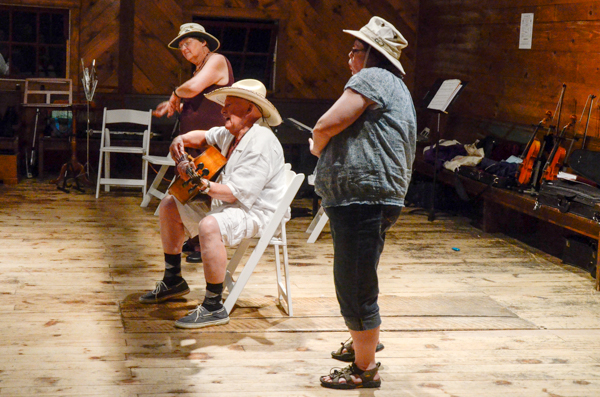 Sara & Maynard Johnson performed Long Tall Texan with help from Jean. That's not a big mariachi guitarron that Maynard is picking; it's his cello!

What a blast from the past that was. 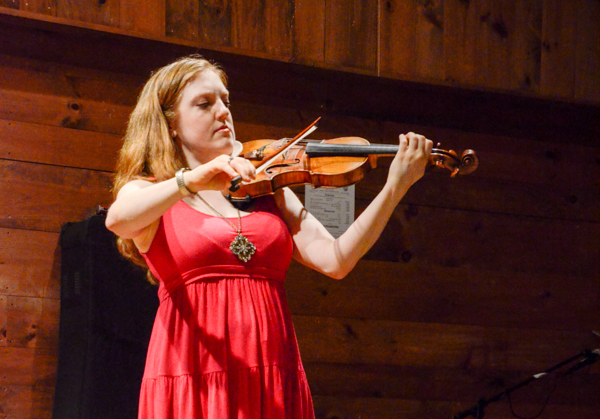 Rachel told us the story behind her recent album of lullabies. When her daughter Sylvia was born, she dreamed of rocking her to sleep with lullabies. Of course she couldn't play the violin and hold the baby at the same time, so she began to look for CDs of lullabies and found that none were to be had.

This was a clear challenge, so Rachel created such a CD.

For the ceildh Rachel performed Brahm's famous lullaby. It was a magical moment enhanced by wide-awake Sylvia's squeal when it was over. 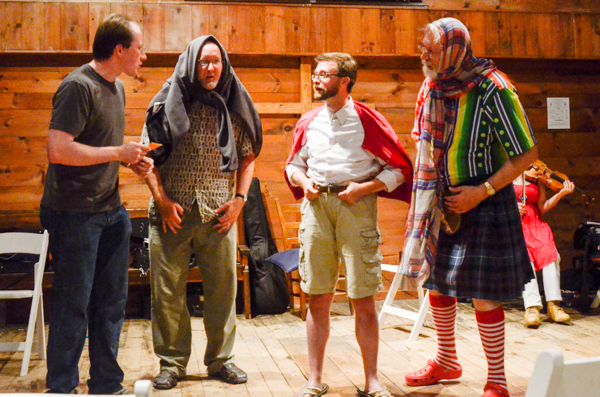 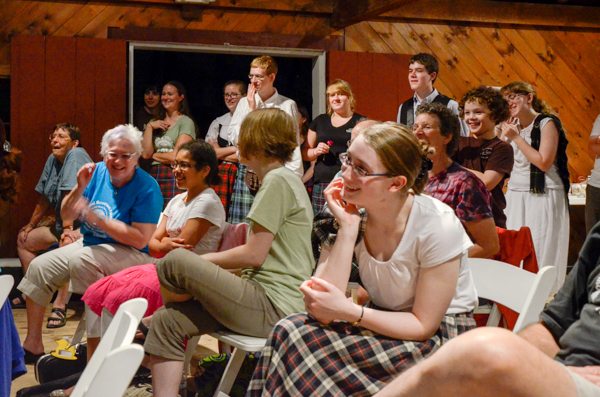 I forget the details, but it was hilarious as this picture of the audience shows. 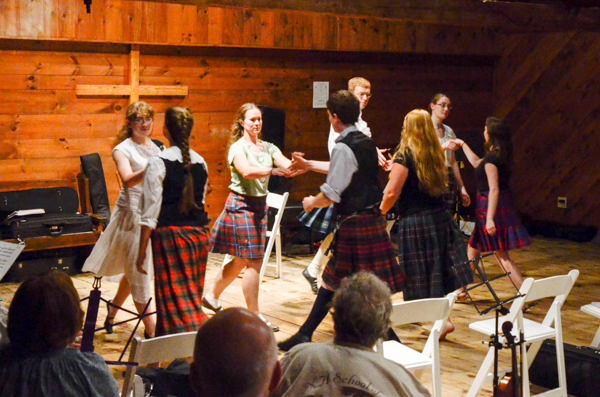 Moira choreographed a special dance and recruited these youngsters to learn and present it. In spite of its complicated patterns, they pulled it off without a hitch.

Earlier in the week Colyn brought up a point that had never occurred to me. The intricate steps of the country dances are related to the endless interweaving patterns of the Celtic knots. This also affects the interpretation of the music. 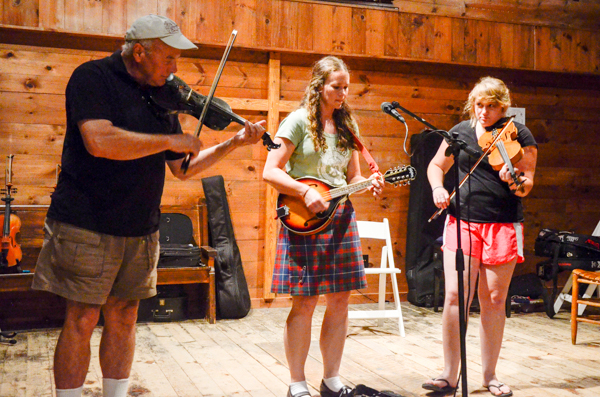 For something completely different, Gary, Annie and Alex led a sing-along of the Old Time tune Cluck Old Hen.

Well, perhaps not completely different – so many tunes are shared across traditions. 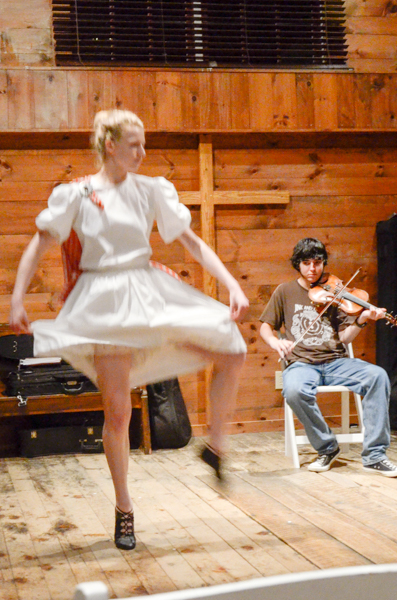 Catherine gave a spirited performance of a Highland Dance with David Klingler providing the music. The lack of focus isn't a problem with my camera -- Catherine is just moving too fast!

Catherine, David and others also participated in a skit called "August Holidays." They found some kind of special designation for all but one day in August. Who knew?

Senior Citizen's Day for me! 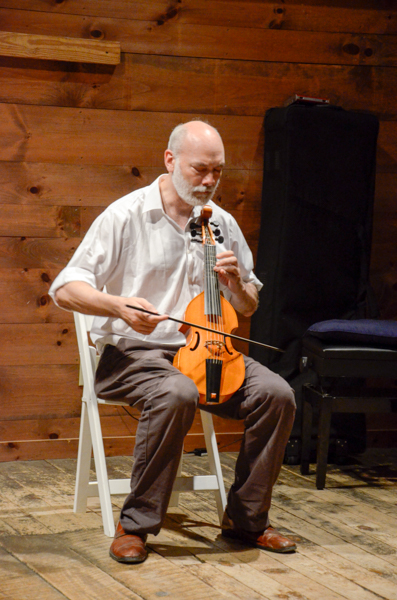 In our accompaniment class John Mark suggested an exercise in improvisation. It was designed to make us less afraid of making a mistake. As we sat in a circle he would start with a single note. The next player in the circle would add a note of his or her choice. This continued around the circle until the original player chose another note and others followed in turn. After a couple of passes, the participants began to add musical figures. Eventually everyone ceased playing.

The exercise was such a success, both in its intent and in the resulting harmonies, that we decided to do it for the ceildh. We all walked out with empty music stands and improvised. I don't suppose that the result was particularly profound, but it was a lot of fun and it didn't sound bad. 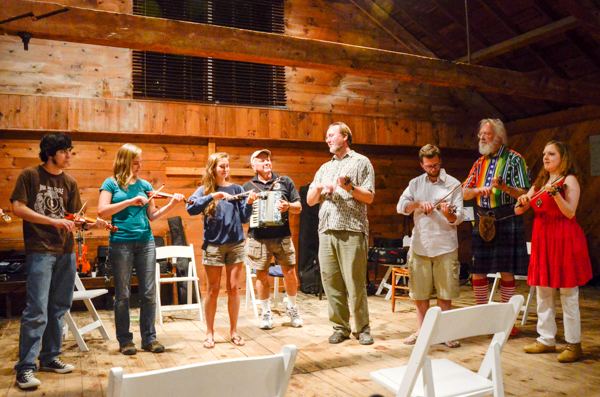 The final act was the pochette orchestra. John has a collection of these little instruments and recruited a number of players to augment David and others who brought their own.

They made a joyful noise!

I have been wanting something similar to take on travels, but true pochettes can be hard to find and, well, their tonal quality often leaves something to be desired. My answer has been the Cricket. It is small and lightweight enough to carry on a plane, and has a respectable sound. Now if I could just play as well as those two demonstration fiddlers! 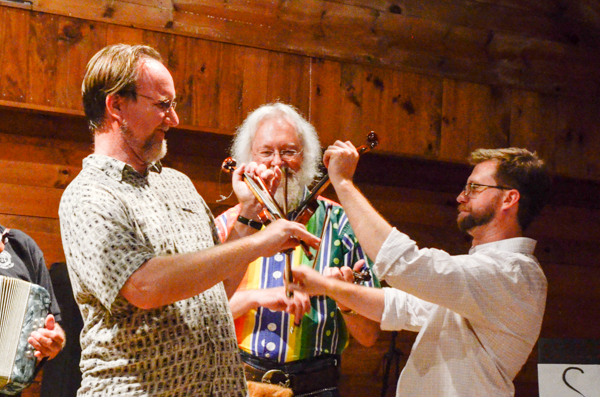 Dueling banjos was never like this! David and Colyn go at it while John looks on.

After the ceildh there was a jam session that lasted into the wee hours while participants enjoyed the plentiful snacks and various potations. I was thrilled that I could pick out accompaniments even though I didn't know all the tunes.

I didn't get much sleep that night because I wanted to leave early the next day to visit a college chum who lives in the area.

It was a wonderful week . Someday I hope to return, but for the past several years I've been attending the Strathgheny School founded by Melinda and David.