Dundee is very close to Aberdeen so the ship must have crawled overnight. Ever since the first couple of days aboard we had very smooth sailing and I was even able to forgo The Patch. We were enjoying breakfast on deck as we cruised into the harbor. The countryside was very beautiful. 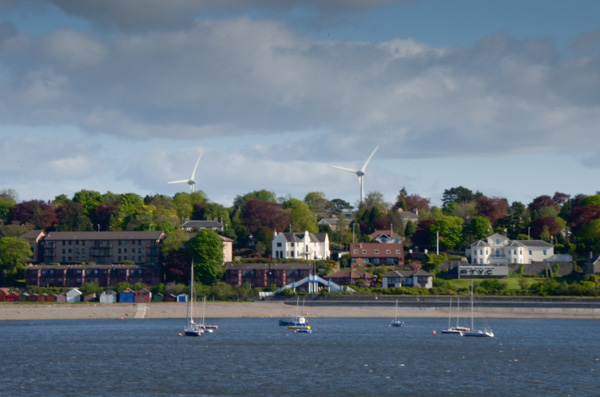 Wind turbines are a common sight in this windy part of the world. They remain controversial due to bird & bat deaths, but they don't kill as many birds (or other creatures) as fossil fuel production and pollution. The most vocal people on our cruise seemed to be anti-turbine, but there's another side to the story.

Until we humans return to hunter-gatherer technology, which I hope will not happen in my lifetime, we need to explore all the ways we can become better stewards of the environment. 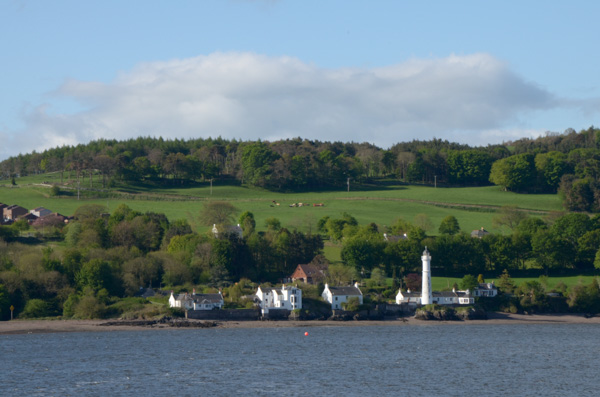 These are the Scottish lowlands. Perhaps they don't have the romance of the highlands, but they are very lovely. 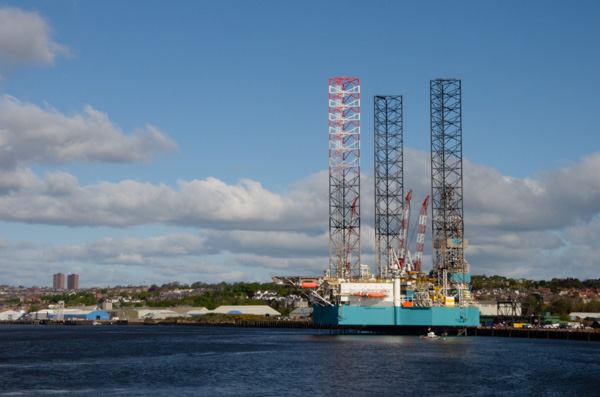 Dundee is a major center for building off-shore drilling rigs. There is plenty of color in the rigs and their service vessels. No battleship grey to be found. 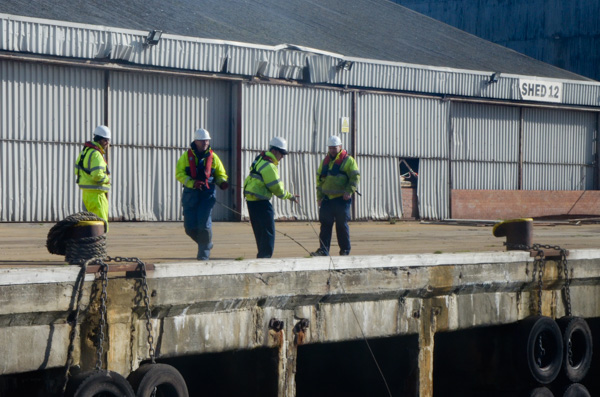 There seemed to be an excess of dock workers involved in tying up our ship at the pier. This crew of four was working the bow end. There was another crew at the stern.

I wondered if this was a union requirement. 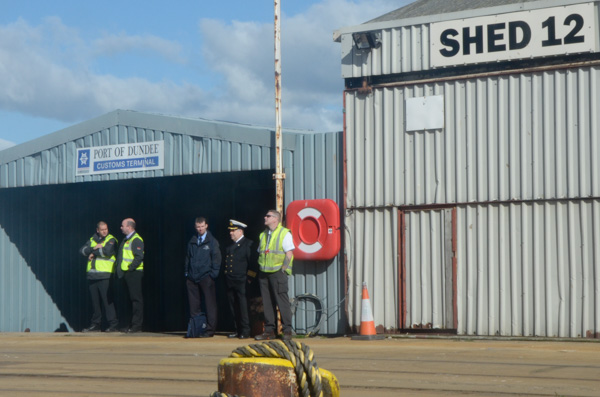 And of course, there are always supervisors.

Security, by the way, was quite visible at all our ports of call except Dublin. We were admonished to always have our ship's passes with us when we disembarked, but they weren't usually checked carefully, so I don't know how strict the security really is. 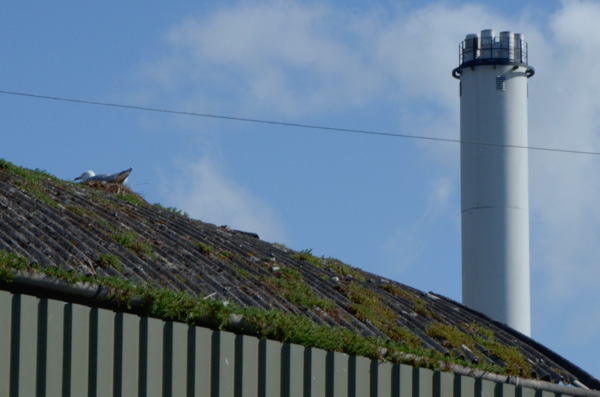 I had never seen a gull's nest before, but there were several nesting on the peak of the shed where our buses were loading. Given the winds that were whipping through here I was surprised that they weren't blown away. There are plenty of gulls, so I guess it worked out for them. 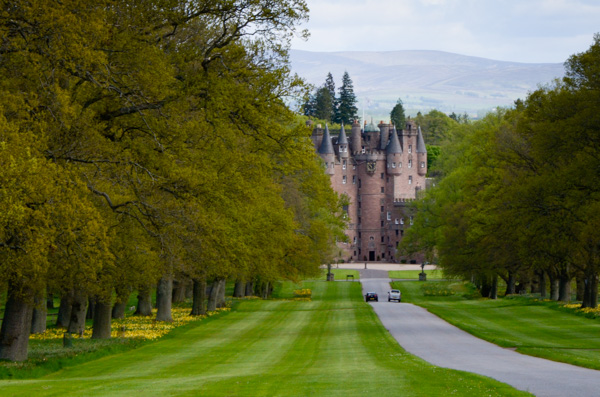 Our excursion for the day was to Glamis (pronounced glahms) Castle. Another group visited the St. Andrews golf course and the university.

Glamis was a story-book castle. It was the childhood home of Queen Elizabeth II's mother and is still the home of the Earl of Strathmore. In fact the Earl was in residence at the time of our visit so some of the property was not accessible.

According to Shakespeare, Macbeth was Thane of Glamis, but in fact Macbeth lived two centuries before there WAS a Glamis estate. Don't go to Shakespeare for your history. He was an artist and entertainer. Good one, too. 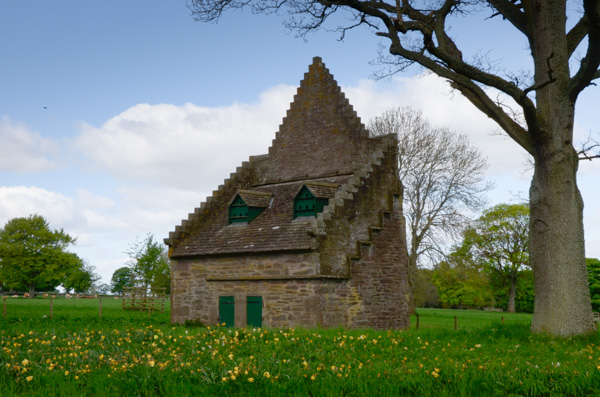 This whimsical dovecote is situated in a field near where our bus stopped to get the picture above. Research since we got home indicates that it was built in the early 17th century and repaired in the 1970s. When it was originally built it was attached to another structure, which was later destroyed. 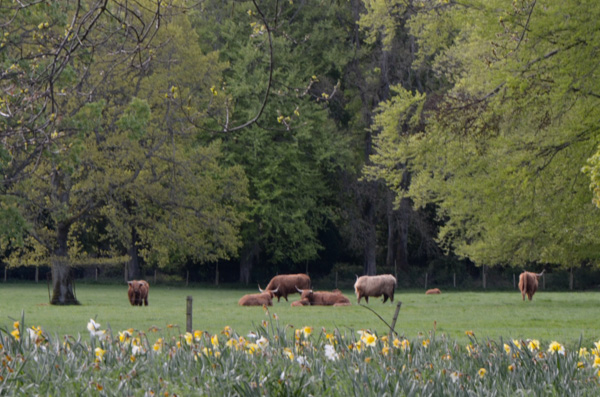 The estate is home to numerous Highland cattle. Maintaining an estate as a working farm is the only way to avoid death duties that would eventually cause it to be subdivided and sold.

One of my cousins, who lived in New Hampshire at the time, had a hobby farm with, among other critters, a couple of Highland cattle. They are very cute up close. 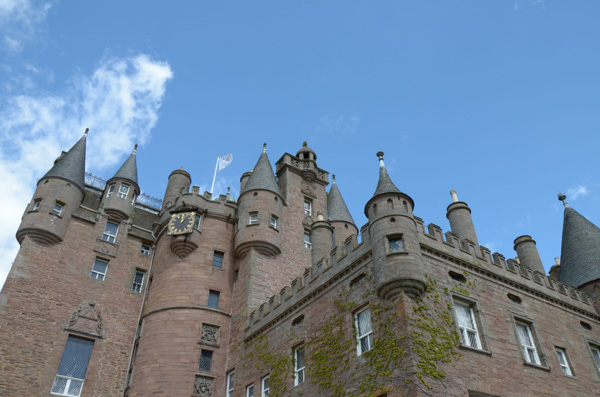 These battlements are among the oldest part of the castle and are above the main "family" entrance. The original structure was not this tall, however. The guide said that when she was a young girl the future Queen Mother and her cousins would climb onto the battlements and (essentially) throw water balloons at arriving guests.

As privileged tourists, we begin our tour at the family entrance rather than with the hoi polloi out back. Our guide was impressed. Another privilege was that we could take photos inside as long as we didn't use a flash and as long as none of the other tour groups could see us using our cameras.

The flag indicates that the earl is in residence. 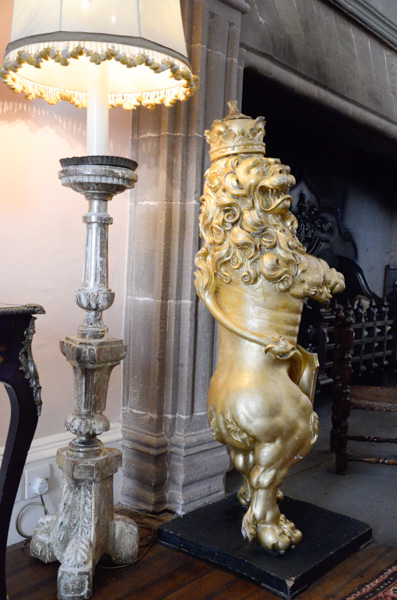 The original family name of the Earls of Strathmore and Kinghorne is Lyon and there were many depictions of lions in and around the castle.

The Lyons came to Glamis in the 14th century. They were designated barons in the in the 15th century and earls in the 17th century.

In the 18th century the 9th Earl, strapped for cash, married an heiress. Her father's will stipulated that her husband would need to assume her name: Bowes. It took an act of Parliament, but he needed the money. Since that time the family name has been Bowes-Lyon. (You didn't think that the Downton Abbey plot was fiction, did you?)

The property was first "developed" as a royal hunting lodge in the 10th or 11th centuries. King Malcolm II is said to have died there in 1034 – certainly not killed by Macbeth, who may have been his grandson (or not). 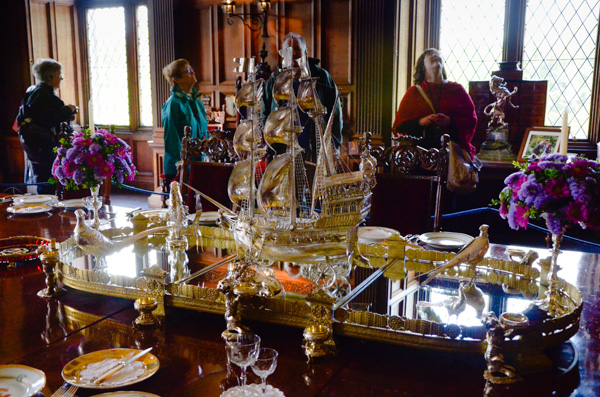 Yes, this dining hall is actually used by the family for large parties. I forget how many the table could seat at its maximum extension, but it was a bunch.

The large plateau holds a silver galleon that was a wedding gift to one of the earls from his tenants. 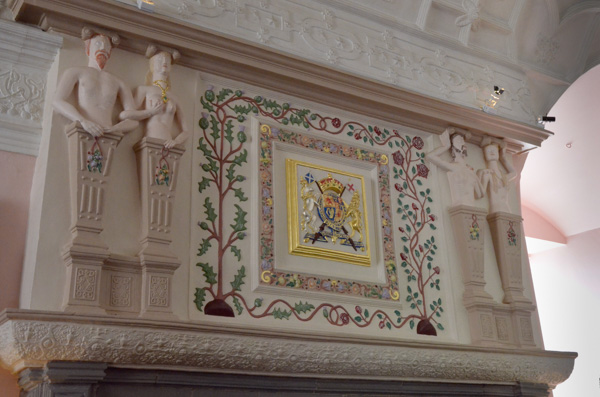 This room is in one of the older parts of the castle. The mantle decoration, with its Adam and Eve iconography, was my favorite of the many that we saw.

I'm sure we were told when it was done, but I don't remember. My guess is that it was at the time of the union of the crowns of Scotland and England during the reign of James I of England (James VI of Scotland) in the 17th century. The Scottish Thistle on the left and the English Rose on the right intertwine. The was also the time that the Irish harp was first included on the English coat of arms to signify the United Kingdom. 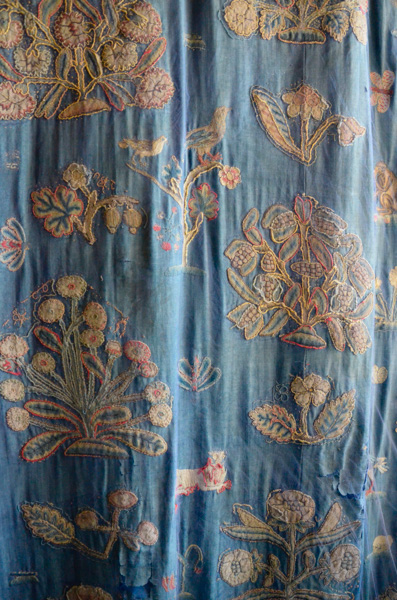 This segment of embroidery was done some hundreds of years ago by one of the countesses. (I have a nagging thought that it was 17th century.) The embroidered hanging covered the walls of an entire small room. The guide said that it took about 10 years. Based on my own needlework experience that was pretty quick stitching for the size and detail of the work.

Curators believe the hangings originally decorated a bed. The colors and condition were amazing for their age – even for this particular section, which is getting too much light from a nearby window and will continue to fade. (It was the only spot that had enough light for a non-flash picture.)

I always resolve to take better notes while we're on a trip, but I never do. We saw so many things (if this is Wednesday, it must be Dublin) that I got places, people and dates confused. And, mirabile dictu, Google hasn't yet indexed any information about ancient embroidery in an obscure room of Glamis castle! It will now, I suppose, but it won't help me. 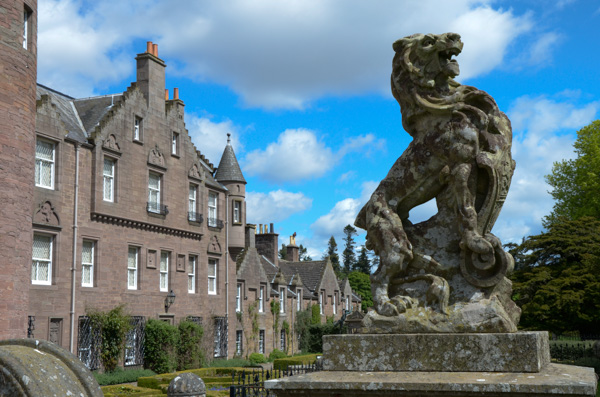 Modifications and additions over the years have both expanded the living space and made it more livable.

The family quarters are the result of "modern" expansions in the 17th and 18th centuries. 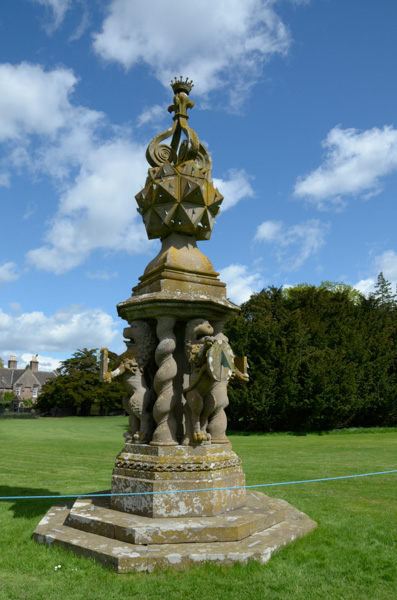 The late 17th century sundial is a listed structure in its own right.

It would be easy to make an entire web page of pictures of this. Each of the lions holds a dial and each of the "pineapple" facets at the top has a dial. According to information at the above link there are 84 time-recording faces. 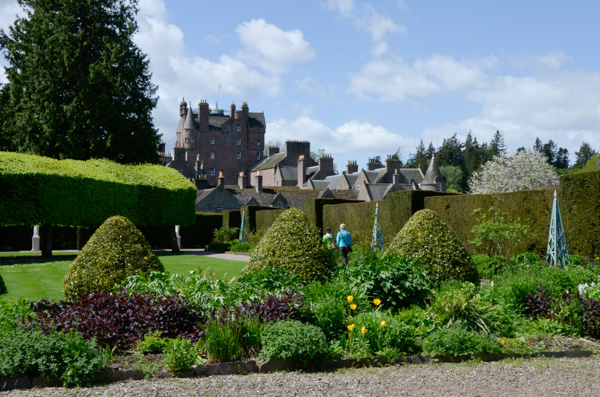 A view of the castle from the "Italian" garden. It was laid out in the early 20th century. We didn't have enough time to really visit the grounds, but they are among the significant Scottish gardens.

I'm still learning to use my new camera and I've been struggling with focus. Many of my flower pictures were experiments in depth of field. This one almost worked. The background is just what I wanted, but unfortunately I didn't get the entire flower sharply. 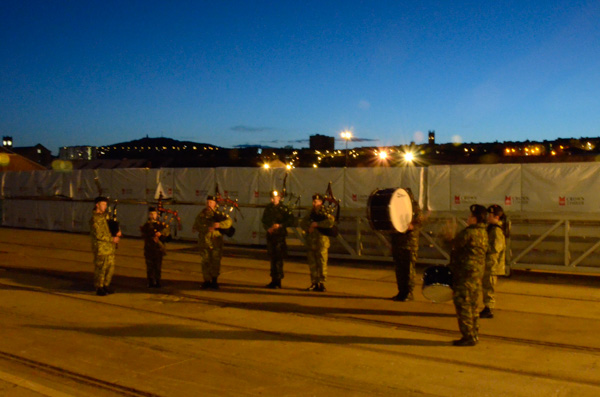 One of my favorite incidents of the entire trip happened in Dundee. Late at night after we were already in bed, Jim heard some "odd noises." Our room was alongside the quay and when I looked out I could see it was a pipe band.

I quickly threw a robe over my jammies, grabbed my camera, and headed for the nearest deck.

Nobody claimed credit for arranging this send-off and it wasn't even announced until later, but they were terrific. They continued to play as the boat pulled away from the dock. There were few dry eyes on deck that night. Even the ship's staff came out.

We were off to Edinburgh.