After a day at sea we awoke the following morning cruising into the harbor at Aberdeen. We were delighted that most of our stay in Aberdeen would be in the countryside. Although there was an opportunity to walk around the city for a short time, we decided that we would save that for next time. 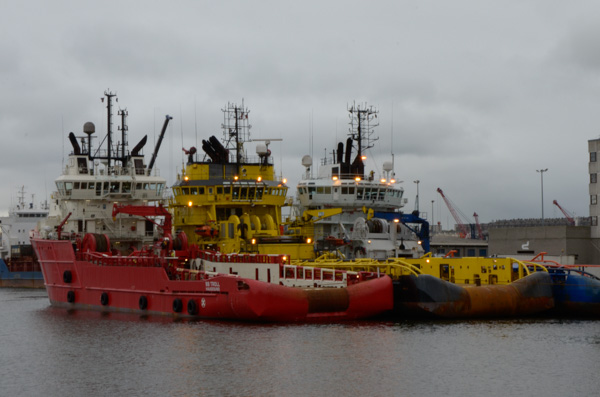 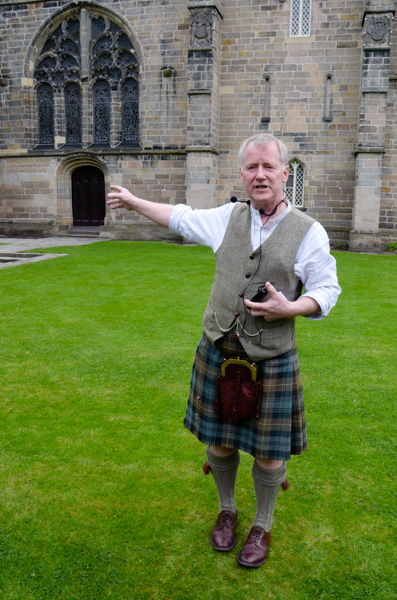 The first stop on our tour of Aberdeen was the University of Aberdeen. It was formed, as King's College, in 1495.

I was confused by the terminology of "old" versus "new" Aberdeen. There were two independent burghs until the mid-nineteenth century.There is more detail at the Aberdeen link above.

Our guide discussed the traditional Scottish kilt. The kilt was the dress of the highlands and other Scots would not have been caught dead in one. That has changed as the kilt has developed into a de facto national symbol.

The original "great kilt" was made of a single piece of fabric (the "plaid"). Check a description of putting it on. Yikes! Our guide is wearing a modern tailored kilt developed in the 18th century for the convenience of British army units.

Modern usage calls the design "plaid," but "tartan" is the proper term.

The top of Aberdeen Tower represents the royal crown of Scotland. The arches indicate a closed or "imperial" crown, which was pretty audacious for the Scottish monarch. We will see this design again in Edinburgh at St. Giles.

Grey granite is the typical building material for Aberdeen, and gives it the nickname of "The Granite City." 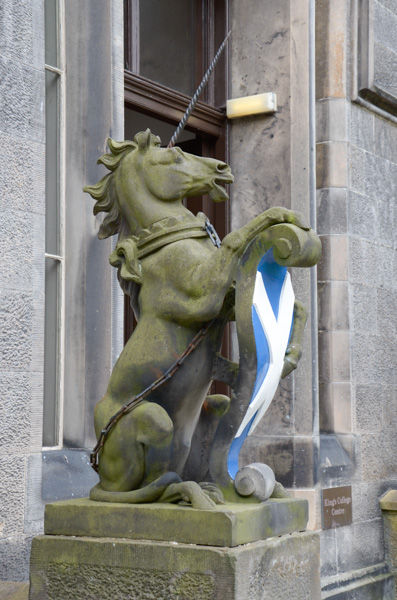 The unicorn is one of the symbols of Scotland. It is always shown chained to indicate that it is a dangerous animal and not to be trifled with. Some depictions show a broken chain. The unicorn here is shown with the saltire or St. Andrew's cross, which is the flag of Scotland.

Our guide said that the unicorn's horn had gone missing for many years on account of a student prank until one day an anonymous package arrived containing the horn. Someone's guilty conscience prompted its return. 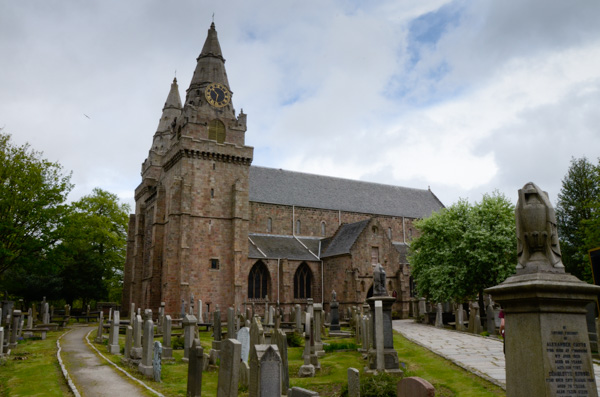 Our next stop was St. Machar's Church. St. Machar was a traditional companion of St. Columba at Iona. The current church is only a portion of the original building. It dates to the 16th century. 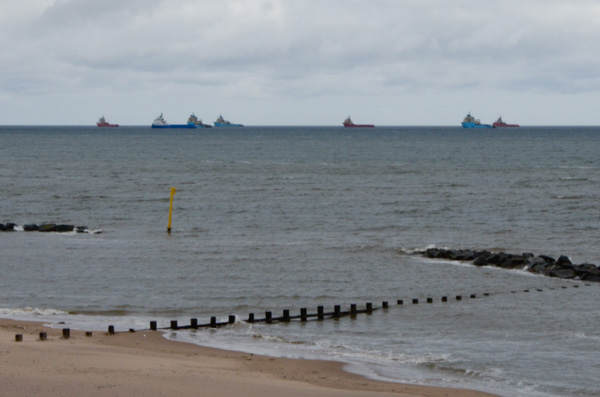 As mentioned above, Aberdeen is a major supply base for the North Sea oil fields (opens in new tab). The income from these fields has been one of the forces behind an increased drive for Scottish independence from Great Britain.

Everywhere you looked out to sea there were ships coming or going from the oil fields.

I wasn't aware that there were beaches in Scotland, but we visited this one in Aberdeen. It even has something like a boardwalk with carnival rides and snack bars. Didn't see any salt water taffy or corn dogs, though. I can't imagine that the water ever gets very warm either. 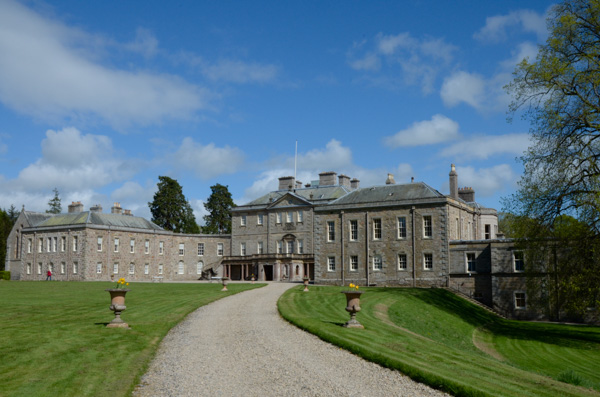 In the afternoon we headed into the Scottish countryside. Our first stop was Haddo House, designed by William Adam in the early 18th century. The Gordon family has lived on the property for over 500 years.

The Gordons were originally baronets then earls and are now marquesses. That's some social climbing.

There is an extensive art collection in the house including a series of 85 watercolors of every castle in the area.

Not every mansion has a game larder, but this one does!

Until the mid-19th century only the landed gentry were allowed to take game. Poaching was a serious crime. 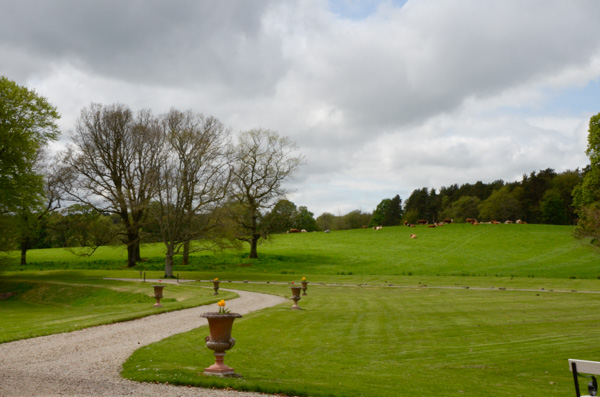 The grounds of the house were lovely. Most of the remaining large estates are farmed because that is the only way to avoid huge death duties. Working farms are exempt.

Few "lords of the manor" did their own farming. They leased the land to others and lived off the rents.

After leaving Haddo House we traveled to the Glen Garioch (pronounced something like GlenGarry) to tour their distillery and taste more Scotch whisky. 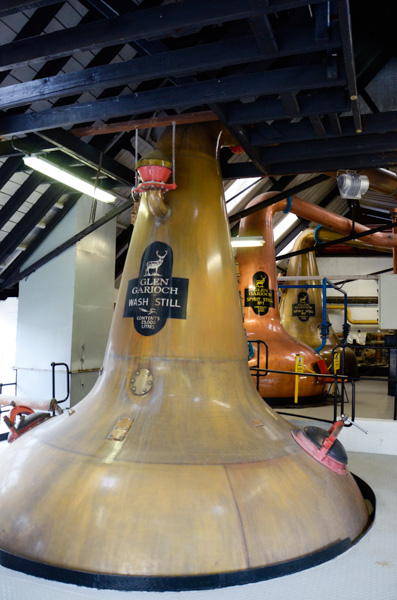 The traditional process of making whisky entails purchasing the barley directly from the farmer, malting it on site, drying or smoking the malted barley,  grinding it, adding water and yeast to ferment the grain and then distilling the product of fermentation.

Most modern distillers, including this one, now purchase the barley after it has already been malted and dried. Furthermore the yeast is standardized and pre-packaged. Purists deplore these shortcuts since it takes away much of the individuality of the resulting spirit, but it makes things easier and more economical for the producers.

At this distillery there are three fermentation cycles and the resulting wort is triple distilled in the stills shown here.

Click for a more complete description of the process. 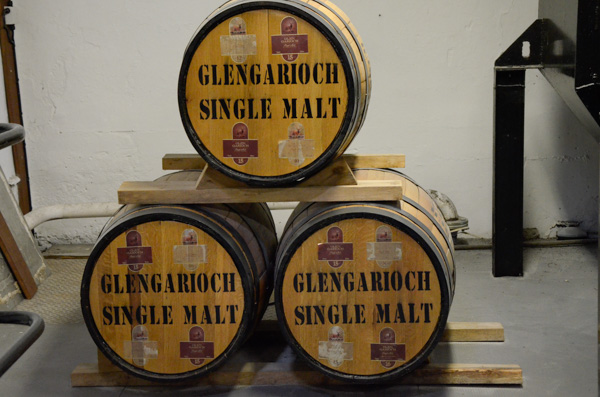 After distilling, the whisky is barrel-aged. The barrels, usually old sherry or bourbon barrels, have a huge effect on the resulting flavor of the whisky.

The amount of aging varies, but it is a minimum of three years, typically much more.

We enjoyed our tour and the tasting, but we're still sticking with Jack Daniels. Speaking of which, we got a great explanation of how to remember the appropriate spelling of "whisky" (Scotch) and "whiskey" (Bourbon, et al.). The Scots, being exemplars of frugality, would never squander an extra letter!

After our tour of the Aberdeen area, we were off to Dundee.