As mentioned in the Belfast page, St. Columba left Ireland in the 6th century and settled in Iona. It is impossible to tease out history from legend even though the earliest written accounts of his life date to only a century after his death. The information at the link agrees with what we were told on our trip. 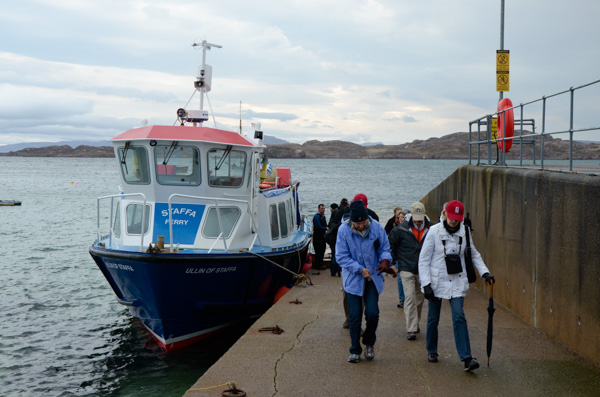 Rather than take the Zodiacs we used this larger tender for the ride to Iona. It took everyone on one trip.

That afternoon the wind picked up and we were unable to use the tender, putting our visit to Staffa in jeopardy. 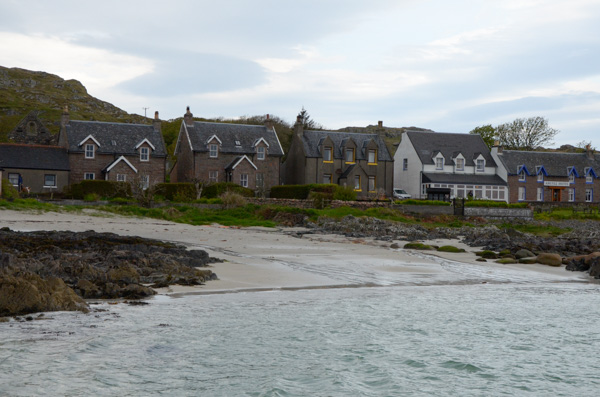 The "main street" of the village greeted us as we climbed off the tender. 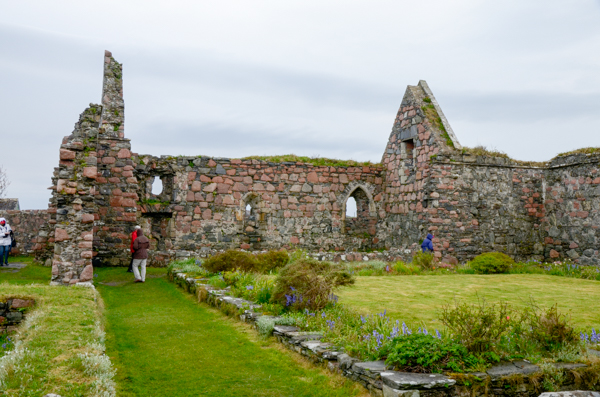 The first stop on our tour was the "nunnery," or the ruins of a 13th century convent. The convent was destroyed during the Reformation. The ruins were restored in the 20th century and turned into a garden. 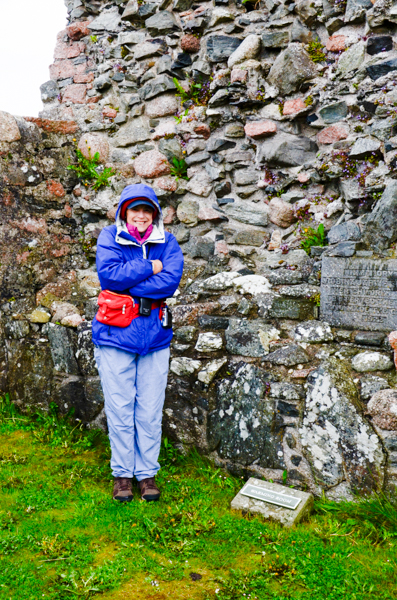 Back in the day the convent dormitories were not heated. This particular room is denoted the "Warming Room" and would have been the only heated space (we were told) in the facility.

Nowadays it is open to the elements, of course, and on this brisk windy day it may have been warmER, but it wasn't really warmING!

My souvenir of Iona is a nice pair of hand-knitted woolen gloves! 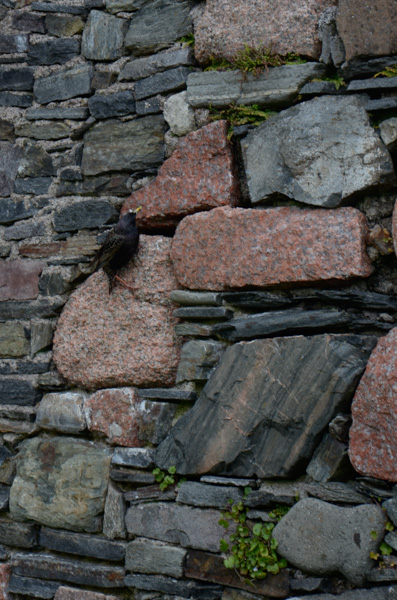 I tried throughout our trip to get pictures of the various seabirds with little success.

At least I got a picture of this starling. Its nest is in the crevice of the rocks. We are constantly trying to block off the various crevices in our house where the starlings attempt to take up residence: dryer vents, exhaust vents, the gas grill, gutters, etc.

Seeing the bird in its native habitat made me appreciate its ability to make a home in the tiniest most inhospitable place.

Not that I want it taking up residence in our house! 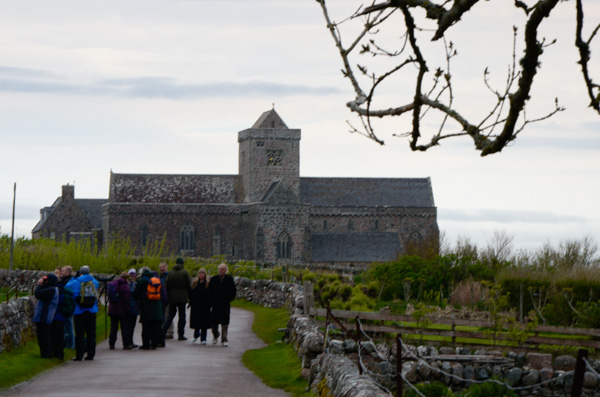 St. Columba and his followers lived in a collection of huts around a modest place of worship. Monks constructed an abbey in the 13th century on the site of Columba's original church. Monasteries disbanded during the Scottish Reformation in the 16th century and the abbey deteriorated. The current structure was built in the early 20th century.

Iona is now home of the Iona Community. The pastor of my church and his wife are planning a retreat there later this year. We use a number of the worship materials produced by the community in our church.

The Celtic cross is distinguished by the circular shape or nimbus at the intersection of the standard and arms of the cross. I've been taught all kinds of things about the symbolism of the form, but we were told at Iona that it was developed to add stability to these stone carvings.

As can be seen here, the arms had a tendency to break off over the years.

At one time there were hundreds of similar crosses scattered across the island. There are still many, both ancient and modern. 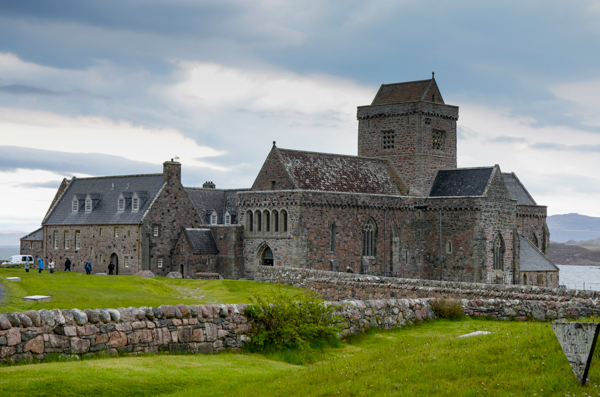 A closer view of the abbey. The church is nearest with the cloisters on the far side. 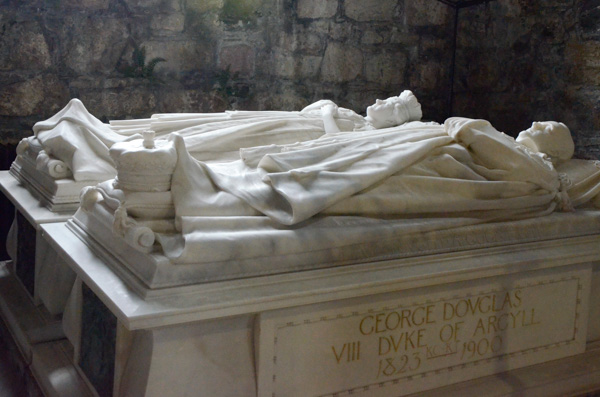 The Duke of Argyll has jurisdiction over the island. In the late 19th century the 8th duke gave the remains of all the buildings to the Church of Scotland. He is not buried here, but his wife is.

There are also said to be several kings of Scotland who are buried on the island – including Macbeth, who was NOT accurately depicted by Shakespeare. 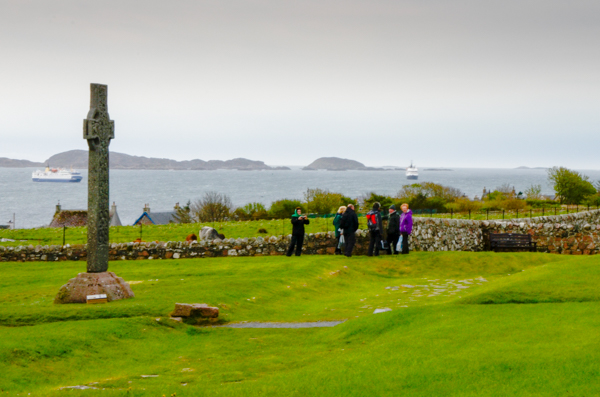 The oldest existing feature that we saw on Iona is this ancient roadbed, which once led from the port where we landed to the old abbey. The walls that now interrupt the road are much newer.

Our ship can be seen offshore to the right. There was also another ship that had visited the island. 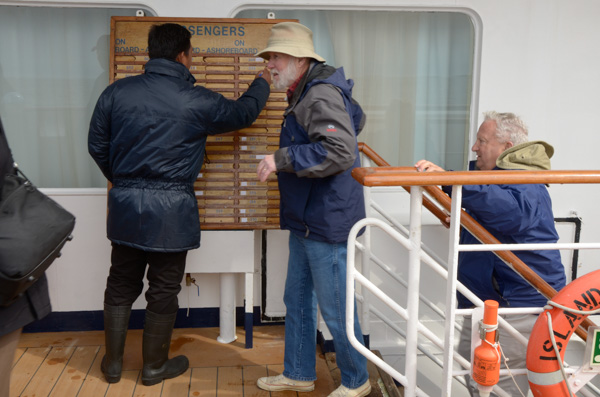 Jim checking in after our time on Iona.

The ship proceeded toward the island of Staffa where we planned to visit Fingal's Cave.

While we were en route, Daniel Albright gave a presentation on how this weirdly wonderful cavern inspired musician Felix Mendelssohn and playwright and poet August Strindberg.

Imagine our disappointment when, for a while, it appeared that the weather would keep us from landing! 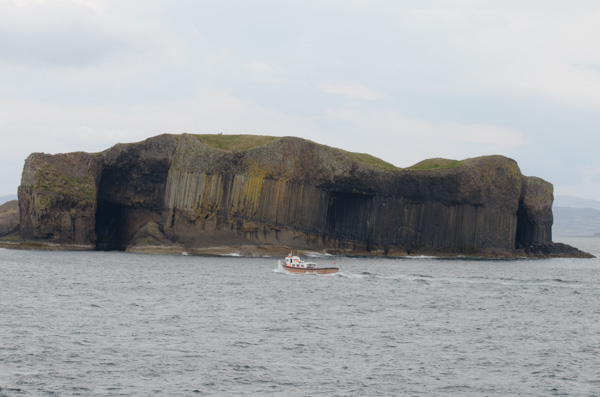 Windy conditions prevented the tender from connecting to the marina deck to load passengers. The captain tried several locations around the island searching for a calmer location.

The actual Fingal's Cave is to the right in this picture. Any place this striking would have to create a legend. Check out the link for a brief overview of both legend and geology. 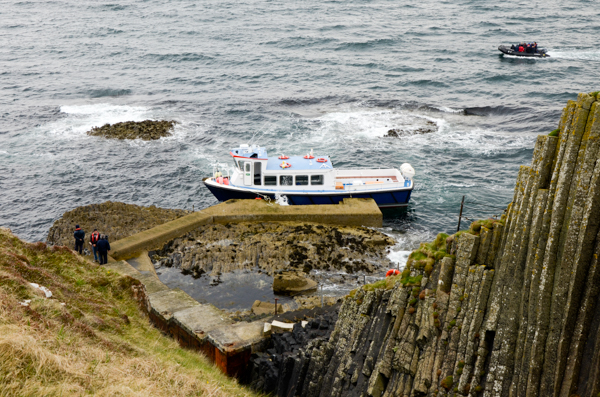 Our expedition staff were undeterred by the weather. They launched the Zodiacs and took all ashore who wanted to go. The tender was waiting to take our local guides back to Iona.

Once on the island we chose either to visit the cave or the nesting area of the island's puffins.

I really wanted to see the puffins, so I chose the birds first. Bad decision! 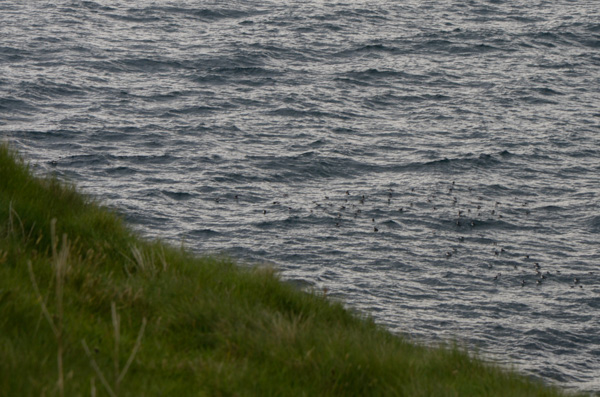 This is as close as I got to the puffins! (Trust me, the dots in the water are puffins.)

It turned out that the birds only come ashore much later in the day. Since I really did want to see the cave, I could only hang around the rookery so long.

The folks who had gone to the cave first got to the birds just as they were coming ashore to their nests. Oh well. I heard they were really cute. 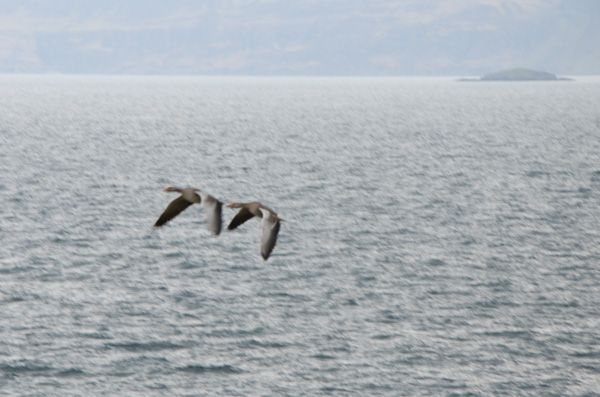 As the consolation prize for missing the puffins, I did get a half-way decent picture of these greylag geese. 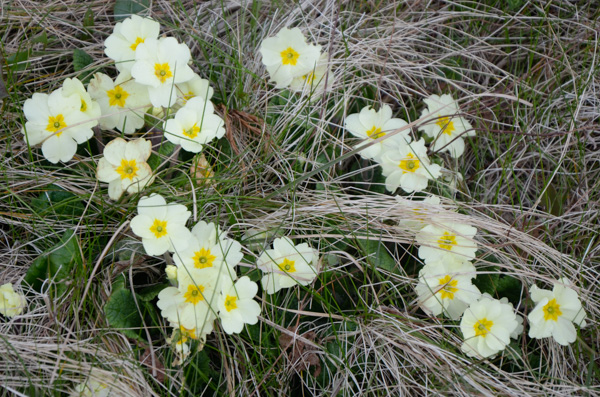 Otherwise I had to be content with more stationary wildlife.

These charmers are primrose. They are associated with fairies. 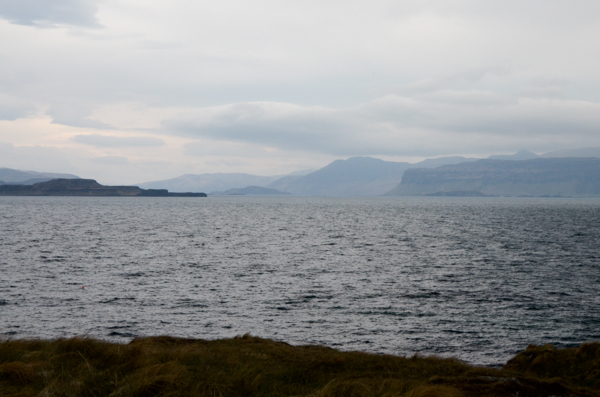 The view north of Staffa to the mainland and other islands. 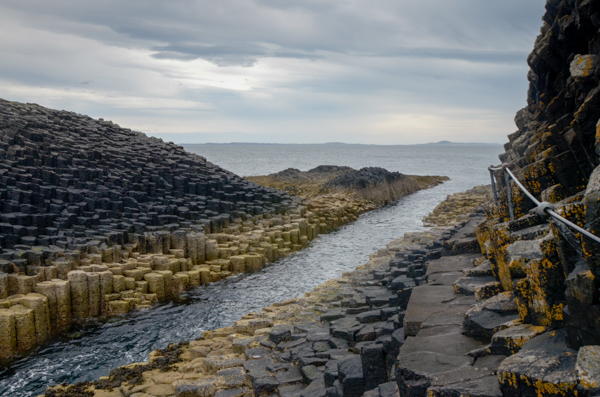 The way to Fingal's Cave is along basalt columns. The stones have been covered with a non-slip solution and there is a handrail for much of the way, but it is still treacherous.

One of our number slipped and fell in an area where there was no rail and got scraped up pretty badly. A quick visit to the ship's doctor got him patched up and there were no broken bones. 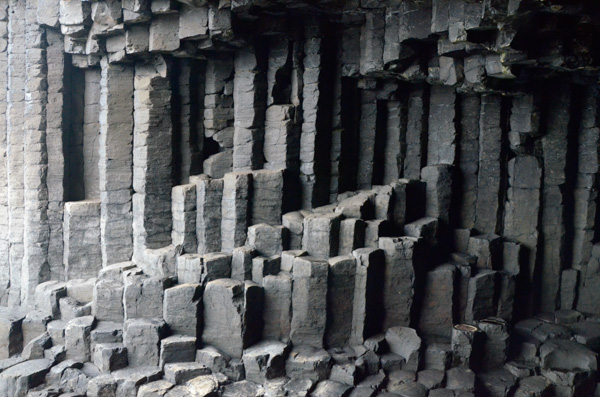 These columns are at the mouth of the cave. 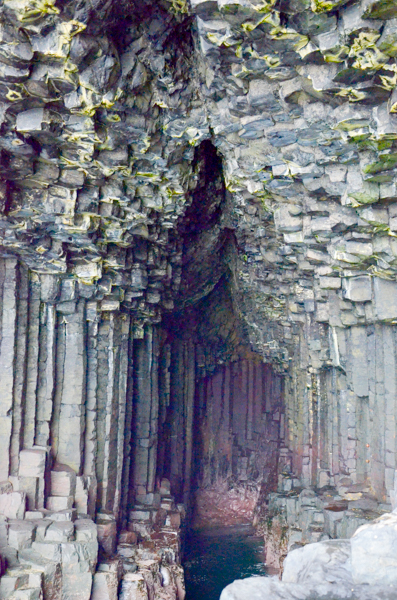 It is easy to see why the cave has inspired so many artists. The photo cannot, of course, include the sound of the sea within the cavern.

This picture was taken from the ledge high above the water not from the water's edge. 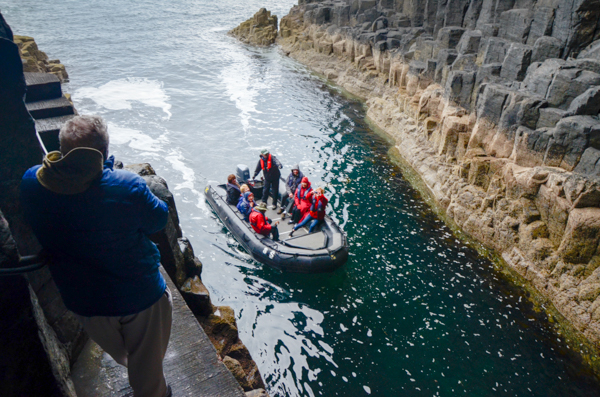 As the Zodiacs returned to the ship, they each made a visit to the cave. It was an awesome sight to come into the towering dark cavern on the swells of the ocean.

After Staffa the ship sailed north through the islands for our next destination, the garden of Inverewe.