As I mentioned earlier, we had thought that peace had been achieved in Northern Ireland with the acceptance of the 1998 Good Friday Agreement and were dismayed to find out that this is not the case. At least the opposing sides aren't lobbing bombs at each other, but there is still plenty of mistrust and tension – even hostility at times.

The morning that we arrived in Belfast, we had a presentation by Dr. Cathy Gormley-Heenan and Dr. Jonny Byrne of the University of Ulster. They spoke of the research they had done on the perspectives and attitudes about the so-called peace walls both among the general population and those who live in the immediate neighborhoods. The bottom line is that the people most directly affected are still afraid of violence in their neighborhoods. Oddly, many view the walls as a tourist attraction and thus an economic benefit. Well, perhaps that's not so odd – we toured them didn't we?

After the presentation we boarded buses for a tour of Belfast. We thought it peculiar that the guides for the Belfast tours were the same ones we had in Dublin. Later we asked why we didn't have local guides. The answer was that none were available. Hmm. Unfortunately the guides' and bus drivers' lack of familiarity with the city resulted in our getting locked up in traffic at one point and getting lost at another. We didn't get to see all of the sights listed in the program. All very strange. Perhaps the paranoia is contagious?

In Northern Ireland the "republicans" are those in favor of independence from the United Kingdom and association with the Republic of Ireland; the "unionists" (or loyalists) are those in favor of remaining part of the United Kingdom. Republican areas generally have signs in Irish as well as English and many homes and businesses fly the Republic of Ireland flag. Unionist areas only have English signs and the Union Jack is prominently displayed.

Although republicans are usually Catholic and unionists are usually Protestant, we were told that it would be an over-simplification to view the divisions as sectarian. 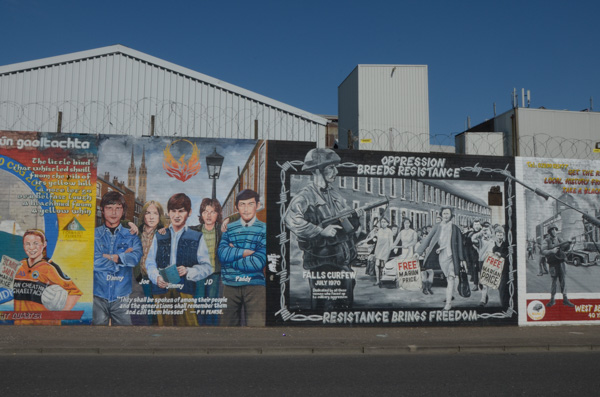 The republican side of one of the walls.

One mural commemorates five young members of the Provisional IRA Belfast Brigade who died in the 1970s from bombs and bullets.

Another defends Marian Price, who had been imprisoned for her role in a London bombing during the 1970s. She was pardoned, but later jailed amidst controversy in 2011 for political activity. (She was released again shortly after our trip but is still dogged by controversy.) 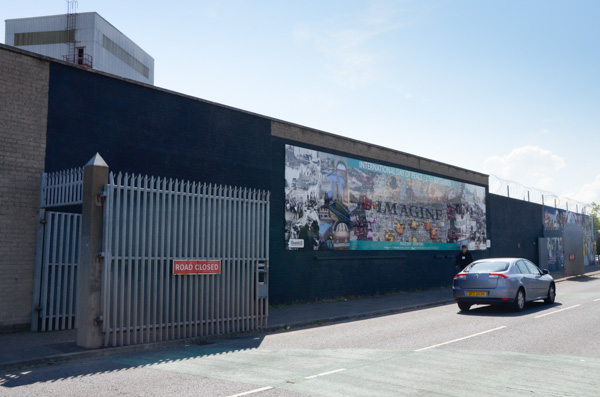 One of the walls from the unionist side. The mural celebrates the International Day of Peace.

Some of the walls have gates that are opened during the day to allow traffic to pass between neighborhoods. 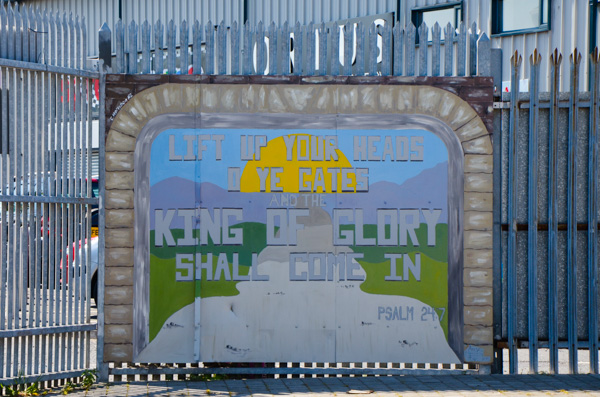 Nearby is another mural with a reference from the Bible: "Lift up your heads, O ye gates, and the King of Glory shall come in." I don't know if the irony was deliberate, buy I suspect it was.

Another nearby mural celebrates Shankill Road residents (predominantly unionist) as "Proud, Defiant, Welcoming." I struggled a bit with that combination of qualities. 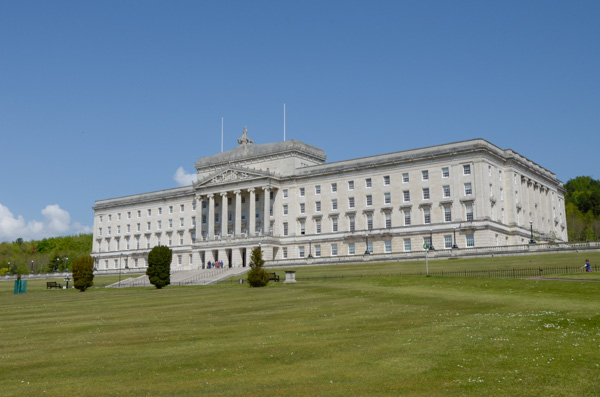 After a disturbing time in a divided Belfast, our bus climbed up to "Stormont" the home of the Northern Ireland Assembly. It seemed a bit unreal after what we had just seen.

The Assembly is housed in this structure, purpose-built in the 1920s for the legislature. Other buildings on the estate house the executive offices. 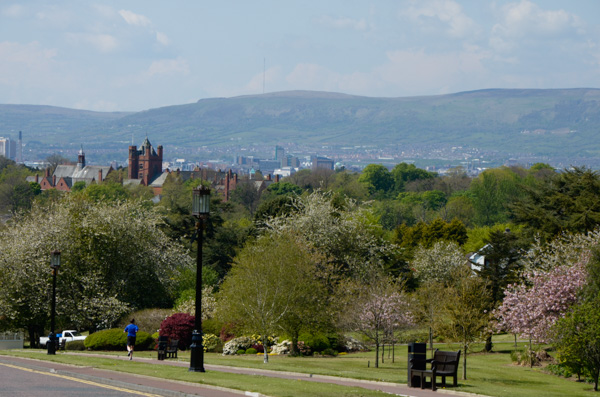 From the estate we could look over the city in the valley.

We then returned to the ship for lunch and our next speaker: Basil McCrea (opens in new tab), a member of the Legislative Assembly. He spoke about his plans to form a new political party. He was an entertaining speaker. His party didn't survive.

After Mr. McCrea's talk we were back on the buses for a very short trip across the docks to the new (opened in 2012) Titanic Museum. it is located in the dockyard where the Titanic was built. The building and its exhibits are interesting. We learned about the time and place that produced this ship.

It was jam-packed. Not being fond of crowds I found it overwhelming and only made it about half-way through before bolting. The exhibits were arranged chronologically and I'm not sure if the ship was even launched before we left. It certainly hadn't sunk yet! 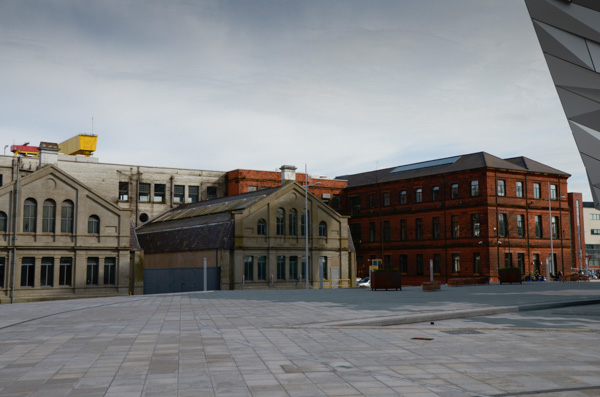 The Titanic was constructed by Harland and Wolff. These buildings were the company headquarters for many years. One of them is the "drawing office" where the ship designers worked. I would have relished a view inside. They are open to the public at certain times.

After the museum we returned to our own ship and bade farewell to Ireland.

The story of the founding of the Iona monastery tells that the church banished St. Columba from Ireland as a penance. He was forbidden to see the land again. He sailed away to the northeast with his companions seeking the closest place that would fulfill the sentence and settled in Iona, our next stop.

We watched the sun set over Ireland – still visible in the distance.