After leaving Fowey, we spent a day crossing the Irish sea to Dublin. Our blustery day at Heligan had been the leading edge of a major storm system so it was a rough trip. Jim isn't bothered by sea-sickness and I was fortified by "the patch" so we did OK.

Our stateroom was in the bow of the ship, however, and no amount of chemistry can alleviate the booming of the sea through the scuppers, the rattling of the hangers in the closet, or the miscellaneous creaks and groans of a ship in heavy seas. Not to mention the occasional object falling over. We didn't get a lot of sleep on the way to Dublin. At least that was our last experience with a "bucky boat."

During the day at sea we listened to lectures from our other traveling professors: Alastair Minnis of Yale and Daniel Albright of Harvard. Alastair spoke on how poets and poetry reflected (and still reflect) the struggle for Irish independence. Daniel gave us a selection of poems associated with the sea. 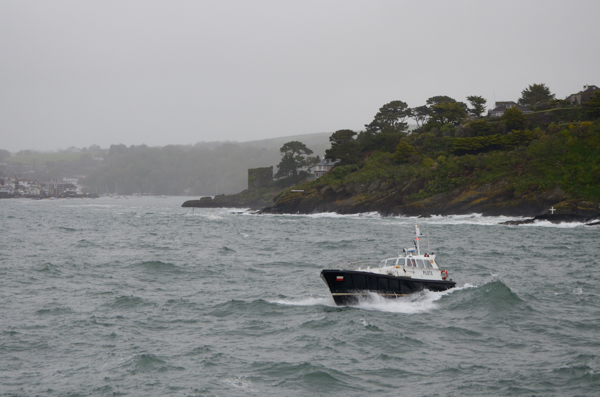 As we left Fowey harbor the pilot boat had a rough time getting the pilot off our ship. I didn't have the nerve to go back to the "marina deck" to see exactly how they made the transfer. It was scary enough watching the little boat plunging through the waves.

And this was before we hit open water and our ship began its own plunging! 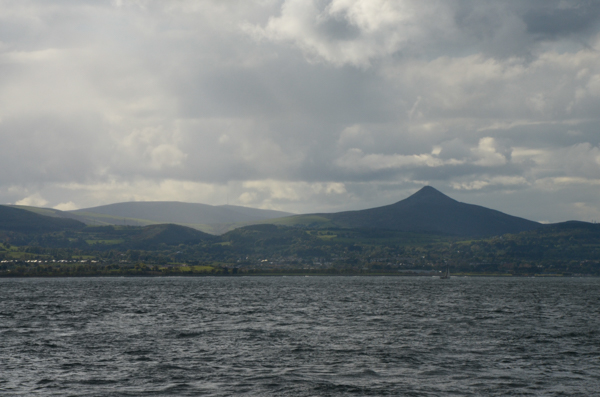 In the late afternoon of the following day we saw the Irish coast for the first time. By this time the storm has passed and it is clearing.

We had signed up for an excursion that would have taken us into the Irish countryside to Newgrange, but not enough people chose that option and it was cancelled. We were disappointed that this was the most we saw of Ireland outside of the cities of Dublin and Belfast.

The River Liffey flows through Dublin. Unlike the other cities we visited, we tied up to a quay in the heart of town. Elsewhere we were in "the docks," which was usually a secured area far away from city sights.

We were not the only visiting ship.

Dublin has redeveloped this former warehouse district with modern offices. There are still tracks from gantry cranes in the pavement alongside the quay to tell its industrial past. 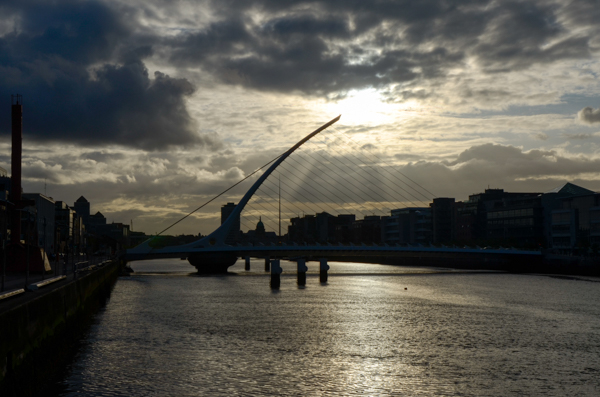 The bridge beyond our mooring place is designed to represent a harp, the symbol of the Republic of Ireland.

There was an Irish pub crawl, complete with traditional music, scheduled for this evening. As much as I was attracted by the music, jet lag and lack of sleep the previous night discouraged us from participating. We heard it was great fun. As for us, we slept like babies. 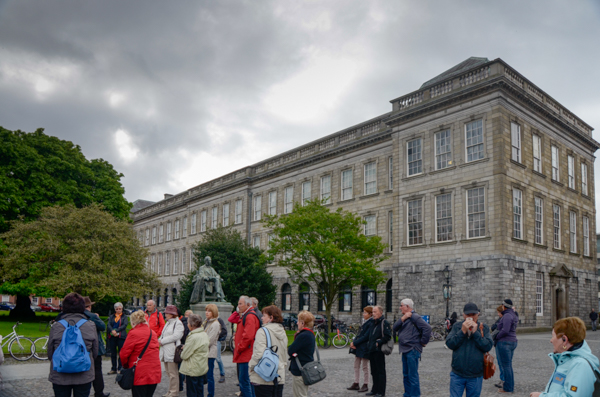 The next morning we divided into two groups to tour Dublin. Both groups visited the same places, but in different sequence.

We started the day at Trinity University where we were to see the Book of Kells, housed in the "old library," the building in the background.

As it turned out we were lucky to get there early because the other group ran into rowdy crowds of schoolchildren and were unable to get a good look at the displays. 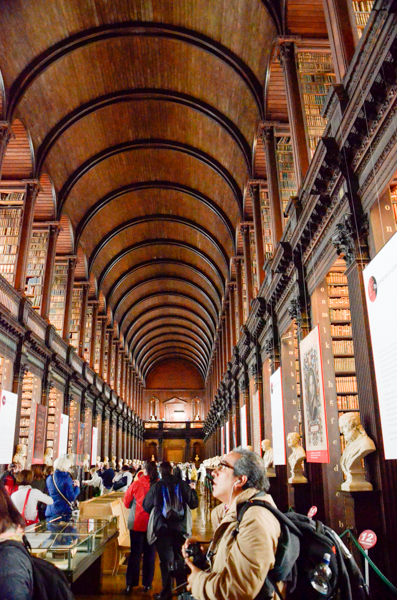 Needless to say pictures were not allowed of the Book of Kells, but they were allowed (without flash) in this section of the library: the long room.

There was an interesting display on early bookbinding techniques. 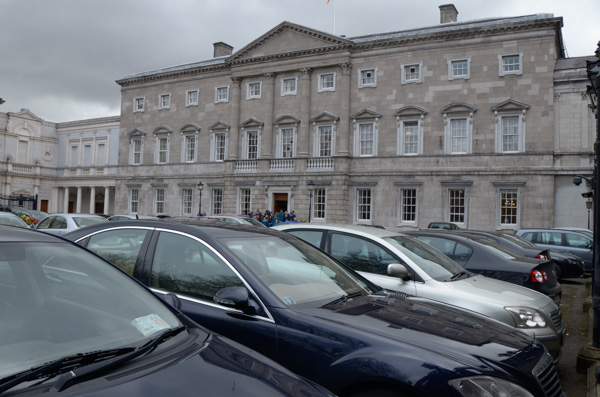 Our next stop was the National Museum located adjacent to Leinster House, shown here, the home of Ireland's parliament.

James FitzGerald, the Earl of Kildare, who later became the first Duke of Leinster, built it as a town residence in the mid-eighteenth century

In the early 19th century the Duke sold the house to the Royal Dublin Society. 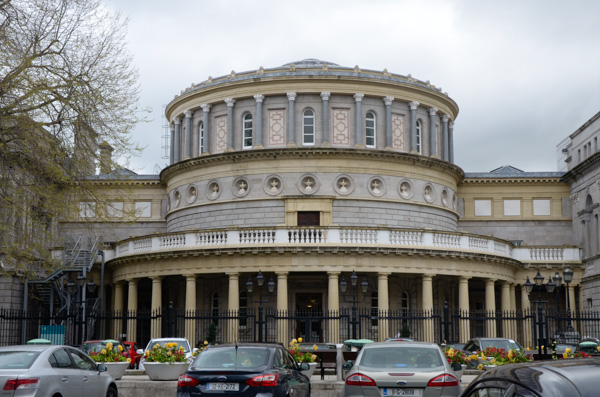 In the late 19th century two wings were added. The one shown contains the National Library of Ireland. An identical one (at least on the outside) was added for the National Museum

The National Museum is actually located in several facilities. The one we visited is dedicated to archeology.

Among the fascinating exhibits were several bog bodies. These remarkably preserved remains appear to have suffered ritual sacrifice.

The building itself was also very interesting. 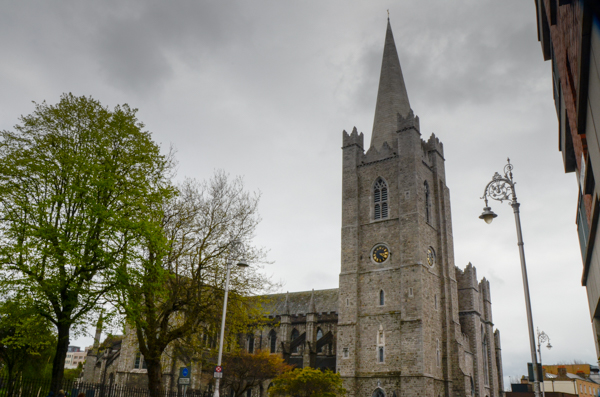 In the afternoon we visited St. Patrick's Cathedral. It is a Church of Ireland (Protestant) facility and is not actually the seat of the bishop.

I will not attempt to go into the political or religious situation of the Republic of Ireland because it is both extraordinarily complicated and not part of our program. Nevertheless I was surprised to see that the large fancy churches seemed to be Protestant when the population is largely Catholic.

St. Patrick's church was founded in the 9th century; the current building was erected in the 14th century although it has been much altered. 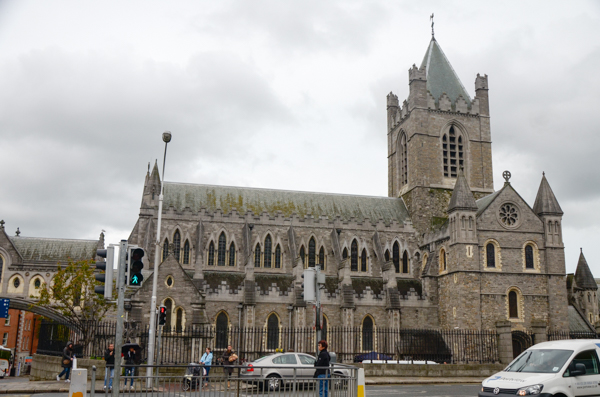 After the visit to St. Patrick's our busload was taken to the major shopping section for some free time. Not being shoppers, we set out on foot for downtown to see what we could find.

Right down the street from St. Patrick's is Christ Church Cathedral, which really is the seat of the bishop. The church was founded in the 11th century at the time of the Viking rule in Dublin. The building was rebuilt in the 19th century. 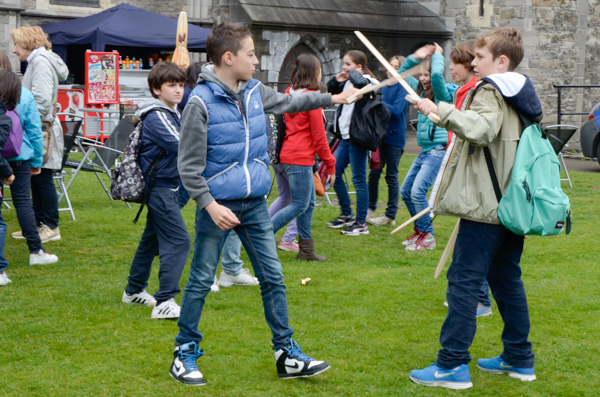 There appeared to be several large groups of schoolchildren visiting the cathedral. We don't know what the occasion was, but many of the youngsters had wooden swords and weren't afraid to use them either. 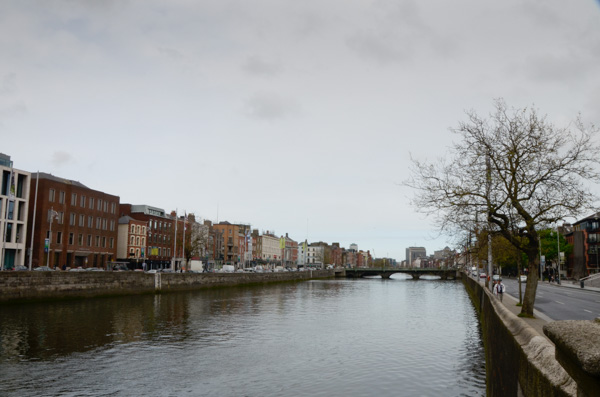 We walked down to the Liffey and followed it to the ship. It was nice to be within walking distance of the heart of the city.

We didn't have the time to get to know much about Dublin or begin to appreciate it as a city. This was a recurring theme in the cities we visited. 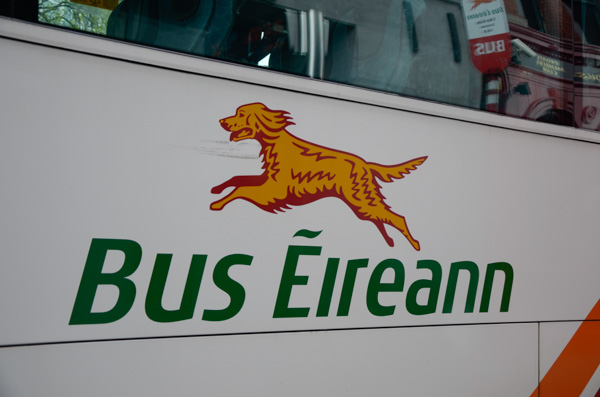 The local bus line. Instead of a Greyhound it has an Irish Setter! Someone had a sense of humor.

The Republic of Ireland (and the Republicans in Northern Ireland) are attempting to revive the Irish language that had been so brutally suppressed over the centuries by the English. I'm not sure how successful this will be, but most signs are in both English and Irish (Gaelige) and we were told that Gaelige is a required subject in school. One of our expedition staff, Mick, was Irish-born although he now lives in Wales. He spoke eloquently on the Irish and Welsh desire to reclaim their cultural heritage, which includes the language. 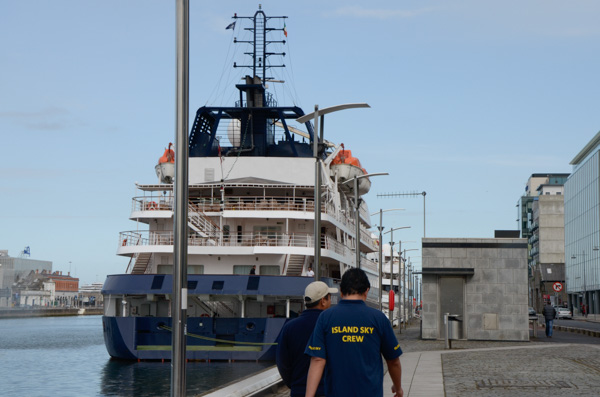 We have made it back to the ship. Some of the crew were glad for the opportunity to go ashore as well.

I was amused by the cat cut-out. I think it is supposed to be a rat-guard, but if it is I doubt it is effective since it doesn't cover the main mooring lines.

Didn't see any rats (or cats) aboard the Island Sky, but that doesn't mean they weren't there.

Whether or not rats were accounted for, passengers were. The staff uses this board to track who was ashore and who had returned.

The crew had a separate board.

Refreshing drinks and warm hand-towels welcomed us on our return. 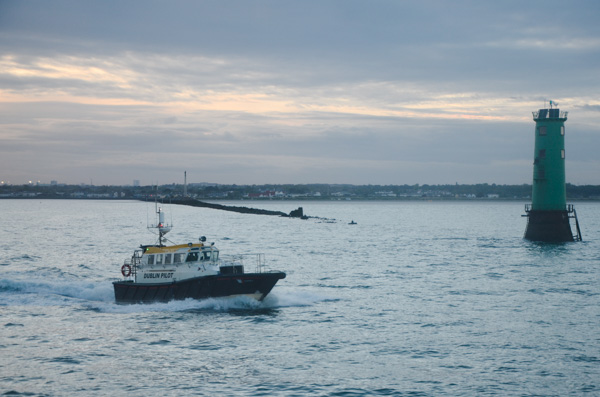 After everyone returned to the ship we had another lecture by our Yale professor, Alastair Minnis. He reviewed The Troubles in Northern Ireland – the time of conflict and violence between the "republicans," who wanted Northern Ireland to become part of the Republic of Ireland, and the "unionists," who wanted to remain part of the UK. As before he used poets and poetry to frame the discussion.

We had thought that this issue had been settled with the Good Friday Agreement. Not true. There may be a truce but peace is still elusive. The effects of Brexit on Northern Ireland and its border with the Republic of Ireland was a primary sticking point in the exit negotiations with the EU.

Afterwards we departed for Belfast accompanied out of the harbor by the pilot boat. The seas were much calmer with only a residual swell from the storm.