Lyon has been the center of the French textile industry for centuries. Check for a brief timeline of the development of the industry. We had visited the Lyon Textile Museum on an earlier visit. Since that time we have been wanting to return to visit a museum called the Maison des Canuts (house of the silk workers). This is the only place in Lyon to see a Jacquard loom in operation.

Several branches of my mother's family had their origin in France and her maiden name was derived from Couturier, which means dressmaker. Unfortunately I've not been able to trace any of the lines to Lyon. 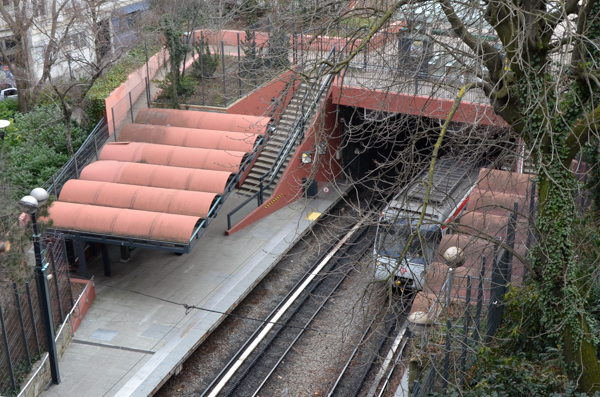 In order to reach the Maison des Canuts we were back onto rails. This time we took "Line C" up to the Croix Rousse (Red Cross) district. (I have not been able to determine why it is named this. It has nothing to do with the relief organization, which is the Croix-Rouge.) This line is a cog or rack railway as it climbs up the steep hill. At one time it was a funicular. It was the quietest and smoothest cog railway we had ever ridden. 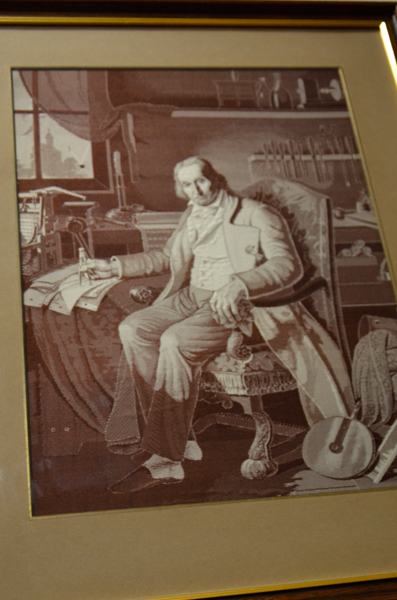 Joseph Marie Jacquard, pictured by a piece of fabric woven on one of his looms, is credited with inventing the loom named after him. (Looking at the Wikipedia discussion at the link indicates that the development of the ultimate device was done with the contribution of many. There is also the best explanation of "dit" names that I have seen.)

Jim and I were both introduced to computers in the days of punched Hollerith cards (do not fold, spindle or mutilate) and we were aware of their origin in weaving. We have wanted for many years to see the specifics of their development.

There were a number of similar woven images of dignitaries on display at the museum. Our guide said that they were popular in their day and were often used as presentation pieces to indicate the capabilities of the industry. Early marketing materials!

An example of fabric produced by a Jacquard loom. The intricate design is produced by lifting selected warp threads (the ones that run the length of the bolt of cloth) so that the appropriate spindles of silk can be used to form the weft threads (the ones that run across the bolt). The weaver uses a treadle to advance through the pattern and has to memorize which spindles are used at each step.

A good weaver could produce 30cm (not quite a foot) of fabric in a 12 hour day!

We were at a disadvantage because the guided tour is given in French! The guide apologized because time allowed only a brief English summary. (We were warned before we bought tickets.) We both know enough about weaving that this wasn't insurmountable, but it would be great someday to arrange a private tour in English. Next trip. 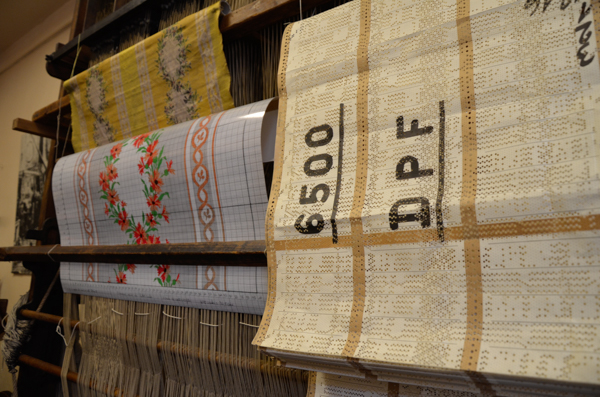 This display shows how the pattern is developed. One iteration of the design is marked onto chart paper (shown on the left). It is then punched into the paper cards. The holes identify which warp threads will be raised for each color of the design. The yellow fabric is the finished product. In this example there are two repeats of the pattern across the weft of the fabric.

The weaver uses the chart as an indication of what colors go where until he memorizes the pattern.

I forgot to ask for an explanation of how material was "ripped out" if the weaver got confused. I expect it is a lot more complicated than when I mess up one of my counted cross-stitch pieces! 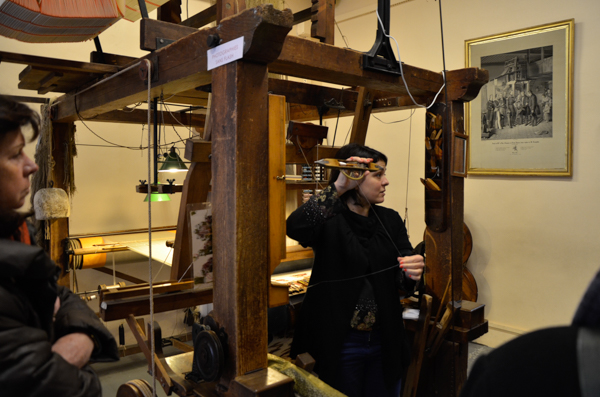 The guide is holding up one of the main spindles used to make the background weave. The spindles used for the pattern are much smaller and lie on the working surface behind her.

She produced a few small bits of the design for us. The output of this demonstration loom is about an inch a month!

The head of the loom is where the cards are fed to drive the pattern production. There are descending lines that attach to each of the warp threads. As the treadle advances the cards, the punched holes guide which lines are selected to raise their corresponding threads.

Again I forgot to ask how long it takes to reset the loom for a new pattern, but I expect it is quite a while!

The pattern runs in a continuous loop.

We saw many machines derived from this design still in use in a Chinese brocade factory. Nowadays they are all automated, but they still use punched cards. 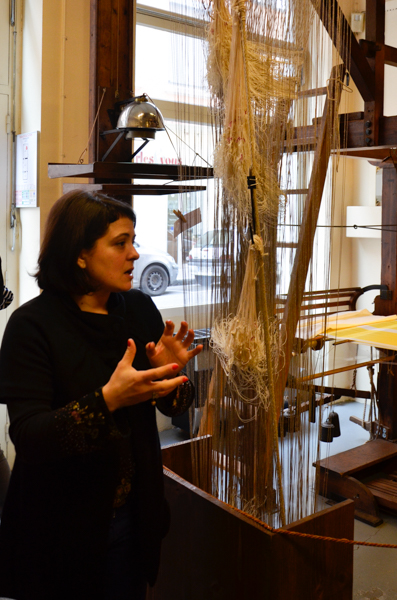 This is an earlier type of loom called a drawloom. The principle is similar with strings attached to warp threads, but instead of punched cards producing the pattern, many strings are tied together in a bundle. A "draw boy" selects the bundles in sequence and pulls them to raise the warp threads. He then hangs up that bundle and moves on to the next. So this rat's nest of strings has an orderly progression – as long as the draw boy picks each bundle in the correct order. Once the pattern is complete, the bundles are released from the hanger and the process starts all over again.

Needless to say this process was unable to produce the same level of design complexity.

Wikipedia has an interesting discussion of looms. 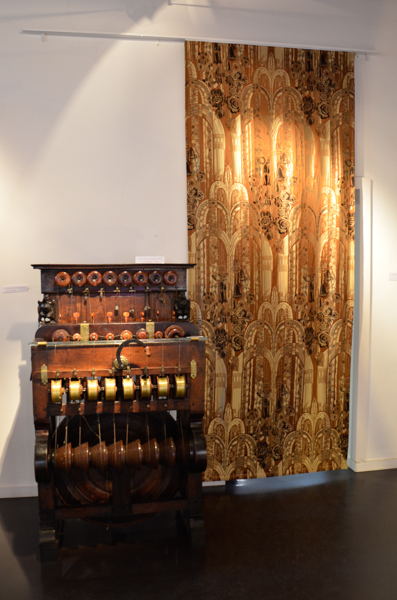 This finely crafted machine produces gold-wrapped threads and winds them onto bobbins. The bobbins produce metallic fabrics like that shown in the doorway.

The only silk cloth produced in Lyon today is fabric used in historical settings. Although at one time France grew its own silkworms and produced its own silk thread, all silk thread is now imported from China. Some of the dying is still done locally depending on the historical need.

The textile industry is still thriving – it has just been turned to other purposes. Lyon is the leading producer in France of medical devices such as specialized fabric used to reinforce arteries. Another focus is to produce fiberglass or composite materials for ship masts.

There is so much more to cover on this topic, including the role of the Lyon weavers in the revolutionary movements of the 18th & 19th centuries. Next trip.

After our tour and a delicious lunch (Lyon is famous for its food) we decided to walk around the district. Our map had several "traboules" noted. We were unable to find the word in our dictionary so we went exploring. This is one that we found.

Later we discovered that the Lyon traboules are famous (who knew?). We had packed most of our below-freezing clothing in the ski pack stored in Geneva and it was too cold for leisurely exploration. We met a British couple at supper that evening in a small bistro who recommended the organized tours offered by the tourist bureau. Next trip. 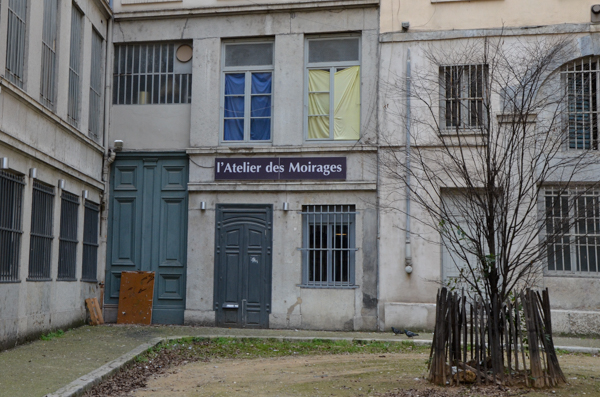 Another traboule on our map led to this square. It had been part of a monastery in the 18th century, but according to a plaque at the site, the monks, short on cash, rented the space to an Englishman who developed a method to produce "moiré" fabric. The technique was kept secret for many years. (I've not been able to find anyf independent corroboration of this.)

Another nearby plaque, plus a discussion with one of the taxi drivers from our Paul Bocuse expedition, indicated that Lyon had a large role in the French resistance movement of WWII. The hidden traboules and courts helped undercover movement. Something more for the next trip. 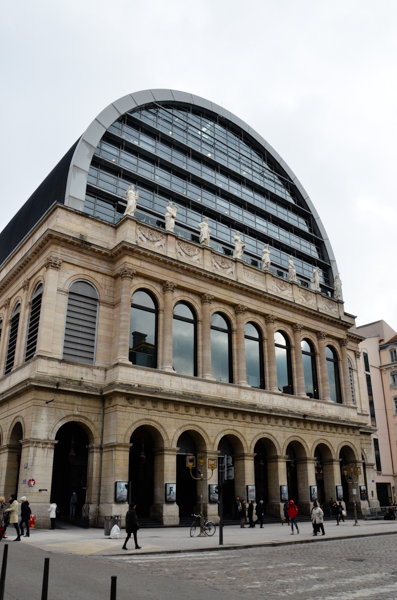 We had seen this great barrel vault from Fourvière the previous day and determined to find it. The building turns out to be the Lyon National Opera House. The facade is from 1831, but almost all the interior was gutted and rebulit.

We're not big opera fans, but there was a performance of Fidelio, Beethoven's only opera, on the scheduled -- well after our visit was over.

There is one major theme from this visit to Lyon and it is "Next Trip." We are determined to return. May have to learn French first, though, since it is not a city geared to American travelers and most of the offerings are in French. English isn't the universal language some would have you believe! We did make it back in 2016 for a longer stay. Still not enough!

The next morning we returned to Geneva to collect our ski bag and meet up with our friends. Click your "back" button to continue with us on to Chamonix.