Not everyone relishes skiing in Europe. The snow is better in the western US and Canada and it's easier to get to. Europe is more like New England in this regard (although not as cold). European conditions can be very weird – we've crossed railroad tracks, roads and fences on European slopes. Many of the lifts are either surface lifts, i.e., Pomas, or otherwise idiosyncratic. (Less so now than formerly.) On occasion we've skied around mud, rocks, ice, cow patties and tree stumps. And there are (almost) always the buses. But you wake up in the morning and you're in Europe. Your on-slope eating choices are not typically limited to hamburgers, hot dogs and chili.

Another great feature of European skiing is that the resort areas are usually real towns that have been around a while. There is something to see and do while not on the slopes. Since Jim doesn't ski anymore this gives him something to do while I'm skiing. And it gives me something to do on my day(s) off. This is particularly true in Chamonix. 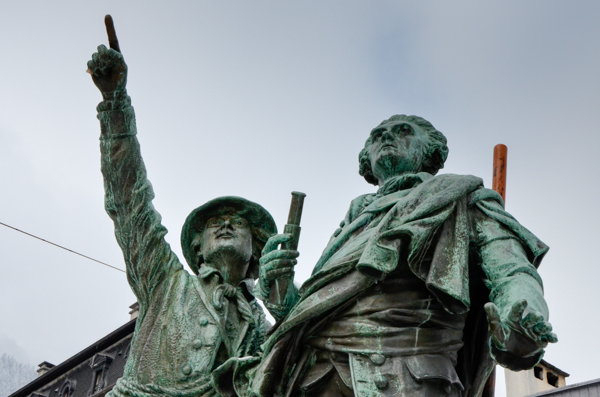 Chamonix is considered the birthplace of mountaineering. In the mid-18th century, Horace-Bénédict de Saussure, on the right, offered a reward for the first ascent of Mont Blanc. The reward was earned by Dr. Michel Paccard who attained the summit in 1786 accompanied by Jacques Balmat, shown on the left pointing to the mountain. Saussure was himself the third to ascend. He was a polymath who was once mentioned by Jefferson as worthy to be recruited to the new University of Virginia. 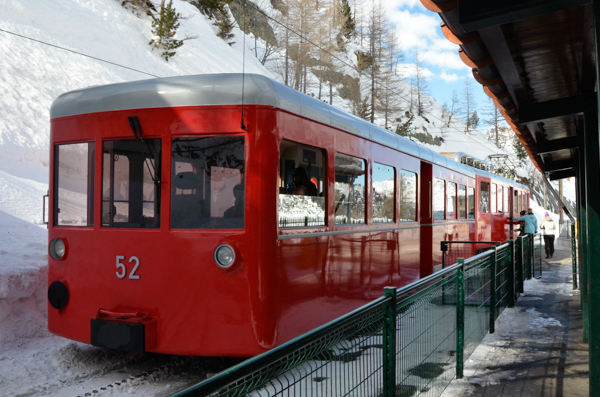 On my day off, Jim and I decided to take the cog train to Montenvers, overlooking the Mer de Glace glacier and the Vallée Blanche. We had visited the area on our last trip in 2002, but planned to spend much more time today. 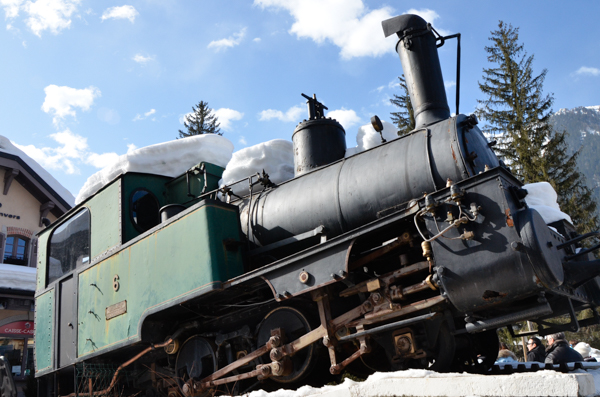 When the railway was completed in 1909, the steam powered locomotives looked like this. 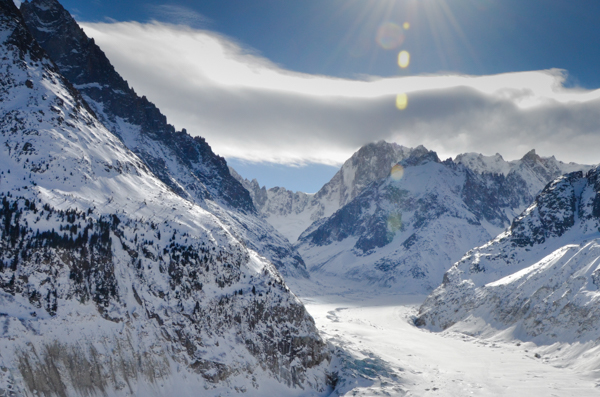 The Mer de Glace glacier, like all glaciers, grows and shrinks in response to the general climate. There was a fabulous multi-media exhibit at the new "Glaciorium" describing the life-cycle of a glacier. The link above shows the glacier in the summer.

During the last ice age, the Mer de Glace reached all the way to the location of Lyon. There wasn't much in the Alps above the ice. During the Medieval warm period, the glacier was roughly the size it is now, but during the so-called Little Ice Age it reached almost to Chamonix. The height at that time can be seen in the brownish scarring on the sides of the valley. 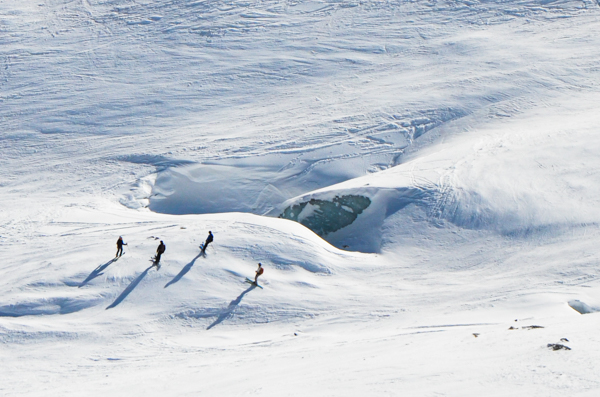 This group of skiers must either have started very early or really flown down the glacier. I took this picture at about 10:45. Even at this distance we could hear the characteristic scrape of skis on hard-packed boilerplate. The sound did not make me aspire to take the trip!

Although there are steep spots higher on the glacier, at this point it is mostly flat running. 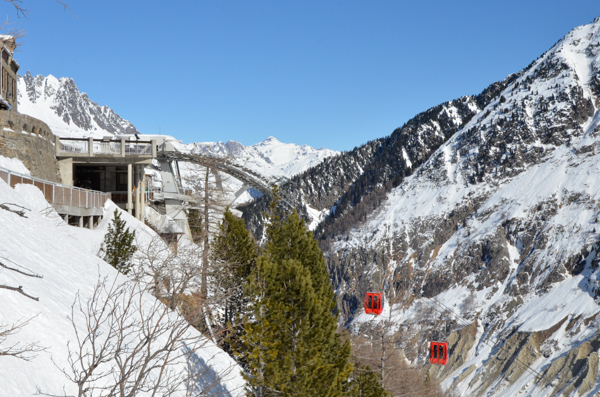 A gondola takes tourists part-way to the ice grotto excavated into the glacier. It was first opened in 1960 (and updated since). Perhaps at that time it led all the way to the glacier, but today it doesn't even come close. The glacier has receded dramatically in the past 30 years as shown by plaques on the rock wall. 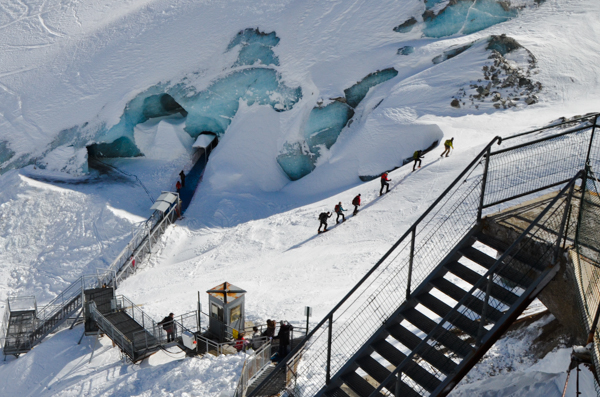 Just a few of the 380 or so steps down to the grotto. I took this picture just below the recorded level of the glacier in 2003! Think how many steps we could have saved had we made the trip on our first visit in 2002. Oh, except for that bum knee that kept me off the glacier that year.

The group of mountaineers was headed UP the glacier rather than down. We could see their progress for quite a while. 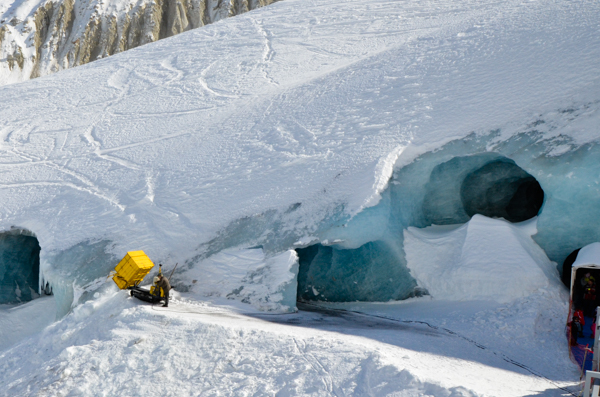 As can be seen from the various openings, the grotto is excavated anew each season. Jim called this excavator a "dump-Zamboni."

According to Wikipedia, at this location the glacier moves about the length of a football field each year or, on average, about five feet a day. Although that number is suspect (I couldn't find any corroboration), I have heard that this is one of the faster glaciers in Europe. I wonder how frequently they must adjust the access bridge. 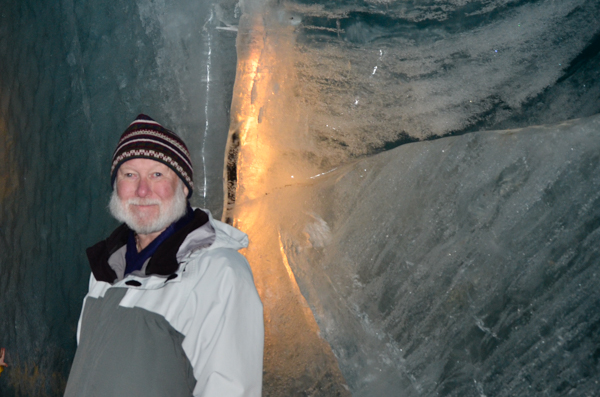 The lighting colors change in time with music that is played. The striations are due largely to trapped air. Glacial ice cores are used to determine the atmosphere in former ages – currently as far back as 800K years. The information at the link is super technical, but if you scroll down the page you can check out the graphics. 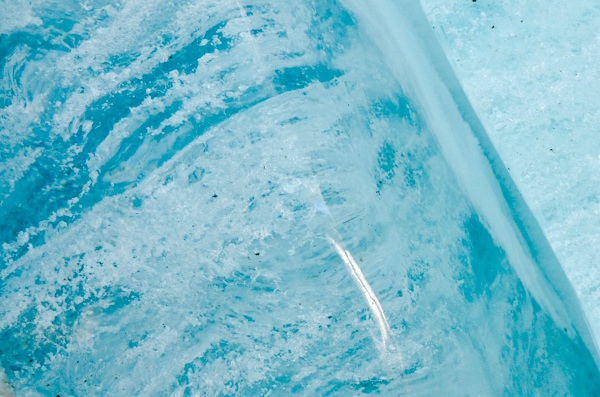 A close-up of the ice. 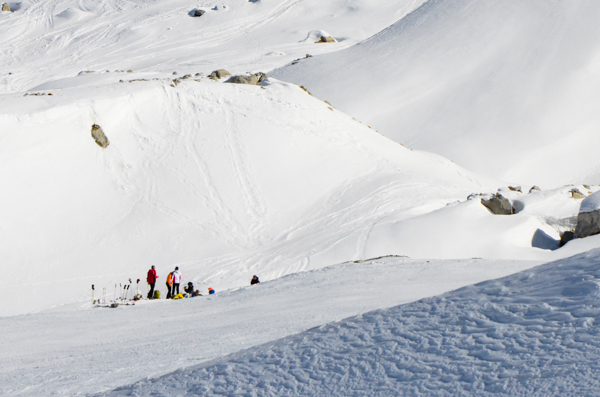 As the day progressed, more and more skiers and mountaineers appeared. This group seemed to have brought a picnic lunch because they stayed put for quite a while. 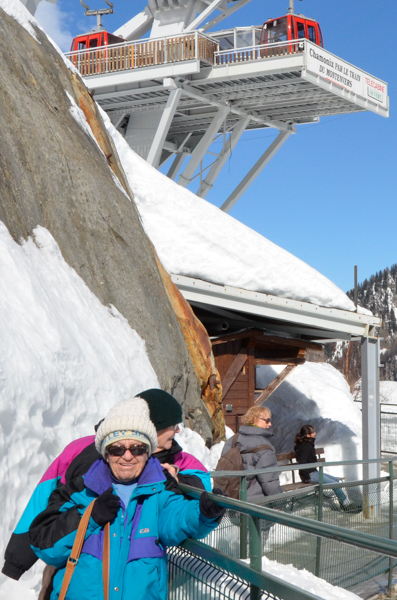 While struggling back up from the ice grotto we met Shirley Rettig (in blue) and her sister Beverly. They were looking over the edge and pondering whether to make the descent, which must perforce be followed by the ascent.

I suggested that I would put my pictures online if they wanted to see what they might miss.

We've known Shirley for years and it was a treat to meet her sister – who just happens to be another horse fanatic. That gave us plenty to talk about. 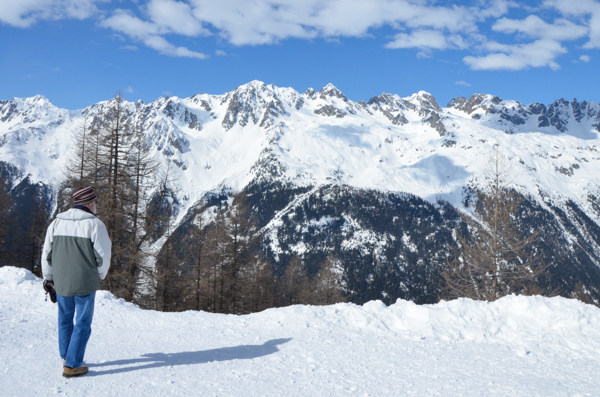 Prior to our hike down & back, Jim and I made reservations for lunch at the Grand Hotel Montenvers. The hotel is only open for lodging in the summer, but the restaurant is open all year.

The food was delicious (and rich) and we needed some walking around afterwards. Most of the hiking trails were closed due to snow, but we found this great overlook where we could see the Flégère ski area across the valley. We also enjoyed touring the Glaciorium exhibit. 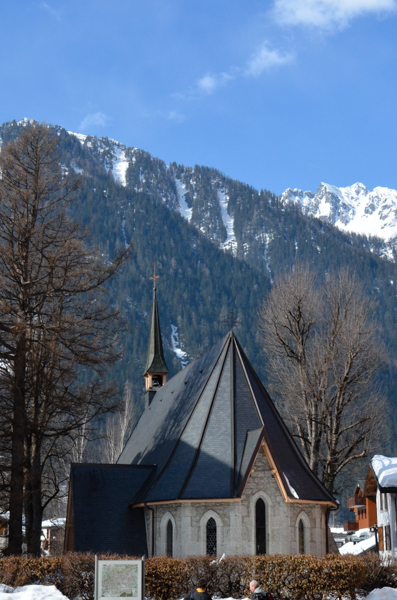 After taking the train back down to the valley, we walked around Chamonix a bit. We found this little church, which is the Eglise Réformée, or reformed church. It was closed, but there was a flyer on the door announcing an organ recital at St. Michel Catholic church. We told others about the recital, but only the Rettig sisters and Jim & I attended. We couldn't stay for the entire program because of a BRSC event that night, but it was a special treat.

Many years ago when visiting Alpe d'Huez on a PVS ski trip, we were privileged to hear the "final exam" of the organ students at the University of Grenoble. This took place at Notre-Dame des Neiges, which had a striking organ.

The organ at St. Michel is the centerpiece of a summer organ festival.

Next trip (a recurring theme) I hope to see more of this reformed church. 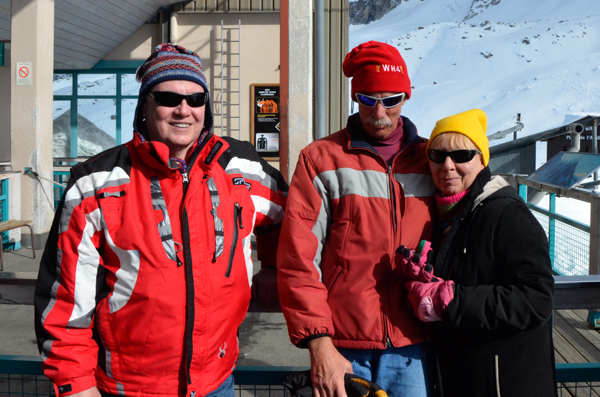 The climb down and back from the ice grotto plus the other walking around on my "day off" left me a little pooped for skiing on the following day so I took another day off.

In the afternoon Dick, Dave, Cheri and I rode the tram up to the Aiguille du Midi hoping to see Mont Blanc up close and personal. It was not to be, but we had a great time anyway.

As we were crammed into the last tram down, Cheri found herself up close & personal with a flirtatious European who invited her to spend the evening with him. He graciously said he would bring her back before ten. Their repartee had the entire tram giggling (who says the French don't understand English!).

When we arrived at the top, the clouds and blown snow hid Mont Blanc itself, but I was able to get a quick shot of Mont Blanc du Tacul, one of the neighboring summits.

At least it was not as cold and windy as the Vallee Blanche skiers had reported.

From the observation deck we could look down onto the spot where skiers depart for their descent of the Mer de Glace. To the right of the rock face toward the bottom of the image you can see two tiny dots. They are mountaineers hiking across the snow field.

As I recall from my earlier visit, the skiers start down the slopes to the left or right of the rocks in the upper part of the picture.

This late in the day all the skiers have departed. 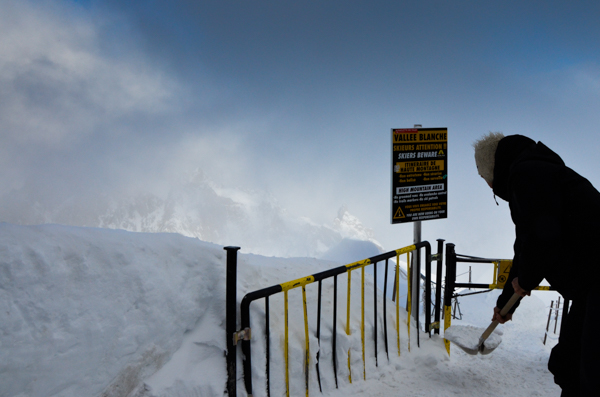 This is what my father would have called "the jumping off place." 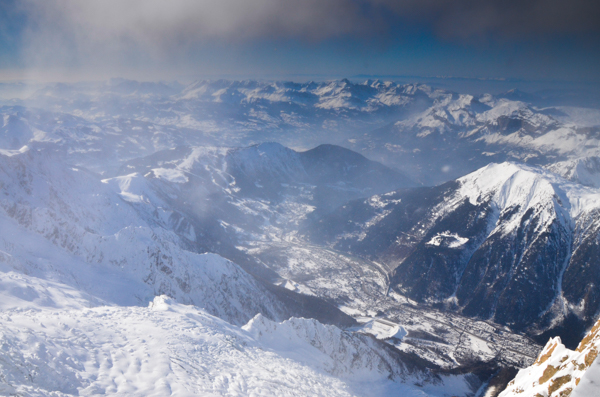 The view over the valley of Chamonix is spectacular. Most of the ski domaines are to the right of this picture, but the trails of the Les Houches area can barely be seen in the center of the picture. It is the only area below the tree line and would have been the perfect place for the first day's skiing in the snow and fog. Next time! 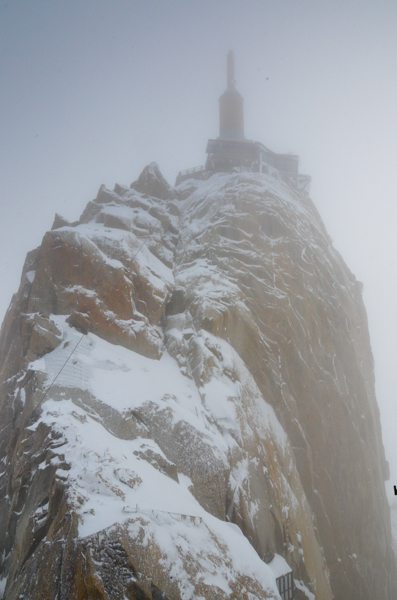 Aiguille du Midi soars high over the valley. It is usually visible from the valley even when Mont Blanc itself is hidden. There is an elevator that takes tourists up to the pinnacle for viewing. It was too cloudy to take pictures from above.