Chamonix is not all about skiing – it's also about mountaineering! The town straddles the river Arve in a deep valley that runs between Mont Blanc, the highest European mountain east of the Urals, and the Aiguille Rouge range.

The conditions weren't great on our first day. Sharon Mulholland and I skied together at the Le Brévent area. Trust me, the view behind Sharon is spectacular – if we could only see it. This is from the deck at La Bergerie. Check the link to see what we missed. 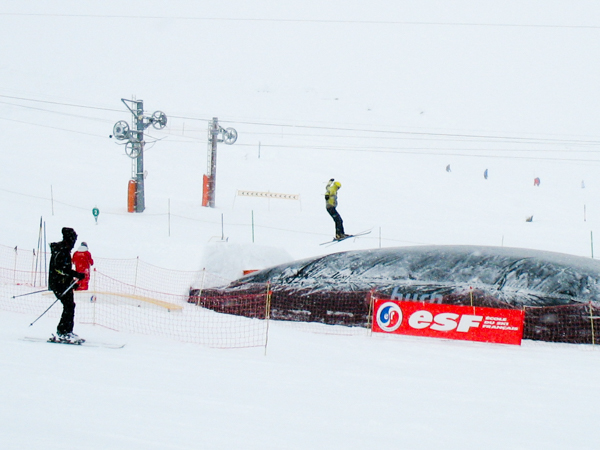 One of the attractions of the area is the Big Airbag.

For those who want to practice catching big air, you can zoom down a slope and up a ramp with the knowledge that a soft landing awaits. Needless to say, the boarders tended to be a bit more aggressive. It was almost possible to clear the entire bag and slide off the far side.

There were area staffers at the top of the slope that doubtless gave good instruction and advice on technique and safety. 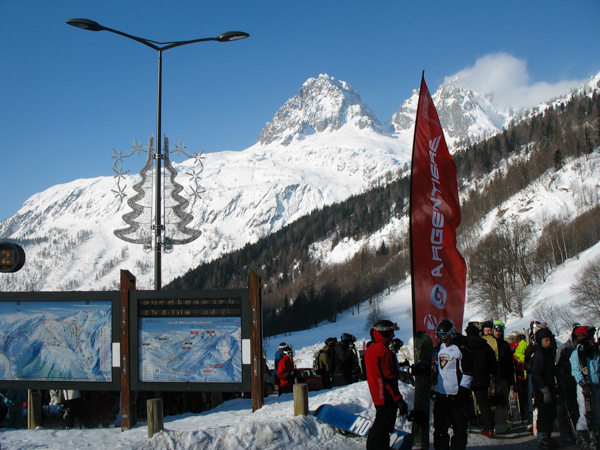 Only the first day was socked in!

The next day I traveled up the valley to the Domaine De Balme, also known as Le Tour, with Nancy McKinley and John Brunelli.

As is common for European areas, a bus ride is necessary to get to the ski slopes. Le Tour is the farthest from Chamonix and the bus was jammed because it served three of the valley areas.

The line for the initial gondola was humongous, but the area is large so the slopes weren't crowded.

We've made it onto the slopes are are ready to roll. 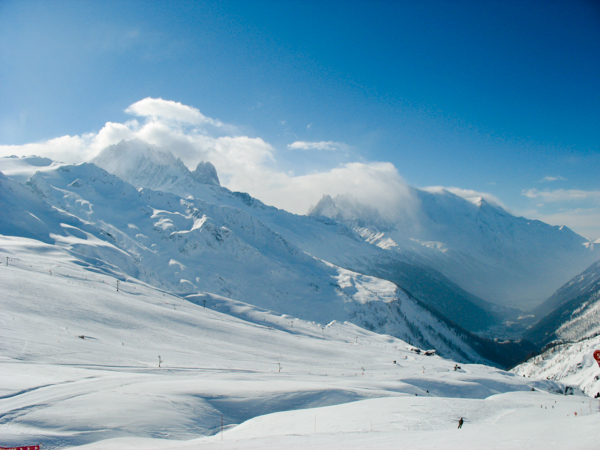 The view down the valley was stunning. The peak in the clouds on the left is the top of the Domaine Des Grands Montets. I didn't get to ski that area on this trip although when we were in Chamonix in 2002 I did ski from the top (with a guide).

I planned to at least take the lifts up to take pictures, but there just wasn't enough time! 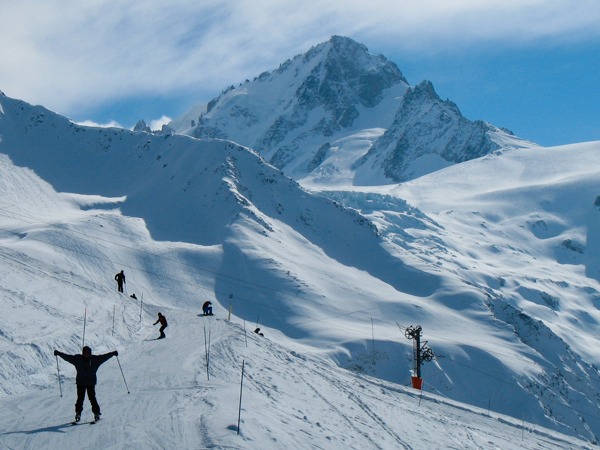 After a morning skiing we decided to head over to the Vallorcine sector for skiing and lunch. John is horsing around a bit on the cat track. I think the peak in the background is Aiguille Du Tour.

While over in this area we saw a pretty spectacular wipe-out. A young British girl, perhaps nine or ten, got going too fast. When she finally fell, one ski released and soared into the air about 12-15 feet. By the time we had collected her "yard sale" of equipment and skied down to her, her father and younger sister had caught up. The youngster wasn't injured, but she was on the verge of tears until John told her that it was a really impressive wipe-out. That got her laughing. We skied off just as the younger sister started to complain that they needed to go faster.

Eddie the Eagle you've got competition! 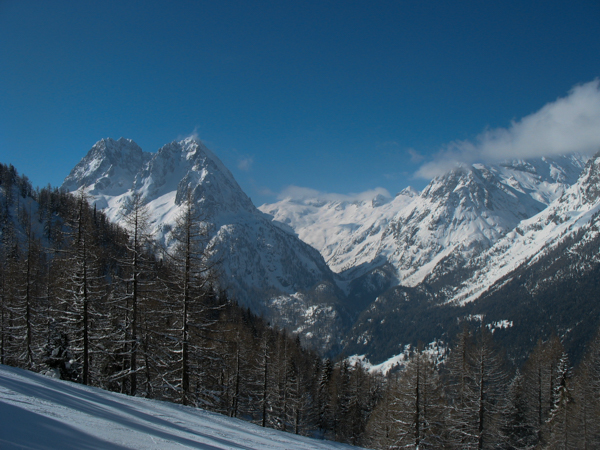 As we neared the Vallorcine side, we found trees. Most European areas are high above the tree line. This year there was enough snow that we were able to ski all the way down into the valley. 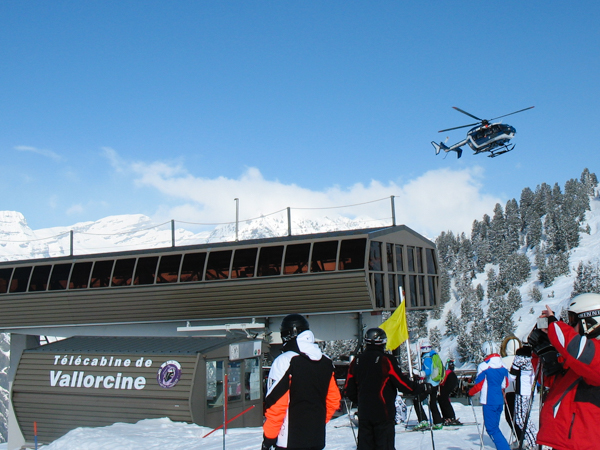 At the top of the Vallorcine gondola, we heard the unmistakable whup-whup of a helicopter. Since we didn't stick around to rubber-neck, we don't know for sure, but believe that someone had been injured.

Ironically the only injuries in our PVS group were incurred prior to arriving in Chamonix! One skier had been wiped out by a hit-and-run boarder in Colorado a couple of weeks prior to the trip and had to cancel. Another of our members had gone on a pre-trip extension to Paris, slipped on a stairway and broken her arm. She was a good sport about it, but quite disappointed to miss the skiing. There were several other non-skiers in the group so she wasn't alone all day. 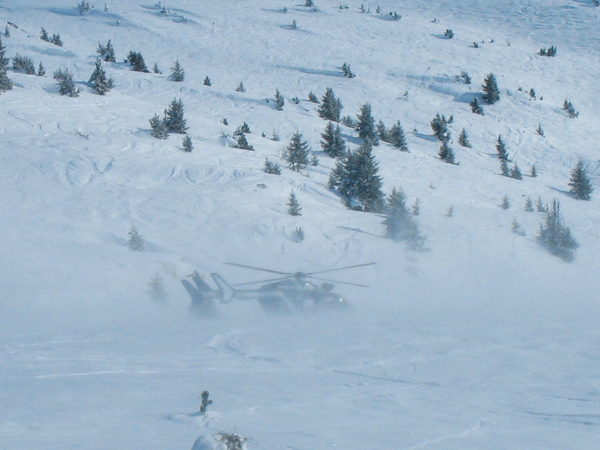 The backwash from the helicopter blades kicked up a snowstorm as it landed.

That evening when I got back to the hotel, Jim said that the helicopters had been busy coming and going all day. I suspect that many enthusiastic skiers just starting their ski week got in over their heads at this fairly difficult area. By the end of the week crutches were a common sight around town. 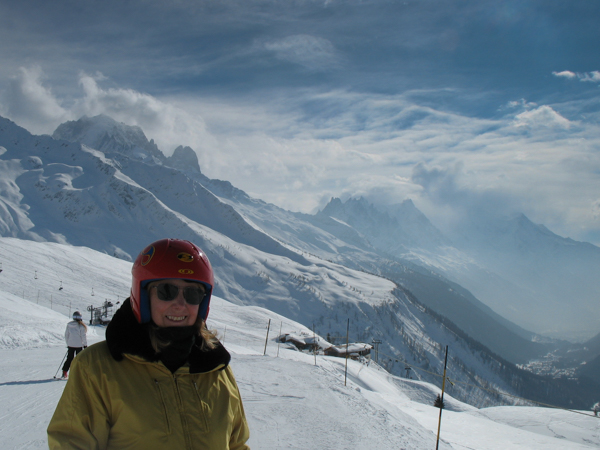 After a light lunch at Vallorcine we came back up the mountain to ski some more. Actually just before lunch we were considering whether there was a bus back to Chamonix from the eatery. This was a crucial determination because had there been, we all agreed that a carafe of wine and a leisurely bus ride would be a fitting end to the first day of real skiing.

We should have asked! It turns out that there WAS a bus we could have taken. Oh well, the skiing was nice too.

This was actually my last ski day in Chamonix. Between skiing in Italy & Switzerland and sightseeing around the valley, I only got to two of the five major ski areas in the valley. Next time.