Our final day in Cornwall started in Boscastle. This village was devastated by a flood in 2004, but has come roaring back. Google "Boscastle flood" to see amazing videos of this devastating event. Thankfully no one was killed!

The plan for the group was to hike from here to Tintagel (pronounced tin-TA-jell), but Jim, who had been battling a sore throat for several days, led a small group of trouble-makers to stay in Boscastle and take public transit to Tintagel. Although the hike was perhaps the most spectacular of the trip, it was also the most strenuous, so that was a good plan. 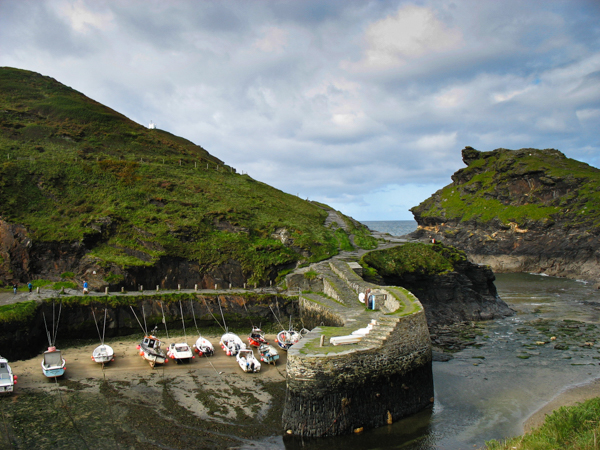 The low tide has yet again stranded boats in the small harbor. This narrow outlet of two rivers, the Jordan and Valency, causes flood water to back up into the channel and village.

I mentioned English Eccentric Interiors and architectural follies earlier. Here is the Boscastle contribution. What a great place to sit and catch some rays, greet the passersby, catch the school bus, etc.!

Jim saw this Lotus Super 7 in town. You should hear him talk about his days in SCCA racing (not in the same class) and the uniqueness of this car. There have been many replicas made, but this is the real deal. 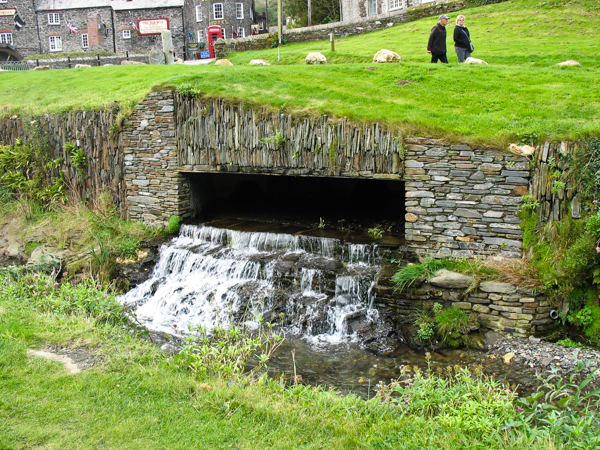 I had also been fascinated by this stream outlet into the main channel at Boscastle, but Jim got the better picture of it.

Jim also got this picture of the hikers hitting the trail. I'm the blue dot just to the right of the right-most chimney of the upper house. After the steeps of the previous day's hike on the south coast, this climb didn't seem like a big deal. HA! We were just getting started!

The trail above the entrance to Boscastle harbor. Geoff told a story about a Boscastle fisherma returning to port in 2004 unaware that there had been a terrible flood ... until he noticed a Vauxhall car floating out past the harbor. And then another.... 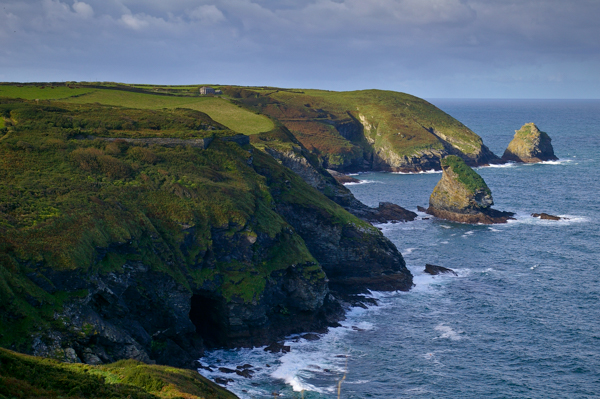 We've climbed to the top of the cliffs. The cave at the water's edge is common feature on this section of the trail. The caves were old mine entrances enlarged by the constant surf. There was tin and slate mining on this coast. There is a stone foundation remaining high on the cliff above the cave. 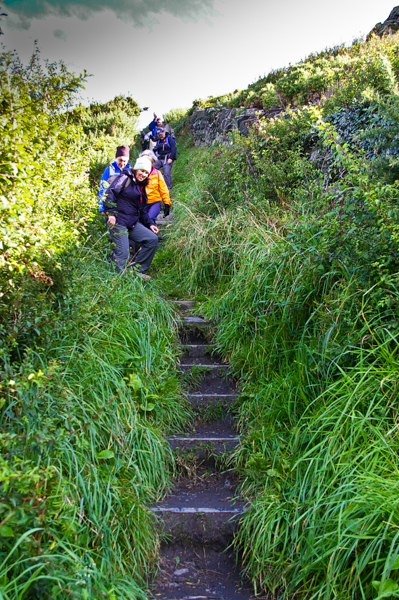 There were more and steeper ascents and descents today that on the previous day. The path is well-maintained, with steps such as this in the steepest parts. 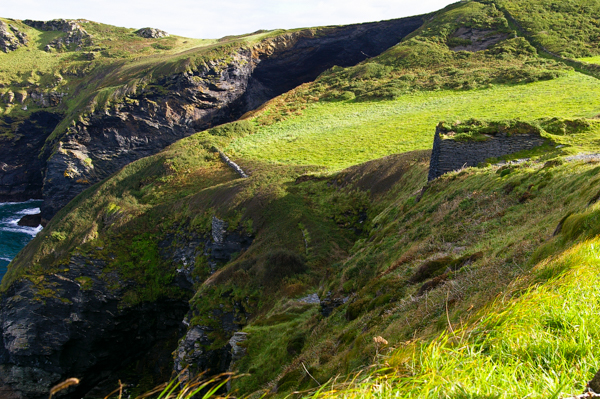 Another set of slate workings down below with the ruins of buildings on the cliff above. The rugged coast, intensive agriculture and remains of history all reachable by a public footpath is what drew me to this program in the first place. I was not disappointed!

The only thing that could make it better would be a bridle path and a good horse.

I was expecting to see more waterfalls, but this one down in the inlet was the only one that I remember seeing. There is at least one spectacular waterfall along this coast, but I don't know where it was. Perhaps it was the upper part of this one? There's a lot of vertical between the top of the cliffs and this little cascade.

Roy said that this was one of the prettiest examples of dry-stacked stone wall in his experience. It was intricate and beautiful. 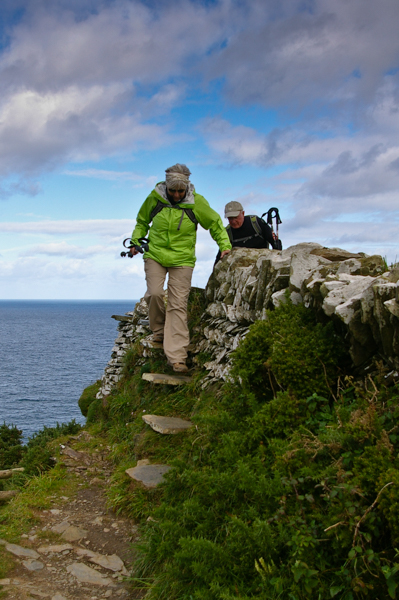 This stile was built into that lovely wall. Of the various stiles that we had to negotiate, this was one of the easiest – although I wouldn't want to be climbing over it on a rainy day when the stones might be slippery. 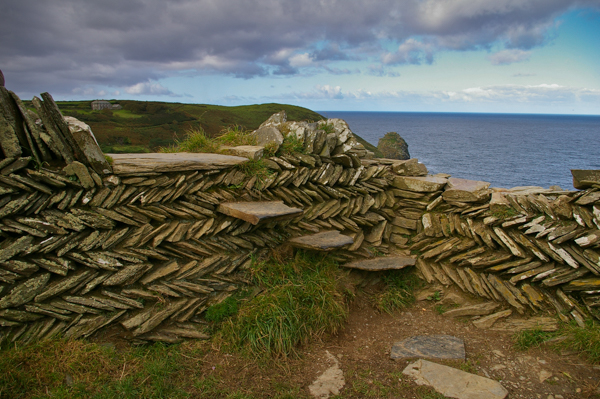 The other side of the stile.

We spent time exploring and resting at Fire Beacon Point. There is a shallow depression where the beacon was constructed. It's a logical place for such a beacon because the coast was visible in both directions for miles.

We could imagine the scene in The Lord of the Rings: Return of the King when the beacons summoned the allies from Rohan. 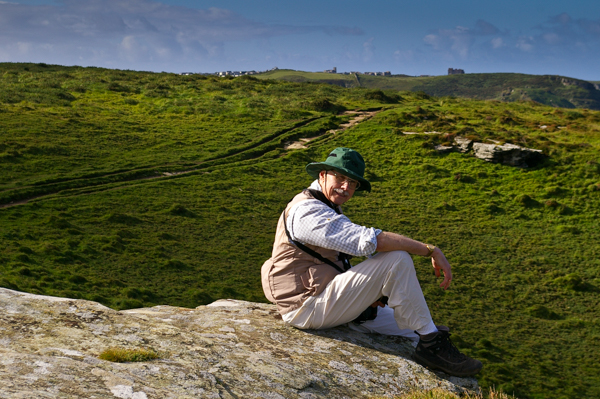 Bill was the true photographer of the group. He had incredible energy and was forever buzzing around taking pictures. He's promised to share and I'm sure everyone else is as anxious as I to see his photos. He gave me good advice about picking out a new camera.

He and Judy, another of the "serious" photographers were admiring each other's vests with pockets for this & that. Thankfully there is no need for multitudes of pockets to hold film canisters anymore! How many times have I run out of film. Now I just run out of batteries. 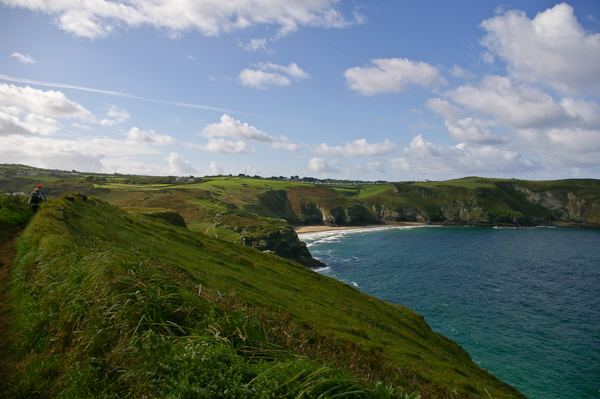 Another fabulous beach tucked away in a cove. There were a few surfers testing out the waves, but the lack of strong winds today affected the surf. 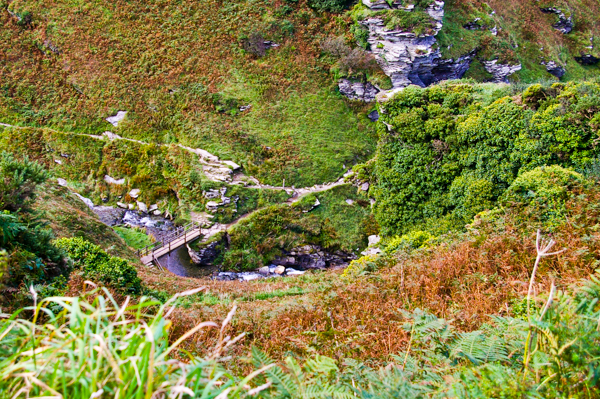 The climb down into Rocky Valley. The walk along the stream is supposed to be lovely. It features a waterfall. We were hikers with a goal, however, so we didn't take any side trips here.

It was a relief to get down the steep path and over the bridge ... until we realized that we had to get back up again! 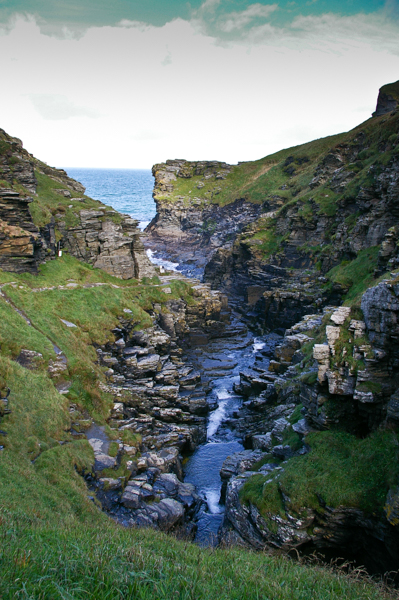 The Trevillett river runs down to the sea. It's easy to see how the valley got named "Rocky." 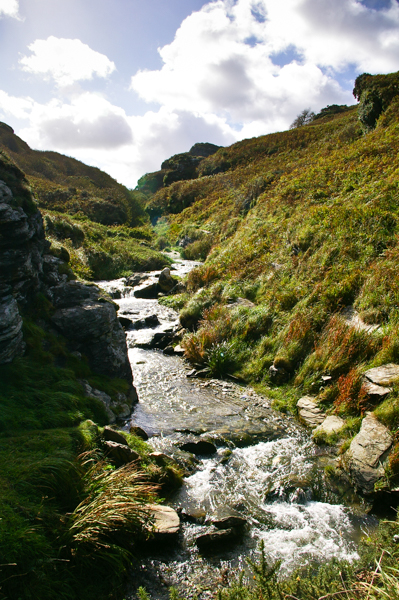 The river upstream of the bridge. 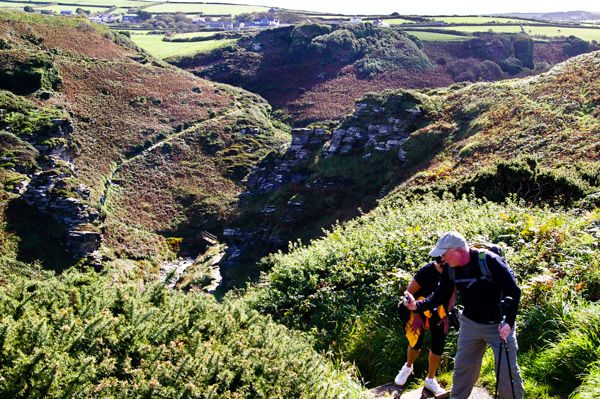 We've made the top (Huffa-Puffa!). I prefer going uphill to going downhill, but this climb made me think real hard about that preference! It was grueling. At this point I would have been perfectly happy to be airlifted all the way back to the hotel. But no, we still had a bit of a hike to Tintagel.

This is more-or-less our first view of Tintagel castle – or at least its remains, visible as a half-circle to the left of the headland. This is the "island" portion of the ruin. The "mainland" portion is out of sight to the left.

The cove is called Tintagel Haven. The large cave at the right is the adit of an old silver-lead mine. The smaller on the left is called Merlin's Cave. It is only accessible at low tide. Since our visit, a controversial face of Merlin has been carved into the rocks. 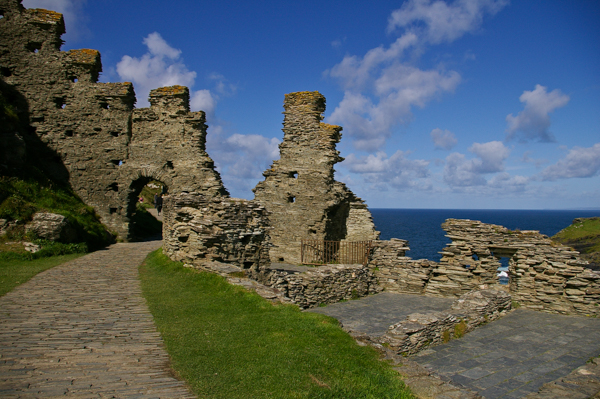 In spite of being pooped, I opted to visit the headland even though it meant many more flights of stairs. King Arthur was said to have been conceived (or born) at Tintagel, but the existing ruins are much later. Earl Richard of Cornwall constructed the castle in the 13th century. There were older ruins on the island, but they were by no means as spectacular. 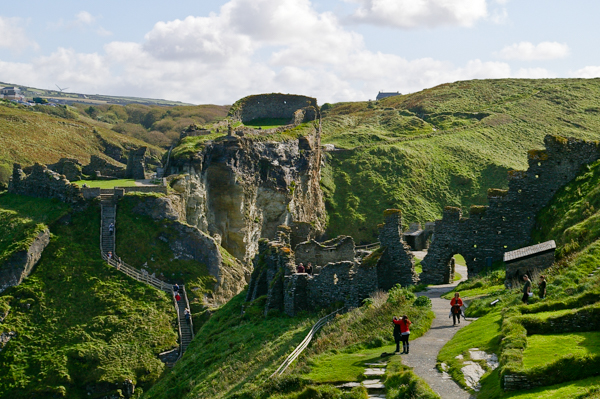 There are even more extensive ruins on the mainland, but I didn't relish climbing up yet more flights of stairs. Besides, time was running out. Tintagel is worth much more than the few hours we could spend there. 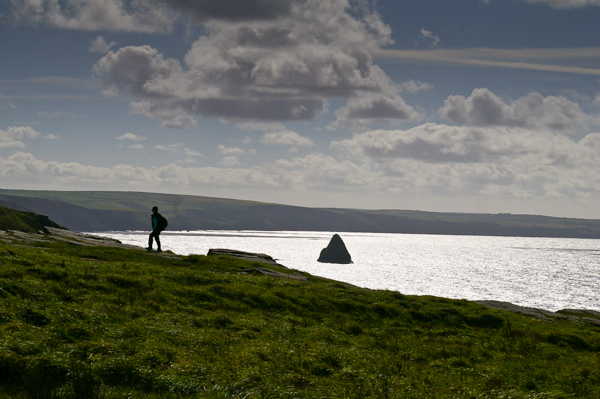 The view to the southwest of the island.

After the long climb the village where I had agreed to meet Jim (at a pub, natch), I was more than ready for a pint! We had quite a gathering to enjoy the sun (L-R): Susan, Jim, Ellen, John, Steve, Anne & Ed.

This was our last day in Cornwall and it was a fitting end to a marvelous trip. The next morning we headed to London by way of Bath.