After dropping off the garden contingent the hikers continued on. The trip to the trail head was pretty exciting on our little bus. Branches scraped the sides and potholes were numerous, but we arrived without incident and heartily congratulated the bus driver.

Guide Geoff Williams is briefing us on what to expect for our walk along the Coast Path from Dodman Point to the village of Mevagissey by way of Gorran Haven and Portmellon. As usual it started out as a cloudy and chilly day, but turned fine as we walked.

At the tip of Dodman Point is a large cross, constructed in the late 19th century as a navigational aid. There are also remains of Iron Age fortifications and barrows, but we didn't observe those. The land drops away precipitously on three sides of this point.

Although the sea seems much calmer on this side of Cornwall looking over the English Channel, this has been the site of many ship wrecks. We passed an abandoned 18th century watch house that once monitored shipping.

One of many signposts throughout our travels.

The morning light was dramatic.

If it weren't for the barely seen cars behind the hedge, this farmhouse could be in just about any century. 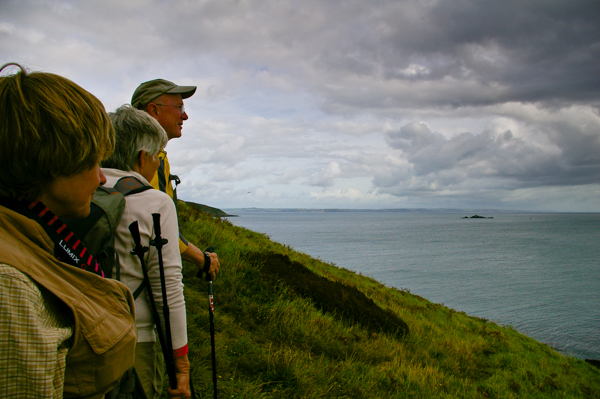 We stopped for an occasional breather and time to contemplate the sea. I've never been a huge fan of the sea coast in general, but the Cornish coast was gorgeous. I can begin to see how living at the shore is so popular. Still, give me the mountains of Virginia. 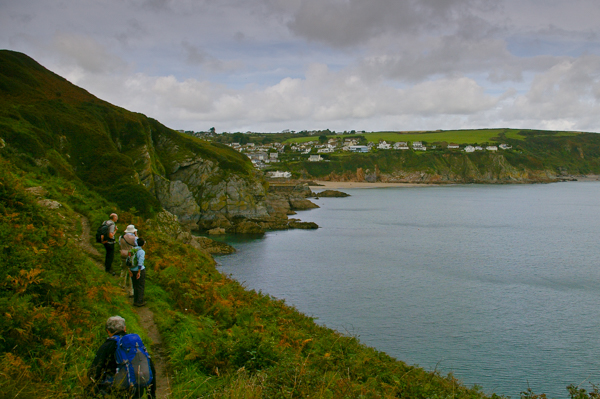 Approaching Gorran Haven. The villages along our walk were advertised as "unspoiled fishing villages," but they all had quite a few obviously expensive vacation or retirement homes. At least they were not crowded with tourists and curio shops like St. Ives or Padstow.

We stopped here for a snack and a bio break. There were many well-maintained public facilities all along our travels. We welcomed each opportunity. 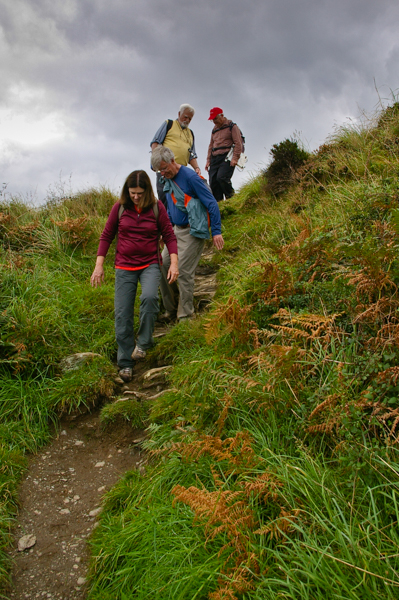 Getting down off the cliffs into the villages along the coast meant some step declines followed by equally steep ascents. Having had one too many ski injuries I find that going down is much harder than going up and this walk was the most challenging of the trip in that regard.

Roy had helped build some of the steps along this path.

The fall is a great time for walking in Cornwall, but Geoff said that the spring is even better. There are wild flowers in bloom and the weather is still cool enough. If we get back there, we'll aim for April.

By this time we're all shedding our jackets. 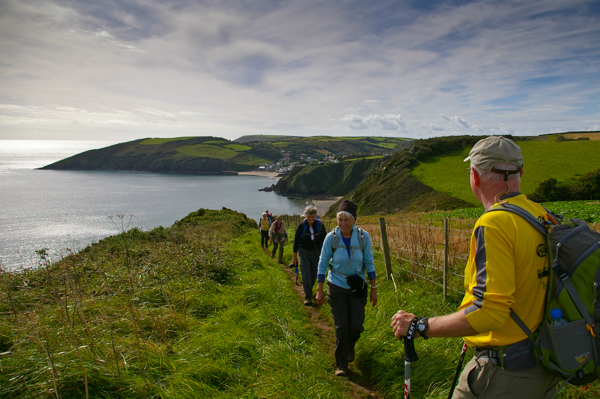 We've climbed up a steep hill on the other side of the village.

Geoff said that the coast path was controversial with the neighboring farmers until they negotiated an agreement to fence the entire trail to prevent dogs from chasing livestock. Pastures run right up to the cliffs and many walkers bring their dogs. In spite of numerous signs few dogs were leashed. 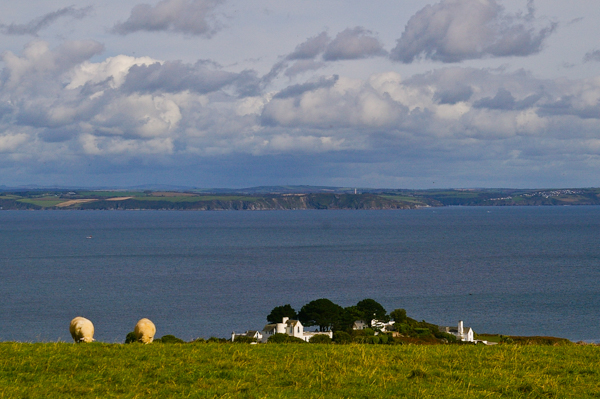 As we approached the buildings I asked Geoff if there was a Esthetic Ministry that approved all construction along the coast, because everything was sited so beautifully. (The answer is no.) One of these buildings is an old chapel, no longer used as such. I think I heard that it dates from the 15th century, but I've not been able to find a reference to corroborate that. 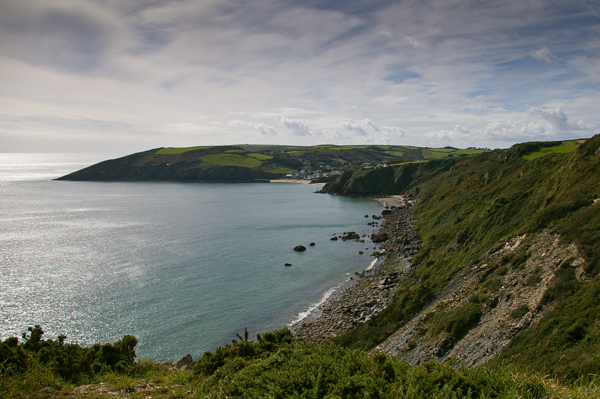 A gaggle of school children scrambled down the cliff to the shingle beach. We chuckled over the paperwork that would be required in the US IF it would even be allowed!

Also in this area a couple passed us with their dog, a friendly Golden Retriever. At least the couple passed us, the dog did not. He stayed with us for a while and then vanished. Later we passed the couple frantically calling their dog. They must have known a short cut because when we got to the next village they were already enjoying the sun at a café WITH their dog!

Chapel Point is near the village of Portmellon where we will be having lunch. The city of St. Austell is on the far side of the bay. 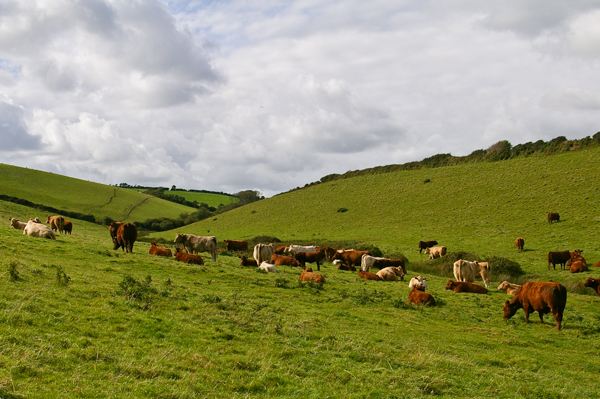 Just before the village we passed through this cow pasture. One of our number wondered how she could get the cows to turn and face her for a better picture. Roy didn't miss a beat: "You have to ask them to moooove."

This was the best group for a trip that we've run across. There was always hearty laughter somewhere along the trail.

I asked Geoff why so many of the houses in Cornwall had blue trim. He said blue and white were the traditional colors for the ships, but there was a particular blue that was more traditional than others. Unfortunately I didn't ask which of these was the proper hue!

We had lunch at the Rising Sun Inn in Portmellon. I ordered a Cornish Pasty (pronounced PAHS-tee) to go with my pint of Doom Bar. It was yummy. 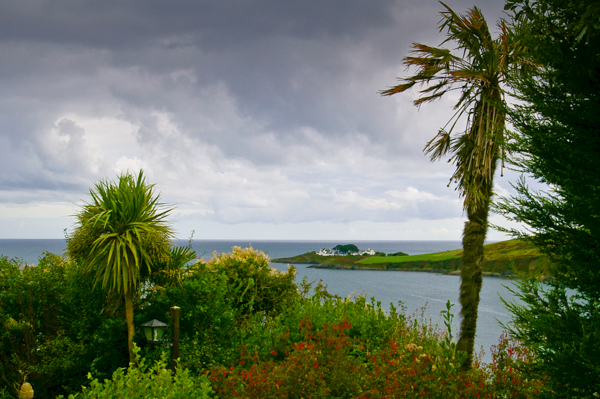 Another view of Chapel Point from the road to Mevagissey. I couldn't pass the "tropical" garden at this house without taking a picture. 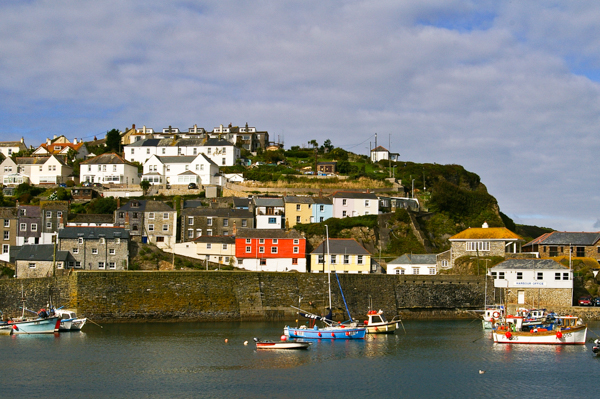 The tide has come in as we walk into Mevagissey so the boats were afloat. The garden contingent had recently arrived and we were met by several who had an eye out for us.

Jim was not among them. I asked Geoff where I could find the best pub in town. After ascertaining that I meant "best" rather than "most popular," Geoff took me straight to the Fountain Inn. There Jim was along with our fellow pub-crawlers Jane & Susan. Can't tell you much about Mevagissey, but the Fountain Inn is a jolly place! We discovered another great Cornish ale there: St. Austell Tribute. Unlike Doom Bar, which is actually owned by Molson-Coors, St. Austell is still independent. 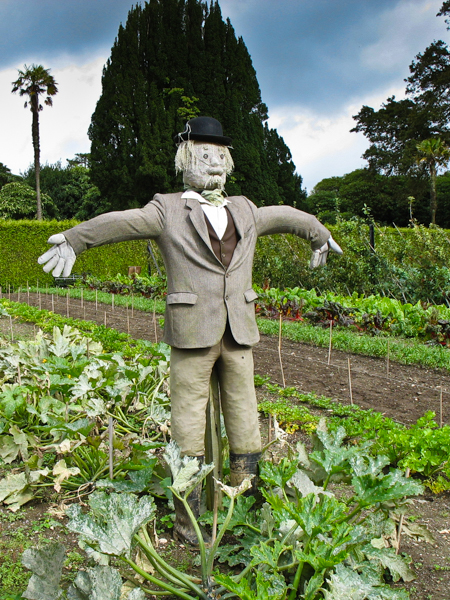 While I was scrambling up & down steep stairs, Jim very much enjoyed his time at Heligan.

Only in England would a scarecrow wear a bowler hat and three-piece suit! This natty gentleman is named "Diggory" after one of the gardeners on staff prior to WWI.

The "Lost Gardens" at Heligan were developed in the 18th & 19th centuries, but after WW I they declined. By mid-century nature had reclaimed her own. The family sold the manor house after dividing it into condominiums but retained the gardens. In the early 1990s archival sketches, photographs and the remains of walls, greenhouses and plantings guided the restoration.

I won't attempt to give all the details; there have been books and BBC documentaries on the subject, but I will include some of Jim's pictures. Check the web site for more detail. 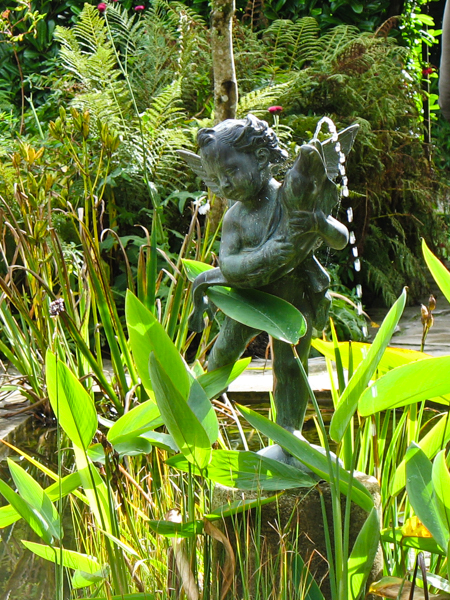 The Italian garden was restored first with its pond, fountain and outbuildings. It is situated to catch all the sun and warmth possible in the Cornish climate.

The statue is not the original, but after extensive research it was cast in Italy from the original mold.

Cold frames and greenhouses produced all-season vegetables and cut flowers for the family when it was in residence. The opaque arcs seen in the glass are original features called "beaver tails." They channel rain water away from the wooden framing. Fruits and vegetables grown at the garden are used at the restaurant.

Heligan was one of the first gardens in England to grow pineapples. 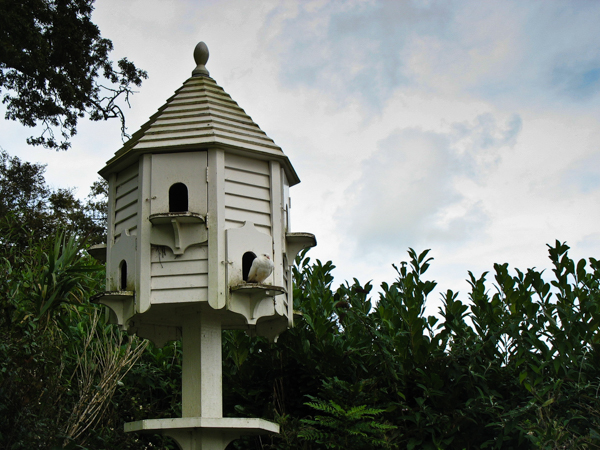 This house provides homes for insect-eating birds. The gardens use an integrated pest management program designed to be both effective and environmentally friendly. 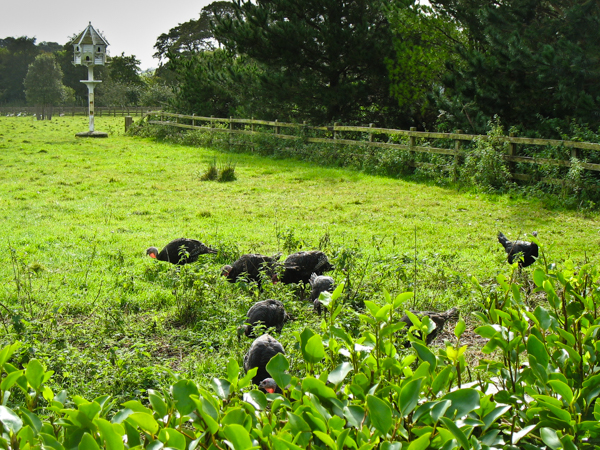 Turkeys are not native, but they also help with pest control. I don't know if they go into the sandwiches at the restaurant.

Efforts are made to recruit various other critters. The tower in the center of the photo is a wildlife tower intended to attract a variety of animals, perhaps including bats.

I like the crooked stick holding the bird feeder. Look closely for the little birds. They look like chickadees. 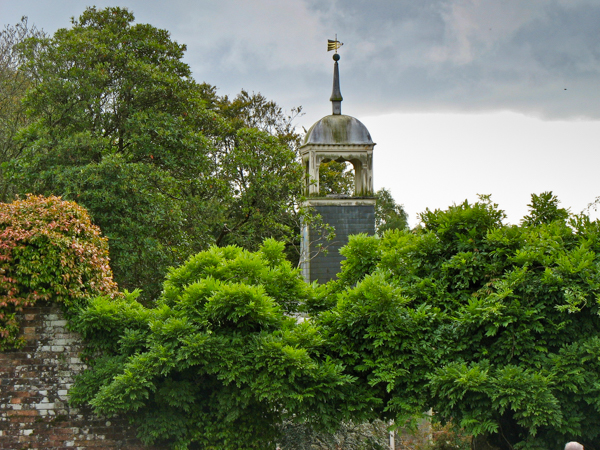 This graceful tower is over the old stables, which are now part of the private property associated with the old manor house. I can only imagine what the rest of the stables were like back when they were actively used. 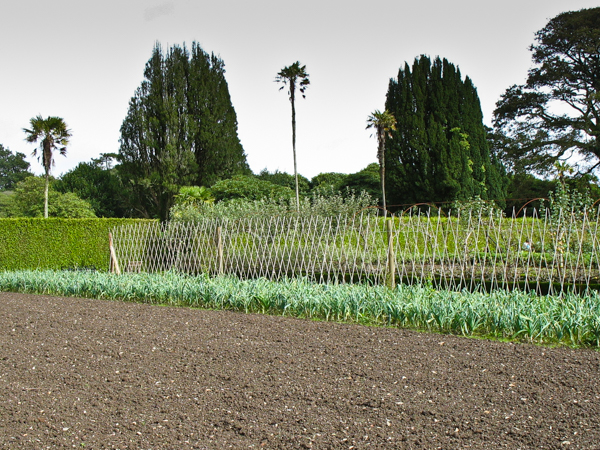 Many of the vegetable beds are being "put to sleep" for the winter while others are still producing fall crops. 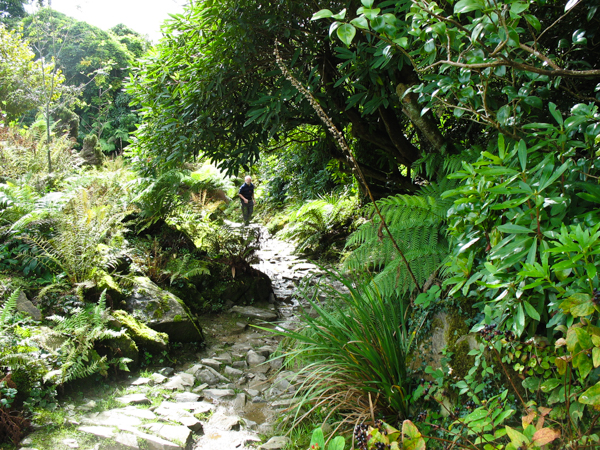 The Ravine was designed as a rock garden, but it seemed to take on a life of its own. It is now filled with easy-care plantings appropriate to the site & climate. 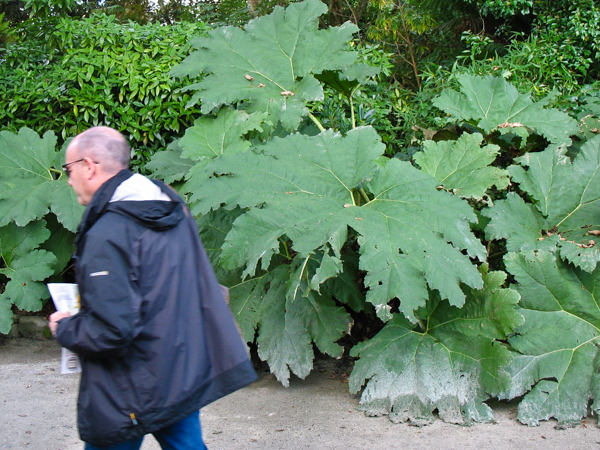 Jim was fascinated by this plant with enormous leaves. One of the archival photographs of Heligan in its heyday shows a gardener holding a leaf from this plant.

Click your "back" button to return to Cornwall's north shore and a visit to King Arthur's "birthplace."