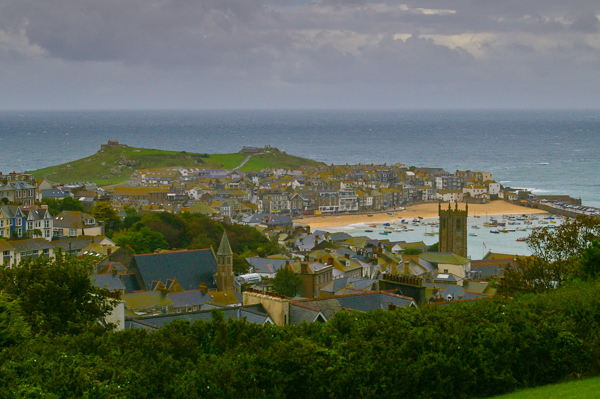 Our next day had no long hike scheduled. We traveled to St. Ives, which is as far west as we got – not far from Land's End. Ok, I'm not a beachy person. Although St. Ives is said to be a favored seaside vacation spot, I wasn't taken with it.

This picture was taken as we were leaving. The tide is more-or-less in so the boats in the harbor are afloat. This was not always the case. 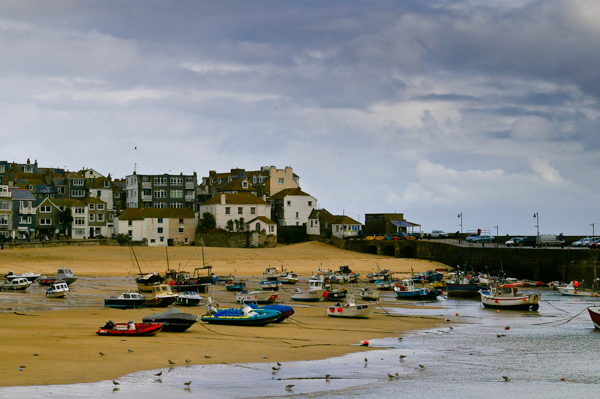 This is what the harbor looked like when we first arrived. Cornwall has quite a tide differential. It would seem to be an ideal place for generating electricity based on tidal changes. At present there are numerous wind farms in Cornwall – and quite a bit of controversy to go along with them.

The day started out rainy and windy, so we passed on the short group hike and puttered around town on our own. 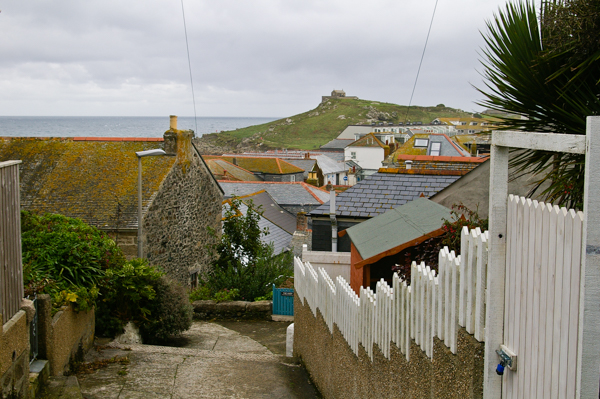 We fled the crush in the main tourist areas to find some quiet. There are a large number of quaint little houses in St. Ives – most of which are B&Bs. 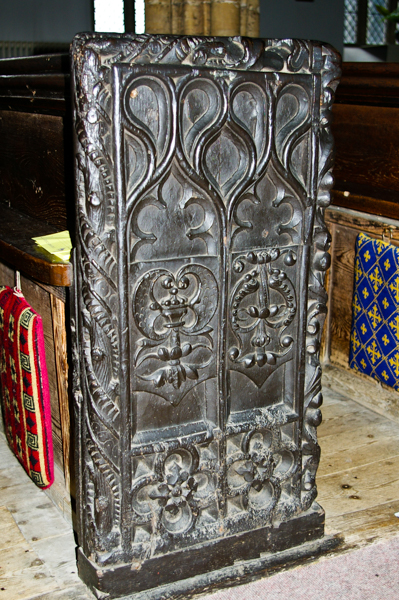 The 15th century church is dedicated to St. Ia, another unfamiliar saint. According to legend she traveled from Ireland to Cornwall on a leaf.

Most of the church had been renovated over time. I was struck by the detailed high-relief carving on the ends of the pews. The central figures on each one were unique. 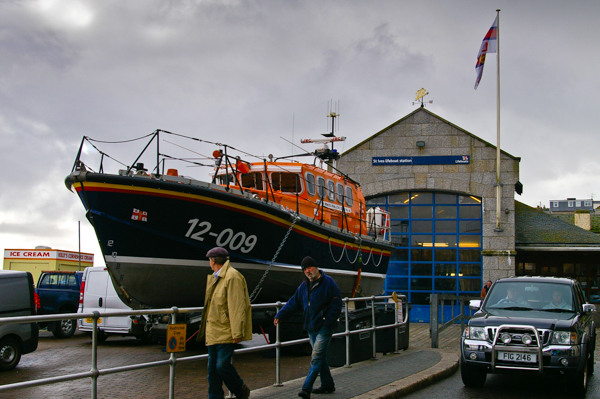 All the villages we visited along the Cornish coast had rescue stations. A museum in Padstow, which we visited later, had an exhibit on the volunteer groups that attempt to rescue sailors and passengers from wrecked ships – sometimes losing their own lives in result. We heard a story of one village that was abandoned when most of the men were killed attempting a rescue. The women were unable to keep the village going on their own.

The significant tides mean that rescue boats are kept on trailers so that they can be taken to wherever the water happens to be when the boat is needed. 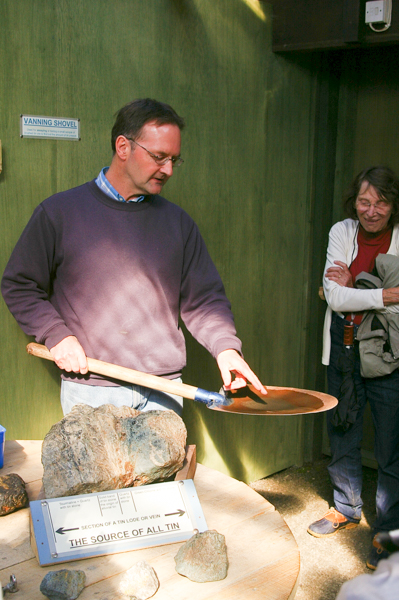 After leaving St. Ives we visited Blue Hills Tin Stream – a working tin producer. Cornwall has been famous for its tin mining since at least the Bronze Age. At present there is no large-scale mining in Cornwall because increased competition in the late 20th century lowered prices enough to make it uneconomical. Although prices have risen since then, the cost of re-opening old mines is prohibitive due to flooding and other reasons.

Blue Hills is a small producer that makes jewelry from alluvial tin obtained using historical methods of extraction and smelting.

Our guide is showing us the "vanning" process used to see if sand contains tin. It is not unlike panning for gold, but the desired color is black not gold. 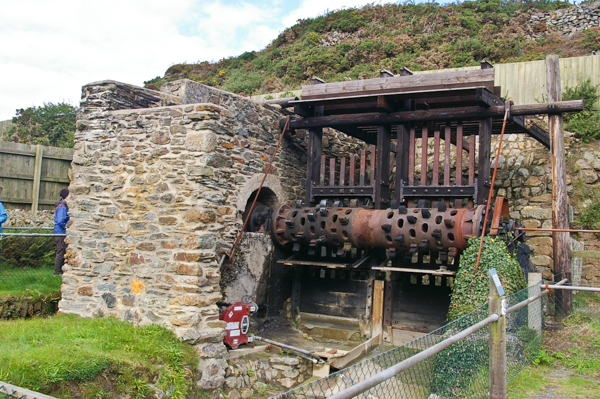 This water powered stamping mill crushes the tinstone into a sand that is separated to obtain the ore for the smelter. The hammers, which are the vertical bars, are raised and released by fingers projecting from the shaft. The resulting sand is washed into a separator. It made quite a racket and we were told that at one time there would have been several such mills active in the valley. 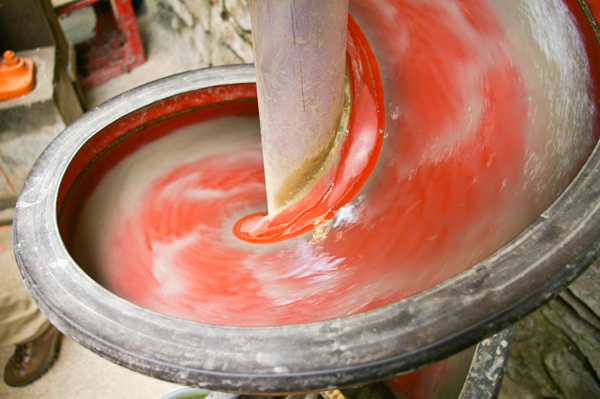 There are other styles of separators, but this one made the best image. As the mixture of water, tin ore and rock sand from the mill flows down this helical structure, the lighter (in color and density) rock is washed to the outside while the dark tin ore stays closer to the center. The ore is collected at the bottom of the chute and carried to the smelter. There are several steps that may be required to produce pure tin depending on the specific impurities found in the ore. Blue Hills is blessed with ore that is remarkably free of impurities, but it is still a multi-stage process.

When the tin reaches its pure crystalline form, small slivers of it can be bent and there is a characteristic crackling sound called tin cry. Click this link for a YouTube video that illustrates it.

The Blue Hills site that we visited was in the bottom of a deep valley reached by a road that was too steep & narrow for our bus. We got our daily exercise by first walking down and then back up! I took this picture of abandoned mine buildings at the top. There are very many throughout Cornwall. The above-ground buildings housed engines that powered pumps and mine access. 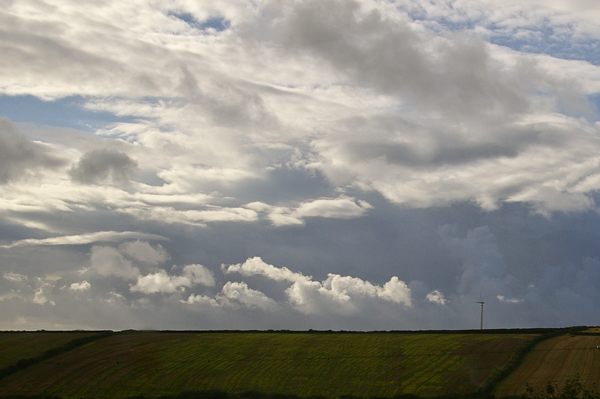 There is controversy in Cornwall over wind turbines. It is an ideal place for them: plenty of consistent wind with easy access, but many people are concerned about the effects on the views, about noise, and ironically, environmental damage. Before and after studies have shown that negative attitudes about wind farms decrease significantly once turbines are installed and the dreaded bad effects do not materialize.

I don't find that the turbines are intrusive – especially as seen here. Admittedly this is only one turbine, but that's only because I didn't get a decent picture of a larger grouping.

Would you rather have a wind turbine or a coal-fired power plant in your back yard? Which causes more environmental damage – a wind turbine or an open-pit mine? What kills more birds – wind turbines or global warming accelerated by burning hydrocarbons? OK, I'm off the soapbox for now. 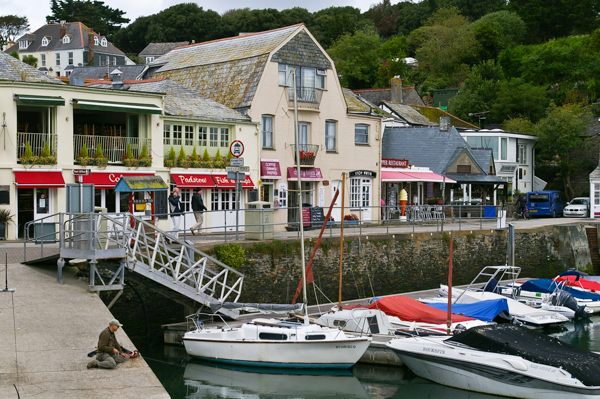 The following day the planned hike was from Trevone to Padstow. We bailed on the hike (again) and spent the morning putzing around the village of Padstow with a few others of our group.

Because of the tidal changes, Padstow has an inner harbor protected with a sea wall that keeps it at a constant water level. I expect boat owners pay extra for this service. The down side is that they cannot access the sea during low tide anyway. The presence of the fisherman on the boat ramp makes me think that fish manage to find their way in during high tides when the lock gates are opened.

The outer harbor at low tide. Boats are resting on the sand. The green stain on the concrete shows the height of the tide. In order to provide regular access to the boats the dock floats up & down with the tide. The next two pictures show the same spot. 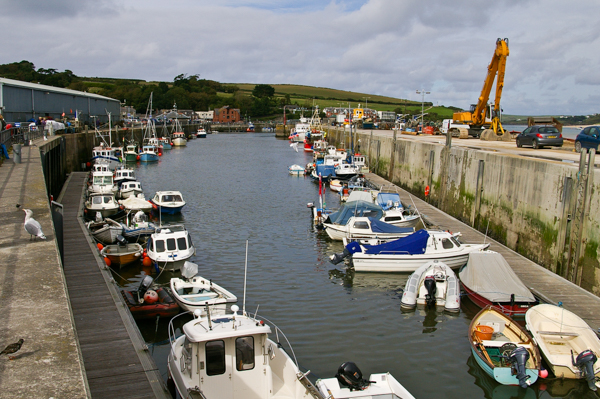 The tide is coming in. 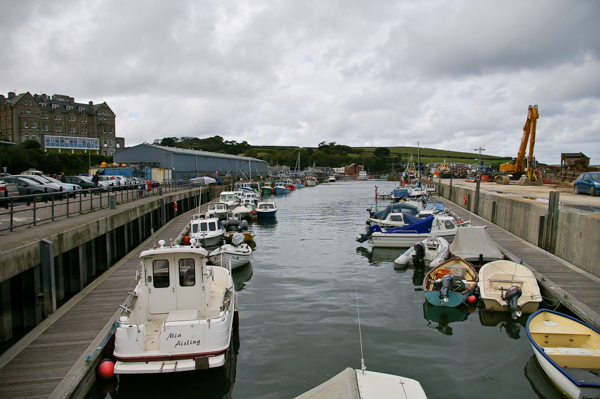 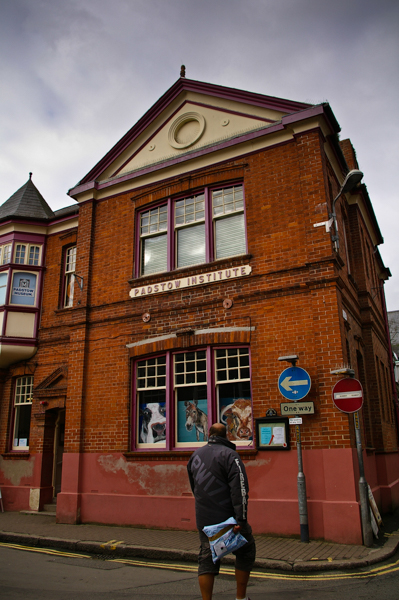 At the time of our visit, the Padstow Museum was in the Padstow Institute building, but it has now moved. It includes a significant discussion of the lifeboats and how they functioned. At St. Ives the lifeboat was kept on a trailer. At low tide here in Padstow, there is no way to get a boat out of the harbor. Back in the day, when a lifeboat was needed at low tide, the crews notified local farmers who came with their teams and wagons to haul the lifeboat overland to the spot where the sea was most accessible. It is ironic that the first challenge of the lifeboat crew was getting the lifeboat to the water!

Another exhibit covered the 'obby 'oss May Day festival. There are some videos at the link. Mardi Gras eat your heart out! There are actually two 'osses – one indicated by red and one by blue. 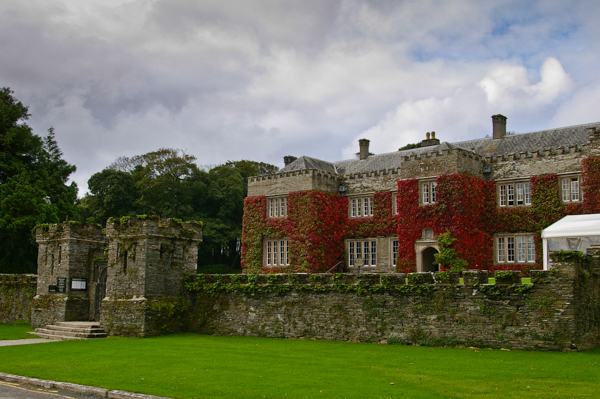 The high point (literally) of Padstow is Prideaux Place, an Elizabethan manor and grounds. Unfortunately our timing was off and when we got there it was not open for tours. Another couple in our group scheduled their arrival better and was able to visit the house and gardens. 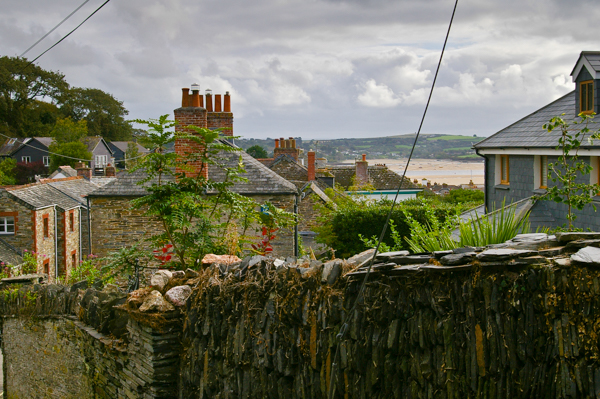 This view over Padstow rooftops shows the infamous Doom Bar, for which the ale is named, in the distance.

One Cornish style of dry-stacked stone fence can be seen in the foreground. The stones are slate and they are laid in vertical courses. 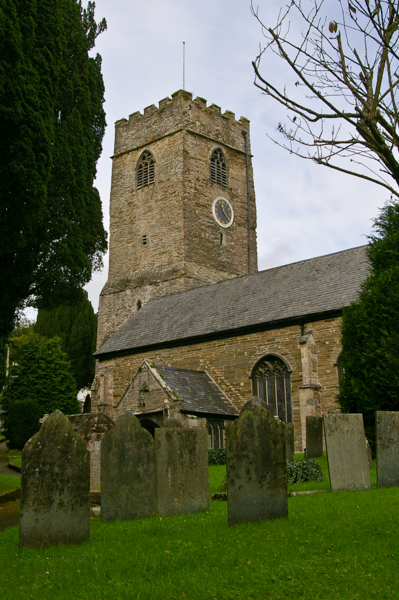 The local church is dedicated to St. Petroc. The original church was built in the 12th century, updated in the 15th, and again in the 19th centuries. It replaced an earlier Celtic structure. 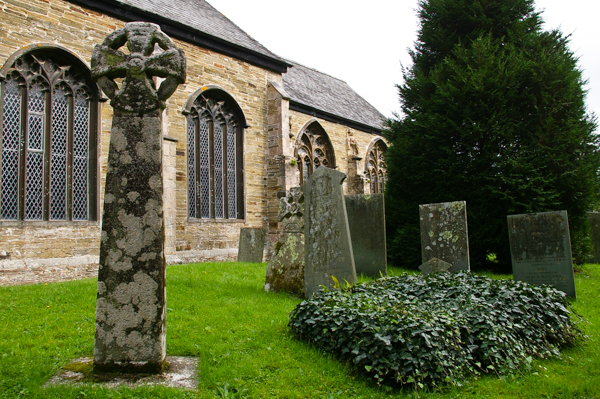 There is a surviving Celtic cross, perhaps from the 10th century, located outside the church porch. 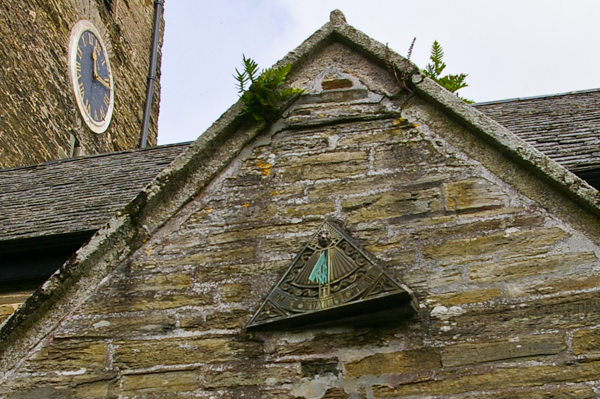 We frequently saw wall-mounted sundials during our travels in England, but this is the first one that has been carefully oriented – presumably correctly. All the others were just set up on the walls, perhaps as decoration. None of them gave the correct time (even allowing for summer time). Unfortunately the day was cloudy, so I couldn't tell if this one would give the right time either, but I bet it would. 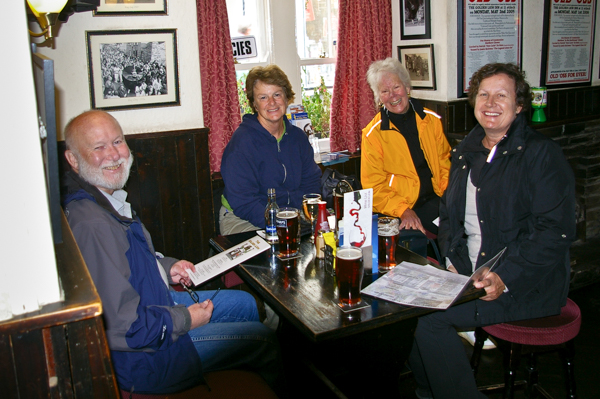 After our walk around town, the inevitable happened and we headed for the nearest pub on Jim's recommended list. This is the Golden Lion, the "stable" of the Old 'Obby 'Oss discussed above. The brew? Doom Bar, of course!

We are a happy group of (non)hikers, from left to right: Jim, Marsha, Jane and Susan.

In the fullness of time our hiking friends completed their walk and made it to Padstow. By the time they arrived, so had the bulk of the other tourists.

In the morning we had the town pretty much to ourselves, so we didn't regret our decision.

This view shows the Cornwall countryside with hedged fields leading to the harbors and the sea (actually the Bristol Channel) beyond.

Click your "back" button to travel with us across Cornwall to the south coast.