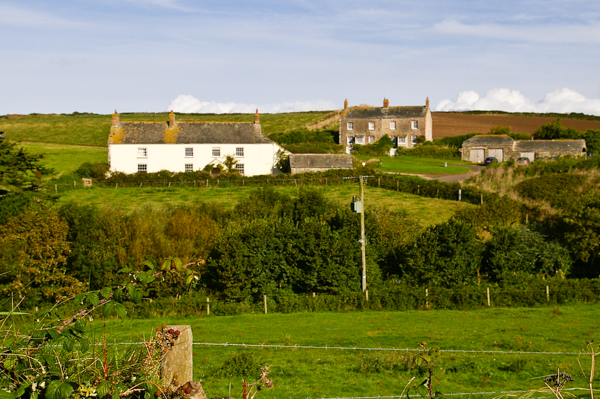 Our first day in Cornwall started with a walk from Pentire to Trebetherick along the South West Coast Path. Checking out the interactive map at the link, I found that our walks during the week were for the most part considered "challenging." That's certainly how I'd characterize them!

We accessed the coast path via this working farm. The style of the farms and villages has changed dramatically from the Cotswolds. Stone roofs are replaced by slate, which is mined in Cornwall. Houses are painted – sometimes in brilliant colors – or sometimes sided with slate shingles. 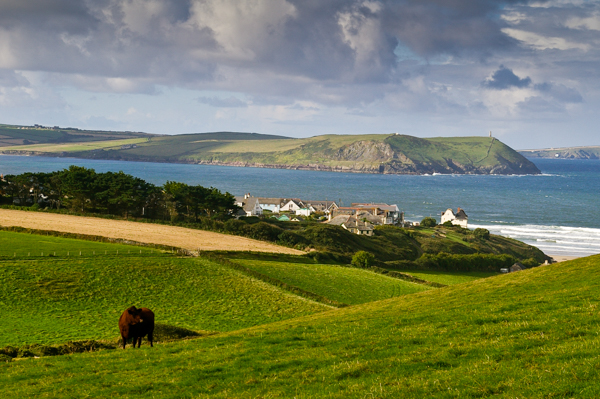 This village is our destination, but we won't be taking a direct route. Our walk will be five to six miles depending on a choice of an extra excursion. 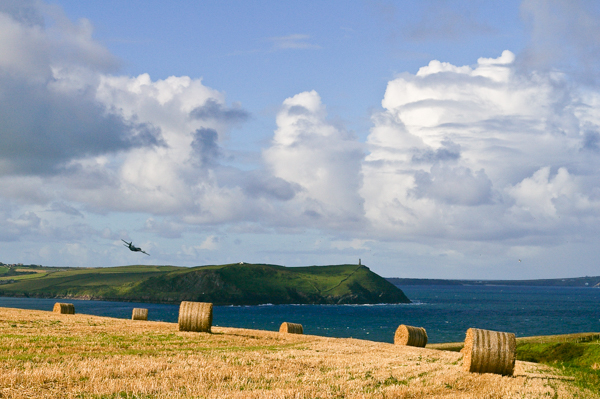 We were startled by the sound of a plane until we saw this aircraft, which had been flying out of sight behind the bluffs.

The building on the far end of the promontory is the lookout point. Villagers kept a lookout posted for schools of fish. When one was sighted, the fishing boats rushed out with their nets. Eventually the large schools disappeared due to over-fishing.

This lookout was also used to identify ships in distress. The lifeboat station is nearby. 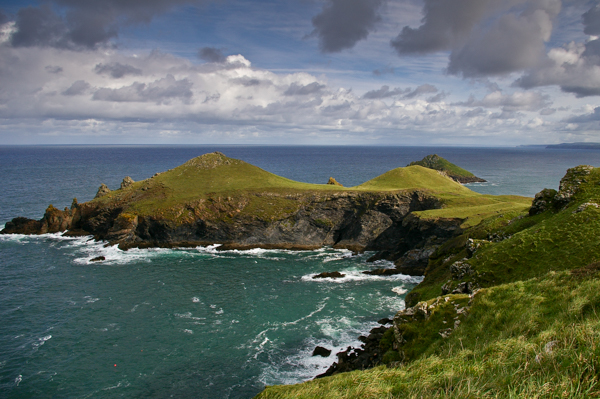 "The Rumps" is a twin promontory off Pentire Head. You can see the two humps, or cheeks as it were. (The third little peak on the right is a nearby island.) This is the site of an Iron Age "cliff castle". We had the option of continuing along the main trail or taking an excursion to the point. I elected to take the extra loop; Jim soldiered on with the main group. 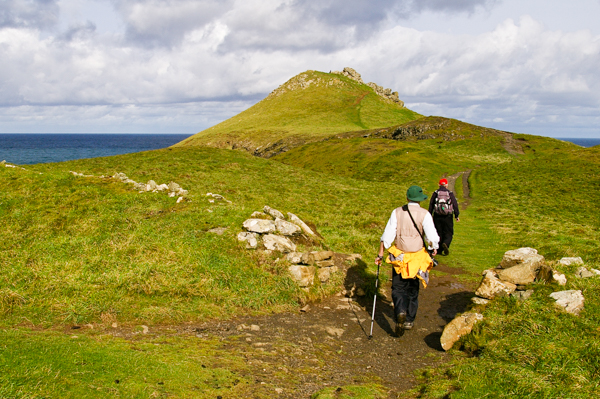 This bank was part of the ancient fortification of this area. I was disappointed that we didn't vist more Neolithic and Iron Age remains, but there's only so much time. 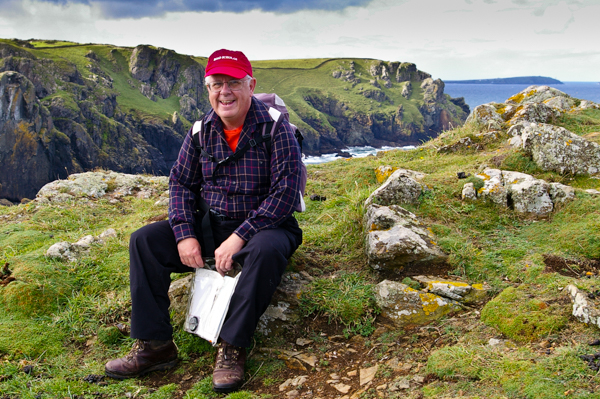 Guide "Rockin' Roy" taking a breather now that we've reached the highest point of our "rump" excursion. He had quite a collection of trail maps and other information in the packet so we had no worries about getting lost or going uninformed. His bright red Road Scholar hat was a great point of reference when we got strung out on a trail. 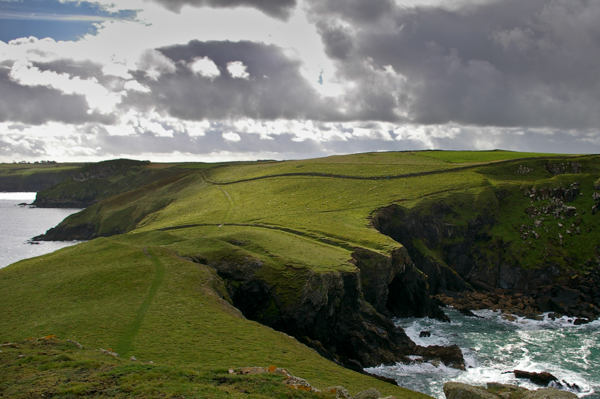 Looking back toward the headland it is easy to see the ditch and bank fortifications across the narrow neck. It's not clear to me if the earthworks, which would have been augmented with additional wooden palisades back in the day, were intended to protect from attackers coming from the land or the sea. I'm sure archeologists can decode these things. Now that we've actually taken the trip I need to recheck the suggested reading.

The "rump" party now has to scurry along the cliffs to catch up with the rest. 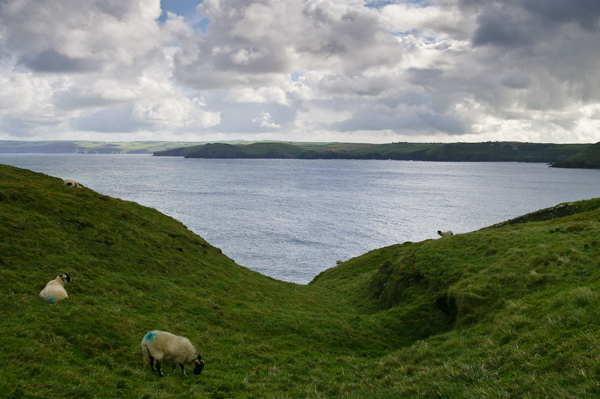 Sheep and other livestock are pastured up to the very edge of the cliffs. Note the blue spot on the rear of one of these sheep. When rams are introduced into the herd during the breeding season, they have dye containers strapped to their chests to mark the ewes they have bred. This ewe may have been making whoopee with some ram.

Alternatively we saw many sheep with dye markings on their shoulders or elsewhere. Roy said that these indicated that the sheep had been vaccinated (rather than the ram being terribly confused). Other sheep had distinctive dye markings that indicate ownership of animals turned into a common pasture – similar to our branding. 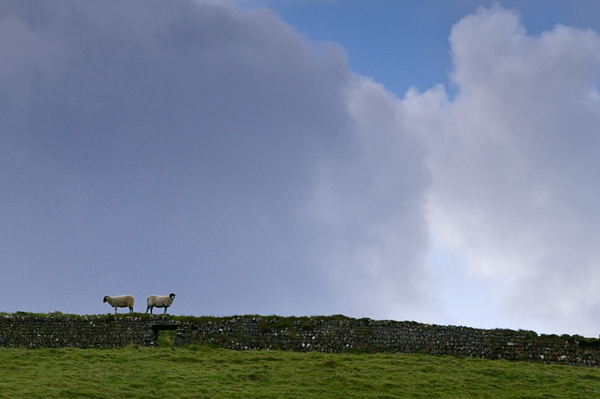 We were enthralled by these "sentinel sheep."

When we left the hotel in the morning it was raining. The day's forecast was for intermittent rain and potentially gale-force winds. Neither the rain nor the extreme wind materialized, I'm happy to say. All the weather provided on this day were photogenic clouds! 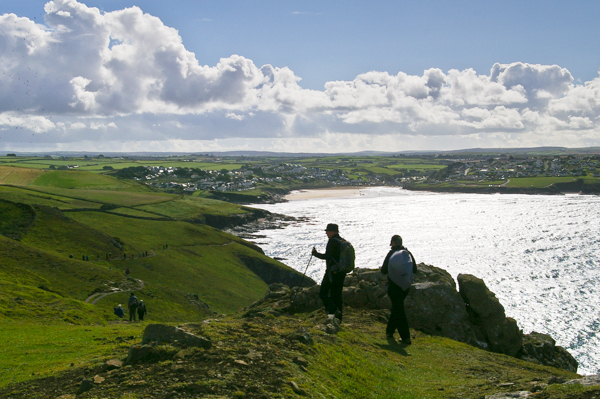 We're about to reach Trebetherick. As we neared the village we encountered many more hikers. We never did quite catch up to our "shore party," however, until we reached the village and the much-needed "loo" break.

The beach was populated by surfers and families enjoying the glorious weather. 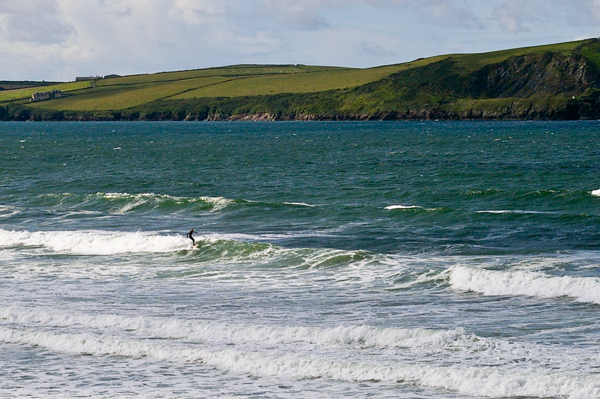 One of the surfers catching a nice wave.

The cliffs in the background were the scene for a hike later in the week. Neither Jim nor I opted to go on that particular walk choosing instead to explore the village at the base of the headland. 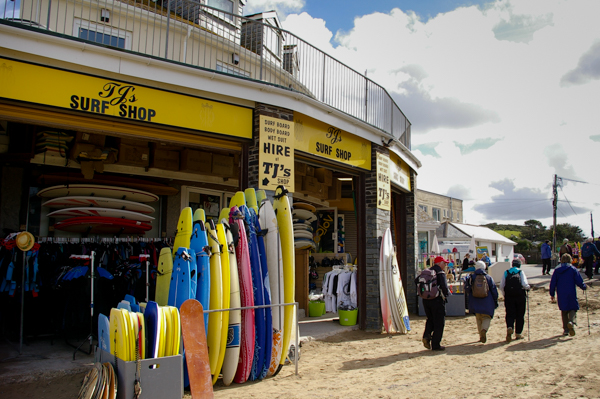 Somehow I don't think of Cornwall as a surfer's Mecca, but it clearly is. This is not the only location where we found good surf and people enjoying it. The prevailing stiff wind also made the coves and beaches attractive to wind-surfers and parasailers. 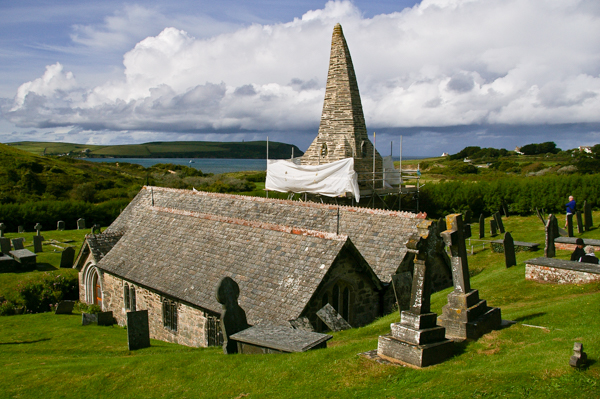 The village was not our ultimate goal for the morning. Instead it was this little church, St. Enodoc. It was built in the 12th century, later buried in sand dunes, and restored in the 19th century. It was undergoing renovation at the time we visited so we couldn't go inside. Instead we scattered among the tombstones and enjoyed the box lunches that we had carried all morning in our packs.

The former poet laureate of England, Sir John Betjeman is buried in this churchyard. He spent much of his life in Cornwall and wrote about it many times in his poems. After dinner this day members of a local theatre company joined us to discuss him and read some of his poems. 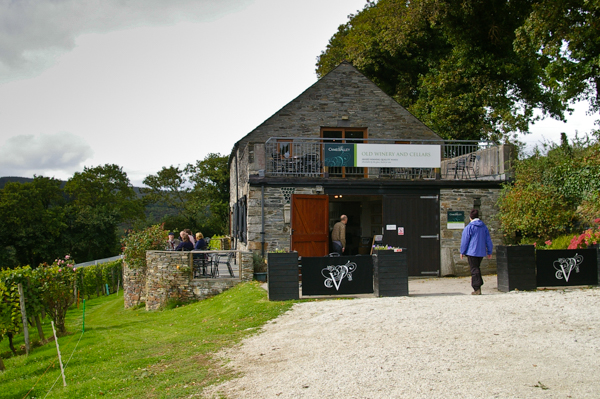 After our visit to the church, we found our bus only a pasture away. We loaded up for a trip to the Camel Valley Vineyard and Winery. We had never heard of Cornwall wines, but were pleasantly surprised. The climate limits the varieties that can be grown, but the winery has done well with them. Their winemaker gave us perhaps the best winery tour we've ever had. Her explanation of the methods used to produce sparkling wines was terrific. 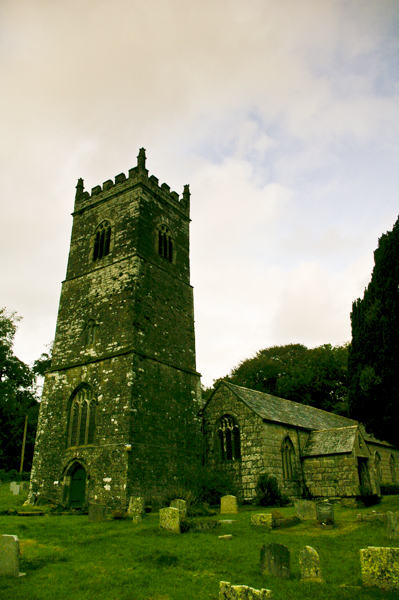 Our hotel in Cornwall was the family owned and operated Lanteglos Country House Hotel. (Lanteglos is pronounced lan-TEG-los). I didn't get any decent pictures of it, so if you want to check it out, click on the link. It was a delightful place.

Just across the road is this church dedicated to St. Julitta. According to information at the link, the church was Norman, but rebuilt in the 14th and 15th centuries. There is a list of rectors posted inside the church with the first one taking office in 1275. And my church back home, one of the oldest in Lexington, states proudly "since 1789!"

Presbyterians don't venerate saints, but many of the dedications we encountered were completely unfamiliar to me such as Sts. Enodoc & Julitta.

Click your "back" button to continue on to St. Ives.