En route to Cornwall for our week of hiking there, we stopped at the cathedral city of Wells for lunch and a visit to the cathedral. There was of course, much more to see than could be fit into the brief time we had there.

I could never find a good place to photograph the entire exterior of this wonderful building. This shows the front, but the tower over the transept is invisible behind one of the front towers.

The bishopric migrated between Wells and Bath from the end of the 10th century to the 13th century when it finally settled at Wells. 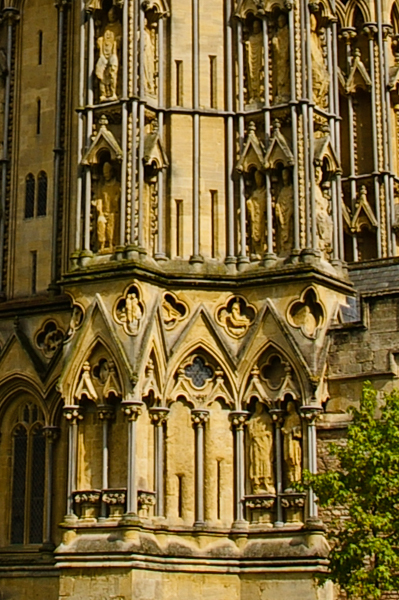 The official name of the church is the Cathedral Church of St. Andrew. It was dedicated in the early 13th century, although construction started much before then. It is located on the site of an 8th century church.

I'm not sure why I neglected to take more close-up views of the detailed facade, but I didn't. Perhaps I was too focused on getting a picture that included that pesky tower. Almost all of the dozens of niches contained a statue. The lower rank of niches is mostly empty. Since these would have been easily accessible, the statues were probably destroyed during the Civil War. 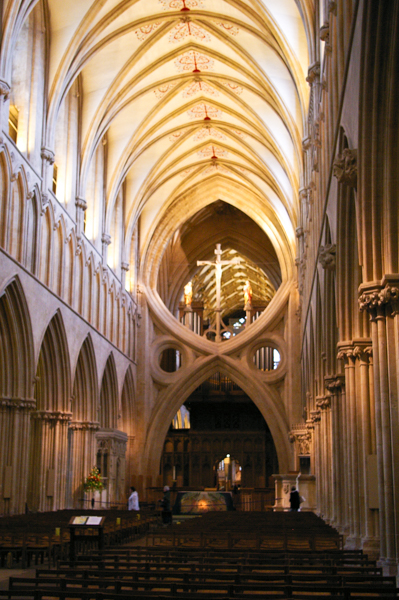 The nave of the cathedral features striking arches called "scissors arches" or strainer or straining arches. The design looks modern, but medieval engineers introduced them in the 14th century to support the tower, which was in danger of collapsing.

The delicate tracery on the ceiling can just be seen in this image. 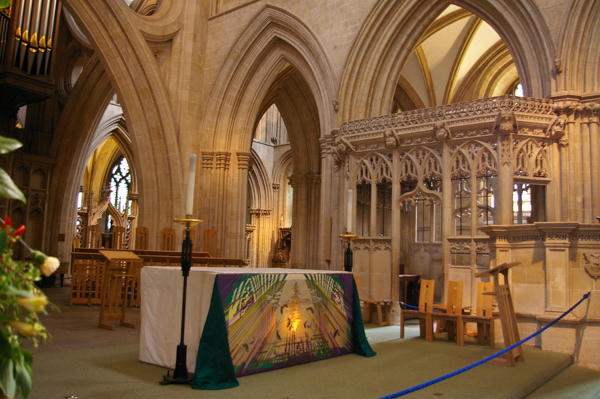 I liked the juxtaposition of the modern embroidery in the medieval surroundings. 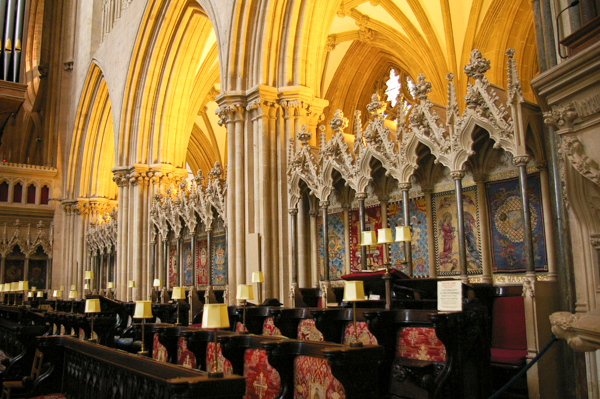 The choir features ancient embroidery. Even those who had photography permits (yes, I did!) were admonished not to use flashes in this area.

We asked one of the cathedral priests, who was working nearby what the purpose of the various parts of the church were. He pointed out that the large nave was used primarily for processionals on, for example, the harvest festival. The choir is used for regular services and there is usually enough space for the local parishioners. 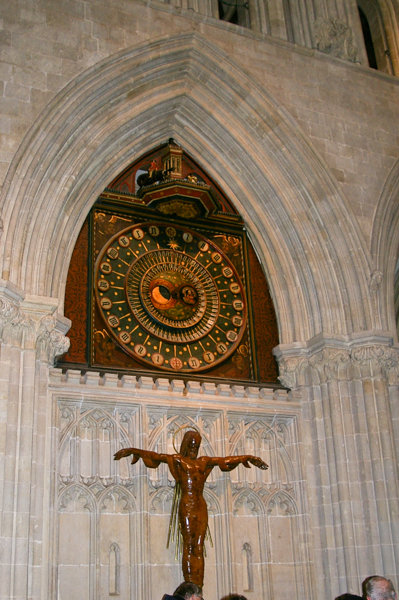 The clock is one of the oldest in the world still in use and dates to the 14th century (the original movement now resides in a museum where it continues to operate). We just missed seeing the automata above the dial rush around on the hour. 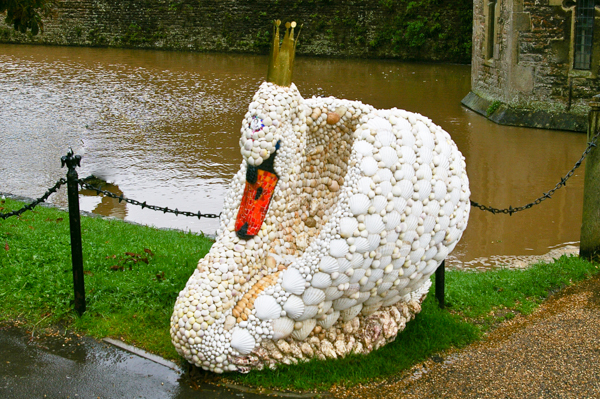 In honor of the Queen's Jubilee individually decorated swan sculptures were displayed around Wells. This one was in residence at the Bishop's Palace. Shortly after our visit the swans were auctioned to raise money for charity.

I finally got a shot of the cathedral's tower from the market square. I'm standing in front of the Crown pub where we had lunch & a pint. A sign on the door announced:

This is a Pub.
We have many flat surfaces for you to sit on.
You can drink tasty liquids from see-through conical vessels...

After our too-short stay in Wells, we were back on the bus to complete our journey to Cornwall. Click your "back" button to continue with us.