After almost a 20-year hiatus from fiddling, I picked up my instrument again earlier this year. I dug out the music and other materials that I had saved all that time, much of which focused on the Scottish fiddle tradition. Google showed me that the Jink & Diddle school was still around and a query confirmed that they had room for a beginner. So I signed up and what an experience it was! 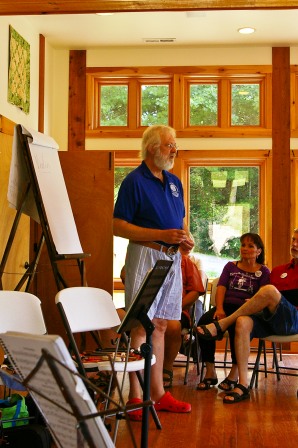 John Turner, a composer and a performer of renown, is the founder of the Jink & Diddle school.

As a beginner I did not participate in his advanced classes, but I very much enjoyed his sessions on "knowing your fiddle" and "the violin in Scotland."

This was my first experience with this school and I was thrilled with the level of instruction and passion - particularly in the young people.

It was a very special week.

The school is held at the Valle Crucis Conference Center outside of Boone, NC. 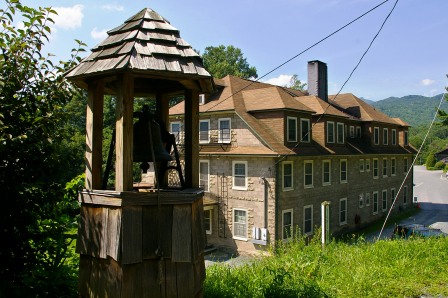 Most of the buildings at the center are on the National Register of Historic Places and NONE of those are air-conditioned. Even though many places here on the East Coast had record-breaking heat in July, 2011, it was (barely) tolerable up in the mountains. I stayed in the Inn, which is pictured.

The bell in the foreground signaled meals. The food was good and plentiful, but we got lots of exercise to make up for it! 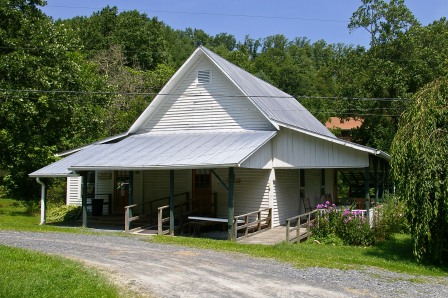 Melinda Crawford (link opens in new tab), who taught the "level 1" students, had her classroom in Crab Orchard Hall. The store was also located in one room of the hall.

The porch on the right was a great place to hang out in the shade and chat. There was usually a nice breeze too. 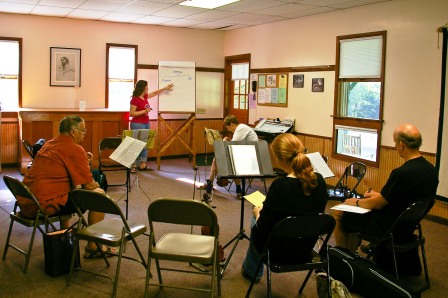 We were a small group and even though we may not have ripped through a million tunes a day, our level 1 group had fabulous discussions about how to "read" a tune in order to ornament it properly and (very useful information for me) how to contribute musically to a session when you're unable to keep up with the more advanced players. There are many ways to play along constructively without trying to get all the notes at ninety miles an hour. 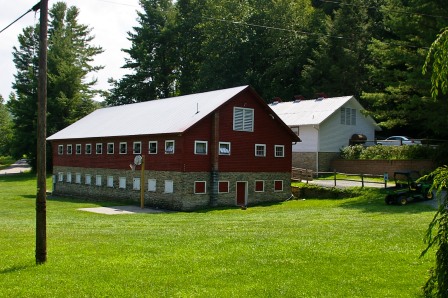 The Apple Barn was the scene of many of our activities - including the daily level 1 & 2 combined classes, Scottish Country Dancing classes, and the evening sessions with all students and the special evening events. 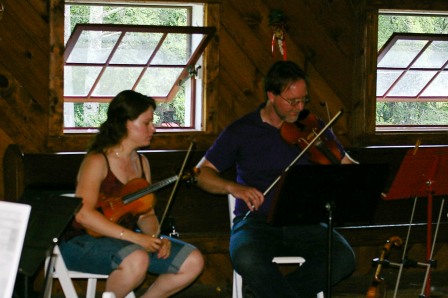 Every afternoon the level 1 & 2 groups enjoyed a combined class with Melinda and David Gardner.

The classes were enlivened with David's jokes and the numerous opportunities for me to practice the coping skills on my fiddle as the other students took off on the reels, jigs and strathspeys.

The class also featured discussion as the instructors described and demonstrated stylistic ornamentation, rhythms and such like. 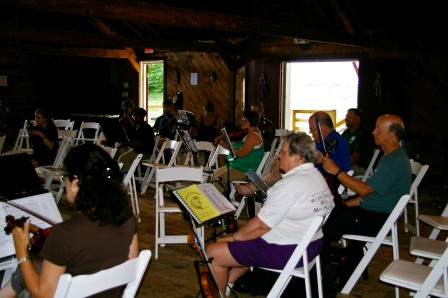 We used a variety of music in these sessions: the 18th century Duncan MacIntyre collection, the "2011 Book O'Tunes," which contains original music by Jink instructors and students, and the "Rally Book," which contains a large variety of Scottish tunes from many sources.

The lady in the white t-shirt is Juanita, who was my assigned roommate. She is a long-time Jinker and Scottish Country Dancer and graciously shared her knowledge and experience with me. 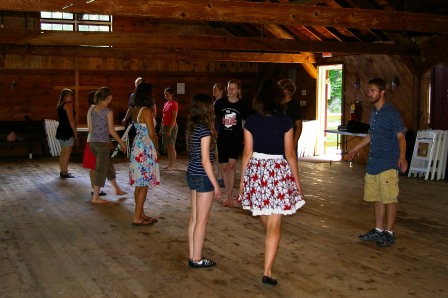 Another daily feature was the Scottish Country Dance practice. We were looking forward to the "Lichted Ha' Ball" to be held on Friday night.

There was a wide range of experience in the group from the complete beginner (that would be me) to skilled dancers. It was interesting to see how the group composition changed during the week. Eventually we had more dancers than musicians, but we never did get parity between women and men. To see a cute poem on this common problem visit scottishdance.net and look for "The Two-sex Scottish Dancer" at the bottom of the page. 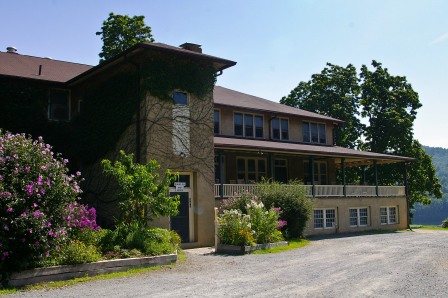 I must include a picture of the dining hall as it was a focal point of the week. The food was plentiful and good, although there was one problem.

I was told that it was a tradition to have fried grits one morning. I waited with eager anticipation all week ... and ... no fried grits.

You may have to be southern to appreciate the disappointment. 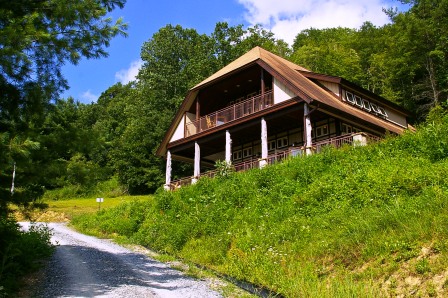 The advanced classes and several of the special topic sessions were in this striking hall named after Bishop Johnson. Unfortunately at least a few people were reluctant to make the extra climb to get there.

By the end of the week I was more sympathetic. There was a lot of walking and climbing! And it seemed like I always needed something that was at the opposite end of the hill! 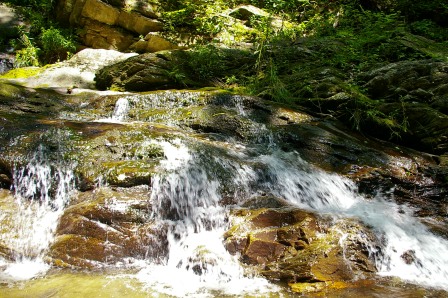 One afternoon I had enough fiddling and decided to hike up to the scenic waterfall on the property. It was a beautiful walk, but I really should have worn something other than thong sandals.

The cascade itself was only part of the attraction. It would be wonderful to make the hike with a naturalist who could describe the various plants. I was able to find some of them online. 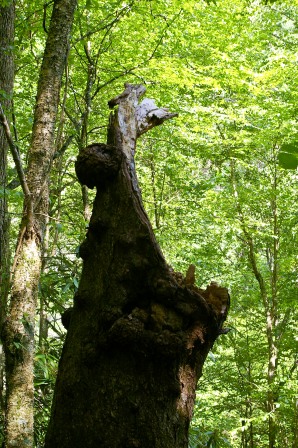 One of the first oddities I saw in the valley of the waterfall was this snag that reminded me of a hippo roaring out a challenge.

From the opposite side this same snag looked like a model that Peter Jackson might have used for the Ents in the Lord of the Rings films. Alas, the picture from that angle just didn't come out right.

I was grateful for every photo opportunity that gave me a chance to stop and catch my breath on a fairly steep trail.

This tree snag was the only large feature. Most were quite small. 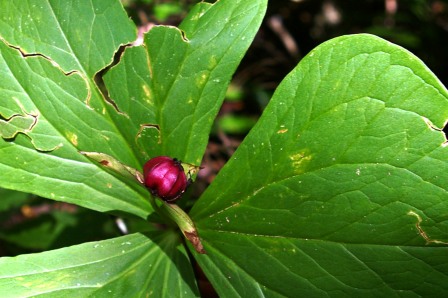 I had never seen a trillium fruit before. I've searched the web in an attempt to identify exactly which variety of trillium it might be with no success.

Many of the woodland plants were either just past their bloom or just about to bloom. I did capture a few, however. 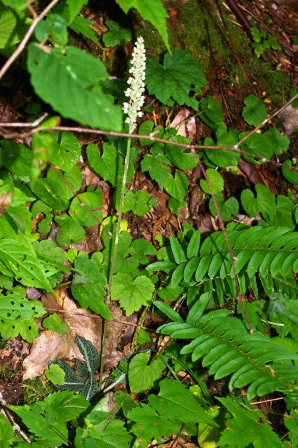 This striking plant was about one foot tall. The white flower stalk towers above the veined leaf whorl close to the ground. It is a type of native orchid. 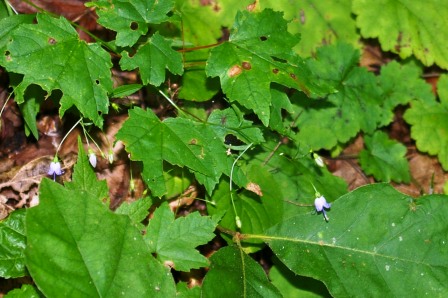 These tiny blue flowers on slender stalks are Southern harebell or Campanula divaricata.

They were usually in masses of delicate blossoms, but most of them were too far from the trail to get a picture. I hated to go trampling around, squishing who knows what. Maybe snakes. 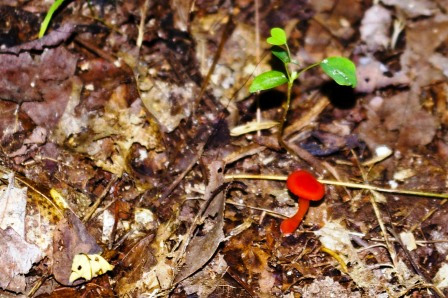 Another tiny marvel was this teensy (maybe 1/2 inch tall) brilliant red mushroom. I haven't been able to identify it at all. 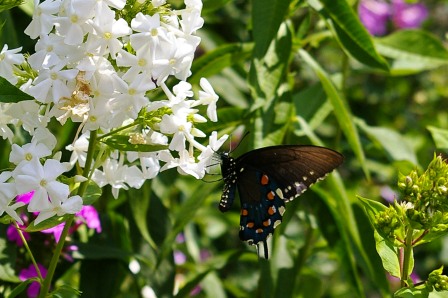 Back at the conference center I snapped a picture of what appears to be a Pipevine Swallowtail feasting on the garden phlox nectar. Apparently there are many species of similar butterflies, so it's hard to be certain which one this really is.

But my nature walk was only an interlude in the midst of Scottish culture.

On Friday night we had the long-awaited "lichted ha' ball." We were joined by those who came up for the second week of Jink and dancers from the local Scottish Country Dance club. Unfortunately it was another steamy night and many who had planned on wearing 18th century dress wisely opted for 21th century comfort.

The influx of skilled dancers was a real benefit for this beginner. I was even able to complete a reel successfully! 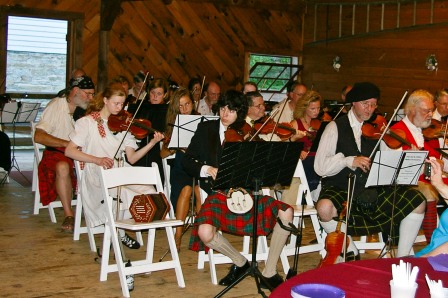 The orchestra didn't quite outnumber the dancers - especially since many of the players took their turns on the dance floor.

I sat in on one of the rehearsals earlier in the week and decided that however complicated the dances might be, the music was far more complicated. The leaders were counting measures to make sure that the music would stop at the same time as the dancers. 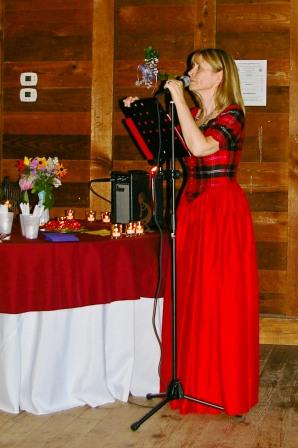 Since this album started with John it is fitting that it end with Moira Turner, who is a certified instructor for the Royal Scottish Dance Society.

She not only skillfully taught our dance workshops, but also organized the store, handled registration, scheduling, food for the special events and I don't know what all else.

Thanks to John, Moira, Melinda and David for a terrific week!

Plus I don't want to omit Colyn Fischer and Rachel Barton Pine, who taught the more advanced students. They were also an inspiration, albeit from afar!