Every spring Jim's Rotary district has their district meeting at The Homestead. He sits in meetings all day and I and hike the miles of lovely trails. The exercise enables me to enjoy the food without putting on (too many) pounds. 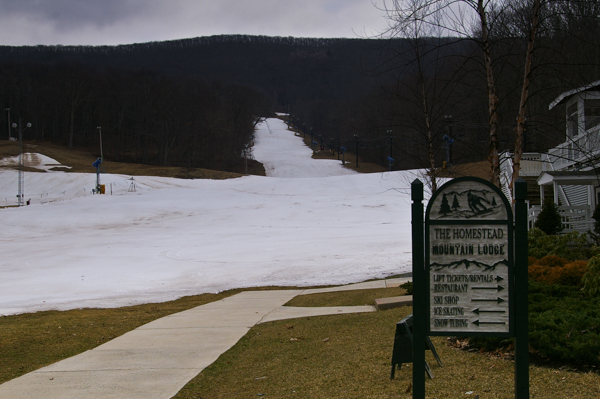 We arrived Friday morning. I had planned to take the guided Cascades Gorge hike, but heavy rains earlier in the week had flooded the path. So I grabbed a map and headed for the local trails.

The first point of interest was the ski area, now closed for the season.

This is one of the oldest VA ski areas. I remember in college hearing others make plans for weekend ski trips to The Homestead. At that time I had not caught the bug. 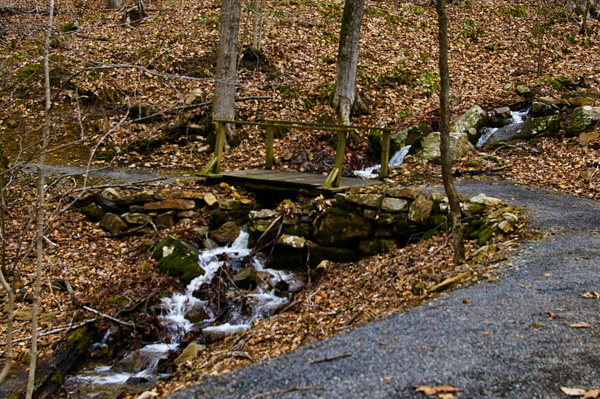 The resident naturalist suggested that I stay on the South Trail due to the muddy conditions, but I had hiked it on an earlier visit. I sought out the North Trail instead.

It was a cold windy day with occasional snow showers. I was glad to be in the woods much of the time.

Because of the recent (and much needed) rain, all of the mountain brooks were in full babble mode.

In a couple of places the trail was doubling as a stream bed, hence the naturalist's warning. The water was never deep, so I picked my way without getting my feet wet.

After a while the trail came out of the woods and along the golf course. The views were nice, but the wind was wicked. I was glad when it ducked back into the forest.

Although the Homestead was founded in 1766, most of the existing facility was built in the early 20th century after a fire destroyed the older hotel building. 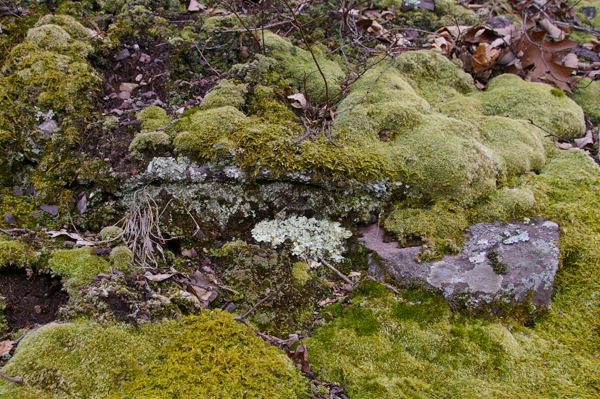 The North Trail connected with the Deer Lick Trail. I had been specifically warned against this trail both because of the climb (750 feet vertical) and the wet ground.

Yes, it was a stiff climb, but after slogging through muck for the first 50 yards or so the trail was fine.

Not so much greenery this early in the spring, but there were numerous varieties of moss and lichen along the path. 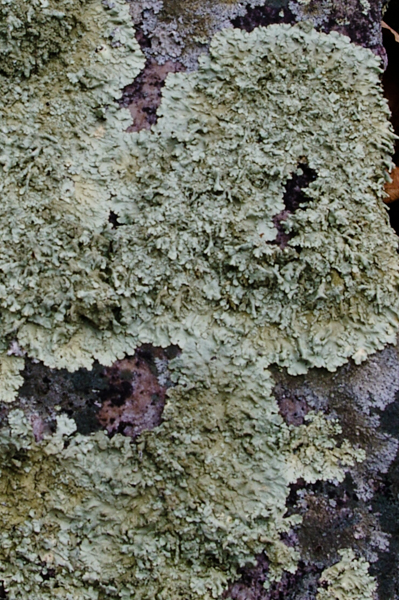 There were some impressive lichen colonies.

The next day my guide for the Cascades gorge told me a great story for remembering the composition of lichen: Freddy Fungus and Alice Algae took a "liken" to each other and lived happily ever after. 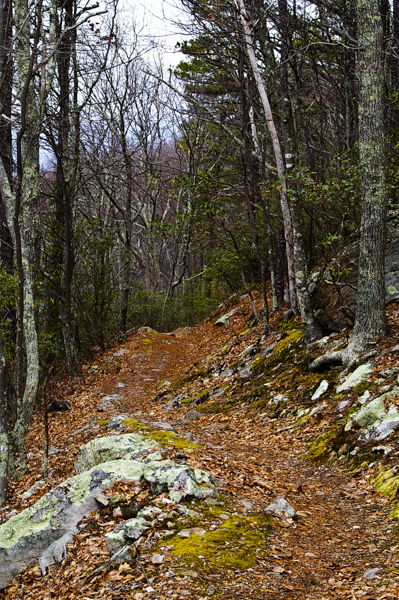 The path was dry and rocky as it wound through the trees. At one point I puffed through a steep part. A runner came up behind, politely greeted me and trotted past.

Well, he was a lot younger! And no doubt MUCH fitter. 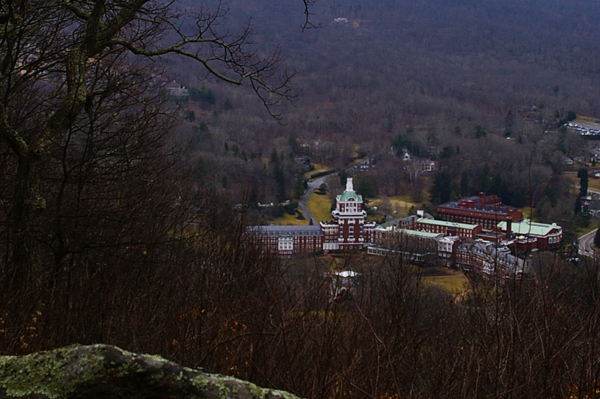 This overlook was as far as I had time to spend on this trail. I'll have to save the rest for another trip.

This is a popular spot to see the sunset light up the Homestead and the mountains behind. On this cloudy day there was no hope of a sunset and besides, I had a date to keep with Jim.

Even with the switchbacks some of the steeper sections took a toll on my knees going down. It's always harder to go down than up in my estimation.

This was a lovely way to spend the afternoon – and there was the Cascades hike to anticipate for the next day.

It certainly was nice to get inside and warm up though. 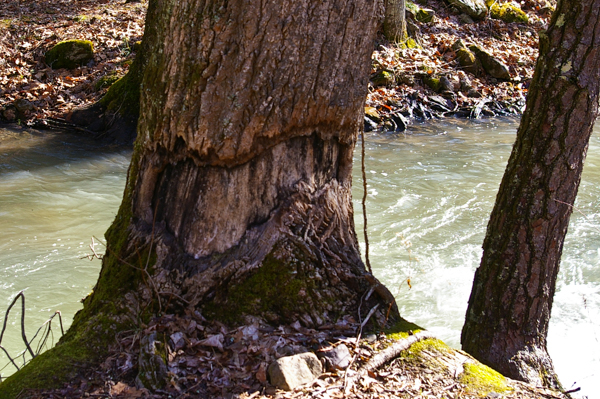 The next morning dawned chilly, but the sky was blue and the wind had died down.

The Cascades hike was a go. Since I had a time constraint on this day, the lead naturalist arranged a separate guide for me thinking that we could go quicker while he took the larger group.

We started at the lower part of the cascade where there had been a beaver lodge & dam. The recent rains washed away the dam, but beaver activity was evident along the stream. 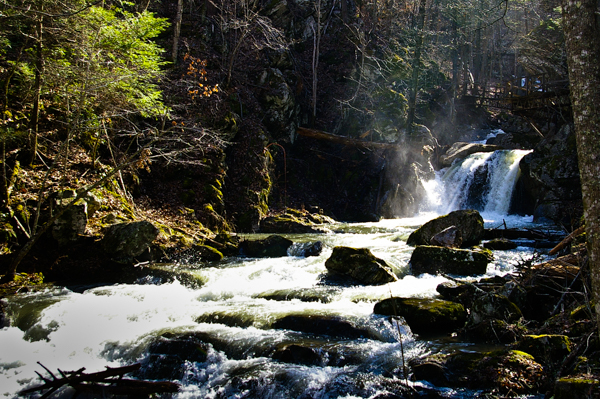 As we climbed we saw other evidence of beavers. But a natural landscape is always changing and it is pointless to blame the beavers for doing what beavers gotta do.

I had to recall, however, when beavers colonized the Washington Tidal Basin to the detriment of some ornamental cherry trees. Not much "leave the beavers be" sentiment there! Their removal prompted a not-so tongue-in-cheek protest by Rep. Helen Chenoweth of Idaho.

No one knows when the gorge began to be visited by tourists, but there are pictures of Homestead guests dating back to the late 19th century.

The resort maintains walkways at places where the rocks don't allow for a path.

One advantage of visiting in the winter or spring is that the surrounding rocks can be seen without the shade and vegetation. There are places, for example, where we could see fossilized shells left when these sedimentary rocks were formed millennia ago.

All times of year have their own particular beauty, and I'd jump at the chance to visit in every season. 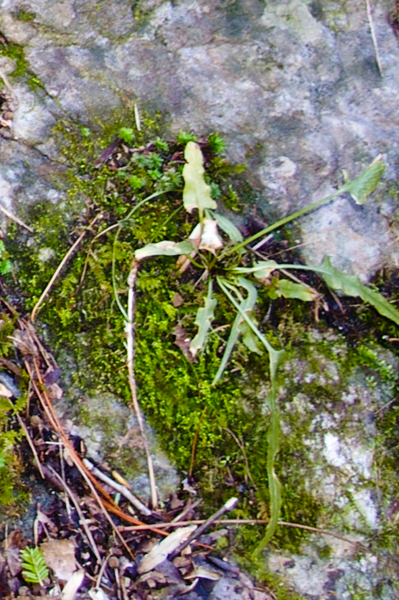 This unassuming little plant is a botanical marvel: a walking fern.

Unlike most plants which stay, well, planted, this little guy uses vegetative reproduction to migrate across territory. New clones sprout where the lance-like fronds touch a suitable habitat.

Additionally, like most ferns, it uses asexual reproduction by the use of spores.

Although the resort advertises "13 waterfalls" in the gorge my guide said that technically it is a single cascading waterfall extending over a considerable distance. Whatever it's called, it's lovely throughout.

The path was no longer flooded although we had to skirt one place that was under water. The flow is considerably higher than normal. 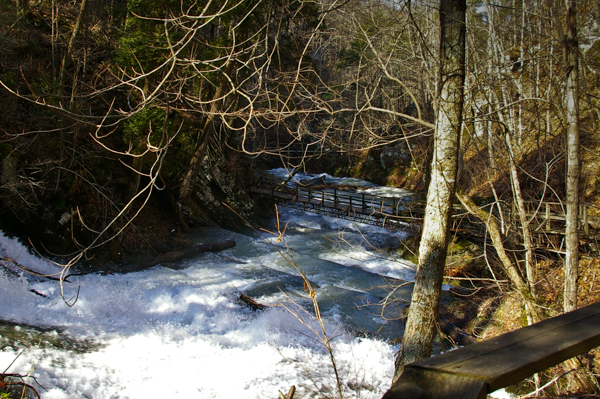 Like ski slopes, whitewater looks scarier from the top looking down. This view is looking down from the top of the two previously pictured cascades. It doesn't look nearly as tame in this view.

The mountains of Virginia have been infested with the woolly adelgid, an introduced pest destroying native hemlocks. It may turn into as dramatic an upheaval as the chestnut blight of the 19th century.

The death of the hemlocks is changing the ecosystem in the gorge by allowing more light and more undergrowth.

Vigorous research continues to explore ways to control this pest. 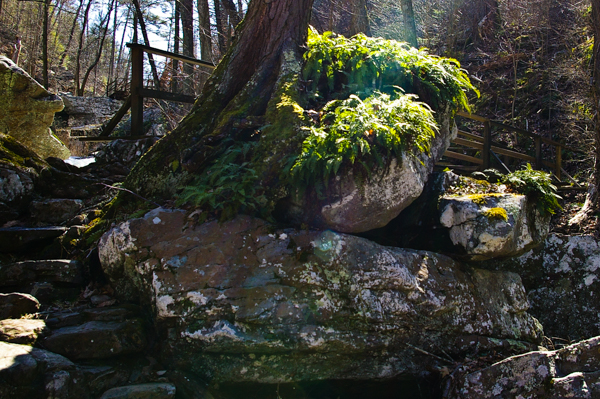 Nature has created a lovely garden in this gorge with little help from humans. My guide and I shared memories of people who have attempted to produce "natural" gardens without success because the selected plants just didn't like the places they were put.

This shady and damp region of the gorge is favorable for moss and ferns. Other areas had rhododendron, mountain laurel, and other plants with specific requirements. 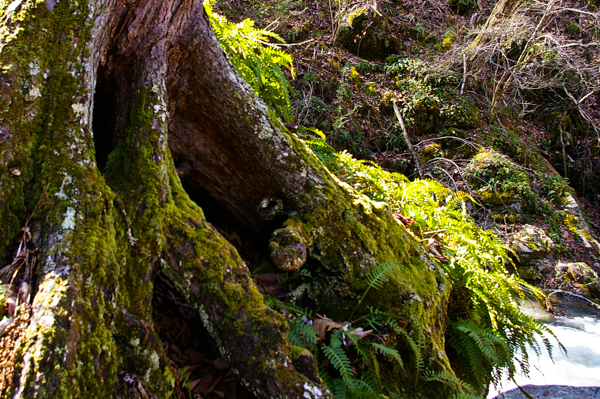 A close up of the tree in the previous picture.

It has had to struggle to find a toehold for its roots, but these roots will break the rock apart over time to find nourishment. 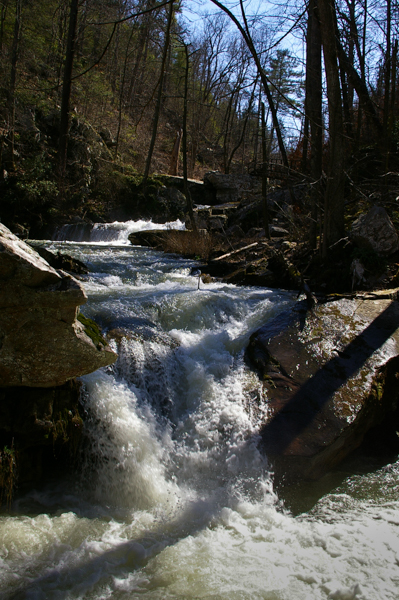 There was one picture I wish I had taken. My guide pointed out a little willow tree, maybe 18 inches tall, he had discovered as a tiny sprout some years before. It was growing in the crevice of a rock.

Over the years he had seen it put out tiny roots over the rocks in search of nutrients. Many of the roots had died from exposure; others found a congenial environment. Someday, if it lives, it may look like the tree in the picture above.

Or it may grow large and fall over pulling the rock with it, which would require the Homestead to rework their path!

Meanwhile, the beauty of the gorge continues. 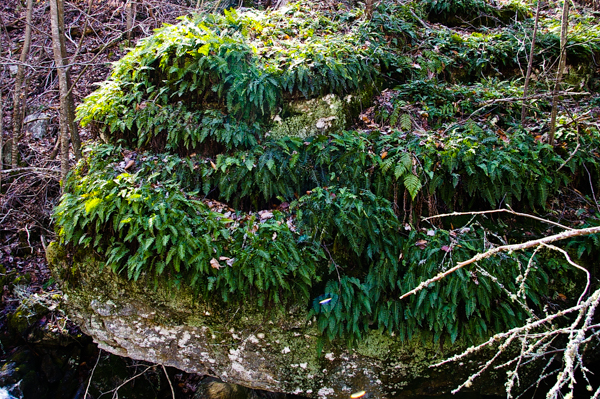 Ferns have colonized every surface of this rock that is capable of holding a little soil. 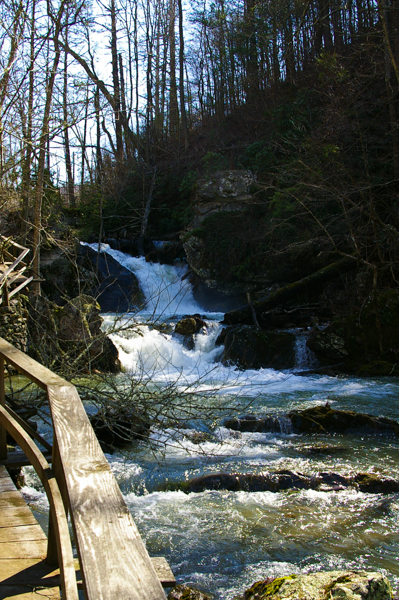 We are nearing the top of the gorge. We were supposed to make the trip faster than the larger group. Didn't happen. We spent so much time looking and chatting about what we saw that the others caught up to us right about here. 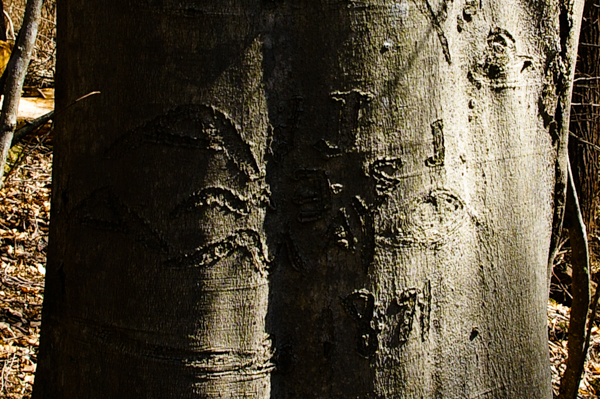 In May of 1871 someone felt compelled to carve his or her initials in this beech tree. Subsequent growth has distorted the letters (check how the "M" has spread out), but the 1871 date is quite clear. 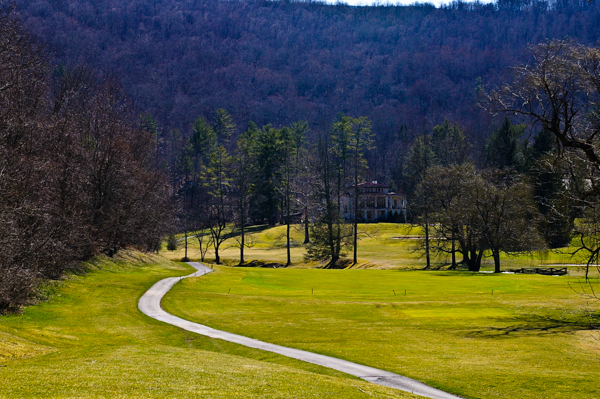 The Cascades golf course is at the top of the gorge. The clubhouse, an Italianate mansion, was once the residence of stockbroker Jake Rubino. He sold the land containing the location of the course to the Homestead in the 1920s.

The stream running through the gorge is spring-fed. The source of the spring is the hillside out of sight to the left in this photo. It descends through the golf course in a series of lakes before tumbling down the gorge.

The base of the willow shows fresh evidence of beaver munching. There are plans to protect it with chicken wire.

This was the end of our gorge hike. 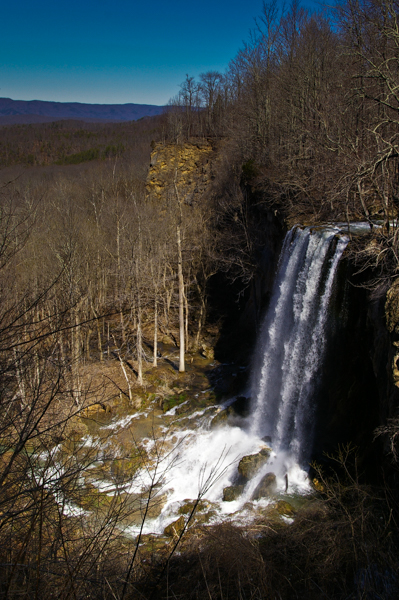 After leaving the Homestead the following day, we drove toward Covington. This waterfall, known as Falling Spring Falls, is located by the highway.

The stream, according to a display at the site, once had a slightly different course, which led over a 200 foot drop, but mining operations forced its relocation to the current position where the drop is only 80 feet. It is still impressive, but imagine more than double the height!

We wanted to drive through Covington to stop at a favorite Mexican Restaurant – San Juan. Yummy good!