We left the Falkland Islands on 1 March and arrived in South Georgia on 4 March. For a great overview of South Georgia history plus some fabulous pictures, check The Encyclopedia of Earth website. 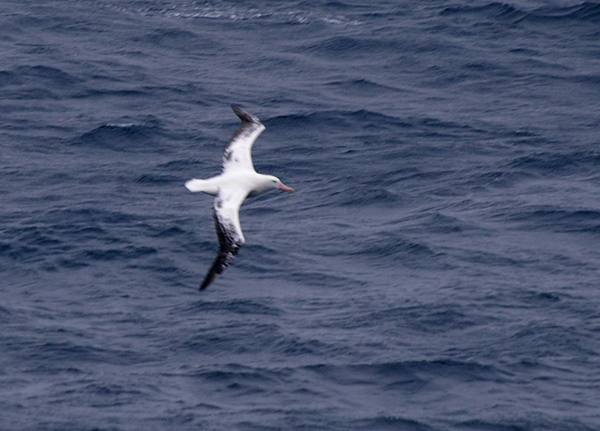 While at sea, in addition to lectures, films and the excellent food & drink, we also enjoyed watching the sea birds and a few sea mammals.

The Wandering Albatross is the largest flying bird with a wingspan of up to 12 feet. (Scale is hard to judge at sea.)

Shag Rocks are rocky prominences rising from the depths of the South Atlantic.These six small islands, inhabited only by sea birds, are located on the South Georgia ridge south of the Antarctic Convergence and 150 miles west of the main island.

This picture shows why we didn't have great star-gazing conditions.

The still picture is deceiving – the ship was bucking here! One of our fellow travelers sent us a video he made of these rocks. He was having trouble keeping his feet while holding the camera! 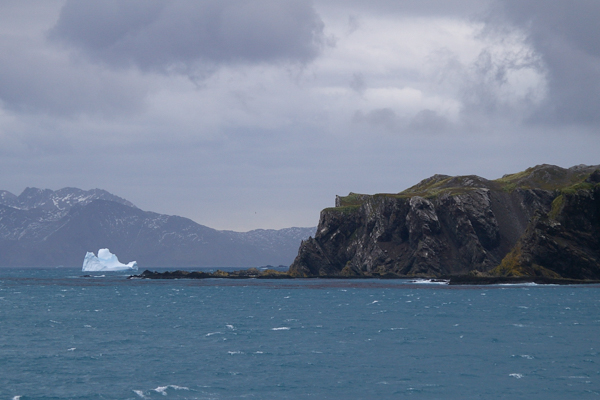 When we reached South Georgia, our planned stop in Right Whale Bay was unsafe for landing due to high winds, but we had a successful visit to Prion Island in the Bay of Isles.

Our landing site was on the far side of this point. It was not a dry landing! 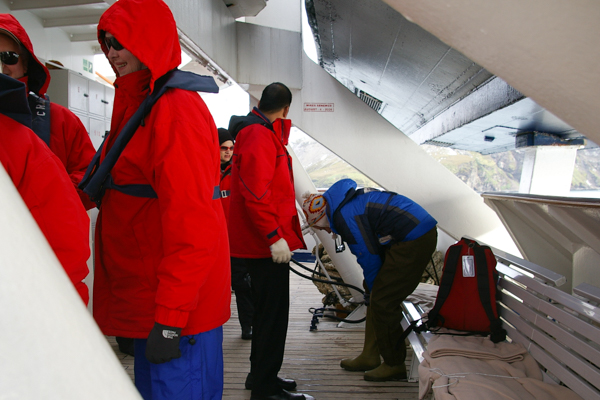 One of our tasks during the days at sea was scrubbing down our clothes for South Georgia landings. We had to remove any seeds caught in cuffs or seams – especially Velcro fasteners.

Prior to all our "wet" landings we prepped in the stern of the ship where our boots were stored in lockers. We then waded through disinfectant solutions before climbing into Zodiacs. Repeating this procedure on our way back ensured we carried no germs from one site to another. 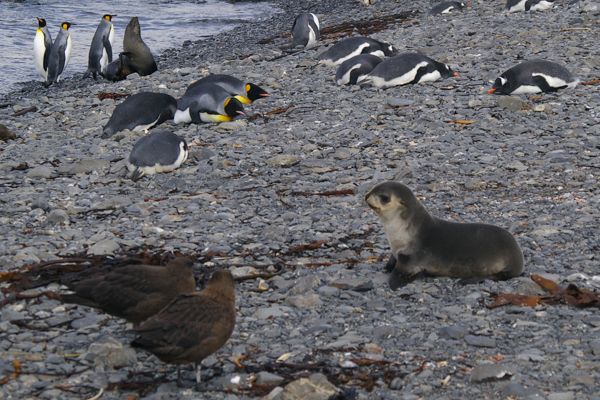 Our Zodiacs landed on this cobbled beach populated by Southern Fur Seals and a variety of penguins and other birds. All the seals were females and well-grown pups. The males had already left for parts unknown.

The various animals tolerated each other well and (usually) us. The seals could be aggressive -- perhaps they haven't forgiven humans for hunting them to near-extinction. I wish we humans could get along as well with each other. 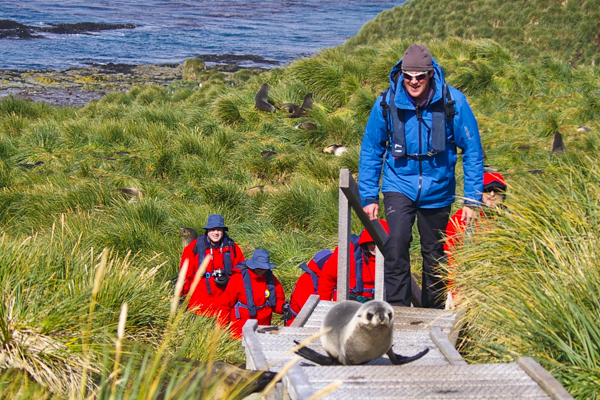 The boardwalk protects the environment, but we weren't the only ones that found it a useful thoroughfare.

Ken Wright (in blue) was one of the expedition staff. He is a naturalist from Lillooet, Canada. 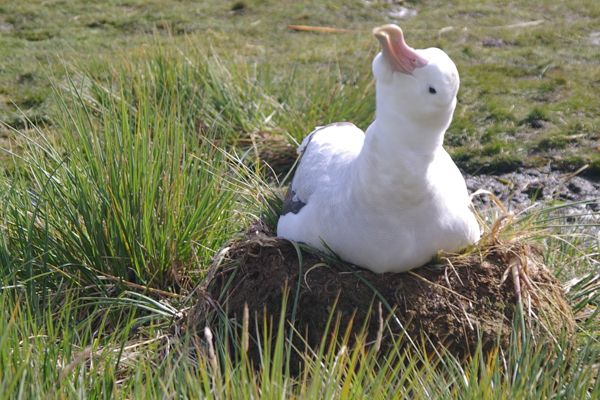 The Wandering Albatross breeds on Prion Island. We saw several birds on their mud nests. To get a sense of the size of these magnificent creatures compare the size of the tussock clumps in the above picture and the ones surrounding the nest. 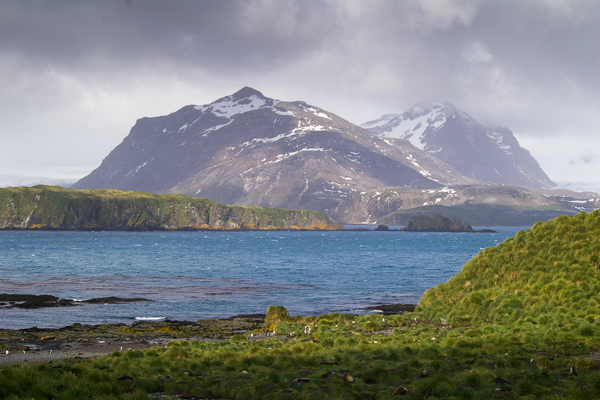 Seals are scattered throughout the tussock clumps. They have recovered well from their dangerously low numbers in the early 20th century. According to the Red List of threatened species they are in the category of "least concern" although their population is decreasing. 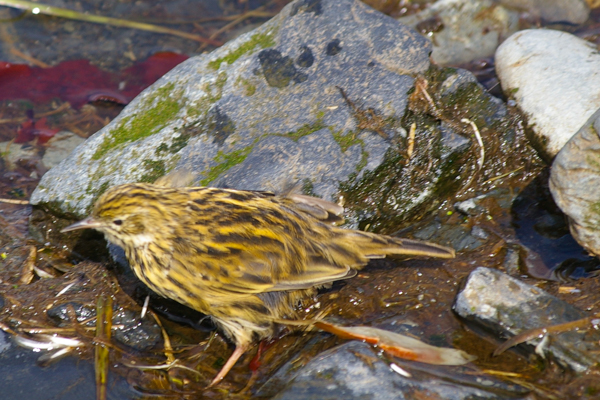 The rare South Georgia Pipit is the most southerly of the songbirds. This bird was found on Prion Island because it is free from rats. Since the time of our visit, conservationists have eradicated rats from all of the islands – a rare success story. 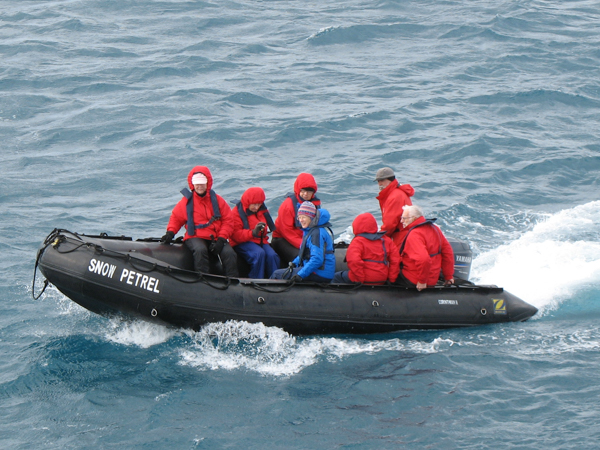 Jim elected not to go to Prion Island, so he caught this picture of me returning on the Zodiac. We were issued coats suitable for the sub-Antarctic climate. Almost everyone had red coats, but I and one other woman had specified a small size and our coats were blue. Oddly, they weren't just small, they were "youth" coats -- a bit snug across the chest!

Our next stop is Salisbury Plain, the more-or-less flat spot between the peaks – one of the few flat areas on South Georgia. It was considered for an airstrip following the Falklands War, but that idea died an unlamented death. We will visit a King Penguin colony there.

King Penguins in the water look somewhat like large ducks with most of their bodies under water. Their "flight" is completely under water where their flippers function as wings.

Some other penguin species porpoise when they are swimming near the surface. Makes it difficult to get a picture of them, but they are fun to watch.

I was glad to see that the staff of the ship got to make shore visits. Most of them were from the Philippines and were saving money for their families back home, but they told us that they relished the opportunity to see the world. They had a rotating schedule of when they could come ashore. 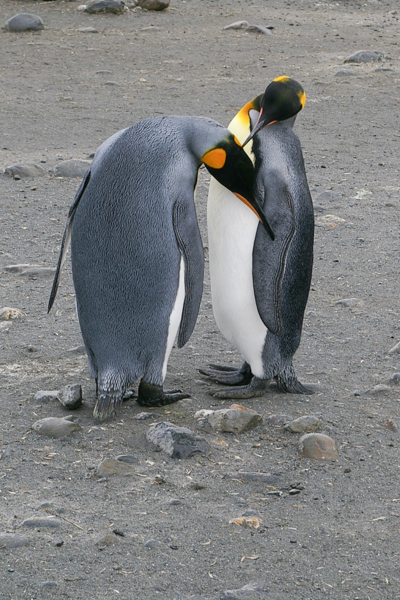 The King Penguin breeding cycle, which is longer than a year, is unique. A colony has birds in all stages of courtship and development. The irregularity of the cycle means that Kings do not form long-term bonds. They mate only for one breeding cycle.

These two birds are courting. They are very graceful and tender together. 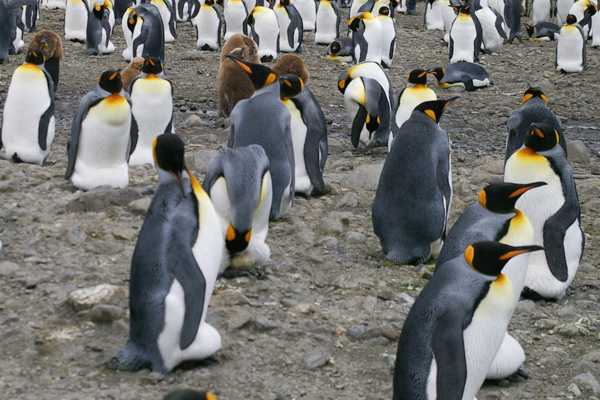 These birds are brooding eggs. Kings, like Emperor Penguins, do not have nests. They keep the eggs on their feet throughout the time of brooding. A special opening in their feathers allows the egg direct skin contact for maximum warmth. One bird can be seen adjusting the position of the egg on his (or her) feet. The parents take turns brooding the single egg. 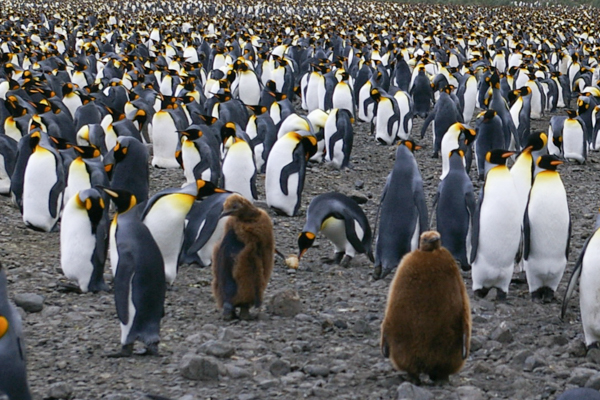 The fat little brown birds, nicknamed "Oakum Boys," are chicks that have not yet fledged. A penguin near the center of the picture is examining an egg that had been damaged and abandoned. 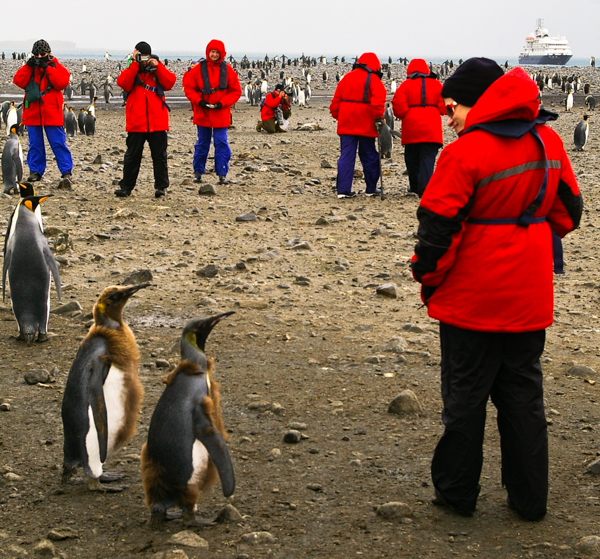 These friendly young penguins are shedding their brown fuzz. It looks like they are waiting for Susan Fienberg to feed them! We were admonished never to walk up to the birds, but it was OK to allow them to approach us. A little guy like one of these came right up to me. Cute, but those beaks were long and wicked looking.

Click your browser's "back" button to return to the index or continue exploring South Georgia.