On our second day we loaded back into our buses for a tour of the Cape of Good Hope Peninsula. Flights out for most of us were not until the evening so there was time to see a good bit of the area. 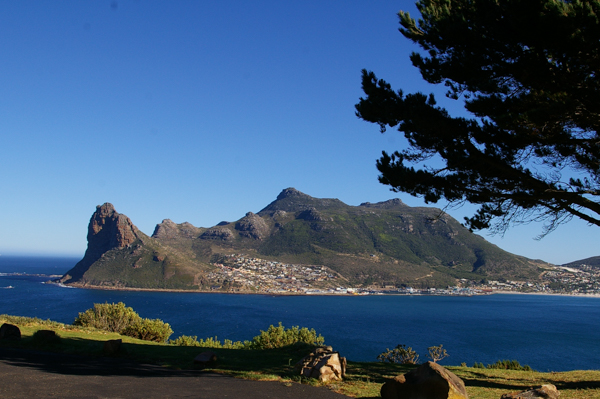 We bade a fond farewell to the Corinthian II and its wonderful staff and loaded into our buses for a trip down the western edge of the Cape Peninsula. We made sure to get on the bus with the same guide as we had the day before!

For those who like maps, seeing the layout of the Cape Peninsula will be a good aid to seeing how everything fits together. I wish I had this map during our excursion because I became quite disoriented in our travels. Plus there are links to descriptions of some of the sights we saw. CTRL-Click will bring up the map in a separate tab so it can be easily referenced.

This is Hout Bay. The houses are suburbs of Cape Town. 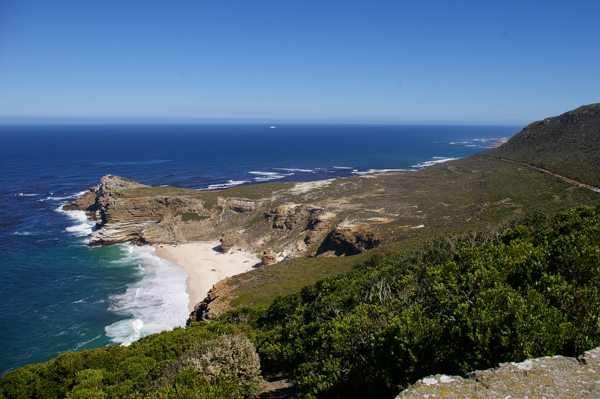 The rocky promontory is the Cape of Good Hope. I am standing on Cape Point, which is where most of the tourist facilities are found. (The white dot on the horizon is Discovery on her way to the Indian Ocean.)

In spite of what you may have learned in school, the Cape of Good Hope is NOT the southern-most point of Africa or the divide between the Atlantic and Indian Oceans. That honor belongs to Cape Agulhas, which we did not visit. It is considerably farther east. 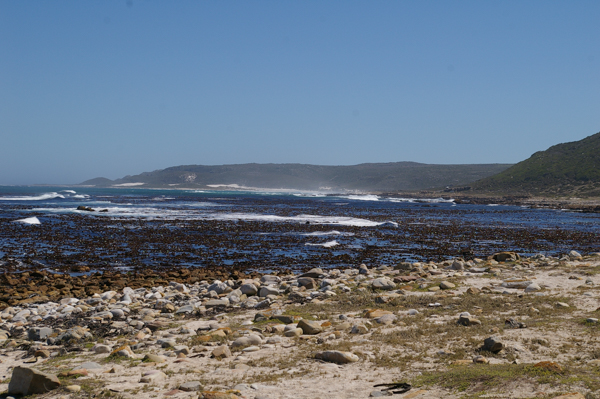 Facing north from the cape. 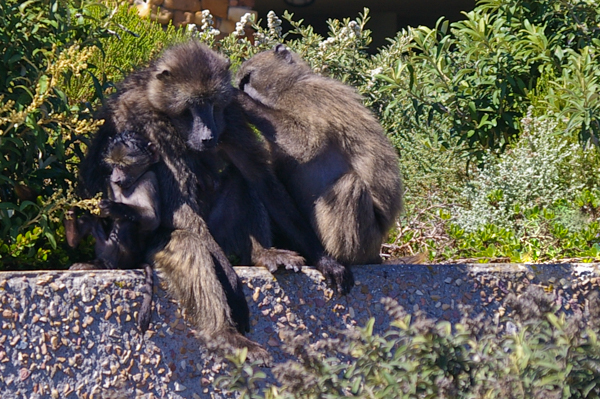 Lots of wildlife live on the cape peninsula, but the only ones we saw were Cape Baboons. One large male prowled the parking lot at Cape Point. This female with her two offspring, one from the current year, the other from the prior year, were much shyer. We had strict instructions to avoid the baboons as they can be aggressive. Nevertheless this family grouping seemed very peaceful – praise be to zoom lenses. 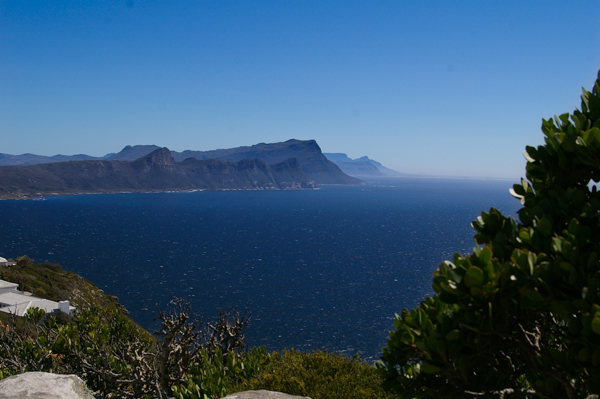 The mountains east of Cape Point are called Hottentots Holland and the bay between is called False Bay. Stellenbosch, which we visited the day before, is just behind these mountains. We will travel along the eastern edge of the peninsula on our way to visit a rookery of ... yes ... penguins. 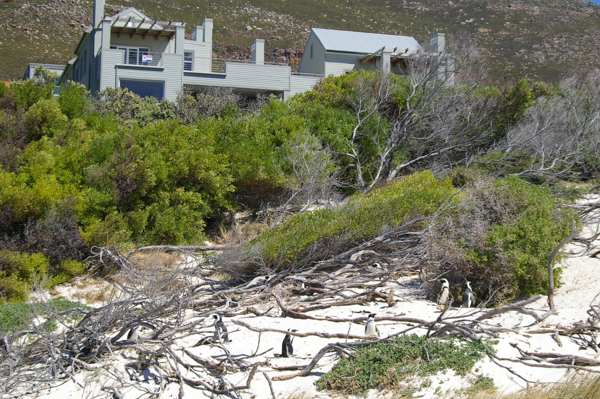 A colony of African penguins has taken up residence on an urban beach on the Cape peninsula. While cruising we had seen a documentary about these penguins called City Slickers. It was a hoot!

Their "song" sounds exactly like a donkey's bray and they were once called "Jackass penguins" before they received a more polite designation.

They are related to the Magellanic penguins that we saw in the Falklands. 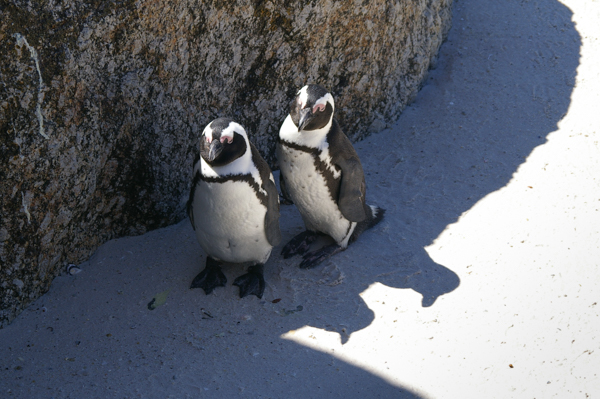 One of the dangers of the penguins' new habitat is the heat. The exposed beach where they have taken up residence doesn't have much protection from the sun. They seek shade where they can find it.

These penguins, like their Magellanic cousins, live in burrows underneath boulders or in the scrub. Local conservationists have also put out plastic nesting boxes, which don't seem to be much favored. 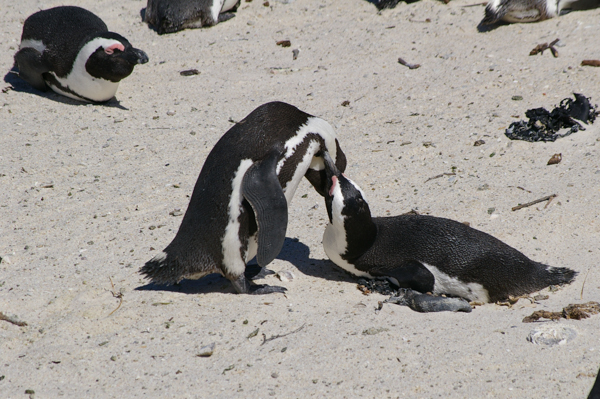 A tender moment as one of a pair returns from fishing. 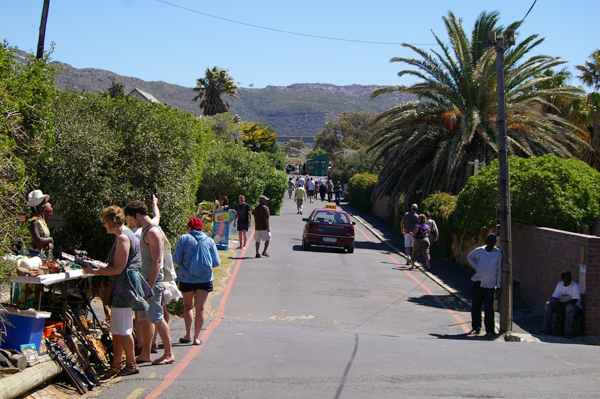 The penguins have become quite the tourist attraction for this formerly quiet seaside suburb.

After visiting our last penguins we drove to Kirstenbosch Botanical Garden on the back side of Table Mountain. It was stunningly beautiful.

There were many lovely vistas and the individual plants were beautiful as well. There were numerous habitats and a vast variety of plantings.

This spiny wonder was part of the extensive collection of endangered cycads at Kirstenbosch. 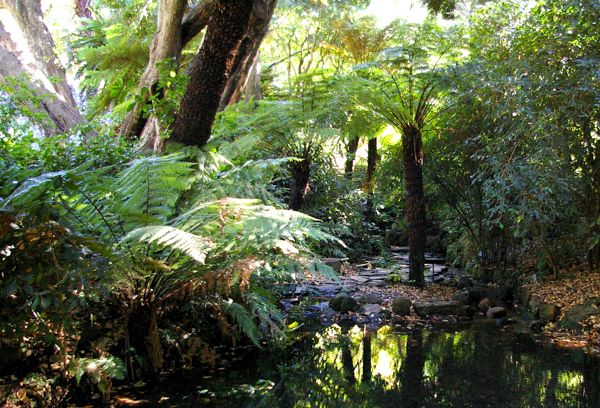 A less threatening area of the garden.

The garden has a variety of habitats including this stream that meanders throughout.

The picture only partially captures the stunning iridescence of this large spider.

I could have spent many more hours here.

But we had a plane to catch and a looonnnng flight home awaiting us.

We may travel the world over, but I don't think there is anyplace prettier than Rockbridge County, Virginia. Especially in the spring.

This is one of the creeks at Windward Farm, where I once boarded my horses.