From the cruise company's perspective, this cruise had one purpose: to get the ship from its "season" for Antarctic expeditions to the Mediterranean for the cruising "season" there. We passengers tagged along to cover part of the fixed costs of this repositioning. The various ports of call were to make it enticing to as many people as possible. Nevertheless we had a LOT of open ocean to cross. It took two days to get from the Falklands to South Georgia, four days from South Georgia to Tristan, and another four days to Cape Town.

Were we bored all those days at sea? Absolutely not! We enjoyed lectures, games, the library, laps around the promenade deck, movies, bird-watching, searching for whales and other marine mammals, and getting to know our fellow passengers. Even though the Corinthian II was much smaller than typical cruise ships, it had a lot to offer. One favorite video offering was the multi-part BBC documentary The Blue Planet, narrated by David Attenborough.

The only disappointment: the weather's lack of cooperation with the "Southern Skies" part of the program. We anticipated several nights of star-gazing far away from light pollution. The captain committed to turn off the ship's lights for brief periods. It was not to be. There was only ONE night that we could see anything. We joined our astronomy expert on deck, but we had to be content with brief glimpses of stars through the cloud cover. 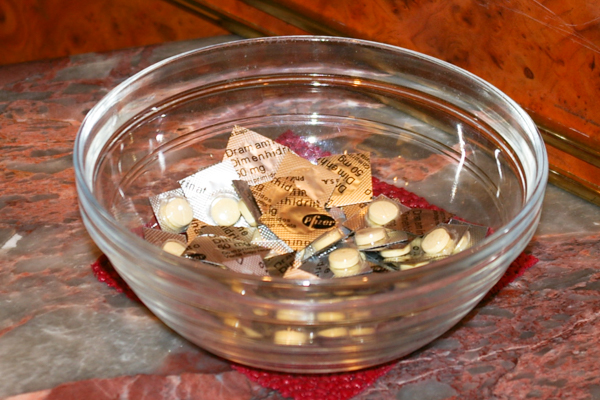 We were not blessed with smooth sailing, although it wasn't as bad as it might have been. We crossed the South Atlantic  in the roaring forties and furious fifties. Instead of the typical bowl of mints at the reception desk, the crew set out this handy supply of Dramamine.

The entire ship was equipped for rough weather. Every horizontal surface had edges to prevent things from sliding off. Doors and drawers had retaining latches. Chairs and tables in the common rooms were chained to the floor. Handrails and barf bags were always within reach. Our cabin's balcony contained a table and chairs tied to the railing. It was too cold and wet, to sit out there anyway.

I have read of a saying: "below 40 degrees latitude, there is no law; below 50, there is no God," but I've not been able to find a source for it. Catchy. (Even though I disagree with the God part). 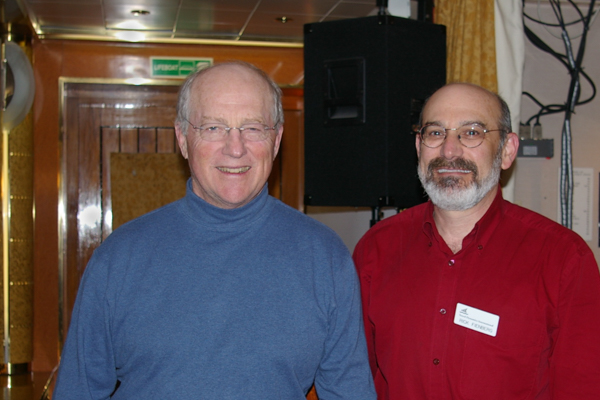 The "Southern Skies" portion of the theme was supported by former astronaut Rick Hauck (L) and Rick Fienberg, editor emeritus of Sky and Telescope magazine.

They presented entertaining and thoughtful lectures about space exploration and cosmology – even though we couldn't see the stars. 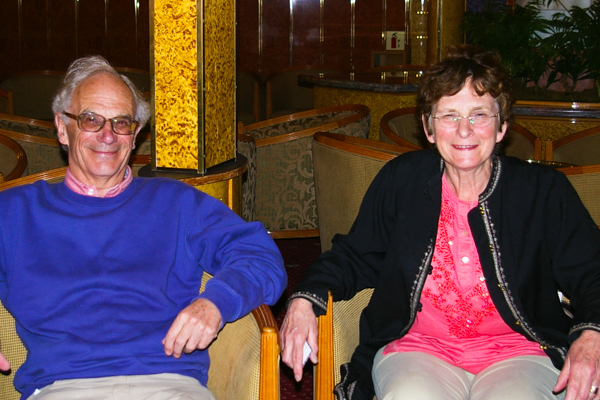 In addition to "Skies," we were privileged to have Piers Brendon and his wife Vyvyen as lecturers on the history of the far-flung British Empire and its people. They are an accomplished couple, besides being delightful companions for a long ocean voyage.

The Falklands, South Georgia, and South Africa have played pivotal roles in empire, and our destination Tristan da Cunha is also a British outpost. 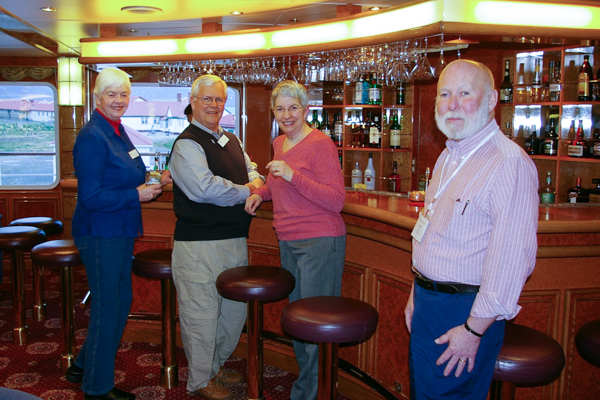 One favorite afternoon activity was gathering in the bar for snacks and cocktails.

Pictured are Mair and Hugh Lewis, Merle Wexler and Jim.

There was also an extensive library on board, a jigsaw puzzle, satellite internet service and other games to amuse us. 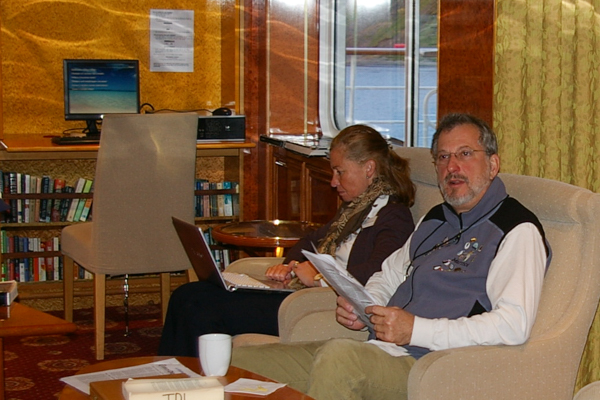 Gary, sitting here with Barbara, one of the expedition staff, was accomplished at processing digital photographs and changed my entire approach to photography. He introduced me to software to adjust the digital images. It is possible to level the horizon (I produce tilted pictures no matter how hard I try) and use cropping, contrast and saturation settings to make the images clearer and more appealing.

Gary had two goals with his photographs: 1) modify the picture as needed to bring it closer to what you actually saw, and 2) let the picture tell the story.

His Mac software isn't available for my PC, but he recommended a similar product, Lightroom, that I have used ever since. He tried to convince me to take photographs with "raw" format, but I'm not yet converted. I do now use the maximum precision my camera can handle resulting in a more flexible images than any I took on this trip (except towards the end after our discussions). 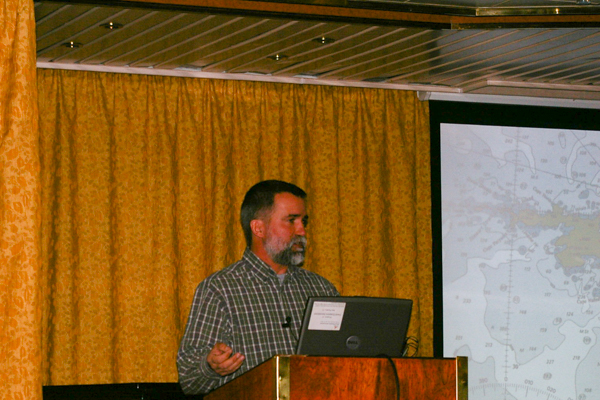 In addition to all of the above, John Frick, our expedition leader, gave several readings – including The Rime of the Ancient Mariner with its warning against harming albatrosses.