Centreville Presbyterian Church sent a mission team to New Orleans, LA, ("NOLA") to help rebuild homes damaged by Hurricane Katrina in 2005. Hard as it is to believe, even now in 2010, there is still so much work to be done.

The group went down in two segments – some flew and a group of "road warriors" drove down in two vans with a trailer full of tools and supplies – also baby shower presents for the CPC mission family of Aaron and Jenny Gordon, who have been serving with Forward Edge International. 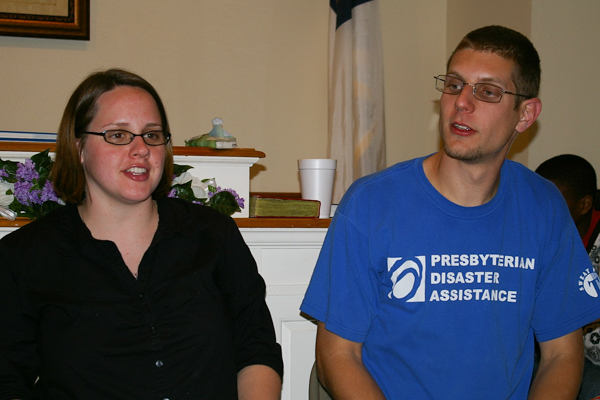 This young couple found a calling in leading mission trips to rebuild homes destroyed by Katrina. 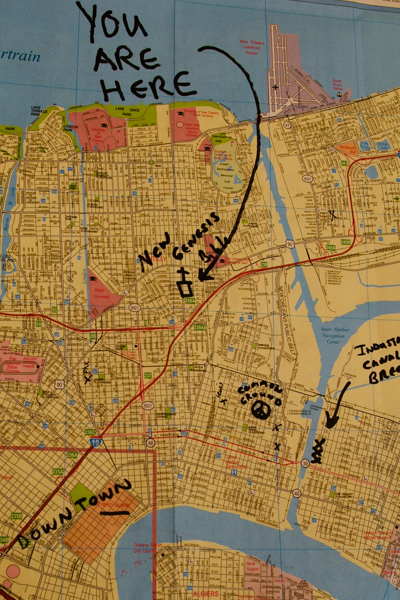 During our time in New Orleans we stayed at New Genesis Bible Church. The church facility had itself been so heavily damaged by flooding that it had to be razed. The former manse was adapted for worship and hosting rebuilding teams.

The house we worked on was not far from the church. The infamous "Lower Ninth Ward" is noted by the Xes to the right of the map. 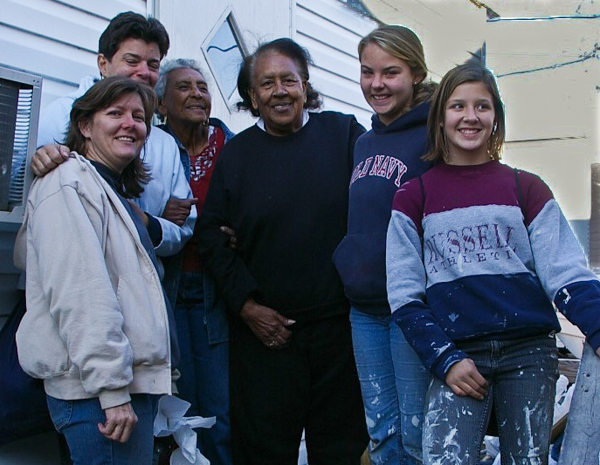 We were privileged to work on a home that belonged to two lovely sisters: Ms Gladys & Ms Josephine, who are in the center of this picture. They had lived in this location for 50 years.

This picture was taken in front of the FEMA trailer where the sisters lived with two other members of their family awaiting repair of their homes. 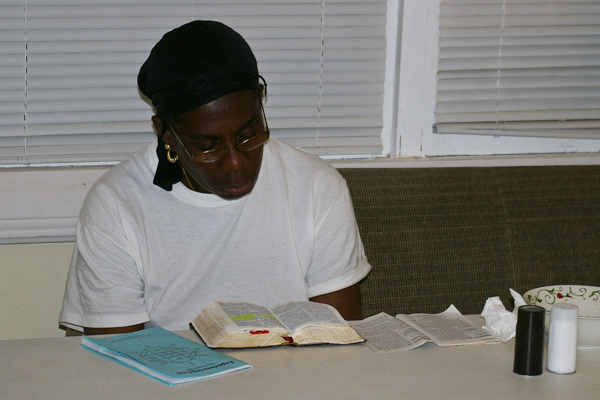 For many of us each day started with some quiet time before breakfast for Bible study. 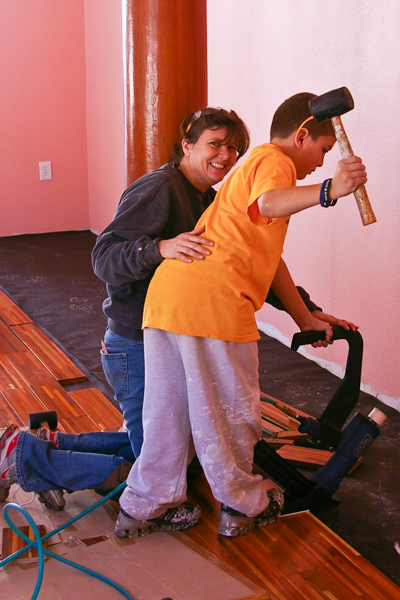 We divided into teams at the job site.

One half of a "double shotgun" house owned by the sisters was nearing completion and would in fact be ready for occupancy by Christmas.

One team worked on flooring.

Another team installed cabinets in the kitchen and bathroom.

Yet another focused on connecting the water heater.

Aaron was a master at keeping all of the teams focused, coordinated, and out of each others' way! 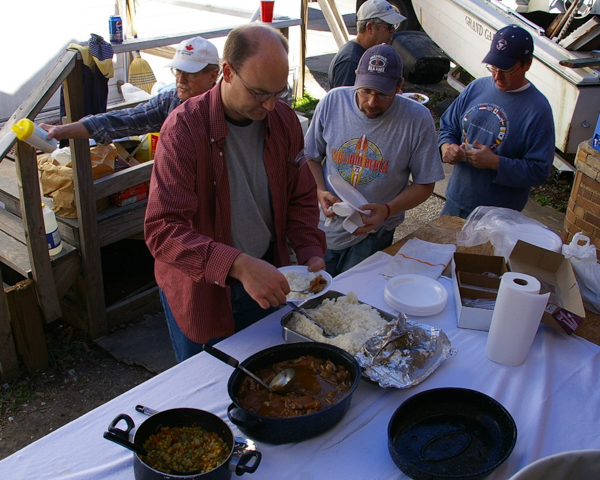 The sisters prepared a lavish lunch spread for us each day. We couldn't imagine how they did it in that tiny trailer, but they did – good New Orleans cooking with all the trimmings. 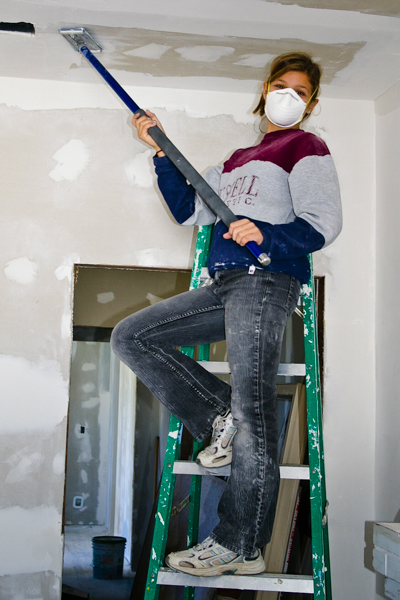 Here's the other half of the house, which was just getting drywall finishing.

So many work projects will not allow young people, but we could not have accomplished nearly as much without our dedicated group of youngsters – even those as young as eleven.

Plus they gave life to us older folks who tended to fade later in the day! 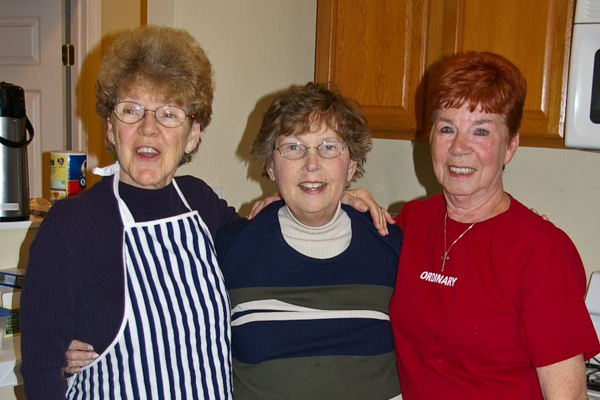 Not everyone in our mission group worked in construction.

We had a wonderful team of cooks who prepared delicious and nutritious dinners for us each day.

We could not have done it without them. 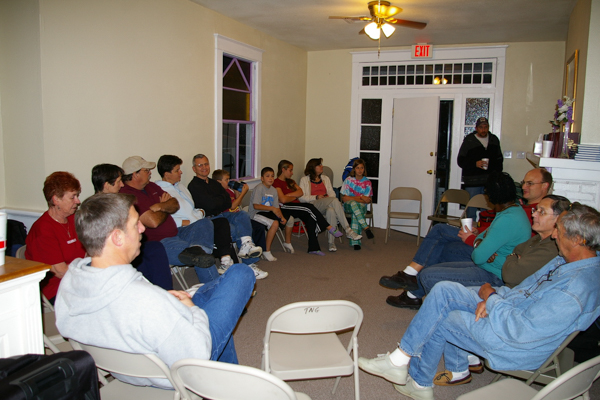 After the day's work was done everyone returned to New Genesis for supper and a meeting to recap the day.

It was a time of reflection and growth as we shared our joys and frustrations.

One of the questions that was consistently asked: where did you see Jesus at work today?

One evening we were privileged to share a prayer service with the New Genesis congregation. On another we had a special celebration and baby shower for Aaron and Jenny! 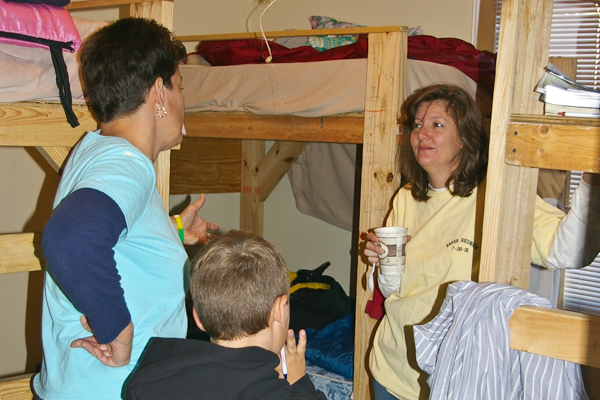 Finally we crawled into bed for a night's rest before starting again the next day.

After several mission trips for Katrina rebuilding, these crowded bunks begin to look like home. New Genesis had the luxury of real mattresses (at least for this room) rather than air mattresses.

The men didn't have such cushy accommodations. They had to drag out air mattresses every night into the meeting room shown above and put them away every morning.

We had the opportunity tour areas that have yet to be repaired. So many places have been left as they were in the immediate aftermath of the cataclysm.

This townhouse shows the extent of the flooding in the stains on the wall and the power of the flood, which moved furniture and appliances around. Remember that this was over three years after the disaster. 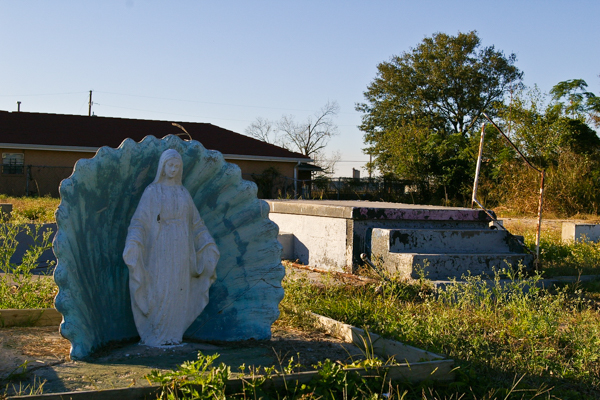 In this area of the lower ninth ward where the destruction was almost complete, a lot where the grass is mowed indicates a family that is determined to return – someday.

The city government has decreed that in order to maintain a claim on property, the property must be maintained – otherwise it will be confiscated. 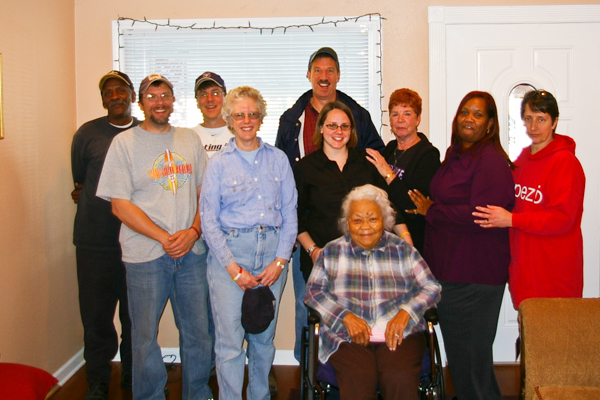 Lest we be too depressed by the destruction, we got to visit a family whose house had been completed by Forward Edge workers.

Each completed house anchors a neighborhood. When one is restored, other neighbors are encouraged to return and rebuild. Slowly New Orleans is recovering from Katrina. 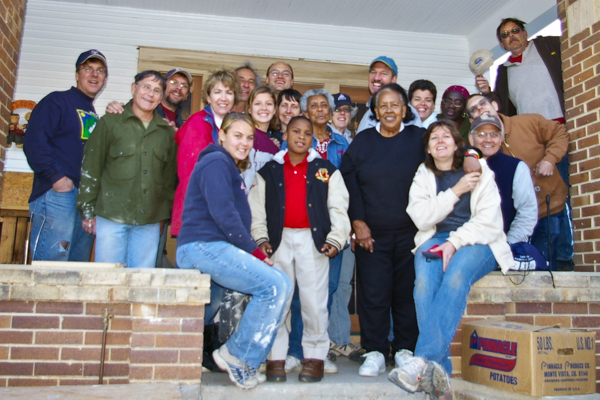 After a long week of construction, we left a house that was much nearer completion than when we came.

Although we didn't get to see the final product we were so happy to hear that the family was able to get an occupancy permit and move into the house by Christmas. What a joyous time that must have been!

The New Orleans that tourists know has been almost completely restored from the hurricane. The residential areas where we worked are still struggling, but the city will survive this hurricane as it has survived others.