The "Deep South" - December 2008
Buenos Aires to the Falkland Islands

Since we had significant frequent flyer miles to use, instead of using the Elderhostel flight arrangements, we took our own routing and met the group in Buenos Aires. Luckily there were no delays for either group, so we converged in good time. We started our trip spending a few days in Buenos Aires and the area before boarding our ship for the trip south. 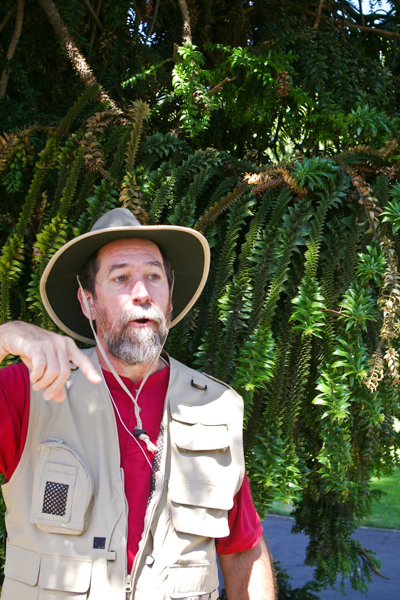 Dr. Michael Doyle, our subject matter expert for the trip, is a botanist and here is waxing eloquent about the araucania tree behind him. It is a survivor from the time of the dinosaurs - well, maybe not this exact tree. It's definitely prehistoric looking. He told us that the tree had very large and heavy cones, which grow at its very top. If a cone falls on your car, it means a trip to the body shop. If it falls on your head....

In all we spent four days in Buenos Aires and environs.

I took more pictures in Buenos Aires and elsewhere than are sensible to put online so I'll try to limit myself to those that are unique to our trip. If you want to see the pink house or Evita's mausoleum, check the WWW.

One evening our program included tango lessons followed by a pleasant touristy tango show with dinner. 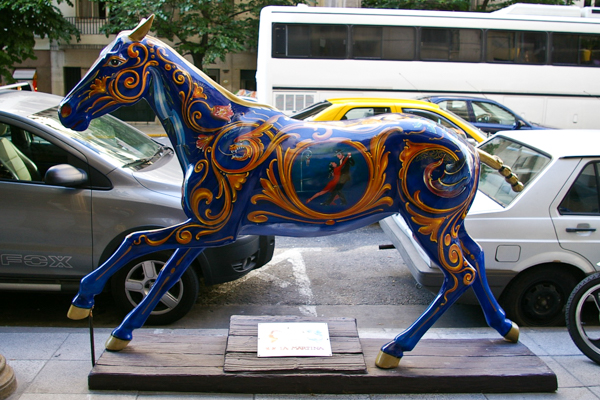 There was a championship polo tournament being hosted by Buenos Aires while we were there. It wasn't possible to get tickets (drat!), but there were a number of decorated fiberglass ponies around town in celebration of the events. 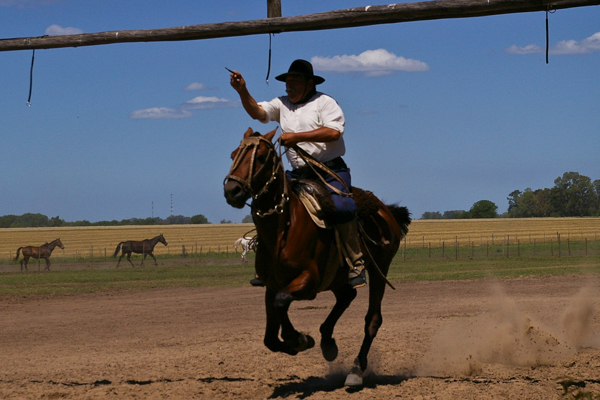 One day we made an excursion into the countryside to visit a working ranch, or estancia.

Part of the "work" that's done there is putting on a show and bar-b-q for us touristas.

In the riding demonstration the gauchos galloped past tiny rings hung from this pole and speared them with small needles. It was somewhat like the Maryland jousting tournaments. 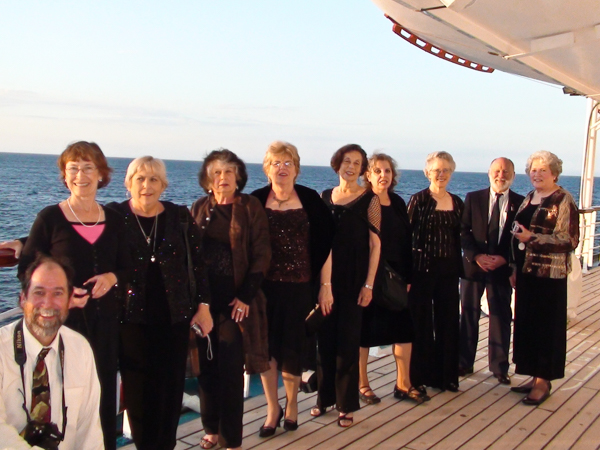 Here's our band of Elderhostel adventurers, minus Tom Dawson, who took this picture and shared it with me. 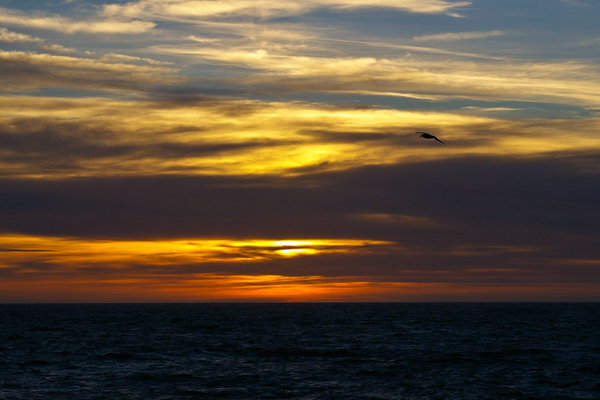 We were three days cruising to our first stop - the Falkland Islands.

There was plenty to do on board with food, a great library, food, music and lectures, food, crafts. Did I mention food?

Lectures gave us much information about the geography, history, flora and fauna of the Falklands and their relationship with Argentina.

Plus there was bird watching - and sunset watching as well. 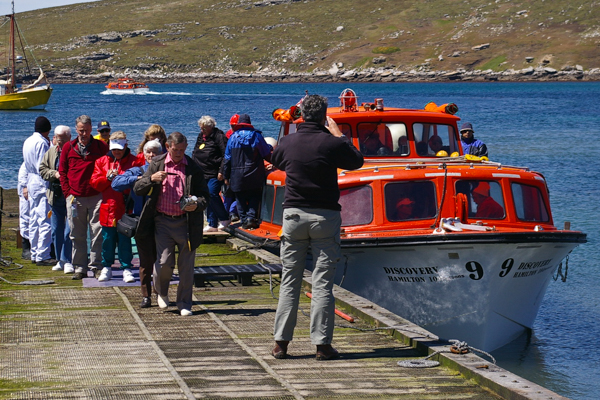 One of the many nice features of Discovery is that we used our lifeboats as tenders to land at many locations, including here at West Point Island. We were glad to know that the lifeboats were all kept in excellent working order with the crew well-practiced in launching them! No. 9 was our assigned lifeboat, so we felt a special attachment to it.

Passengers were divided into color-coded groups for shore excursions. It enabled the crew to manage the number of people ashore so that we didn't overwhelm the creatures we had come to see. 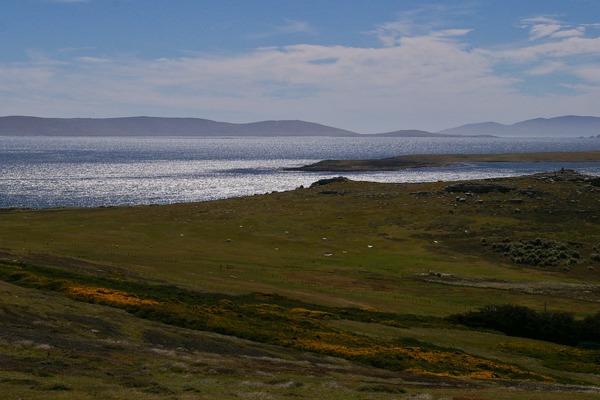 I had not expected the Falklands to be quite beautiful in an austere way, but they are. I've been told that they are much like the Scottish Hebrides. I'd like to visit Scotland someday to compare.

We were very lucky with the weather - sunny and warm. But quite windy, as is common. 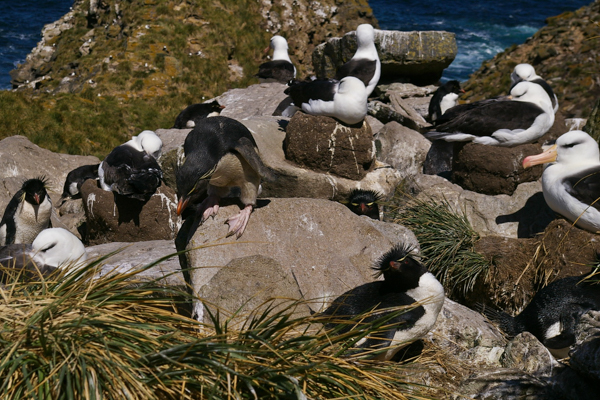 We hiked across West Point Island to visit a huge rookery shared by Black-browed Albatross and Rockhopper Penguins.

The Albatross are quite large and the penguins are quite small. It made for an interesting combination.

At this time in early December the Rockhoppers have already hatched some chicks while the Albatross are still brooding eggs. The parents take turns at the nest and foraging.

This picture does no justice to the size of this collection of birds. Or the noise. Or the pungent odor! 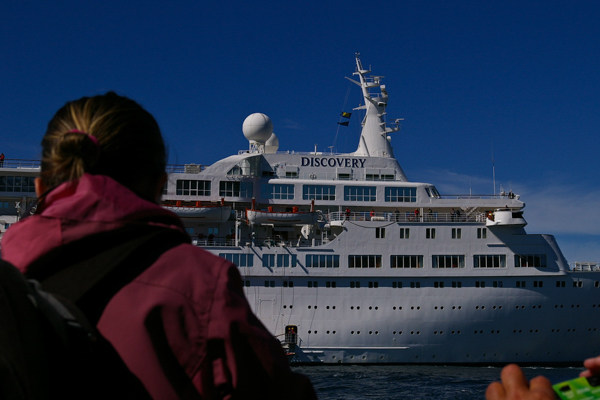 After our visit, which included tea at the homestead on West Point Island, our tender took us back to the ship for our overnight voyage to Stanley, the Falklands capital. 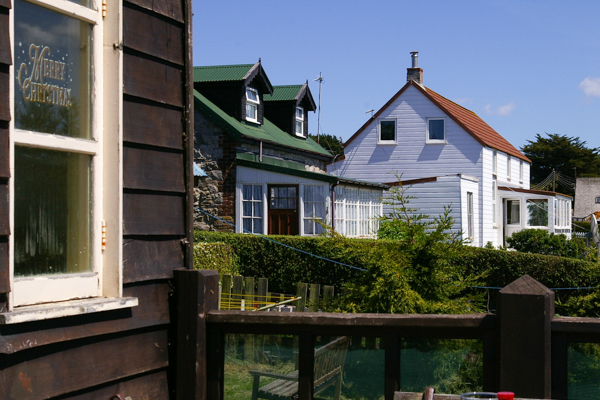 Stanley is the population center of the Falklands. We had a choice of excursions during our day there, but we also found time to have a quiet pub lunch downtown.

It seemed strange to be broiling in the summer sun with a Merry Christmas sign in the window.

We shared the sundeck with a British chap from our ship who had seen service during the Falklands war. He had fascinating stories to tell.

The Discovery's captain had also seen service in that war. While we were in port the local Air Force base sent jets flying by the ship as a salute. 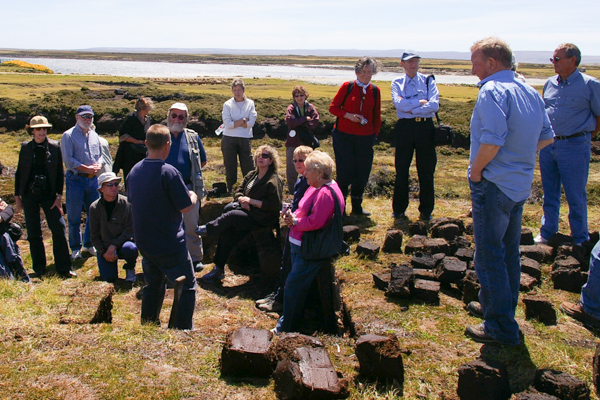 Our chosen afternoon excursion was to Long Island Farm where we learned about peat production, among other things.

Peat, not to be confused with peat moss, is essentially an organic mud that is cut out of the ground. It is then cured in the sun for a period of time. It can then be stored and burned as fuel. Dirt cheap energy!

Except that it is also a fossil fuel of limited supply. 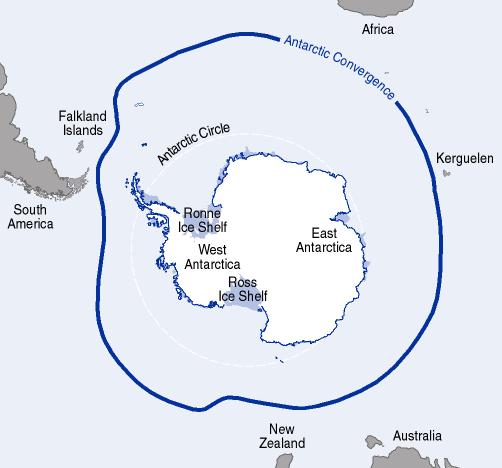 We left the Falklands and traveled toward Antarctica. On the way we crossed the Antarctic convergence or Polar Front.

This demarcation, which can actually be seen in satellite images, marks the boundary of the Southern Ocean. The water and air temperature drop dramatically as you cross it.

I hope you will continue on to look at our Antarctica pictures.