After our last lake crossing, our star-crossed band encountered another problem. One of the members, it turned out, had experienced an attack of sciatica just prior to leaving for the trip. Even though she was in significant pain, she decided to go on the trip anyway. This had not been a problem for the rest of the group on the ship, except her roommate who should have been a candidate for sainthood by the end, but starting with the Ushuaia and continuing, her debility became a factor. She had to have a special seat on the bus, she wanted to cut all the stops short, she wanted to eliminate stops, etc. I've had sciatic problems since and am more sympathetic now than I was then, but she knew the price she would pay for choosing to travel in her condition. Once we reached Puerto Varas, I believe she stayed in her hotel room at least. 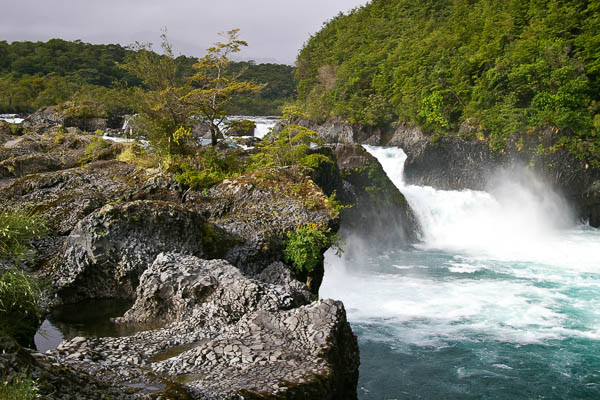 We had one more stop before reaching our destination for the day: Petrohué Falls. The outlet from Lake Todos dos Santos flows over basaltic rocks generated by the nearby Osorno volcano. The water is bright green. 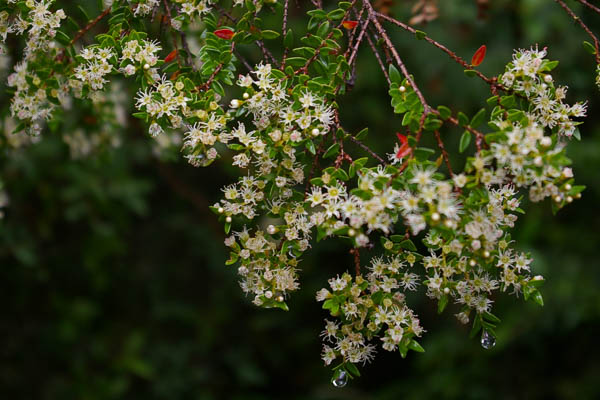 The path leading from the parking lot to the falls had lots of interesting plants. This is possibly Myrceugenia chrysocarpa. 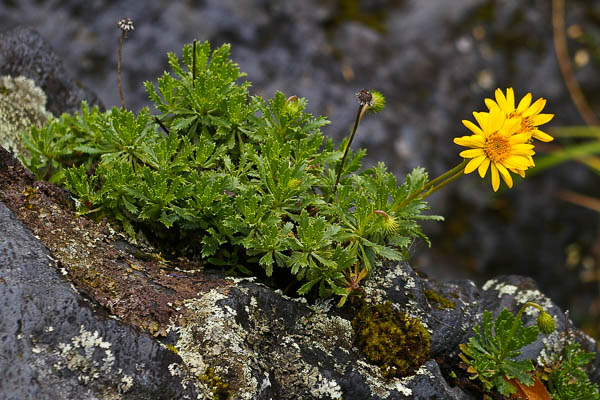 This little beauty may be a haplopappus. 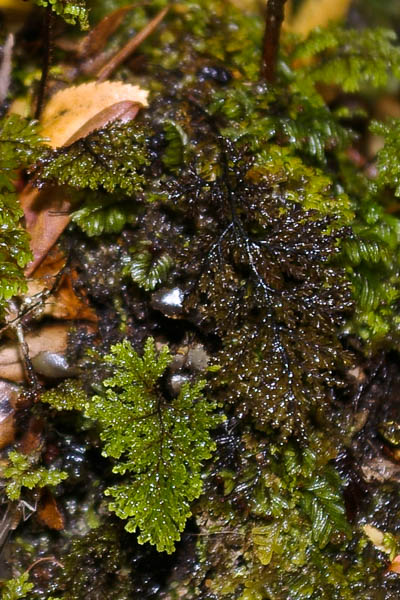 This is the only plant I recall getting information from our leader about. It is a filmy fern. These little marvels are only one cell thick. We also saw them in New Zealand.

I can't say which particular one this is.

Best I can figure, this plant is Ugni molinae, also known as Chilean guava. The berries are supposed to be delicious.

After our time wandering around the natural area, we climbed into the bus for the trip to Puerto Varas where we would spend the next two nights. 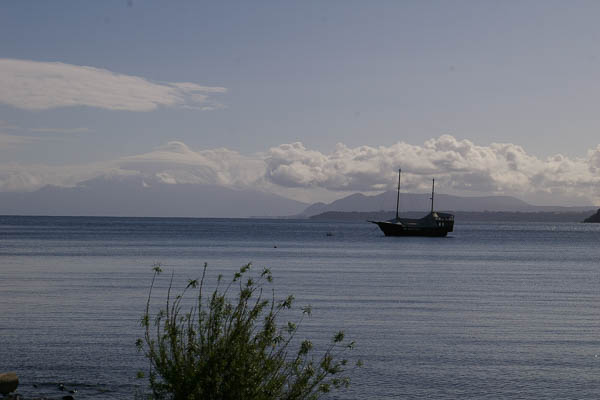 I awoke early to a rare sunny morning. Knowing that sunny mornings often get socked in, I boogied down to the edge of Lake Llanquihue to grab a picture of the Osorno volcano, which was mostly "out" with its snow-covered peak peeking above the cloud layer. The volcano is active, but last erupted in 1869. The region, part of the Ring of Fire, is also affected by earthquakes, including the largest ever recorded at 9.6 magnitude. We've experienced earthquakes on some of our other trips, but not here.

The two-masted ship is the Captain Haase, available for tours of the lake. (In spite of the reference at the link, I've not found any information about a Captain Haase who explored or settled in Chile.)

My instincts were good, later in the day the volcano was socked in again. 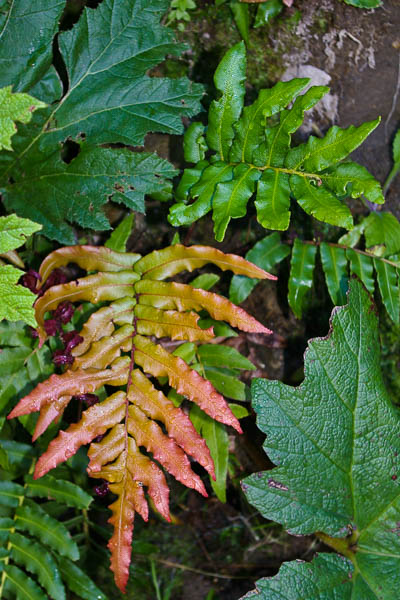 We saw the ferns with red juvenile leaves all over. I've not been able to pin them down, but they may be Blechnum chilense or the related Blechnum megellanicum. 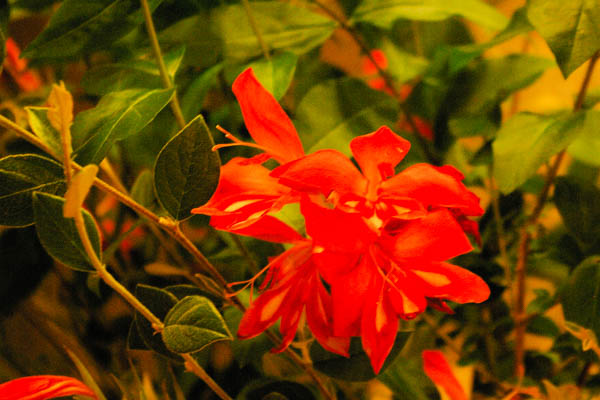 The closest I've been able to come for this beauty is Lapagerias, the national flower of Chile. That said, it isn't all that close. 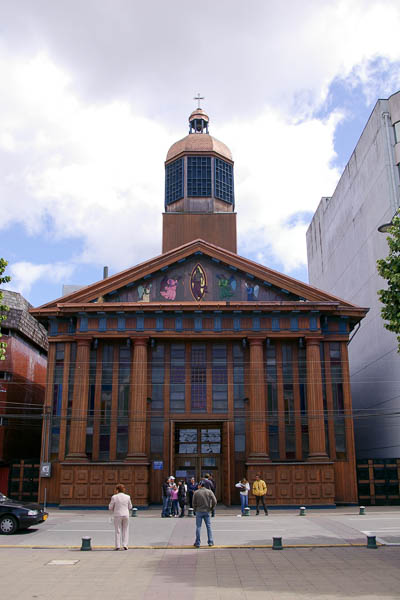 The morning's excursion was to Puerto Montt. We visited the Our Lady of Mount Carmel Cathedral. I don't remember anything about the cathedral itself other than that it was in Puerto Montt that representatives from Chile and Argentina agreed to allow the pope to mediate their dispute over the sovereignty of disputed islands at the tip of the continent.

More about this dispute was in the section on Ushuaia. 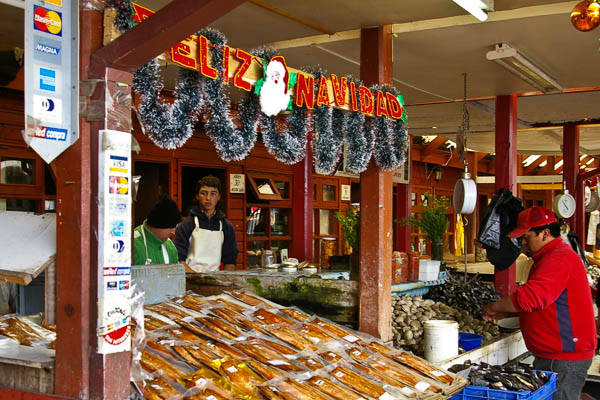 What I really remember about Puerto Montt is the fabulous Angelmo Fish Market. Every kind of seafood (and more) was offered here. Samples were encouraged. Unlike many fish markets, e.g., ALL the ones I've visited in the US, there was no "fishy" smell. Everything was sparkling clean and fresh. 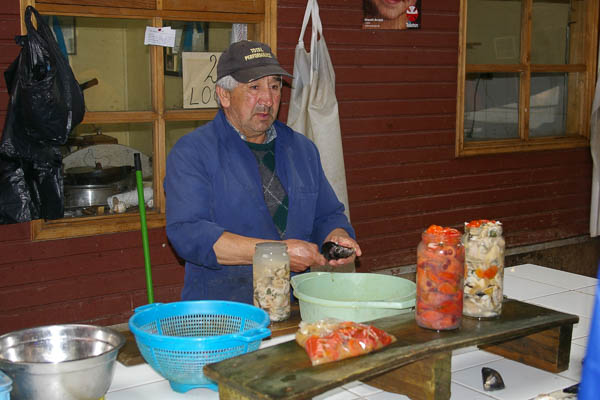 This gentleman was shucking mussels and other shellfish. Some of our group took him up on his offer of samples. We respectfully declined with thanks. 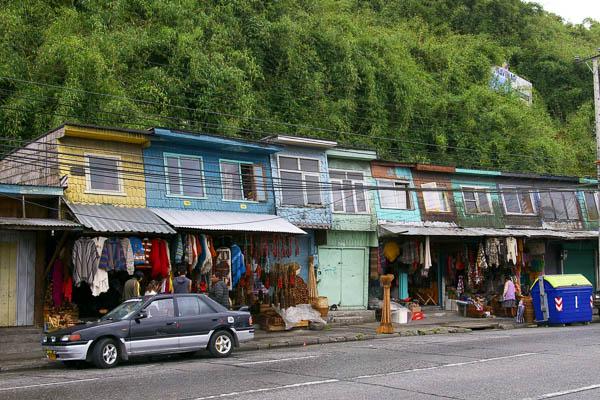 Outside the market was a row of shops in various stages of disrepair, but thriving none-the-less. They offered everything from cheesy souvenirs to lovely hand-made items. I purchased a pair of earrings. I had not known that lapis lazuli was native to Chile. 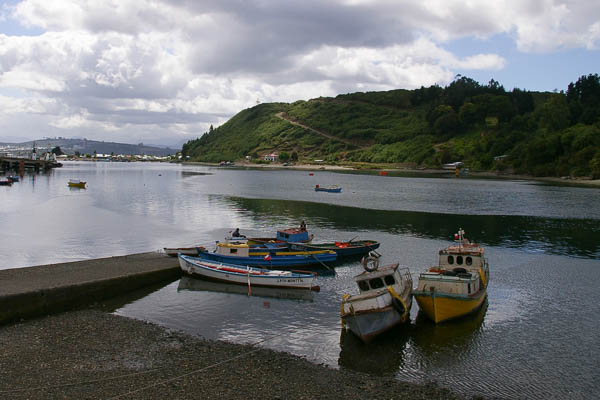 Across from the shops and fish market the direct access to the sea explains the freshness of the offerings. The town of Puerto Montt is in the distance. 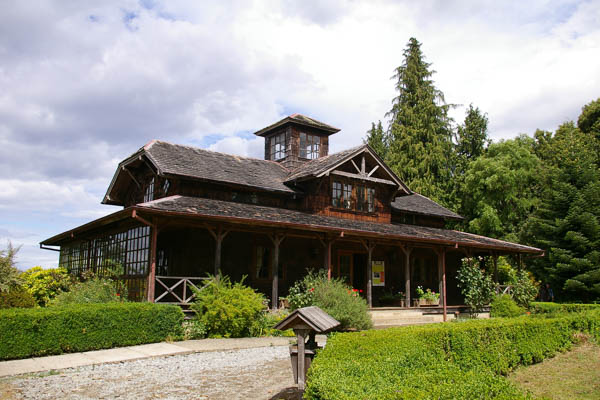 The afternoon stop on a busy day was the town of Frutillar.

My earlier notes say that this is the great house.

I don't recall much detail about this place, but I do remember an overall positive impression. By this time the tension felt throughout the trip was getting to me. 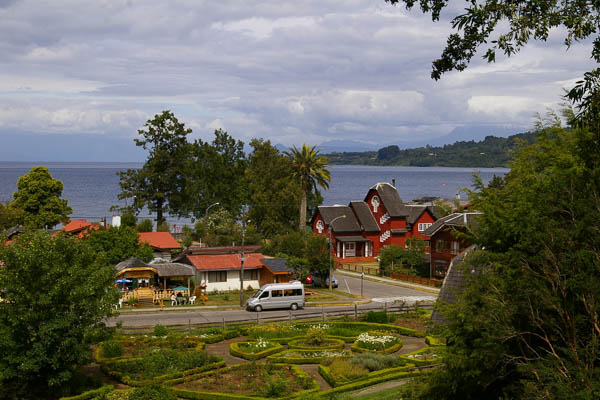 The view over the lake. The base of the volcano can be seen disappearing into the clouds towards the right of the image.

Frutillar was our last stop before the scheduled departure on the following morning, but the trials of our snakebit tour weren't over. That evening when the guide called to confirm our flights, he determined that the airline had cancelled our flight and filed for bankruptcy (you can't make this stuff up!). Our leader and the local guide worked through the night to set up alternate arrangements. We ended up leaving in the wee hours for a multi-stop flight to Santiago.

With the new schedule, our leader put together a half-day tour of Santiago, but pointedly excluded the two participants who had caused so much trouble for us all. Those two ladies quickly arranged their own private tour and also invited us to join them. Jim and I were so tired of the tension and recriminations that we declined all invitations and spent the day exploring the Santiago airport. It was a nice airport. At one point we got off the elevator on the wrong floor and ended up in the restricted area before being politely escorted back to the public spaces. Once the United lounge opened we holed up there until our plane home.

When it came time to review the trip, we gave it a generally positive review because, face it, Antarctica is fabulous and the Andes crossing had fulfilled one of Jim's long-held dreams. Enough of the other participants, however, gave such scathing reviews that Elderhostel sent us each a letter of apology and a substantial refund. In addition they changed their rules to allow trip leaders to send troublesome participants home at any point of the tour. (This has given me visions of helicopters airlifting folks from mid-ocean cruises.) We heard through the grapevine that they had blacklisted the two problem children from all future Elderhostel trips.

The saddest part of this sad story is that we ended up eating most meals with the major problem child while on the ship because no one else wanted to sit with her. She was smart, funny (if somewhat acerbic), and a generally good companion as long as we kept the discussion away from complaint-driven topics. Travel is broadening.