Bariloche and Across the Andes

I wanted to see Tierra del Fuego. Jim wanted to cross the Andes by boat. We had visited Bariloche in 2000 as part of a ski trip. While there, we took an excursion on the lakes leading almost to the Chilean border. Now we would be making the entire trip. 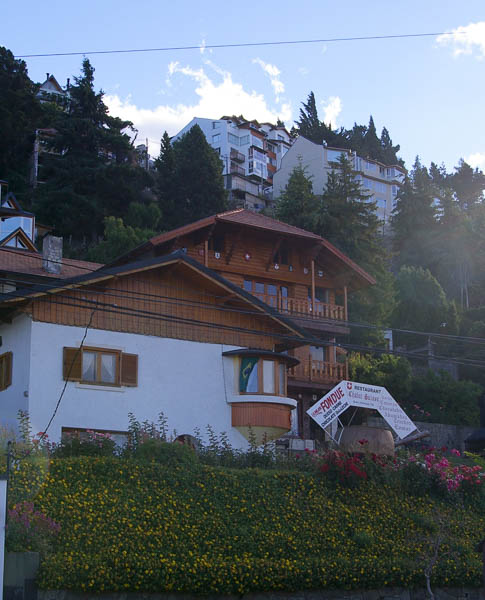 On our earlier visit we had discovered this delightful little fondue restaurant. We had so much fun that we came back later with our fellow skiers and stayed into the wee hours chatting with the proprietor and drinking the schnapps he made from his mother's fruit trees.

Between the world wars, many Swiss immigrated to Argentina. Bariloche was built to resemble a Swiss village and the owner of the restaurant was born in Argentina of Swiss parents. He was keeping up the tradition. According to TripAdvisor, the restaurant is still in business. 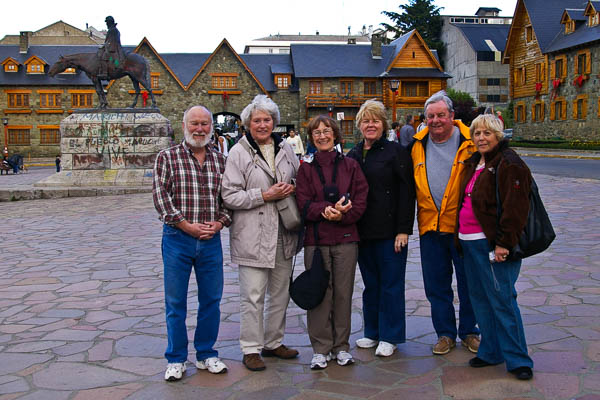 The town square keeps up the Swiss tradition.

L-R: Jim, Nancy, Louise, Anne, Tom, and Charlotte. We spent an afternoon roaming the town, shopping, and visiting a chocolate factory. In keeping with the Swiss-ness of it all, Bariloche is famed for its chocolate (although the Italians get some credit too). 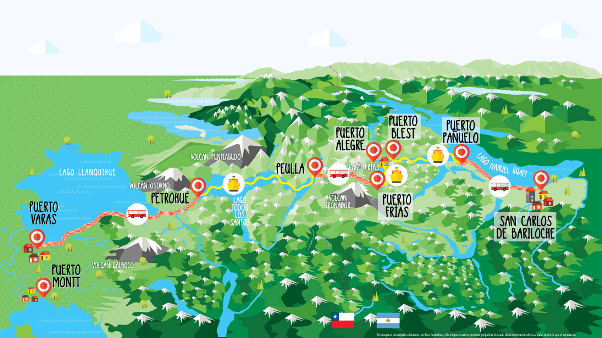 I stole this image from https://www.cruceandino.com/cruce/EN/#.

It gives a good overview of our route from Bariloche to Puerto Varas, where we would be spending the next few days. 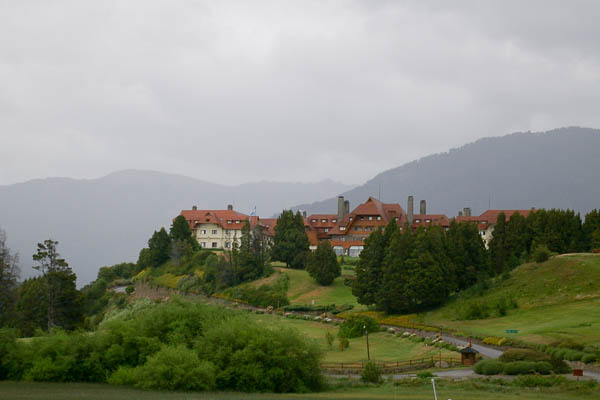 The next morning dawned foggy and rainy for our crossing. That's one of the disadvantages of living in a rain forest.

The Llao Llao hotel, named for the fungus we saw in Tierra del Fuego, is out of our price range. On our prior visit to Bariloche, some of our friends visited the hotel for tea, but it was a good distance from town and required a taxi ride. 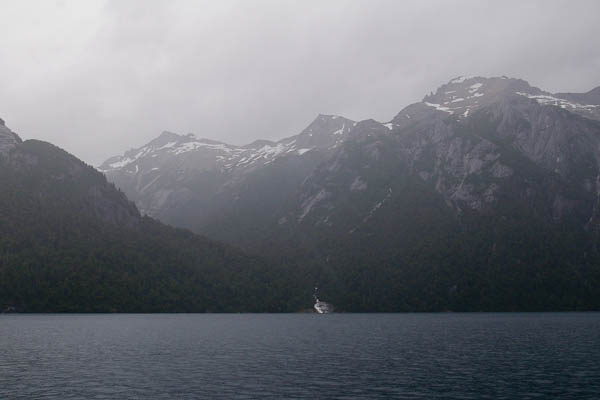 I can vouch from our earlier trip that Lake Nahuel Huapi is scenic, but you couldn't tell from this visit. To see sunnier pictures, visit this travel blog. The route shown there was the reverse of ours.

It cleared briefly so that I could get one shot of the many waterfalls. It's hard to see, but the fall starts from the top of the high peak on the right: another in the perennial question of whether it's a waterfall or a very steep, very fast stream. 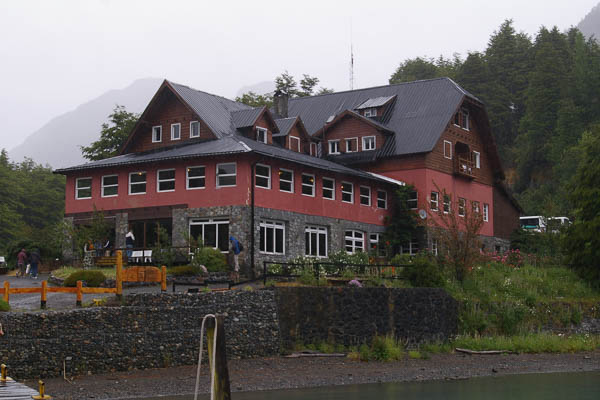 At Puerto Blest at the end of the first lake, we transferred to a bus for the 15 minute hop to our next boat ride. It is worth a visit on its own, but we were people with a mission, so didn't stop here.

Lago Frias was our next place of embarkation. The green water is striking -- there must be copper in them thar hills. 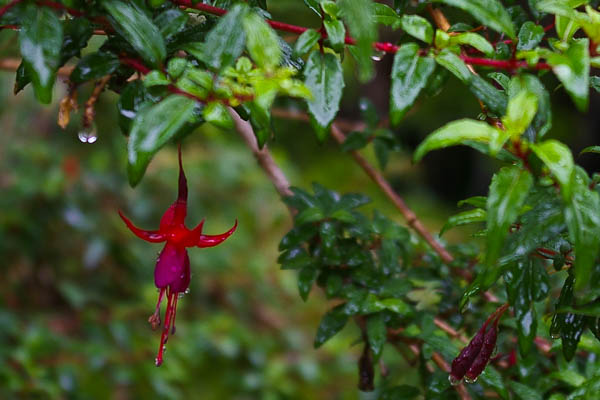 While waiting for our next boat, I took pictures of the local plants. This is fuchsia megellanica, the parent of most garden fuchsias.

This would have been a great place for our leader to have been engaged in describing the native plants to us, but he had been pretty well beaten up by this time and I don't recall that he pointed out much of anything. I found out most of the plant names using the WWW. 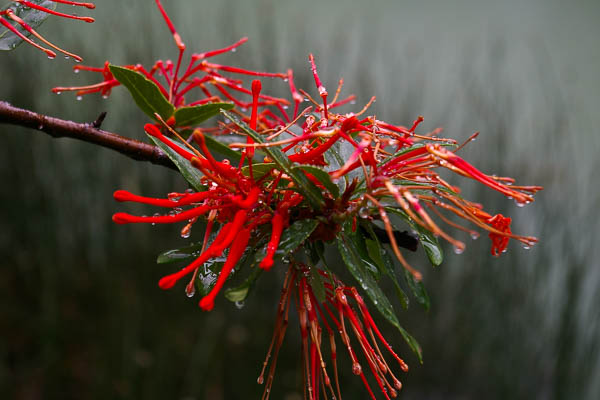 This is Embothrium coccineum or Chilean firebush.

According to the Wikipedia article, it appears to be able to acidify soil in its vicinity, which might make it a valuable addition to my garden plagued with alkaline soil. If it could survive the plague of deer! 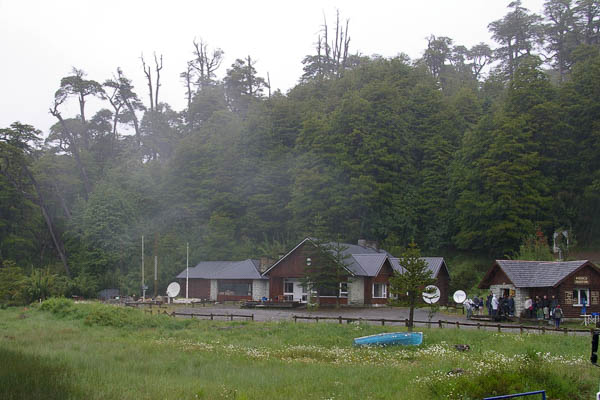 Although we won't actually enter Chile until we cross the spine of the Andes, the border patrol is located on the other end of Lago Frias.

This is where we boarded a bus for the final one-hour leg of our transit to Chile.

The bus stopped at the actual border for the obligatory "Kodak moment." 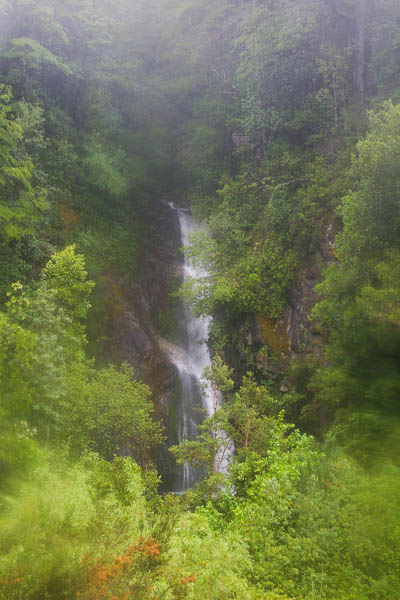 As we descended down the Chilean side of the mountains, I at least captured one of the many waterfalls through the bus window.

Rio Puella feeds Lake Todos los Santos, our next boat leg, but first we had to have lunch. 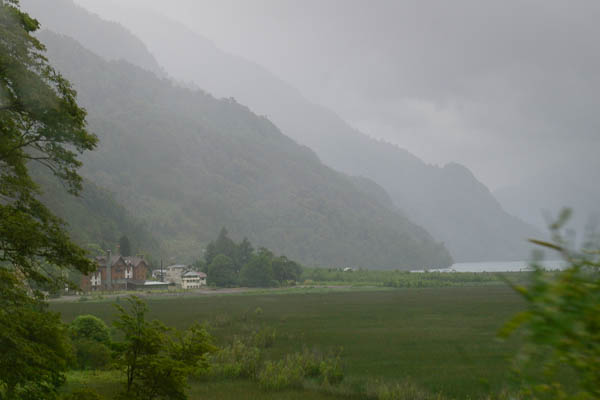 The town of Puella had a lovely restaurant where we had lunch and awaited our next scheduled boat ride. We had an hour or two free time after lunch, and I decided to hike up to a nearby waterfall. Everyone else sensibly chose to stay inside and out of the rain. 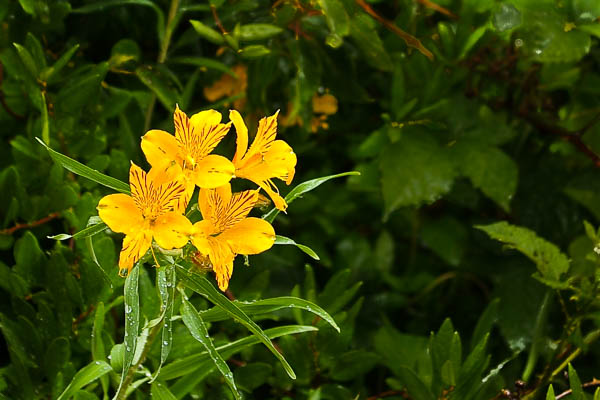 While I was out and about, I took pictures of the flowers.

Alstroemeria is also known as Peruvian lily. Many cultivars derive from this plant native to Chile and Brazil. 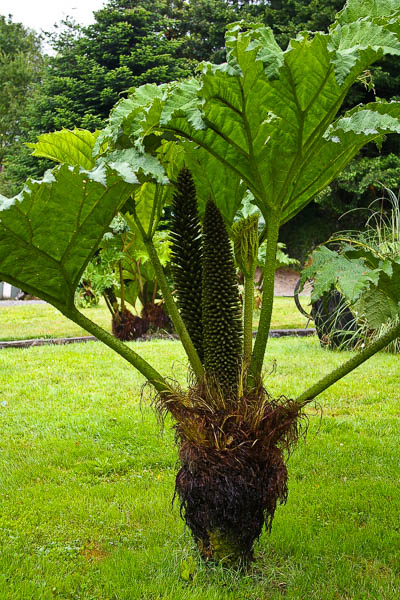 Before our leader gave up introducing us to plants, he allowed that his favorite plant was Gunnera. It comes in a huge variety of shapes and sizes. This monster was next to the restaurant. 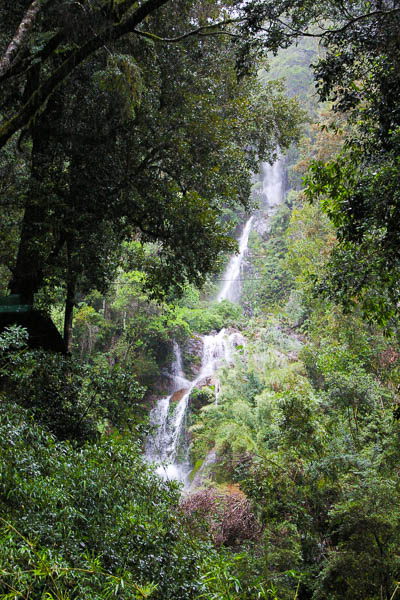 I slithered and slid in the rain to the base of the waterfall, called, naturally, Bridal Veil falls. This was my first encounter with a zip line, which can barely be seen running across the picture. No one was zipping around on this day.

While checking my watch to see if I had enough time to climb to the top of the falls, I heard Jim calling me! The weather was worsening and our boat had decided to leave ahead of schedule. Our leader dispatched Jim to find me.

Thankful that neither of us had gotten on the wrong trail up, we now had to slither and slide with dispatch back down the mountain to meet the boat!

I still don't know if they would have left us or not.

Our group is tucked in for our last watery leg across the mountains.

We were glad to be among them. 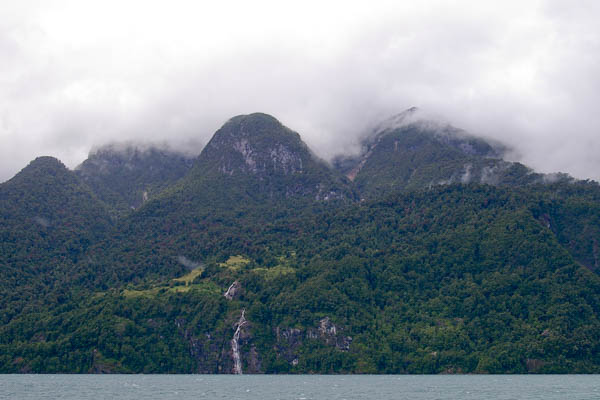 At the beginning of the ride, it was still clear enough to see some of the scenery. 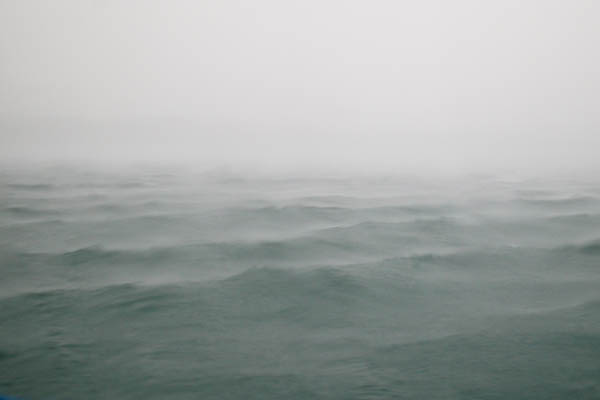 But the weather worsened indeed!

I was amazed at the waves that the wind could kick up on the narrow lake. Our catamaran cut through them without a tremor, but I can't tell you how scenic the end of the ride may have been on a clear day.

At the end of the lake we met the bus that would carry us the rest of the way to Puerto Varas.