The second port of call in the Falklands was Stanley, the capital and only major settlement on the islands with 72% of the total population.

As at Westpoint Island, Discovery anchored outside the harbor and we took the tenders in. There were a number of tour options here. Jim and I elected to explore the town on our own in the morning, catch a bite to eat, and then take a bus tour to a working farm about an hour from Stanley.

The peninsula across the harbor has the names of several ships highlighted in white stone. This is the Royal Navy Vessel Monument and honors ships that served in either the Antarctic Ice Patrol or were assigned to protect the Falkland Islands. There are six ships so honored. 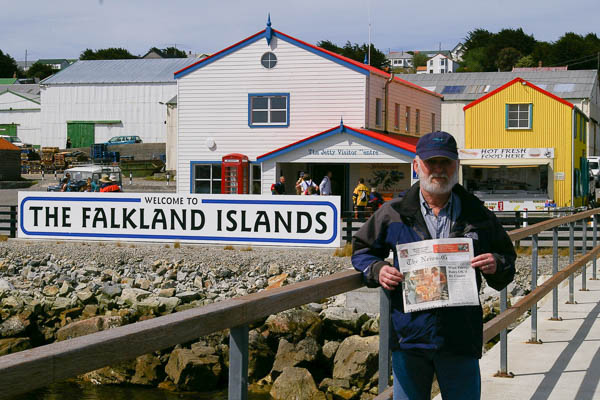 Our local paper, the Lexington News-Gazette, has an annual program wherein people take pictures of their vacations with the paper. We've taken that paper all over the world. 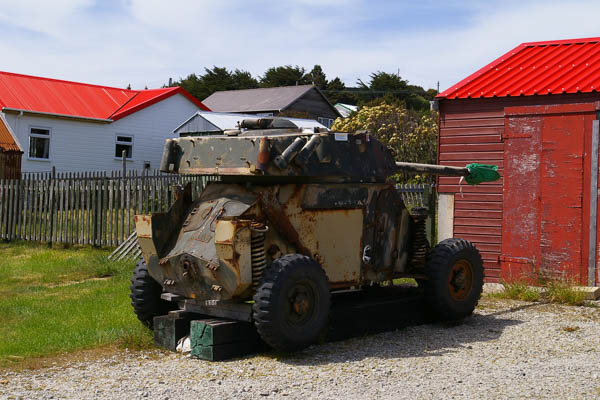 Not everyone has a war souvenir in their driveway. Gleanings from the WWW indicate that it is probably an armored car, Panhard AML-90. These were used by the Argentine forces in the Falklands and abandoned when they withdrew -- along with many thousands of land mines. 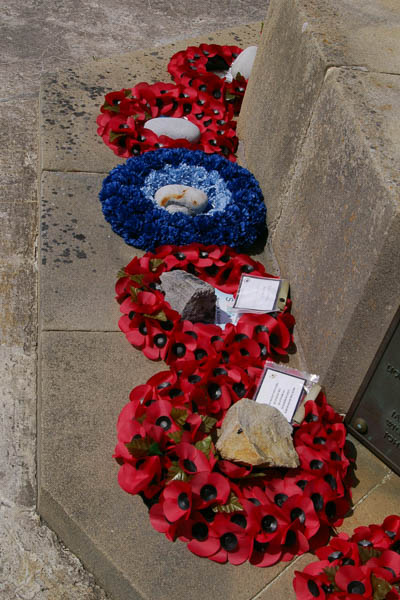 At least one of these wreathes at the local cemetery was placed by SAMA in honor of those who participated in the Falklands war. They are at the base of the Cross of Sacrifice commemorating those who served in the world wars. Other wreathes may have a different provenance.

They were probably placed at the memorial on Remembrance Day, 11 November, shortly before our visit. I was struck by the use of large stones to keep the wreathes from blowing away.

There is a separate memorial specific to those who died in the Falklands war. We didn't get to it. 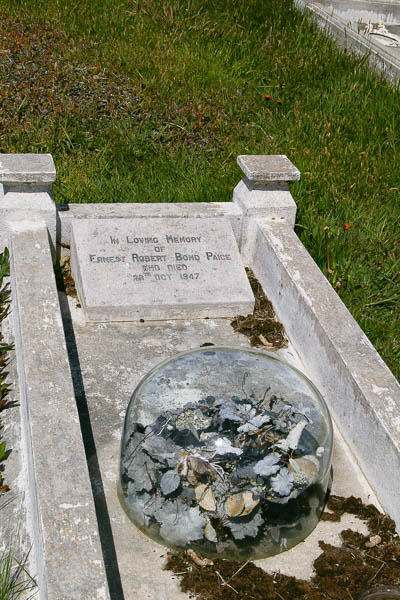 I am a sucker for cemeteries. Something new to me was glass domes or spheres, seen on several graves, protecting flowers or other decorations. A visit to the WWW describes such displays as immortelles.

They first became popular in Victorian times, but according to one reference, most surviving examples date from 1900-1950. Sometimes the glass is enclosed in a wire cage for protection. 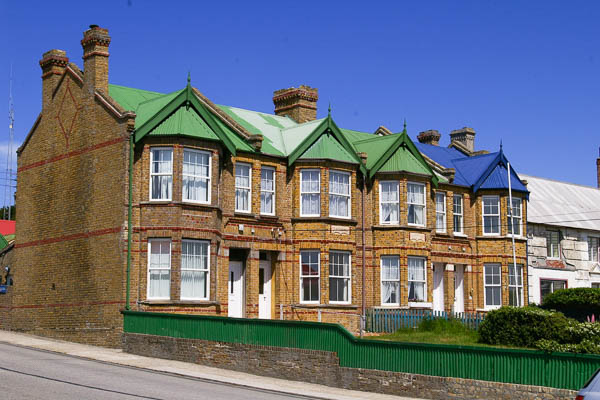 This block of houses with the diamond pattern on the end wall was built in the year of Queen Victoria's Diamond Jubilee to celebrate her 60 years on the throne.

As I'm updating this travelogue, Queen Elizabeth II, is preparing to celebrate her Platinum Jubilee, 70 years on the throne. 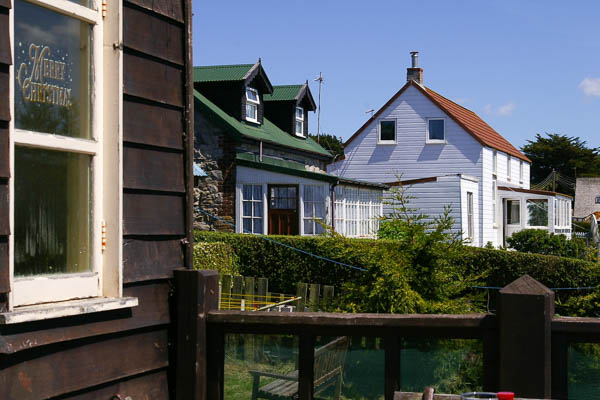 Jim and I had lunch on the back deck of a local pub. (The "Merry Christmas" sign was incongruous as we broiled in the summer sun.)

A visiting Falklands war vet shared the deck with us. When he heard we had come on the Discovery, he told us that the captain had also served in the war. While we were in town, the local air squadron buzzed the ship to salute him.

He had many interesting and poignant stories about his experiences in the war -- not least of which was the memory of the days/weeks of nervous anticipation as the troop ships steamed south. 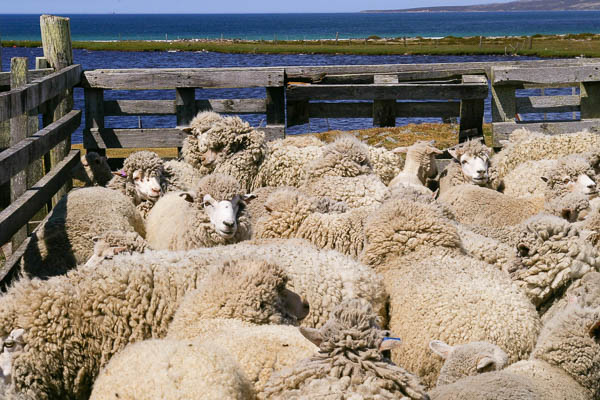 After lunch we met up for an excursion to Long Island Farm where we learned about sheep husbandry, peat production, and other things.

Sheep have long been a staple of the Falklands economy. The breeds commonly used are Corriedale and Polwarth (these appear to be Corriedale).

On a later trip to the Falklands, I purchased a wool scarf that is exceptionally fine wool. I am sensitive to itchiness and I can wear that scarf next to my skin with no ill effects. 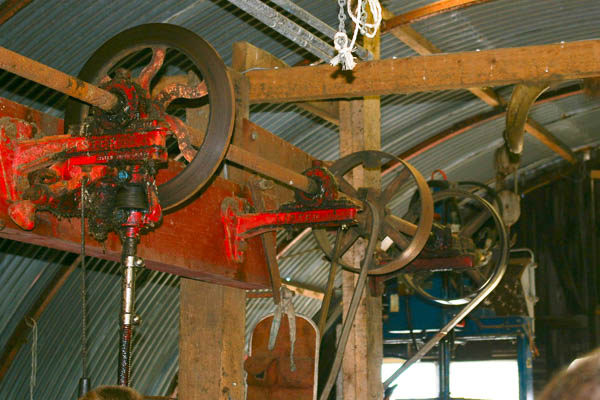 The shearing shed is set up to support multiple stations with a single driver.

The sheep was quite docile during the demonstration. The shearer's goal is to extract the pelt in a single piece. 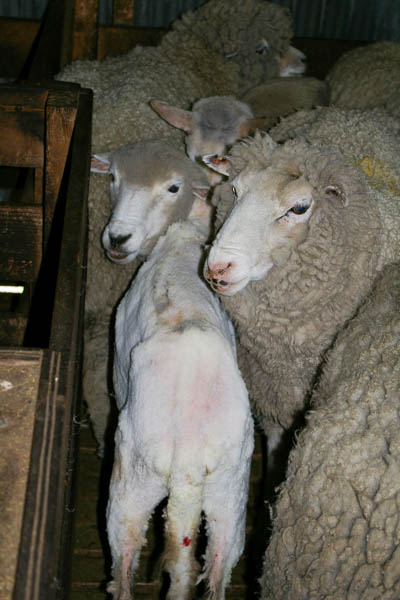 Without all that wool, the sheep is a shadow of her former self. She seeks the comfort of her woolier mates.

Note the long tail, which unfortunately got nicked in shearing. The relative absence of flies in the Falklands means the tails don't have to be docked. 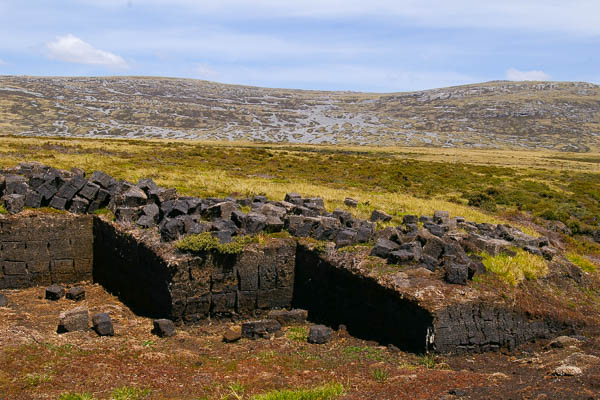 Peat, not to be confused with peat moss, is essentially an organic mud cut out of the ground. After curing in the sun for a period of time, it can be stored and burned as fuel. Dirt cheap energy!

Except that it is still a fossil fuel of limited supply.

The sod on top of the peat bank is preserved and replaced to prevent runoff and erosion after the bank is cut away. 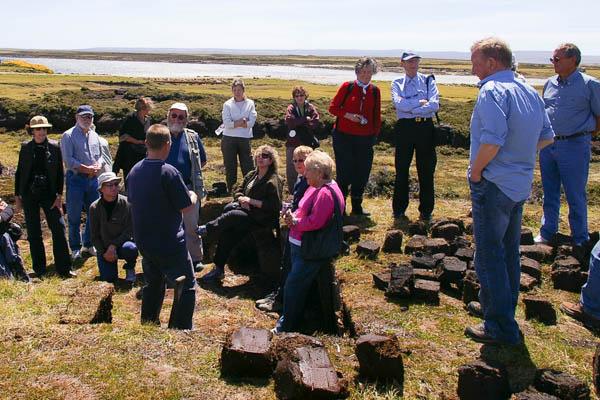 We learned all about peat's origins, harvesting, and use.

A peat fire has a distinctive smell. I expect I would recognize it again today. 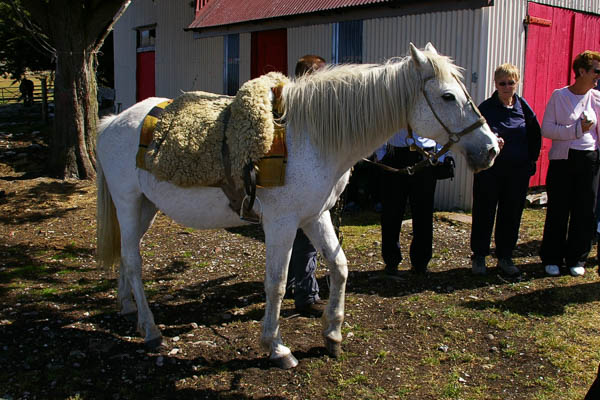 Another demonstration illustrated the local style of horse clothing. It is similar to that used in Argentina. The "saddle" is quite comfortable for the rider.

An annual horse racing and community event occurs each "Boxing Day" (26 December) near Stanley. I doubt this creature would be competitive. Click for a lively YouTube video of the 2019 event.