Argentina claims the Falkland Islands, which it calls the Islas Malvinas. The UK begs to differ. We were told that a diplomatic solution may have been possible prior to the invasion by Argentina in 1982. Since that time, the islanders are adamantly anti-Argentine. We were also told that a primary reason for the invasion was to deflect internal Argentine unrest under the military dictatorship.

Hmmm. Would you prefer to live under a liberal democratic government or one that has a history of torturing and murdering its citizens?

We visited two locations in the Falklands shown by the red stars: Westpoint Island and the capital, Stanley.

The transit between the two was overnight, so I don't know the route the ship took, but I suspect it was to the north of the archipelago. 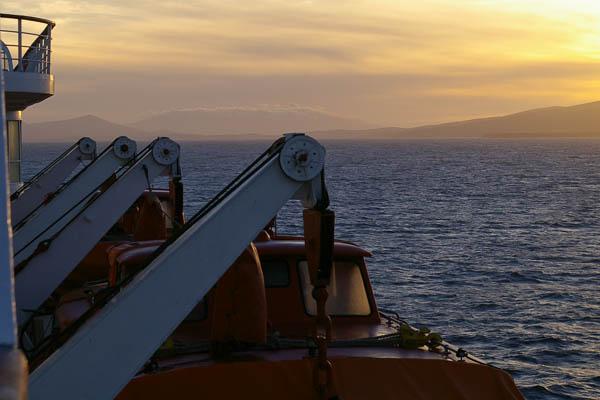 We arrived at the Falklands at dawn on 10 December. The islands resemble the Hebrides and the climates are similar, although the Hebrides are a touch warmer. 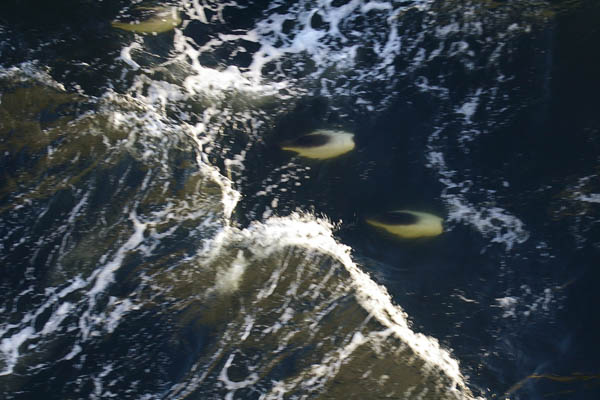 A pod of Commerson's dolphins met the ship, frolicking on the bow wave. 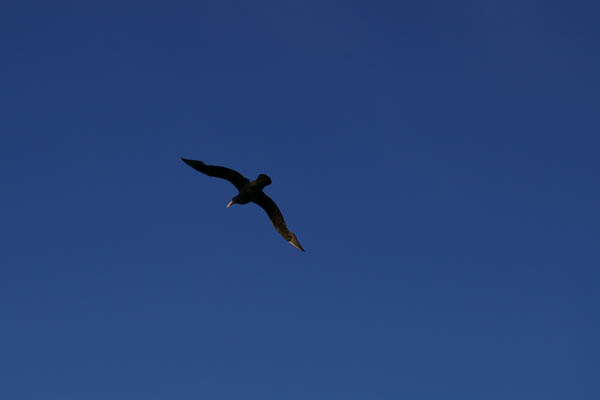 Imperial shags AKA king cormorants. We would see many of these before the trip was over. 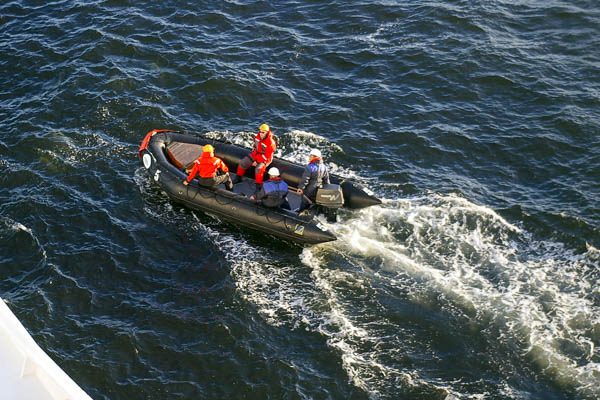 We passengers would not use Zodiacs at West Point Island, but the scout crew did. This was the case at all of our landings. 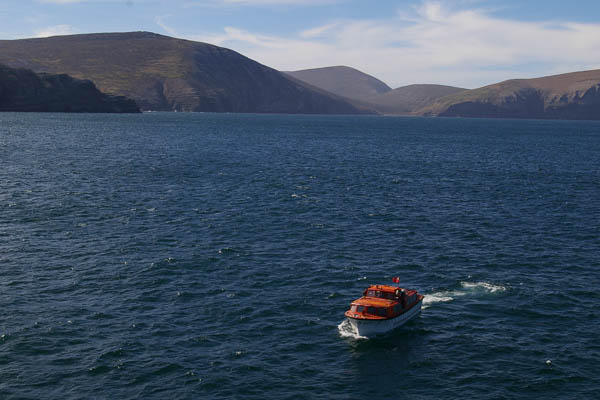 Passengers traveled ashore here on our assigned lifeboats, which served as tenders. The crew had extensive experience launching the lifeboats, and we were assured they were seaworthy. A good feeling to have. 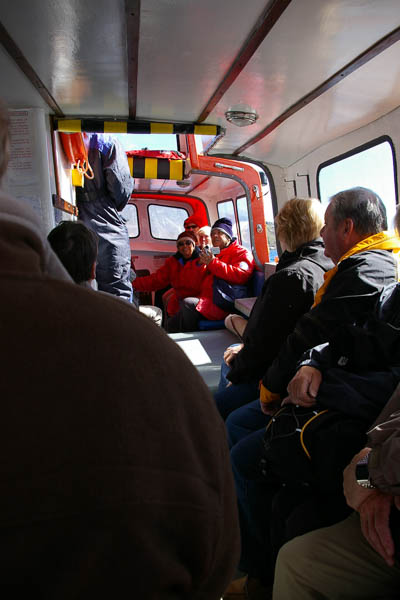 We were cozy inside. I wouldn't want to spend too many hours or days in one of these after a shipwreck ... though it would be far better than swimming with the sharks. 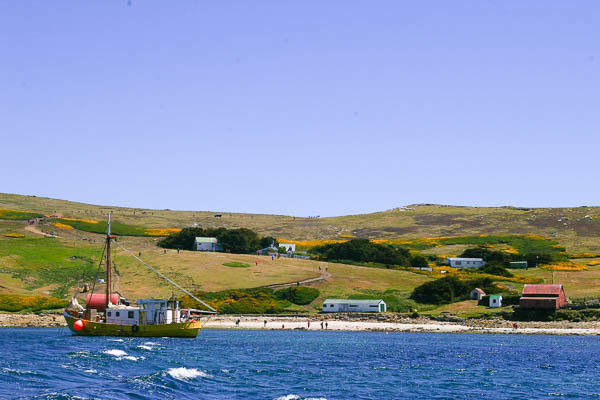 The farmstead on West Point Island has a harbor and beach. The penguin and albatross rookery is on the opposite side of the island. A road with walkers winds over the hill in the distance.

Since the ship carries about 500 people, we divided into five color-coded groups for landing. Too many people descending on the birds at once would be disruptive. 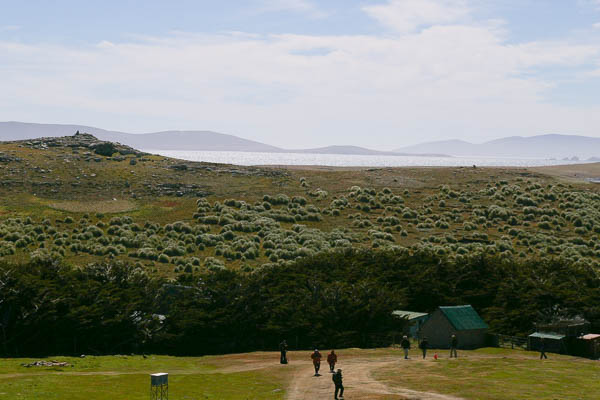 As we climb up and look back, the land behind the belt of trees shows clumps of the native tussock grass. Sheep love it so it only survives where the sheep are fenced out. The grass is necessary for the penguins and albatross.

The tensions within the group had escalated to the point that our leader made no attempt to keep our small band together here or pass on his extensive knowledge of he local flora. We were disappointed, but focused on the birds anyway. 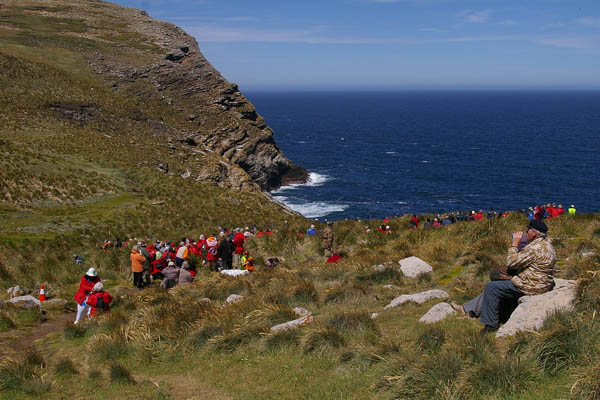 Even though the explorers are metered in groups of 100, we still have a major impact on the area. The oohs and aahs at the rookery caused the inevitable traffic jam as groups collided. 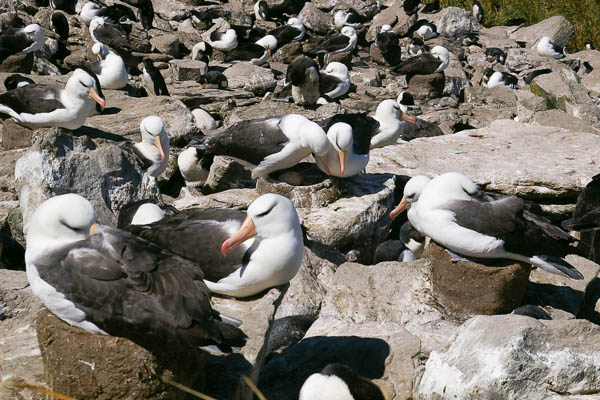 Black-browed albatross are social birds and cram many cylindrical nests into a small area. They coexist peacefully with the much smaller rockhopper penguins scattered here and there.

The Falklands are the primary breeding area for these birds, although they have other breeding sites throughout the southern ocean.

Both parents care for the single egg. One broods while the other eats. The pair in the middle of the picture are "changing the guard." The egg can just be seen in the nest. 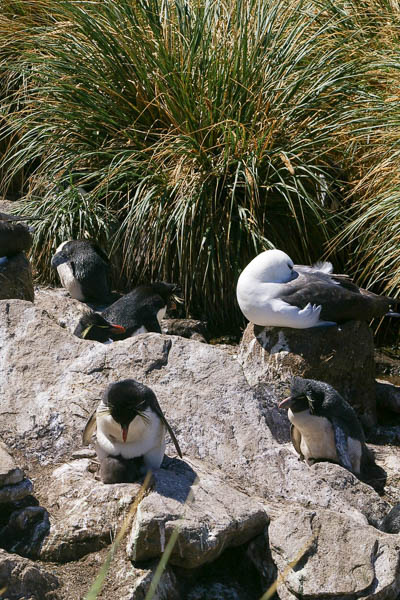 The rockhopper babies, on the other hand, have already hatched, but not yet fledged. A fuzzy baby is barely visible underneath its parent in the lower left.

Like the albatross, parents take turns caring for the chick and foraging. 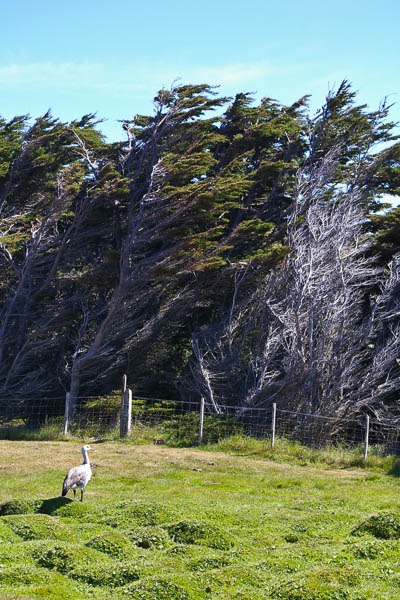 As we return to the farmstead, the trees in the windbreak illustrate the constant and ferocious winds. No trees or shrubs are native to the islands.

There are several species of goose native to the islands. This one may be a male upland goose. 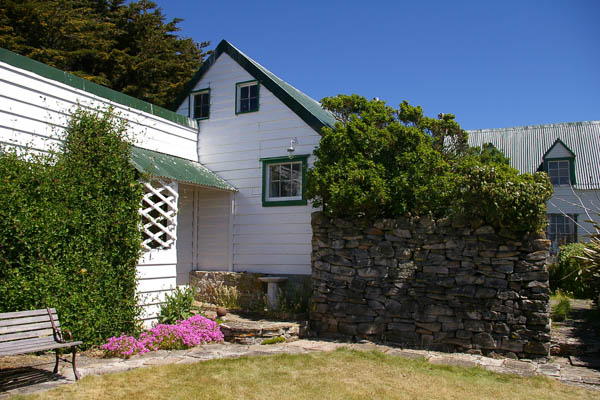 The residents of the farm treated us to tea in the small room reached by the stoop, just in case we hadn't been fed adequately on the ship. 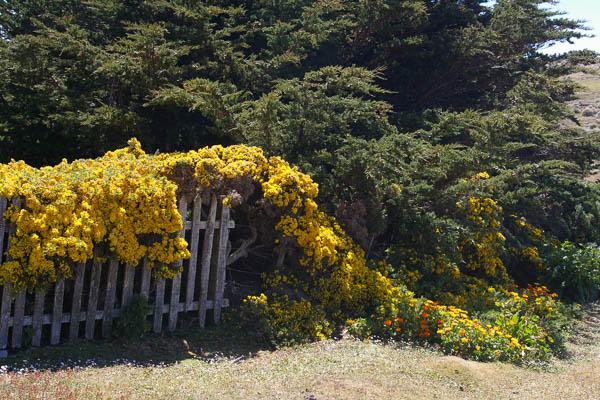 Sheltering trees and walls enabled a garden to thrive near the farmhouse. A produce garden keeps the family supplied with veggies, but the growing season is short. Argentine restrictions have limited food imports.

Non-native gorse has naturalized throughout the islands. Too bad the sheep don't eat the spiny stuff. 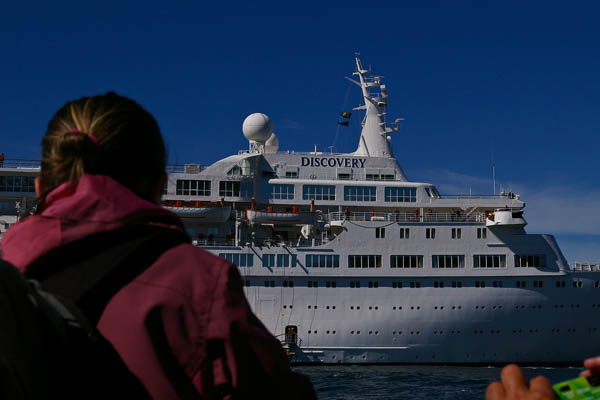 Returning to the ship after a delightful visit.