Jim's sister Grace and her husband Steve invited us down for their annual January escape to Key West. We enjoyed a relaxing few days with them and also doing some sight-seeing. 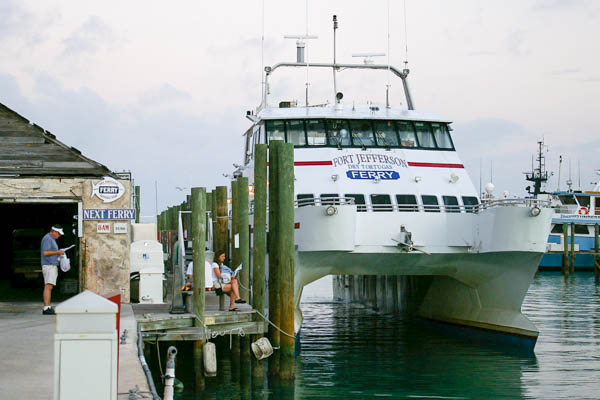 One day we rose before dawn for a catamaran trip to Fort Jefferson in the Dry Tortugas National Park. There were several options, but Grace & Steve recommended the "Yankee Freedom" because of the entertaining and informative guide, Cap'n Rick.

The Dry Tortugas are a cluster of islands about 70 miles west of Key West. They are called "Dry" because there is no fresh water to be found. "Tortugas" because of the once-abundant sea turtles.

The trip out was lovely -- blue skies (once the sun came up) and crystal clear water. 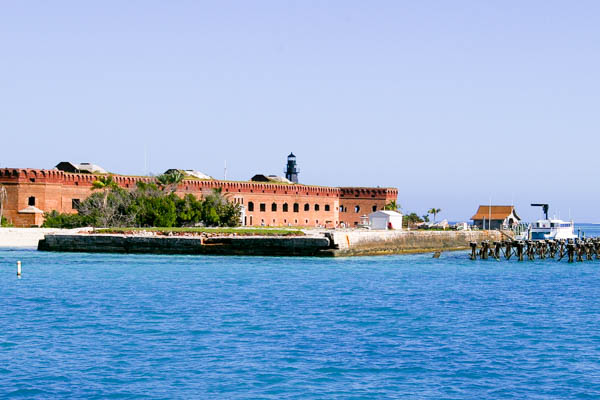 The fort was started in 1847, but never completely finished. It was designed to control the vital shipping lanes between the Atlantic and the Gulf of Mexico, but masonry forts such as this one were made obsolete by the development of rifled cannon. After the Civil War it was converted to a prison and used as such until 1874. Its most famous prisoner was Dr. Samuel Mudd, who was convicted for his role in the assassination of President Lincoln. He was pardoned in 1869 at least in part due to his assistance in treating those affected by a yellow fever epidemic at this fort in 1867. 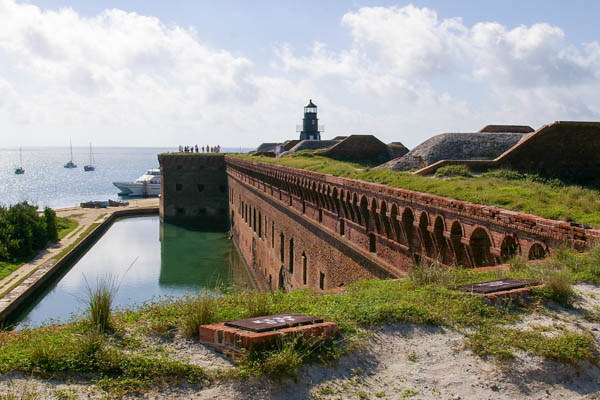 A moat and breakwaterfort encircled the fort. The lighthouse is no longer in operation. A newer one is located on a nearby key.

The low pyramids on the right are ammunition storage for the upper batteries.

The brick rectangles in the foreground are part of an ingenious, but ultimately unsuccessful, design for the capture and storage of fresh water. Rainwater captured by these "chimneys" funneled into large cisterns. Due to settling and other factors, the cisterns began to leak and allow salt water in. 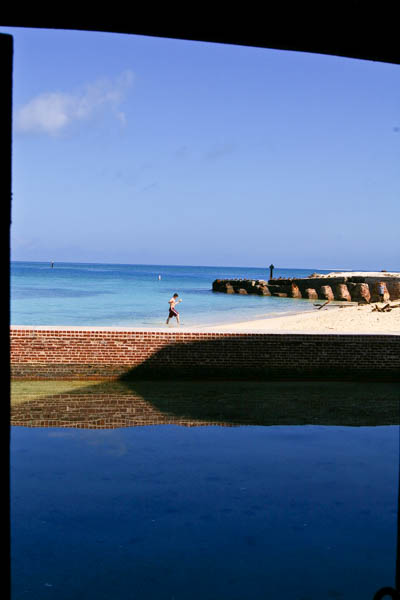 Cannon ports on all sides of the fort look out over the moat and breakwater. Campers and day-trippers hike in the area. 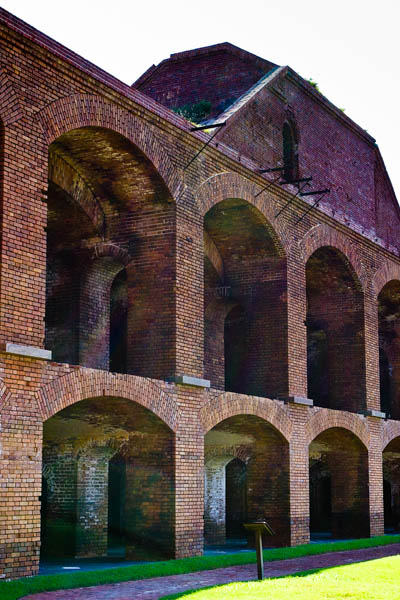 There were cannon emplacements planned for all three levels of the fort, but it was never fully armed. The structure on the upper level held ammunition. Brackets supported a wooden walkway leading to the ammo storage area. In theory those who were getting more ammunition were sheltered from fire. The fort was never attacked, however, so it is unknown how well this would have worked in practice.

The arches on the two lower levels are quite graceful. 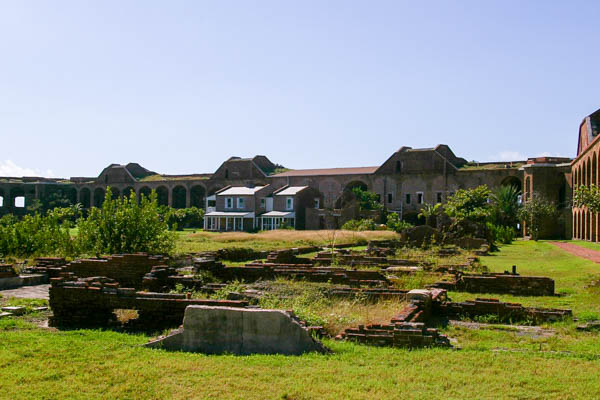 These foundation ruins are all that is left of the officers' quarters. Each officer had his own house. A few buildings have been restored for the use of Park Service personnel and may be seen in the background.

The barracks for the enlisted men were even less visible. 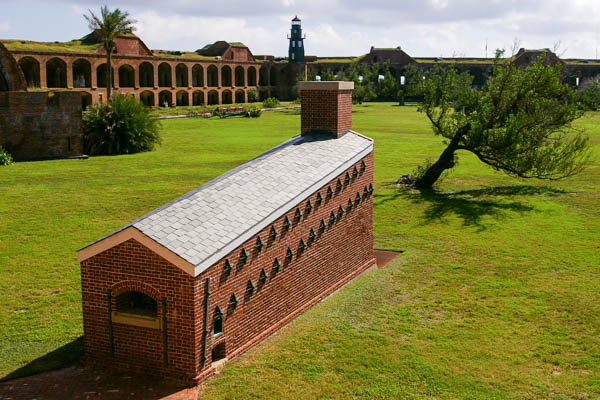 We were fascinated by this "hot shot furnace." Non-exploding cannon balls went in the far end and were red hot by the time they got to the exit. Their intended use was to set fire to enemy warships. I would not have wanted to be responsible for taking the hot cannon balls to the batteries, which were not especially nearby -- especially if an attack happened in the blistering heat of a Florida summer! 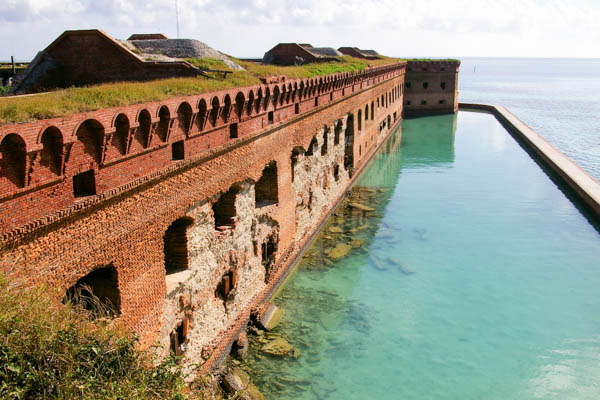 Hinged, wrought-iron shutters designed by General Joseph Totten were another of the many innovations used in Ft. Jefferson that didn't quite pan out. They opened automatically when a cannon was fired and immediately closed to protect the soldiers as they reloaded.

The iron, when exposed to the salt air, rusted and expanded, pushing out the exterior bricks.

Restoration efforts, ongoing at this site, are removing the original shutters and replacing them with materials that are both historically accurate and resistant to the elements.

This restored gun emplacement shows how the cannon would be mounted on a carriage that allowed it to recoil when fired. It was then reloaded and pushed into position for another shot.

The iron shutters discussed above covered the gun port to protect the artillery personnel. 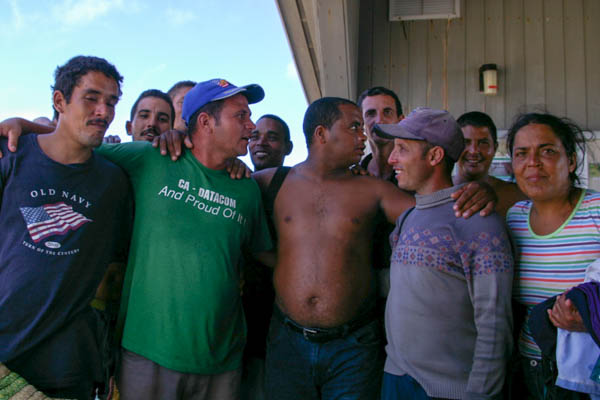 Since the Dry Tortugas are so far west of Key West, they are the closest US landfall to Cuba. This was brought home to us at Ft. Jefferson.

This party of Cuban refugees had successfully made the passage and landed on one of the nearby small islands. The Coast Guard fetched them to Ft. Jefferson where they would wait until they could be transported to an induction center elsewhere.

The policy vis a vis Cuban refugees is that if they have dry feet, or have successfully reached US soil, they may remain. Those who are intercepted at sea (wet feet) are returned to Cuba.

They saw my camera and insisted that I take their picture! 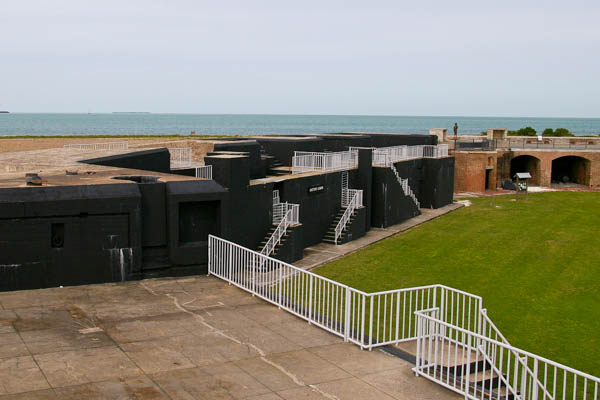 The Dry Tortugas expedition took the entire day. The next day we visited Fort Zachary Taylor on the Key West "mainland." It was constructed as a sister fort to Ft. Jefferson, but was heavily modified for the Spanish American war in the late 19th century.

The black structures were part of the modification. Ironically the newer parts of the fort are condemned as unsafe whereas the older sections are still sound. 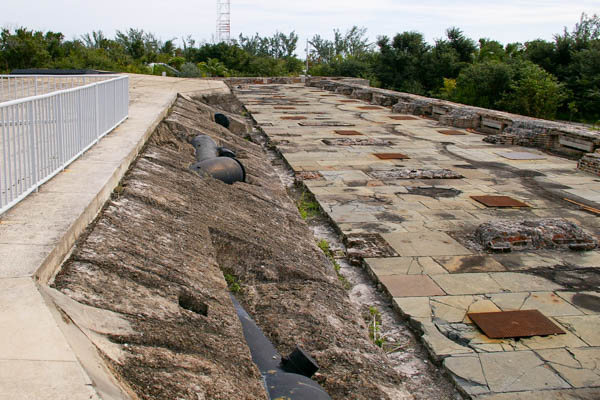 When newer batteries were added onto the existing fort, old Civil War vintage cannon, now obsolete and too heavy to move easily, were used as fill in the concrete extensions. As a result the fort has one of the largest collections of old cannon. A bit hard to get at, however. 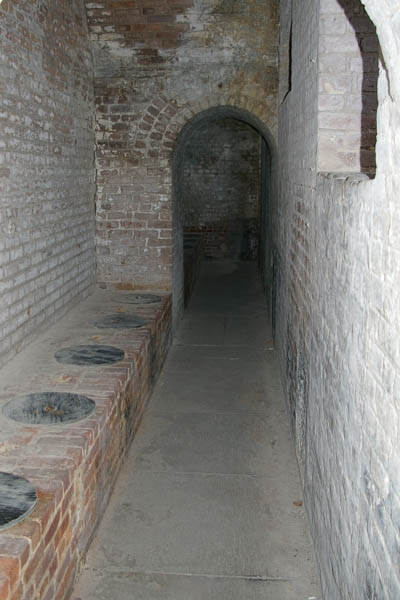 Another clever idea that didn't work was latrines flushed by tidal forces. The tides weren't strong enough to do the job and the latrines became breeding grounds for mosquitoes that carried yellow fever.

Also located at the "Fort Zach" park is a very popular beach. Neither Jim nor I are particularly fond of sun and surf, but we did spend a lovely morning there with Grace and Steve. It was a short bike ride from their rental house in the Truman Annex.

Also nearby is the Florida Keys Eco-Discovery Center. We spent a good bit of time there fascinated by the ecology of the area. 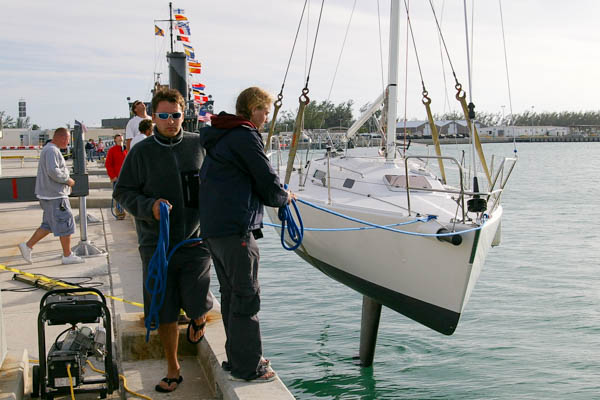 One of the annual January events at Key West is Race Week. It was the week after our stay there, but we enjoyed watching the racers gather with their boats. Some trailer in; some sail in. Competitors come from all over the world to race in the various divisions.

In addition jet-setters cruise in on their mega-yachts to be a part of the action. We saw several luxury ships docked nearby. 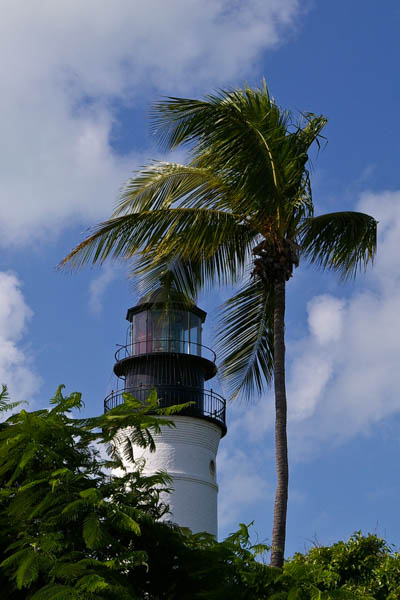 One day we took a walking tour of Key West with Grace and her family. The lighthouse is now a museum. 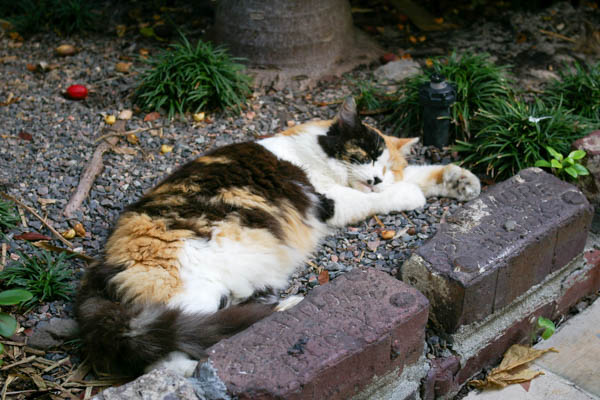 We toured the Hemingway house across the street. I didn't get good pictures of the house or grounds, so check out the link if you want to see what it looked like. It is preserved with the same furnishings that the Hemingways used. I couldn't resist, however, a picture of one of the famous polydactyl cats. She clearly doesn't mind the parade of tourists. 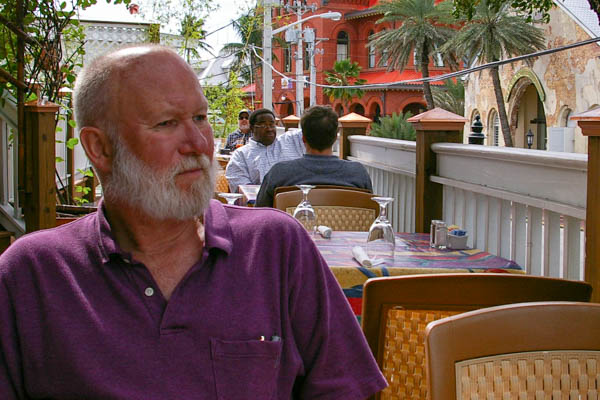 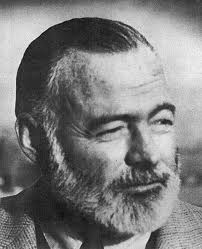 Speaking of Hemingway... At one point we were walking along and a group of ladies came running up to Jim full of giggles! "He's perfect!" they exclaimed. It turns out that they were participating in a "scavenger hunt" and one of the items was to locate someone who looked like Ernest Hemingway.

What do you think? Does Jim qualify? Personally I think Jim is better looking! 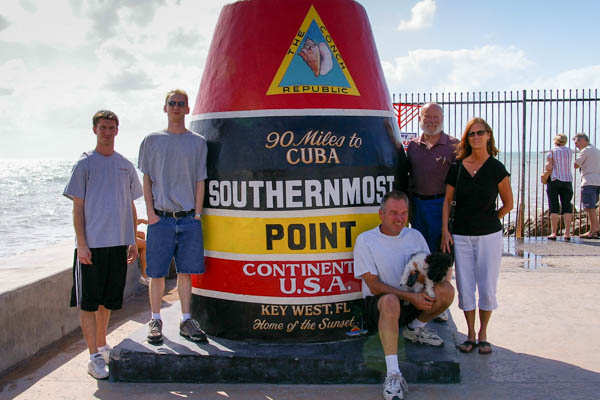 Another spot we visited was the "buoy" at the so-called Southernmost Point in the contiguous USA. There was a queue of tourists waiting to take each other's pictures. We are (L-R), Matt & Ben Janus, Grace's sons, Steve & Winnie, Jim, and Grace.

There are numerous "southernmost" sites in Key West. A little Presbyterian Church that I attend when there is the southernmost in the continental US. 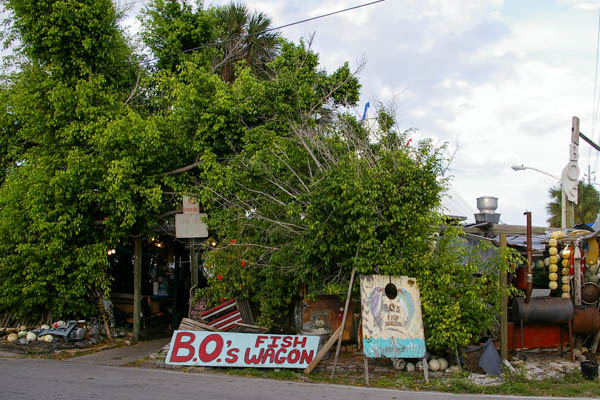 But what is a visit to Key West without a bit of bar crawling? Our favorite was BO's. The picture doesn't do it justice!

Another favorite was the Turtle Kraals. Every evening featured a turtle race.

And then there was the Green Parrot.

You get the picture!

Here we are at Happy Hour at some dive or the other down by the docks. L-R are Jim, Matt, Steve, Winnie, Grace & Ben. 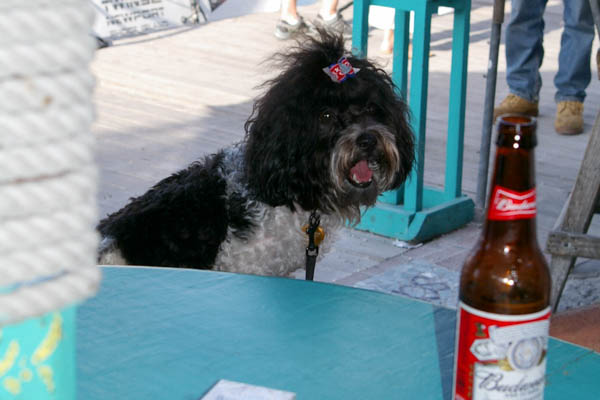 At the time of this visit Key West was pretty dog-friendly. Winnie could go just about anywhere that we could. In the intervening years (I'm finally getting these pictures online in 2012), that has been less so.

And lest PETA or some other such organization get on our case, no we didn't ply Winnie with beer or other intoxicating beverages!

Then there is the iconic sunset view from Mallory Square. We enjoyed our Key West visit, but mostly we enjoyed spending time with Grace and her family.